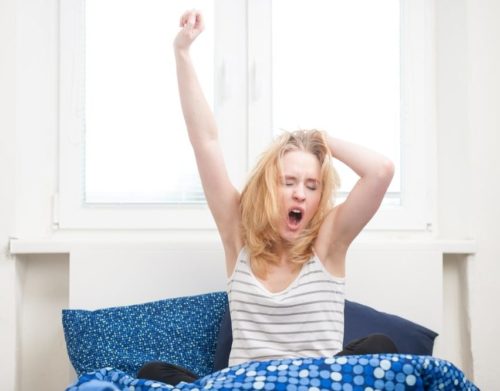 How to Describe Your Daily Routine in German: 10 Must-know Verbs

What’s the first thing you do when you get up in the morning?

Maybe you brush your teeth, put on the coffee or check the news.

Whatever it is, could you describe it in German?

There are a ton of interesting German verbs you can learn for talking about your daily routine, and mastering them is important whether you want to tell your friends a story about your day or need to explain to your boss why you’re late for work. But there’s another reason to learn them beyond vocabulary building.

The German words used to describe a daily routine carry some hidden grammar lessons that can seriously boost your language skills.

The goal of this post is to bring in some practical guidance on German verbs and grammar, using daily routine vocabulary as a vehicle.

We’ll provide some straightforward tutorials before diving into a rundown of essential daily routine verbs. Then we’ll bring it all together with an example daily routine.

So get up and get ready for a new day of German mastery!

Essential German Grammar You Can Learn from Your Daily Routine

Reflexive verbs are those that act on the subject itself. In English, this is demonstrated in the usage of the word “oneself.” For example: to look at oneself, to apply makeup on oneself, etc.

In German, the word “oneself” is equivalent to the word “sich.” So in the pure or infinitive form, the verbs that are reflexive would always have sich. If you look up the verb, the indication of sich in the infinitive is a clue that it’s reflexive.

When used in context, sich changes to respective reflexive components such as mich (myself), dich (yourself, informal), sich (himself, herself, itself, themselves or yourself, formal), uns (ourselves) or euch (yourselves).

The rasieren would get conjugated like a usual German verb. In effect, this is how it would look:

ich rasiere mich (I shave myself)

du rasierst dich (you shave yourself)

wir rasieren uns (we shave ourselves)

ihr rasiert euch (you all shave yourselves)

Understanding Accusative vs. Dative: Look for Body or Clothing Words

What are the akkusativ (accusative) and dativ (dative) cases in German?

A case in general defines the relationship between the subject and object in a sentence. If the object is a direct object (i.e. an action is being done to it) then it’s accusative. Common akkusativ verbs (verbs that require the accusative case, a.k.a. verbs that take direct objects) in German are haben (to have), trinken (to drink), essen (to eat) and sehen (to see).

When the verb makes the subject perform an indirect action, the sentence takes a dative case in German. For example:

Ich gebe meinem Bruder einen Kuli. (I give my brother a pen.)

Here, the subject is Ich (I), the direct object is meinem Bruder (my brother) because he’s receiving the pen, while Kuli (the pen) is the indirect object. Without the indirect object my sentence isn’t complete. Common dativ verbs in German are helfen (to help), danken (to thank), schicken (to send) and schenken (to gift/give as a gift).

Let’s look at an example from our daily routine for a clearer understanding:

Sich waschen (to wash oneself) alone would be accusative. The conjugation would work as follows:

sich waschen (to wash oneself)

ich wasche mich (I wash myself)

du wäschst dich (you wash yourself)

wir waschen uns (we wash ourselves)

ihr wascht euch (you all wash yourselves)

But if I were to say sich die Hände waschen (to wash one’s hands), this would be dative, as the body part Hände (hands) acts as an indirect object.

ihr wascht euch die Hände (you all wash your hands)

The similar case of deciding between the accusative and dative cases occurs with verbs that include a piece of clothing.

When there’s a piece of clothing included for verbs like sich anziehen (to dress), it becomes dative, as the piece of clothing acts as an indirect object. So “I wear a dress” becomes “Ich ziehe mir ein Kleid an.”

But if the piece of clothing weren’t present, it would turn into an accusative case, such as I dress myself (Ich ziehe mich an). Similar verbs that follow this pattern are sich umziehen (to change clothes) and sich ausziehen (to undress).

There are certain breakable verbs that play a fundamental role in describing your daily routine. Many of these verbs allow you to express your daily chores without involving too many words.

For example: if you consider the verb fernsehen (to watch television), it encapsulates the entire action of watching television, without actually having a separate word for “television” in it. The verb breaks into fern and sehen, where fern acts like a prefix and is placed usually at the end of the sentence.

The verb sehen (to see) takes the second place in the sentence, conjugated according to the subject depending on whether it’s ich (I), du (you), etc. It would look something like this:

The most common prefixes in breakable verbs are: an- (at, being, onward, on, toward, to), auf- (on, open, out, up, un-), vor– (before, forward, pre-, pro) and aus– (out, outward, extended, completely, missing). You could find most prefixes and their interpretations with examples here.

There are quite a few words in the daily routine that could be a mix of reflexive and breakable verbs. For example, let’s look at sich ausruhen (to relax/rest oneself).

ihr ruht euch aus (you all relax yourselves)

We now take a look at the top ten most commonly used grammar structures that a native German would use to describe his or her daily routine. Each word in the list below will be defined and its usage will be demonstrated with example sentences.

Since this is the content that native German speakers actually watch, you get the chance to experience how modern German is spoken in real life.

Here’s just a brief example of the variety of content you’ll find on FluentU:

Watching a fun video, but having trouble understanding it? FluentU helps you get comfortable with everyday German by combining all the benefits of complete immersion and native-level conversations with interactive subtitles.

This way, you get German immersion online without ever worrying about missing a word.

Just tap on any subtitled word to instantly see an in-context definition, usage examples and a memorable illustration to help you understand how the word is used. If you see an interesting word you don’t know, you can add it to your vocabulary list for later review.

Once you’ve watched a video, you can use FluentU’s quizzes to actively practice all the vocabulary in that video. Swipe left or right to see more examples of the word you’re on.

FluentU will even keep track of all the German words you’ve learned, then recommend videos and ask you questions based on what you already know. Plus, it’ll tell you exactly when it’s time for review. Now that’s a 100% personalized experience!

Whether you’re off to the mall, grocery shopping, a romantic dinner date or a visit to your sick aunt, and don’t want to give out too much detail, this is the perfect verb to use to indicate you’re going to be out of your nest!

Wir gehen heute Abend aus. (We are going out this evening.)

This verb can be used to say specifically that you’re taking a relaxing stroll in the park. This is a common daily routine activity among Germans, given many are physically active people who love nature.

Wir gehen täglich nach dem Mittagessen spazieren. (Every day we go for a walk after lunch.)

As you’ll notice, the complete activity has been fit into this handy verb. Without actually using the word “grocery” anywhere, it’s possible to explicitly convey the action of going to the supermarket and buying all that you need for your grub and your home!

Here you can notice how the verb can be used in a dative and accusative manner by including and excluding the body part, which is the teeth in this case.

6. Sich duschen (To Bathe Oneself)

This verb can also be used in a non-reflexive manner. I could also say “Ich dusche nicht täglich nicht im Winter,” giving “mich” a miss, and it would still not be wrong.

7. Sich rasieren (To Shave Oneself)

This is a classic case where all the three aspects come together—the reflexive nature along with it being breakable and by bringing in a piece of clothing (which is the jacket in this case), that acts as the indirect object, making it dative.

When the piece of clothing doesn’t come into the picture, it becomes an accusative sentence, making the action direct.

9. Sich schminken (To Apply Makeup on Oneself)

10. Sich ausruhen (To Relax Oneself)

Ich ruhe mich am Ende des Tages aus. (I relax at the end of the day.)

Let’s take a look at how daily routine vocabulary can be used in real life! Before we dive in, let’s go over a few “add-ons” necessary to hold everything together, some of which you saw demonstrated in the examples above.

Danach putze ich mir die Zähne. (After that I brush my teeth.)

Consider Susie’s routine. She’s one busy woman! Let’s take a look at her busy life that pulls the above concepts together:

Susie wakes up at 6:00. First she brushes her teeth and then takes a bath. Then, she has her breakfast and gets dressed. She goes out at 8 a.m. and does her grocery shopping at 9 a.m. After that she returns home and washes herself. She then applies makeup and leaves for a party at 8 p.m.

Phew! As you can see, learning your daily routine involves a lot of essential vocabulary and grammar. It’s hard work, but it’s worth the effort, as you get to express yourself commendably in German. There’s no other way around this nor some magical secret other than constant practice.

Incorporating this type of speech in conversations with your German friends or penpals would definitely be a good start to crack these grammar topics. So start right now, as it’s better late than never!