“Gone with the Wind.” Check.

Most of you should be able to check off all of Hollywood’s classics from a list of must-watch movies.

However, you might be missing out on the classic German films that are historical milestones of modern cinema.

When you want to combine your German practice with catching up on some classic films from throughout the ages, then your best bet is to check out some of these popular picks!

Watching classic movies counts as invaluable listening practice, so it’s strongly recommended that you add it to your list of ways to practice listening, along with tuning into radio stations, catching up with podcasts and relaxing with audiobooks.

Using films to brush up on your listening is effective because it exposes you to native speakers speaking as fast as they usually would with fellow natives. It’s not slowed down, like some of the German you’ll hear in class, but it also isn’t super fast at the same rate that some native speakers talk when they’re chatting amongst themselves.

Movies also have the added bonus of being able to be paused and rewound. If you didn’t quite catch something an actor said, you can always go back and see if you can get it the second time around. Beginners can also add English subtitles if they’re really struggling.

If you choose a super old movie, chances are it’ll be silent and subtitled. In these cases, you’ll be gaining extra points for German reading practice! Beginners, you can always pause a scene to take your time and read over the subtitles until you have a good understanding of the text. If it comes to it, you’ll have plenty of time to dig out a dictionary to look up any words!

Meanwhile, settle down and grab the popcorn… here are our picks for the best classic German movies!

8 Classic German Films to Teach You Language and Culture

Released in 1927, “Metropolis” is one of the most influential science fiction films of all time. The film was directed by the great Fritz Lang, an ingenious director who worked throughout the Weimar years and was well-known for making German Expressionist films.

The movie tells the tale of a boy from a privileged background who lives in a seemingly Utopian world. However, there’s a darker part of this world where the working class live. The boy grows up to become dedicated to helping those less well-off than himself. His father disapproves, and the boy’s new friendship with an authoritarian teacher only makes things between the father and son even worse.

“Metropolis” has become one of the best-loved German films of all time, gaining an undying cult following. It has been widely sampled, parodied, honored and quoted in pop culture. Even Queen used clips from the film in one of their music videos. It’s also one classic that no film student can neglect watching!

“Menschen am Sonntag” (People on Sunday)

“Menschen am Sonntag” (People on Sunday) is another film from the Weimar era, and it’s remarkable for a number of reasons.

Firstly, there isn’t really any plot to speak of—the film just follows a group of four friends as they head out for a lazy summer Sunday by the lake.

Secondly, there aren’t really any actors to speak of. Amateurs were cast in the film and, as a message tells the audience just before the credits roll, they all went back to their full time jobs as soon as filming wrapped.

The film went on to influence much of Italy’s post-war cinema as well as French New Wave, and also sparked the beginning of a 30-year collaboration in movies between producer Seymour Nebenzal and one of the writers, Billy Wilder.

One of the most internationally renowned films from German cinema, “Das Boot” (The Boat) is an epic movie that follows a German submarine and its crew as they patrol the Atlantic Ocean during World War II.

The film shows the excitement and extreme boredom that comes with being in a confined space during wartime. All of the interior shots were filmed with a special handheld camera to really drive home the feeling of claustrophobia. The film is an adaptation of a 1973 German novel of the same name, so if you’re ready for a new book to help with reading practice, look no further!

Another classic Weimar movie, this is one for all you lovers of horror. The grisly plot focuses on a mad hypnotist who uses an unsuspecting sleepwalker to commit horrific murders.

The script was written by Hans Janowitz and Carl Mayer, who used their experiences from World War I to inspire the story. There are many themes throughout the film and there has been plenty of theory written about it, most notably on how the film can be seen as a metaphor of how Germany subconsciously feels obedient towards figures of authority.

Dating way back to 1922, Nosferatu is an alternative take on Bram Stoker’s “Dracula” novel. Actually, it’s an unauthorized version of the book, as the movie studio could not get rights to the novel.

Many of the original names have been changed, although much of the plot still remains. If you’re after a super scary movie one night, this is the one for you—it’s rated the second best horror film of all time on Rotten Tomatoes!

This film from the 70s is all about Ali, a guest worker from Morocco, and his relationship with the widowed Emmi.

The eagle-eyed amongst you may have spotted that the German title of the film is actually grammatically incorrect—Angst essen Seele auf would translate as “fear eat soul up.” This mistake is used to reflect Ali’s broken German which he speaks throughout the film. For the title to be grammatically correct, it would have to read Angst isst Seele auf. But you knew that, right?!

One of Marlene Dietrich’s most well-known movies, “Der Blaue Engel” is from 1930. It’s a tragicomedy based on Heinrich Mann’s novel, “ProfessorUnrat” (Professor Garbage). 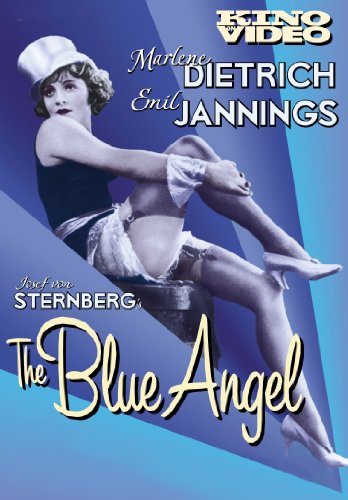 The cast and crew filmed a German and English version of the movie at the same time, though the German one is thought to be superior as the actors don’t struggle with their lines—something which is very visible in the English-language version.

In the film, we see a teacher visiting a cabaret bar attempting to catch some of his students there. Instead he ends up falling for Marlene Dietrich’s character who’s a dancer at the bar.

Intrigued? Check out the full film on Amazon.

Another movie directed by the internationally renowned Fritz Lang, this drama-thriller is all about a mass-murderer who preys on young children. He becomes the focus of a huge Berlin-wide manhunt, which is the main focus of the film. Lang considered this film to be one of his favorites and has commented that he made it as a warning for mothers, against them neglecting their children. Hollywood remade the movie in 1951, moving all of the action from Berlin to LA.

So there we have it—some of the best classic German-language films from the Weimar era up to the 1970s.

Now whenever you’re looking for a German film, you can always work your way through this list of the best films—black and white, silent or technicolor—from the golden age of German cinema!