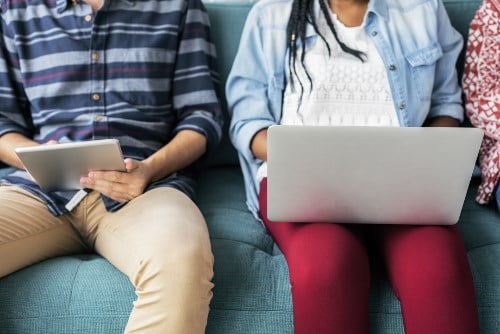 7 Resources That Make It Easy to Learn French with Videos

There are billions of views on YouTube videos every day.

If you haven’t checked out the best YouTube channels for learning French, you’d better do that right now.

There are many resources on the internet that use video to teach French.

Whether you’re trying to master irregular verbs or improve your listening comprehension, online video is one of the most effective ways to study French.

Better yet, match your French language learning videos with another piece of technology such as a conjugation app, and you’re a 21st-century French learner to be reckoned with!

Why Learn French with Videos?

Considering the number of views videos receive every day on the internet, it would be silly to ignore them as a great resource for learning French. There’s obviously more than enough French-language material out there to choose from. But it’s not a quantity over quality issue. Don’t let the big numbers fool you! These videos in and of themselves are a great way to learn French.

Videos are great for learning French because they allow learners to hear the French language how it’s actually spoken. You’ll see grammar constructions and vocabulary in action. It’s the next best thing to practicing French with an actual French speaker; you get to hear French “in the wild,” so to speak.

That being said, learners of French shouldn’t stop at just watching random videos in French every now and then. Consider choosing a French video course! French video courses and lessons combine the power of video with all the benefits of formal teaching: grammar and vocabulary explanations, a structured, logical flow.

What to Consider When Choosing French Videos for Learning

Check out the seven best places on the web to learn French with videos! These include resources that offer full French video courses (sometimes multiple), video libraries or a combination of the two, and they’re all awesome.

“French in Action” on Learner.org

Our first resource is an oldie but a goodie. In other words, it has stood the test of time. While the videos from the “French in Action” series date back to 1987, their wisdom and usefulness is timeless.

Made by Yale University, “French in Action” has 52 half-hour videos to get you speaking and learning French in no time. The course is aimed at those who have no previous knowledge of French, and it’s a great starting point for those who want a complete, in-depth look at French with the goal of becoming fluent one day in the language.

While the series is a little expensive and only the videos are available to watch for free, the videos themselves are a great way to see French spoken in video format as well as to get an in-depth look at French vocabulary and grammar. If you don’t want to purchase the whole program, meaning you don’t get the activities and in-depth grammar notes, this resource is still useful. I would suggest making your own notes along the way and then finding your own exercises or buying a textbook to complement the video course.

For those who don’t know, FluentU is an online program and fantastic app for tablets and phones that lets learners master the French language through the web’s best videos. This includes movie trailers, commercials and music videos. In essence, you’re learning French but getting your daily media fix at the same time!

Through the FluentU platform, subtitles allow learners to see translations on the screen itself, meaning that you can follow along as the video is playing. For each on-screen translation, FluentU offers in-context definitions and great examples.

After each video, you can access quizzes to test your comprehension of what the video was about. Since the videos progress in difficulty, this is a great way to study for all stages of French.

Start as a beginner and progress through the levels until you master the French language!

FluentU is available to use in your browser or in an app made for iOS or Android devices.

French I and French II on the Open Learning Initiative

The Open Learning Initiative offers two courses for beginners: French I and French II. The first course, French I, is entirely aimed at beginners with no previous knowledge of French, but the second, French II, is for more intermediate learners with a base in French.

Being based on a typical university or college French course, lessons for these two courses include videos as well as in-depth explanations of grammar and vocabulary, perhaps the most in-depth on this list—think of college-course in-depth. Like with any good college course, there are also multitudes of activities and comprehension quizzes to aid in retention.

Further, videos were shot on location in French-speaking regions such as France and Quebec. Best of all, the courses are free to independent learners, so you essentially get a college course in terms of quality without having to pay college fees!

Udemy is one of the best sites out there for finding courses delivered in video format, and French courses are no exception! Simply do a search for “French” and you’ll find pages and pages of courses (meaning hours and hours of video) uploaded by teachers that cover a range of French language levels and topics, from vocabulary to grammar to speaking, and much more.

For many of these courses, you have to pay, but they’re still very affordable for most budgets, with the majority currently being offered at around the $15 mark. If you can’t shell out any money for a French video course right now, do yourself a favor and still take a look. There are a few free courses available for French, including a course on French sentence structure and one that allows you to improve your listening and reading comprehension through stories.

You can preview any course before you start it. Once you sign up for a course, you’ll not only receive unlimited access to the video content (which you can view on mobile devices if you prefer) but any supplementary resources the teacher has made available.

With Udemy, what you’re getting is an ideal way to target your own learning needs. You can either start with a course for complete newbies or target a certain skill or weakness you want to work on.

This is a website that’s best suited to absolute beginners in French. Je French offers French videos for those who have never studied French before and especially for those looking to master a practical and basic knowledge of French conversation and conventions.

Each of the videos at Je French is clear, and instead of being a straight French conversation that learners have to then learn how to decipher, the videos teach you how to say and write the words and phrases. This is extremely beneficial for learners because mastering French is going to take more than just memorizing stock vocabulary—you want to be able to use it spontaneously too!

Lessons on Je French vary from greetings and grammatical gender to verbs and French written accents and are a fantastic way to build a base in the French language or to review the basics. Also, each video lesson has a grammar and vocabulary explanation to further assist you as you conquer the French language.

Francolab is a resource that’s best suited to those who have already studied French before and are at an intermediate level. The website for Francolab itself is in the French language, so learners already need a pretty well-established level in French to navigate it.

Firstly, Francolab hosts a numbers of videos on various topics all recorded in French. Such topics include things such as a mini-series on French legends and myths as well as Earth’s strangest and most interesting creatures. All the videos, which range from a couple minutes to around a half-hour long, include corresponding quizzes to test your understanding of the topics.

Further, each video has a helpful fiche (a “revision card” or “review card”) that gives more information on the topic of a given video as well as useful vocabulary and usage notes.

“The French Experience” and “Ma France” on the BBC

The BBC offers two online, video-based French courses: one for beginners, and another for intermediate or pre-intermediate learners.

This first video course offered by the BBC is aimed at beginner learners and is called “The French Experience.” Videos in this course focus on topics that range from getting around to eating out and to being at home.

Aside from the useful content in each video and the opportunity to grow vocabulary and grammar knowledge, the series offers transcripts to allow learners to see the French that’s being spoken. Furthermore, each video has a list of key language to learn so that learners can gauge what the most important takeaways for each lesson are.

For those who are perhaps intermediate or pre-intermediate learners, the BBC offers a second course called “Ma France” (My France). Each lesson in this course is based around an interactive video on a given topic, and each video has French and English transcripts. At the end of each video lesson, there’s a comprehension quiz to test your knowledge, and this is a great course to prime learners for a more advanced course later.

So, get out there.

14 French Prefixes for Taking the Lead with Your Learning
Suffixer-upper: 12 French Suffixes to Upgrade Your French