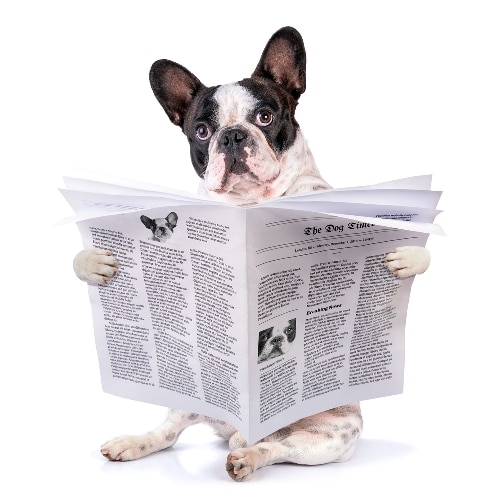 Extra! Extra! Read all about it!

Or listen all about it?

Watch all about it?

You get the picture. The headline here is that French news is a great way to immerse yourself in the language, especially if you want to learn online.

We all want to be well-informed, upright citizens of the planet, right?

Then let’s multitask here: Learn the ways of the world while getting some of the most authentic French learning around.

4 Ways to Learn French with News

Visual cues can be a vital component in getting the point of a French news story. For example, if you didn’t know what une inondation was, and they kept saying it over and over again, then it would be pretty helpful if there happened to be visuals of a flood scene. After that, other vocabulary words might click.

French news videos are a quick way to build vocabulary lists. Use your French dictionary app to find the vocabulary for the visuals you see. For example: If the videos or photos shown are of someone eating a plate of shrimp, and you don’t know the word for shrimp, then look up “shrimp”! You can get a nice list going this way. Then, go back and watch the video again, and you’ll be shocked at how much more you can understand.

Podcasts are a beautiful thing for French language learners. You can download them onto your phone, then play them in your car, as you’re horseback riding across the country or while making a four-foot-wide pizza. If you’re still a beginner, you probably already have your fair share of French learning podcasts on your phone, but it’s time to upgrade to more varied content!

Commit to tuning in to a short French news podcast every morning or a long one a few times a week. It’s an easy way to squeeze practice in, especially if you’re already familiar with world news.

Podcasts are also great supplements to reading or watching French news. Many French language learners struggle with listening comprehension, but don’t fret! Find a podcast on a topic you’re already well-versed in, listen along and try to catch a few words here and there. That’s enough to start yourself on the path to advanced listening comprehension. Don’t be afraid to replay or even check out News in Slow French to get your feet wet.

News articles are a good way to squeeze in an extra five or ten minutes of reading practice. While reading books in French is an essential component of becoming fluent, sometimes finding the time to commit to long form content can be a challenge. With print news, the concepts are often easy to wrap your head around and the reading material is short. Find a few news websites that you enjoy and challenge yourself to visit them every day!

Hot Tip: When reading on your phone or web browser, it’s easy to highlight words and look them up by right-clicking when you hit a snag.

Whether or not you’re a tweeter, or a Twitter user, it can be an invaluable resource to integrate French language into your social media routine. Following French celebrities, French news sites and other accounts will fill your Twitter feed with French content! Links and videos and jokes galore. For each of the news sources included below, I’ve also included their Twitter handle to get you started.

Le Point is like a French Time or Newsweek. So if that’s your thing, then subscribe yourself! Le Point specializes in political news, so if you’re trying to figure out the French political scene, it might be for you. Their YouTube channel has short video clips on a seemingly random array of topics (all making for interesting practice, of course), and their website is a great place for a serious French learner to read serious news articles.

You may have already perused the pages of Le Monde. It’s one of France’s most popular news sources, and for good reason. The name means “the world,” so it must be good, right? No, but really, it’s a great source for print news. They not only have a diverse choice of topics to read, but also a fantastic online magazine. Their website features videos and episodes from a bunch of cool series that include recipes from movies, math in the real world and animation, just to name a few. Their videos are also available on YouTube.

Perhaps you’re living in Paris and want some local news, or are merely interested in the happenings of one of the world’s greatest cities. Le Parisien, as the name suggests, covers local Parisian news, as well as national and international stories. And fun fact: It was started by the French underground during WWII’s German occupation of Paris. Plus, they have a women’s news website that covers women’s issues, beauty and fashion: La Parisienne. Don’t forget to check out their YouTube channel for some visual content to pair with your readings.

24 heures is one of the largest papers in circulation in… Switzerland! A large portion of the population there speaks French, in case you didn’t know. The paper doesn’t have a particular political affiliation, making it a great place to get a less biased view on the French-speaking world. If you’re interested in Swiss culture and what’s going on in their national news, then tune right in. Their website makes it easy to browse news locally, nationally, internationally or even sort through video content.

Le Figaro had humble beginnings as a 19th-century satire paper. Nowadays, it’s no joke: It’s the oldest running paper in France and one of the most respected publications in the world. With a center-right bend and a huge reader base, it’s a reliable source for news and French content. Prepare to get lost on their website: There are categories for everything from politics to culture, world news and style. While the main website is more print-heavy, check out Figaro TV for video news.

Okay, tell your ears to take a deep breath because Radio France boasts a lot of listening content. It is, after all, called Radio France. To start, they have three talk radio stations: France Inter, France Culture and France Info. Each station’s website allows you to listen live, but in addition to that bounty, there are tons of podcasts available on iTunes. I highly recommend checking out France Inter’s app and their range of podcasts on topics like science, politics and humor. Think NPR, but French.

Bonus: Radio France Internationale used to be a part of Radio France, but split off from it about 30 years ago. They’re a great resource for general news and are broadcasted around the world (much like the BBC). Follow them on Twitter: @RFI

Oh, Canada! How could we forget about you? Yes, it seems to be all about France most of the time, but don’t you dare forget about the French speakers in Québec! If your québecois is a little rusty, head on over to Le Journal de Québec. Written in more of a tabloid format, it’s a great site to get lighter stories from.

The website has a great layout, making it easy to jump from one topic to another. I personally enjoy their Spectacles section, where you can find news on movies, television and celebrities. There’s even a radio section! Use it as a tool to test your listening comprehension by reading the text, then listening to the audio clips to see how much you can understand. Check out Le Sac de Chips for podcasts, web series and quizzes.

RTBF stands for Radio Télévision Belge de la Communauté Française. Which means that it’s a great source for French videos, radio and exposure to Belgian culture! RTBF provides the public broadcasting for the French-speaking portions of Belgium, and offers six different radio stations for your listening pleasure. Their website is also a great source for news stories with a variety of topics, many of which include videos! And lucky for you, the Belgian accent isn’t tough to swallow at all.

Unfortunately, Anglophone news sources often glaze over news from Africa. If you’re interested in what’s going on in African countries, then BBC Afrique is a great option. Since French is used as an official language in many parts of Africa, BBC Afrique proves to be a great source for news and information across the continent. Listen to live radio directly from their website or peruse the news stories and videos.

France’s #1 most respected, totally accurate news source! Just kidding, it’s basically The Onion but in French. If you want a break from all of this real news, then I highly suggest spending some time laughing at their satirical headlines and articles. And they don’t stop with the print news: They have a whole section for videos that are absolutely hilarious. The humor is easy to understand if you’re well-versed in current events (which you should be from all of my previous suggestions!).

Need to really get away from it all? Satirical news not a good enough escape for you? Wait! You can still learn French and take a “hard news” vacation. AlloCiné is France’s biggest site for movie and television news. Their website is home to movie reviews, movie trailers, videos and, if you’re a real film buff, web series about cinema. Plus, it gives you plenty of suggestions for watching movies in French.

French news provides you with everything you need for French immersion: reading practice and listening comprehension.

Oh wait, there’s still getting, you know… speaking practice. And let’s not forget to hone our writing skills.

But at least you’ll be well-informed and ready to have complex conversations with French speakers about the happenings in the Francophone world. Everyone will be clamoring to be your language exchange partner!

Class Is in Session: The 16 Best Sites for Online French Courses
Feel Lost? A Map to the Similarities Between English and French