Need a break from the screens?

Sometimes after a long Netflix binge or vanquishing a video game, it’s nice to have a little fun the old fashioned way.

And it doesn’t get more old fashioned than card games—did you know people have been playing card games in France since the 1300s?

But just because something’s old fashioned doesn’t mean it’s boring. In fact, there are tons of cool, creative card games you can play in French these days, while also giving your language skills a fun boost.

Besides the fact that they’re just plain fun, there are several reasons card games can improve your French.

For starters, playing games gives you a memorable context in which to learn and remember French words and phrases. If rote memorization doesn’t work for you, turning your French studies into a game is a great alternative.

You’ll also be able to involve other French learners of different levels, so you can correct one another and expose one another to new vocabulary.

Moreover, when you’re in an environment where you’re playing with friends, you’re relaxed and have less pressure to speak with the perfect accent and grammar. This means you’re much more likely to talk freely and spontaneously, getting you out of your shell and helping you to speak French naturally in no time.

Card games in particular are super convenient for French practice. You can always carry around a small pack of cards so you’re ready whenever and wherever to learn and play.

Plus, there are tons of different types of French games so you’ll definitely never run out of new things to try.

Let the Fun Begin with These 5 Entertaining French Card Games

Below are five of the coolest French card games that are guaranteed to amuse and help you learn at the same time. 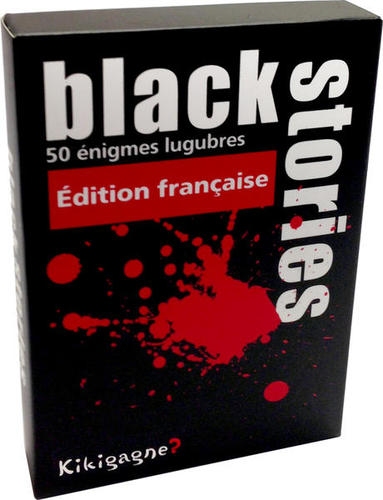 Black Stories: Édition française (French Edition) is a super fun French game that can be played with as little as two people or as big a group as you want.

The game comes with a pack of cards that each contain a front and back. On the front, everyone who’s playing will be able to see an image and a short, vague description (just a sentence or two) of an event.

Like its name implies, each event and story will be a bit dark, which only adds to the fun!

For example, a card might read something like, “Susan was found dead in the forest with nothing but an unlit matchstick.”

On the back of the card, one designated person (each round, choose someone different) will silently read the entire story explaining exactly what happened to bring about the event on the front of the card. Then, each player will take turns asking questions in French to the designated person as they try to figure out the enigma.

Play continues until someone has at last figured out the entire story and is able to tell it from start to finish, thus winning the game.

The difficulty is that you can only ask yes-or-no questions but the stories are quite elaborate and outlandish, often containing many different pieces to uncover.

The cool thing about Black Stories is that there are tons of different versions, such as cards with only science fiction, fantasy, cinema or music stories.

As such, you’ll never run out of exciting stories and you’ll gain exposure to endless amounts of good vocabulary!

Piquet is an extremely old French game that’s been popular in France since the 15th century.

The game is meant for two players and consists of six deals of 12 cards dealt to each player. It’s played with a normal deck of cards by removing all of the numbers from two through six, leaving you with 32 cards.

By discarding and drawing, players attempt to improve their hands by gaining certain sets and sequences of numbers, which each have a different value (similar to poker, for example).

Of course, the player with the best score after all six rounds wins the game.

All of the specific rules and card sequences can be found at Pagat.com.

One of the coolest things about Piquet is that the game retains tons of French phrases, ensuring that you’ll have plenty to practice while playing. For example, the six deals are called a partie (part) and a quatorze (fourteen) is four Aces, Kings, Queens or Jacks, which scores 14 points.

Plus, if you agree to speak in French for the duration of the game, you’ll get in some great language practice with this detailed card game! 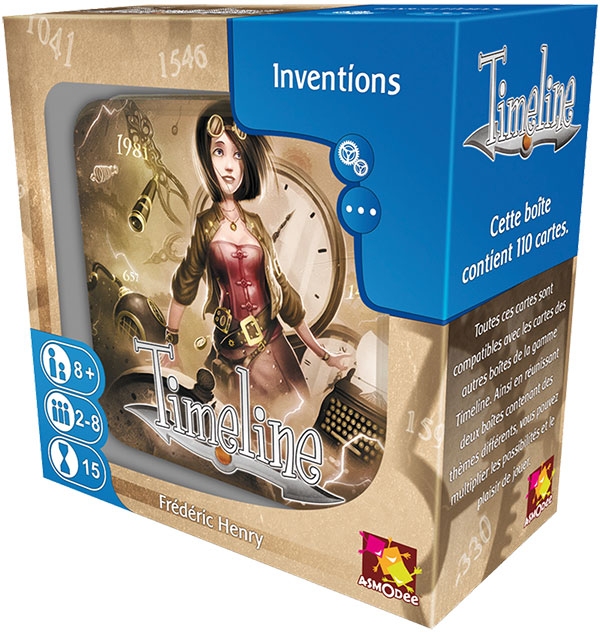 Timeline is a great way to learn French and history at the same time.

There are many different versions of this card game, each with a different theme such as inventions, French history, science, music and cinema or even “Star Wars!”

The goal of the game is to get rid of all your cards by putting them in the correct order by the date or time in which they occurred.

To explain how to play, I’ll use the example of the inventions-themed version.

Play starts with one card in the center of the table and four cards dealt to each player. The rest of the deck is placed on the side to be used as the draw pile.

Cards have a front and back to them, with the front containing the name and image of an invention (for example, a bottle opener) and the back containing the date of when the invention was created.

Each person’s four cards are laid out in front of them face-up so that no one can see the dates. The center card, however, is turned so that the date is visible to everyone.

Players take turns placing their cards in the center either before or after the others already there according to when they think the item was invented, thus creating a timeline.

Once you place your card where you believe it goes, flip it over and see if it was placed correctly or not according to the date. If you were correct, then you leave it there and have successfully gotten rid of one of your cards.

If you were incorrect, then place the card at the bottom of the draw pile and draw a new card.

Of course, as the game proceeds, it becomes harder and harder for you to divine where your card goes, since you’ll have more and more dates already added to the timeline and will have to be very precise with your guess!

Timeline is a great game for learning a huge variety of vocabulary and an excellent way to remember it as you’ll see both the French word and its image, which functions just like a flashcard. 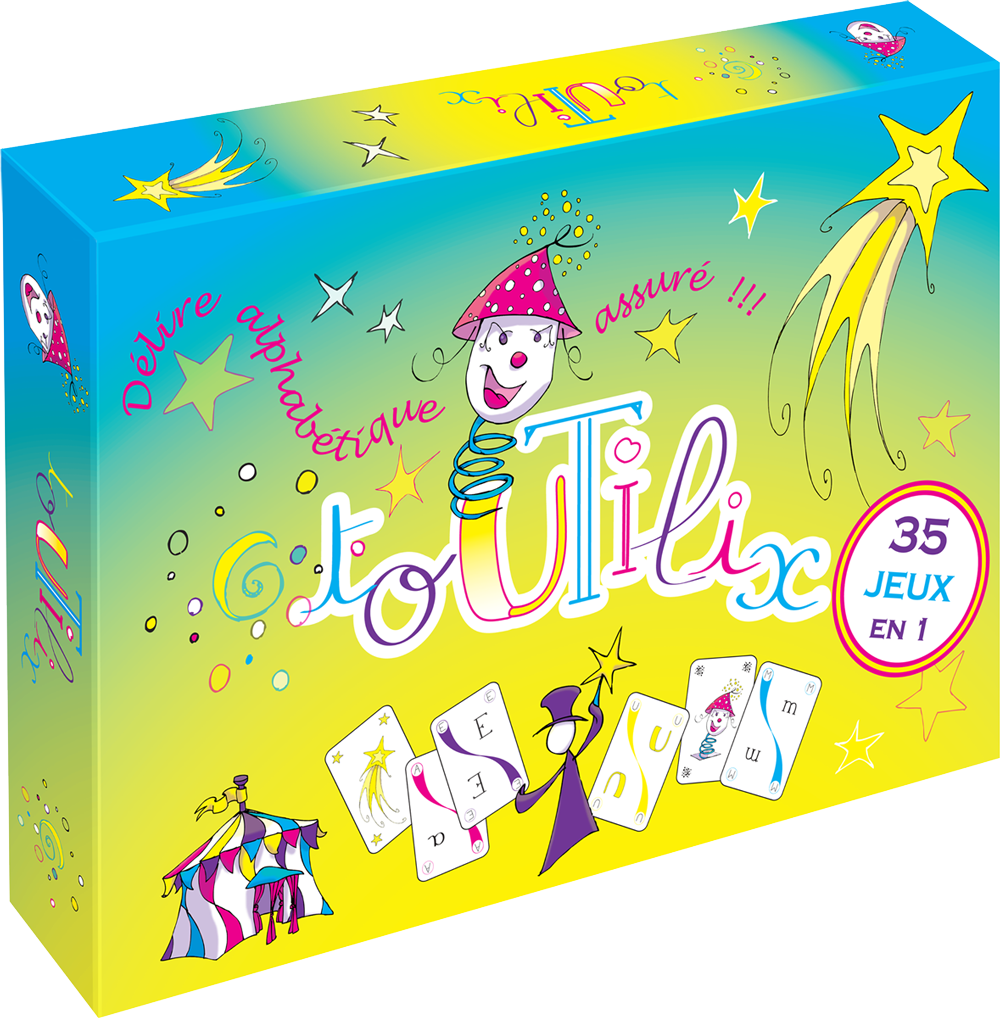 Toutilix is a truly fabulous game for French learners, as it revolves completely around inventing French phrases and words, with special attention to using correct grammar.

Toutilix is genius because, with just one deck of 110 cards (each contains a letter of the alphabet), you can play at least 35 different games at different levels, making it perfect for beginners, intermediate learners and expert French speakers alike! In each game, the principal is the same—to gain cards and construct phrases—but the way you do so varies from version to version.

The other cool thing about having so many playing choices is that there are games you can play alone or in groups of up to around eight players.

For example, an intermediate level game for at least two people would be to distribute seven cards, face-down, to each player and put one face-up in the center.

The first player draws their top card and must decide whether to put it before or after the center card in order to construct a complete French sentence with the two cards using their corresponding letters. So if the letters are G and S, you can say, Guillaume sourit (Guillaume smiles). For this particular version, the number of letters in each word doesn’t matter, as long as the words begin with the letters shown on the cards in play.

As play continues, it becomes harder and harder because you have to make sentences with many different words and letters!

It’s played in rounds, with the winner of each round—the one who played the most cards—gaining all of the cards in the center.

Once the entire deck has been used, whoever has the most cards wins. 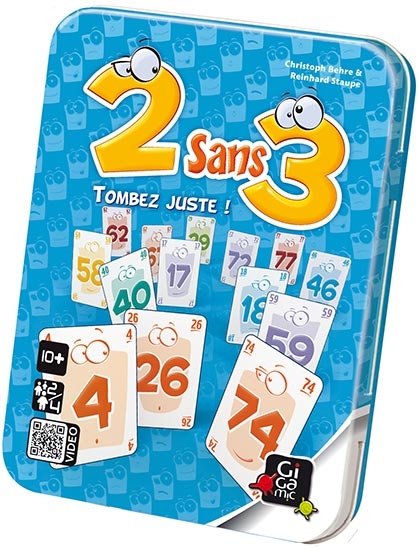 This is a simple but fun card game consisting of a deck of 98 cards, each containing a different color and number. Players must get rid of cards according to the ascending order of the numbers already in play.

The game consists of several rows of numbers on which to play, and whoever puts the fifth card on any row gains a card.

The goal is to gain points by getting two of each color and to avoid losing points by having three of any color.

Unlike the other card games, which focus somewhat on French words or letters, this card game will greatly help you practice your numbers if you say them in French each time that you put a card down.

Learning through play is an extremely enjoyable and effective way to brush up on your language skills. It’s time to have fun with one of the great French card games above!