But do you know how to put them together into phrases and sentences?

There are lots of ways to learn: Many websites have long lists of useful phrases for you to memorize, like this one or this other one.

But there are so many things there, it’s almost scary! How do you start?

We’ve told you before that reading, watching things and constantly practicing are great ways to learn.

But if you’re looking for a more fun and colorful way to learn English phrases, try this one: Read webcomics.

How to Learn English Phrases from Webcomics

All you need is your computer, tablet or phone, and you can access some fantastic comics.

Webcomics are great for learning commonly used English phrases because they’re almost completely made up of dialogue (people speaking to each other—or themselves).

Just reading a phrase in the comic is not enough though. Once you find a new phrase, try to listen for it in other conversations by the people around you, or even on TV.

Listen to how and when that phrase is used. Then try using it yourself.

1. Hyperbole and a Half

Hyperbole and a Half is a blog that uses silly illustrations to show the story that’s going on. The blogs here are about many topics, from hilarious stories about the blogger’s dumb dog to serious firsthand descriptions of issues like depression.

Even though there isn’t as much dialogue here as in the other webcomics, the blog is written in a friendly and conversational way and uses many useful English phrases.

In case you’re wondering, a hyperbole is a very big exaggeration, the kind you know isn’t really true. For example, you might say a dog is big but if you use a hyperbole, “that dog was bigger than two school buses stacked on top of one another.”

Sample phrase: “There was nothing I could do.”

You use this phrase when you have no options or no choices. It’s usually said in a sad tone, when you want to do something but can’t. In this example, the young girl wants to save her favorite dinosaur costume but she can’t, so she says, “there was nothing I could do.”

Where else you can find it: The Leona Lewis song “The Best You Never Had” uses this phrase to say that the singer was in love and had no choice in this.

This comic is also a little different from other webcomics. It uses a similar art style as Hyperbole and a Half but focuses more on art than writing blogs. There isn’t as much dialogue here either, but it makes up for it with extremely colorful images and a huge variety of comics.

There are silly comics about cats and dinosaurs. There are interesting comics about cool animals like the Mantis Shrimp. There’s even an entire section about grammar that provides easy-to-understand guides for difficult English topics like how to use an apostrophe and how to correctly use the word literally in a sentence. 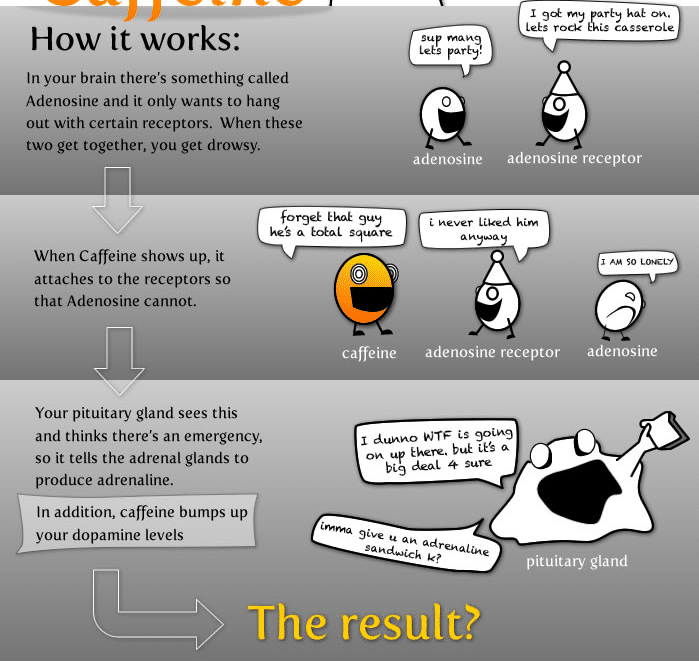 A bit of a warning: this comic often discusses mature topics (topics appropriate for adults only) and uses crude (rude, vulgar) language. If this offends you, move on to the next comic! If you decide to use this one, you’ll also learn how to curse (use swear words) like a professional.

This is usually said as “forget it” or “forget about it.” It means don’t worry about it. Listen to the tone of voice of whoever is saying this, though—“forget it” can also mean that the person is angry and just doesn’t want to talk about the topic anymore.

In this comic, “forget that guy” means that the guy they’re talking about isn’t very important. The person who said the phrase wants to ignore “that guy” because he is lame (boring, not cool).

Where else you can find it: The line “forget it, Jake, it’s Chinatown” is a famous ending line from the movie “Chinatown.” It sums up, in one line, how terrible the state of the world is. They’re saying that everything is so horrible that it’s not even worth thinking about the bad things that happened.

It uses the same few drawings over and over again. The beauty of this comic is in the dialogue. The language can be a bit difficult to understand, and the topics can get pretty philosophical and thought-provoking. 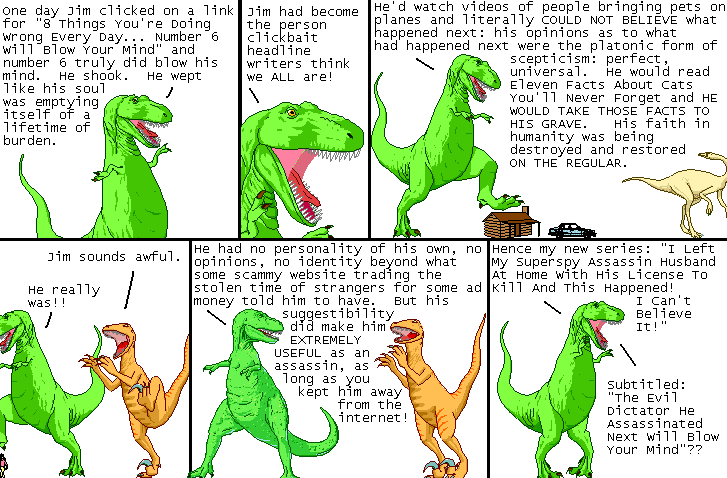 The conversations in the comics are great for discovering interesting phrases and some more academic language, if you can understand the slightly more advanced English writing style.

Sample phrase: “This will blow your mind.”

This phrase means that something is so crazy you’ll have trouble believing it.

The comic is using this phrase to make fun of “clickbait” articles. These are articles you find online that have titles that tell you very little about the content so that you’ll want to click and read more.

You can use this phrase for anything extraordinary or very awesome. Is this blog post blowing your mind with its awesome English learning tips?

Where else you can find it: Here’s one of those article titles that the comic was joking about. 50 AMAZING Facts to Blow Your Mind. They’re pretty cool facts, actually.

Here’s another one with ideas that will blow your mind. This phrase isn’t only used in online article and video titles, of course! Here’s a song called Blow Your Mind.

Meet the doctor…who’s also a ninja! 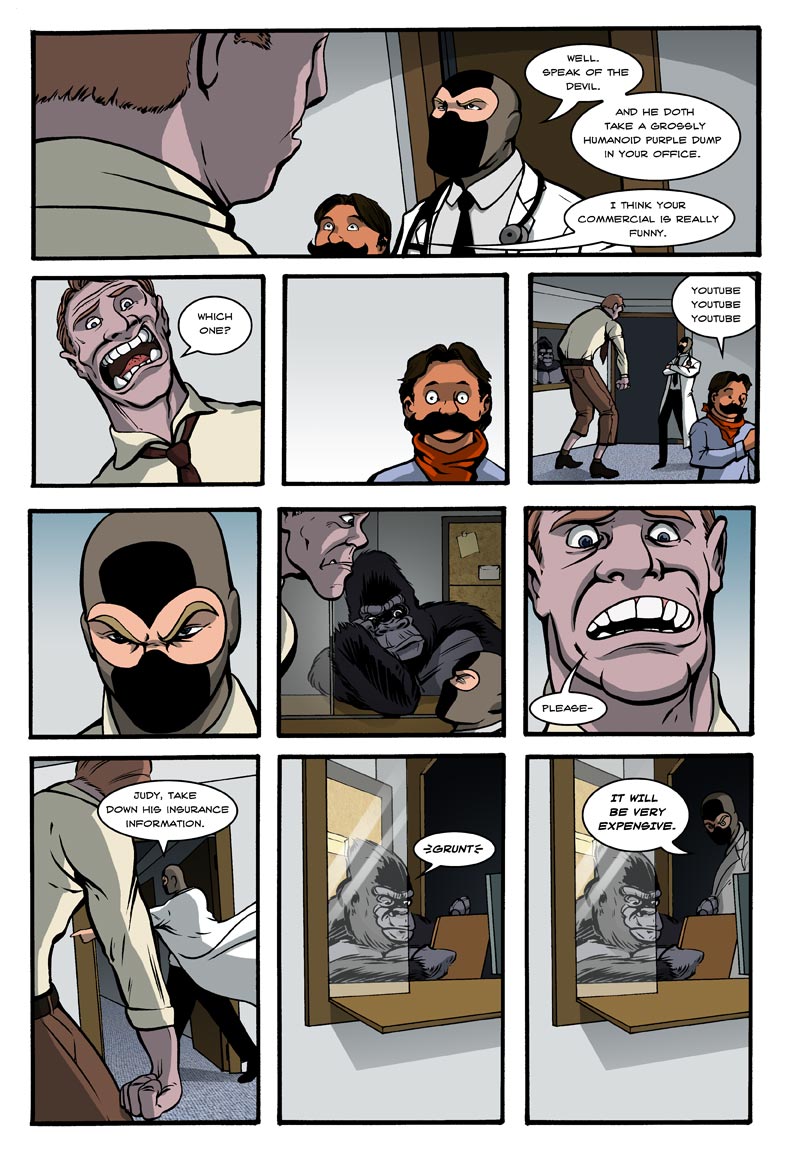 Dr. McNinja has crazy action scenes and even crazier characters. The ninja doctor fights crazy bad guys—like, for instance, a giant lumberjack—with his friend, the Mexican guy with a mustache who rides a dinosaur. His medical office’s receptionist is a gorilla. This is the kind of silliness you’ll find in this comic.

It’s beautifully drawn and takes you on a really fun, insane adventure.

Sample phrase: “Speak of the devil.”

If you were just talking about someone and then they walked into the room, you might say “speak of the devil.”

While it says “devil,” this isn’t necessarily a negative statement. It’s just another way of saying “hey, we were just talking about you!”

Dr. McNinja isn’t the only unusual doctor in webcomics. Meet Doctor Cat, the cutest doctor you’ll ever have. 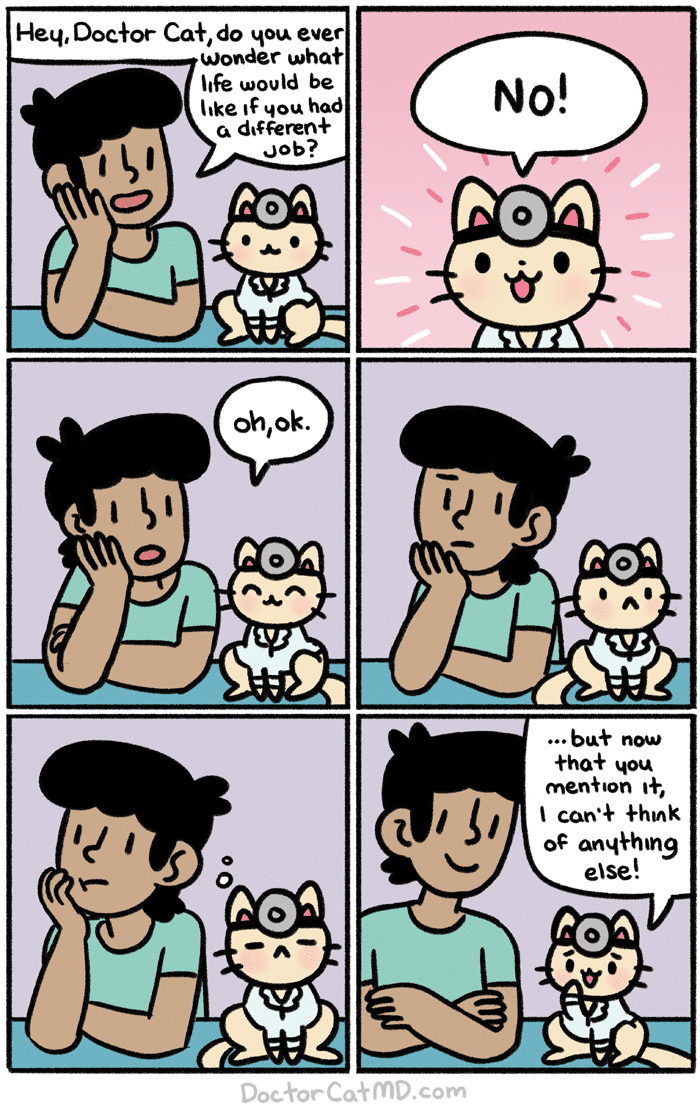 He might not have thumbs, but he can still perform a difficult surgery while playing with his mouse toy. A doctor’s bad news is easier to handle when it comes from an adorable kitty.

Sample phrase: “Now that you mention it…”

When a person says something and it makes you remember something, you use the phrase “Now that you mention it.”

It can mean that you weren’t thinking about the topic, but now you remember something about it because another person reminded you.

For example, if someone says “Have you seen my cat anywhere?” you might stop and think, then say “now that you mention it, I haven’t seen him.”

Where else you can find it: Sometimes this phrase is used to make a joke, like in this image. In this case, the phrase is used sarcastically, pointing out something obvious (that the man is probably more bothered by his face peeling off than by wearing contacts).

Girls With Slingshots is what’s called a “slice of life” webcomic.

It shows the adventures of two young women as they struggle to make it (succeed) in the world after college, making many friends along the way. As the comic evolves, you get to see them grow up, little by little. In the later comics, you even get to see their friends grow up, have relationships and marry.

The comic uses a lot of sarcasm and talks about some serious life issues, but it always does so with a humorous tone. The language here is very conversational, and the comics have a lot of English phrases in the dialogue.

Sample phrase: “Thanks for stepping up to bat.”

This phrase is a way to express your thanks when someone does something to help. By saying it, you’re telling the person that you appreciate their help. You can also say “Thanks for stepping up” and “Thanks for stepping up to plate”—all phrases having to do with baseball. In this comic, Jameson is thanking Angel for helping him with his coffee shop while he’s gone.

Where else you can find it: Online, the phrase is used a lot to thank a group of people for helping a cause or a company by donating or contributing in some other way. This is just one example where you can see variations of the phrase in use.

This comic is about three friends who are “less than perfect people.” Wayne is a normal—but somewhat wimpy (weak)—guy, Frank might be an evil genius and Guy is a mean girl. The comics show them in situations that are typical—trying to write a book, getting along with others—and some that are much weirder, like robots and cloning.

Guy and Wayne speak in a conversational way and use a lot of English phrases, but Frank has a very peculiar (strange) way of talking. His speech might be a little harder to understand than that of the other two.

Sample phrase: “There is nothing to be concerned about.”

It means “Don’t worry!” Another, less formal way of saying the same thing is “Don’t sweat it.”

You’d use this phrase if you’re trying to keep somebody calm, or if you want them to know that everything is okay. In the comic, Frank tells Wayne that blood coming down the walls is “nothing to be concerned about” (because Frank is really strange, and things like this are normal when he’s around).

Where else you can find it: You can see this phrase in an excerpt from See Jane Run by Joy Fielding. Here it’s actually used as a way to deny that something is wrong. Sometimes when a person says “don’t worry,” the first thing you do is start to worry!

Stick in the Mud is what everyone calls the main character’s bar. Rod’s bar is not a normal bar—some of the people who hang out there aren’t really people at all. It’s a comic about good drinks, strange monsters and a guy just trying to live his life and get over his ex-girlfriend.

Sample phrase: “Stick in the mud.”

Yes, the name of the comic is actually a phrase! A stick in the mud is someone who doesn’t like trying new or exciting things. Rod might own a bar for monsters, but he’s a stick in the mud for not wanting to actually have fun with it.

Where else you can find it: In the Disney movie “The Princess and the Frog,” the frog calls the princess a stick in the mud. He also calls her a killjoy. Both those terms are ways of saying that she doesn’t know how to have fun, and that she ruins the fun for others because of this.

There are hundreds of other webcomics online (you can find a nice long list here) but these 8 are a good place to start. Have fun!