The 8 Best American Movies for English Learners (with Subtitles!)

Want to give your English the red carpet treatment?

We’ve got eight popular Hollywood hits that can improve your language skills.

They all have English subtitles so you can follow along with the conversation and pick up new vocabulary words as you watch.

You’ll feel like an American star in no time!

The Best Way to Learn Words While Watching Movies

Watching movies is a great way to improve your listening skills, build your vocabulary and learn how to speak naturally. But it’s important to do it right.

One mistake that many English students make is that they don’t actually make the movie a learning experience. Instead, they sit back and watch the movie the same way they watch movies in their own language.

Learning English with movies requires you to be actively engaged. Pay attention to the subtitles while you watch. Keep a notebook nearby so you can pause the video and note any new words and expressions you come across. Once you’ve finished the movie, use your English dictionary or mobile app to look up the definitions of the words and expressions you wrote down in your notebook.

Shorter videos are a convenient and quick way to get some listening and vocabulary practice, especially if you’re feeling overwhelmed by the idea of watching a whole movie in English.

You should also make a brief note mentioning the scene when you write down words and phrases. That makes it easier to go back to that part of the movie and replay the scene. The more you watch the scene, the more easily you can understand the context the phrases were used in, and also practice listen-and-repeat exercises of your own.

Once you’re feeling confident enough to watch a movie in English, then this list will help you pick something you’ll enjoy.

If this sounds like a lot of work, FluentU was designed to make the process easier so you can focus on learning.

FluentU presents authentic videos (that’s the kind that native English speakers watch, like shows, movies and even commercials) with interactive subtitles, flashcards with audio and video elements, quizzes that test your vocabulary knowledge and other learning tools.

The program was created so you can watch a video like this scene from “The Pursuit of Happyness,” starring actor Will Smith, and easily learn English vocabulary and phrases from it. 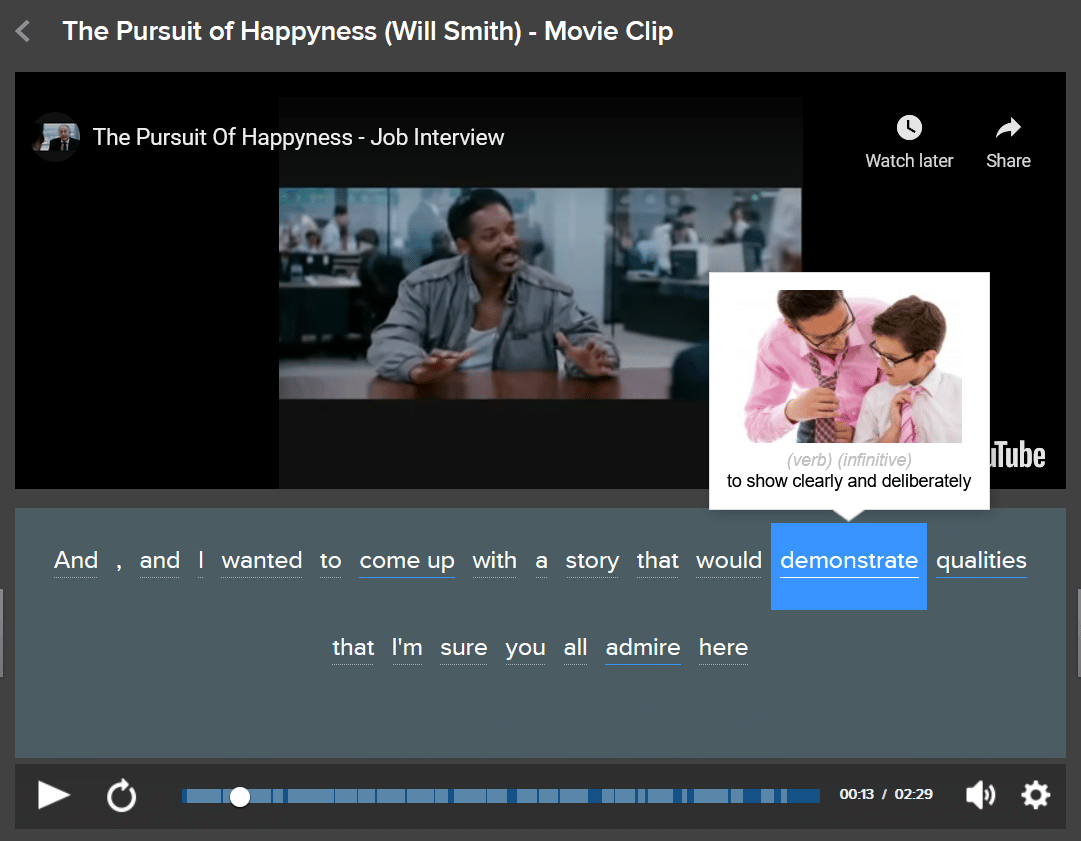 What’s more, the videos on FluentU are organized by genre and learning level so it’s easy to find ones that work for you. Just click “clips” and “trailers” to easily find videos from movies such as “Inside Out” or “X-Men,” among many others.

You can get FluentU for your iOS or Android device, or simply visit the FluentU website and use the program in your browser.

Now that you’re prepared to learn English from movies, let’s look at some popular films that are great for increasing your vocabulary and improving your conversational skills.

Each video has a link to a subtitled copy of the movie that you can rent (use for a short period of time) or buy.

Oh, and as a fair warning, the video clips we’ve included contain some spoilers that could reveal the storyline of the movies if you haven’t seen them yet.

“Forrest Gump” is excellent for learning American English. The movie touches on everything from casual life in the U.S. to American politics during the Cold War between the U.S. and the Soviet Union.

In this clip, we see a conversation between Forrest and his mother where they talk about life, death and destiny. Forrest asks his mother what his destiny is. He wants to know what his purpose in life is and how he should live his life. His mom tells him that he needs to figure out his own destiny and that he’s in control of his own future.

The scene also has the expression, “Life is like a box of chocolates. You never know what you’re going to get.” This expression actually became popular because of “Forrest Gump.” American English speakers use it to say that everything that happens in life is unexpected.

“Fight Club” brings philosophy, mental health and social issues into a movie about guys fighting. It gives English students a lot of topics to learn about.

In this popular speech by the character Tyler Durden, we can explore purpose, the meaning of life and again, destiny. Unlike the “Forrest Gump” clip, this speech talks about how people waste their lives doing things they don’t want to do.

The character even refers to himself and his friends as “the middle children of history,” meaning their generation (people in their age group) hasn’t had any important achievements or fought important battles like their parents and grandparents.

“The Departed” is a crime drama about police and gangsters in the American state of Massachusetts. Not only is it an exciting movie to watch, it involves a lot of slang, insults and words used by police officers.

In this video clip, we see Leonardo DiCaprio’s character meet a psychologist to talk about the stress of being an undercover cop (a police officer that pretends to be a criminal). The character mentions that his “heart rate is jacked” but his hand is steady. By calling his heart rate “jacked,” he’s saying that his heart is beating extremely fast.

Director Quentin Tarantino is known for bringing natural conversations into his movies, and “Reservoir Dogs” is no exception. The movie brings the perfect mixture of casual dialogues with slang, insults and crime-related vocabulary.

One of the most popular scenes from “Reservoir Dogs” is the tipping scene. When asked to cough up some green (pay/give some money) for the tip on a restaurant bill, everyone but Mr. Pink agrees to pay. Afterward, the group debates whether it’s right or wrong to leave a tip at restaurants.

“Vanilla Sky” helps English students talk about business and mental health. Plus, it has an unusual storyline that’ll keep you guessing what happens next.

This video clip involves the main character, played by Tom Cruise, talking to a group of doctors that are helping him recover from a major accident. In this scene, Tom Cruise is given a facial prosthetic, or mask that he’s supposed to wear.

The word facial refers to the face. Prosthetics are artificial body parts, including arms and legs, worn by people who’ve been seriously injured and have lost those body parts.

“The Wolf of Wall Street”

This scene from the movie is great at showing cultural differences between American and European business practices. The main character, played by Leonardo DiCaprio, wants to talk about banking laws in Switzerland. But the Swiss don’t want to talk about business until they’ve had a casual conversation—referred to as chit-chat—beforehand.

In the video clip, the character also mentions that he needs a rat hole. In American business, a rat hole is somewhere companies can hide money so the government can’t find it.

“Groundhog Day” is a strange movie about a guy who’s re-living the same day over and over. The movie starts out with casual conversations about day-to-day life, such as talking about work or meeting old friends. But as you get further into the movie, the conversations start becoming more about philosophy.

In this video clip, the main character, played by Bill Murray, refers to himself as a god after explaining to his coworker that he keeps experiencing the same day. He even calls himself immortal, meaning he can’t die, after explaining how he’s been stabbed, shot and even poisoned but has never died.

“Dead Poets Society” is one of the best movies for building advanced vocabulary. This movie is about a dedicated teacher and a group of private school students, and it uses academic English to talk about English literature and education as a whole.

“Dead Poets Society” has one of the most popular movie scenes of all time, where the teacher, played by Robin Williams, tells his students to seize the day, or make the most of life before it ends.

As you can see, watching American movies with English subtitles can be an educational experience.

Next time you feel like you need a break from your ESL textbook, grab a bowl of popcorn and watch a good movie instead.