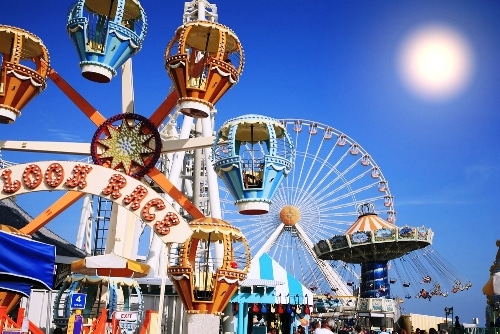 Imagine this: Your class is fully engaged and active, each student completely dedicated to learning the day’s lesson.

Once the lesson is over, many of them don’t want to leave!

It’s as if they were at an amusement park.

In fact, they’re eagerly awaiting what’s to come in your class the following day.

Not if you incorporate Spanish grammar games into your teaching strategies. If you’ve never tried spicing up the curriculum with a game or two, here’s what you’ve been missing.

Why Teach Spanish Verbs with Games?

Everybody likes games. However, that’s not reason enough to bring games into the classroom.

What does justify adding Spanish verb games to your lessons is the fact that they bring learning to life for your students. When compared to filling out tedious conjugation charts or learning verbs out of a textbook, games make learning Spanish meaningful and useful—and incredibly engaging.

Which do you think will have a bigger impact on students: having to complete yet another fill-in-the-blank statement, or trying to come up with the correct answer so that their team can win a class-wide contest?

Students will be more motivated to learn when they feel that learning has an immediate effect, even if it’s just in a fun little game. They’ll also be forced to think on their feet–and that’s a skill that comes in handy at test time and beyond.

Okay, so you’re convinced that games are useful, but what games should you play?

Materials: Four desks positioned around the room (these are your bases), a fitted baseball cap (or small bucket), strips of paper with verbs and/or verb tenses/moods of varying difficulty, a die

Baseball is the quintessential American sport, but it’s also a great game to learn Spanish.

Getting started is easy. Set up your classroom so that you have four desks in a diamond shape (these four desks will serve as your bases). Divide your class into two teams, and pick one to be the batting team and the other to be the fielding team to start. With the teams and playing field in place, it’s time to play ball!

The game starts off with the first person on the “batting” team rolling the die. The number they roll corresponds to the type of hit they’ll get if they answer the chosen question correctly.

If they roll a one, a right answer is worth a single. A two is a double, a three is a triple and a four is a home run (if students roll a five or a six, they roll again).

Now that the die has been rolled, the batter must randomly pick a question out of the cap, and then give it to you, the teacher/head umpire. Once you ask the batter the question, the “ball” is in play. If they get the question right, it’s a base hit and they get to move to the base that corresponds to their roll.

Every time a student makes it back to home plate, it’s a run for the batting team. After every three outs, the teams switch sides. Once the game is over, simply tally up the runs to find your winner.

Materials: Pen, paper for each student and four index cards per student or pair

In this game, students can work by themselves or with a partner. They’re going to be forming sentences while racing against the clock.

Start the timer so that the students have just one minute to write as many sentences as they can using the subject, the correct verb form and any additional information. The student or team with the most correct sentences wins.

This game encourages proper sentence writing, and can help your students learn to form more compound, and even complex sentences.

To get started playing Bazinga!, divide your class into two teams. Write the name of each student on index cards and put them in the baseball cap. Each round, you’ll pick one name out of the hat for each team.

The selected student for each team answers one verb-related question per round. These questions could require a conjugation, sentence completion or a complete answer. If they get it right, they get a point and a Bazinga! card, and if they get it wrong, the other team has a chance to steal.

Here’s the fun part: the Bazinga! cards are divided into three categories. These are:

As you could probably guess, the team with the most points at the end of the game is the winner.

Materials: Playing board (created by you) and verb cards

Spanish Verb Lotto is great for recapping and reviewing verb tenses and moods.

You hand each student one of the custom playing boards and a pile of cards. They then spread these cards out face-down in front of them.

Once you say “go,” players randomly draw cards. The first player to get three different cards for each verb tense wins.

In Dice Tic Tac Toe, each group gets a die and a worksheet. Each space in the tic-tac-toe board should have a different subject or verb definition. Every board will correspond with a number and a verb (give them a list so they know which number goes with which verb).

The first student rolls the die, and chooses a subject that corresponds with the roll. For example, if they roll a three, they pick a subject off the third tic-tac-toe board.

They then conjugate the verb on a piece of paper and hand it to their partner. If they’re right, they get to mark that space with an X or an O. If they’re wrong, the spot remains open.

Each student takes turns like this until all the boards have a tic-tac-toe on them.

Materials: Crumpled up paper balls or Nerf balls and an empty basket

This is another verb review game that students will love!

To get started playing Verb Ball, you’ll need to divide the class into two teams. Set one team at the board, and the other about 10 feet away from the basket.

Give the students at the board a list of verbs, and give the other group the balls. The second group will try to make as many baskets as possible while the first group conjugates verbs (the time is up when all the verbs are done).

Then, they switch. The team with the most baskets wins.

Materials: Game board, game pieces (to keep track of each player’s position on the game board), dice

Unlike the other games on this list, Fiesta requires a little bit of creative design skills. Why, you ask? Well, the game requires a game board that is similar in style to Candy Land. The purpose of the game is similar to that of Candy Land as well, as each student engages in an epic race to the finish line! must try to be the first one to reach the board’s last square.

Game play is similar to Candy Land, as well. The students take turns rolling the die, and they move their piece according to their roll. On whatever square they land on, there’s a subject and verb combination.

If they get the conjugation right, they stay on that spot. If they get it wrong, however, they move their piece back the same number of spaces as they rolled!

Type: Pairs or groups of 5 or less

In the 2-player version of White Board Racing, each pair should receive a white board. With all white boards distributed, you, the teacher, call out a verb and subject, and then the students have to race to conjugate the verb accordingly.

The first pair that holds up the correct answer gets two points, and the second pair to do so gets one point. The pair with the most points at the end of the game wins.

In the 5-player version, it’s a relay race. You give each group a board and call out the verb. Then, each student writes down the correct conjugation for one of the subjects in the given tense/mood.

After each student writes down a conjugation on the white board, they pass it to the next person in line. The last player to write down a conjugation holds up the board, and the first team to correctly complete the relay gets the point.

If you’re looking to engage your students and increase their retention levels, these games can be a lifesaver. Whether they’re struggling with basic conjugations or something a little more complex, these games are a great way to blend learning verbs with having fun!