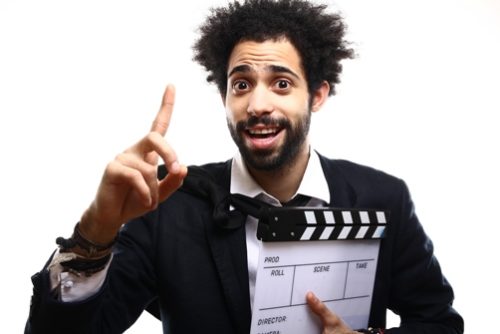 5 ESL Movie Lessons to Do with “The Force Awakens,” “Inside Out” and More

Where do you sit when you go to the movies?

You might be a front row person, so close to the screen and speakers that you can’t help but feel you are part of the world in front of you.

Or you might be a back row person, one who knows there’s no place like home but who still wants to peer into the lives of characters on the big screen.

Sometimes you might just be thankful you got a seat because today’s movie is so hot the tickets sold out before you even arrived at the theater. (Thank goodness for Fandango.)

No matter where you sit when the lights get dim and the credits roll on the screen, if you are a moviegoer at all you know what great entertainment current films can be. But have you taken time to think about what a great medium video is for ESL activities and what great inspiration movies offer your ESL students?

And did you know that some of the most memorable activities you can do in class might be movie- and video-based?

Today, we’re going to look at how you can turn great films into fulfilling assignments, with a focus on writing. Here are some ways to take life from the big screen and give it new energy on the blank page with your ESL students.


5 Creative ESL Lessons to Use with Students’ Favorite Movies

1. Write an interview with a character.

Writing an interview is a simple activity that will work with any movie with interesting characters. Since that’s key to a successful film, choose a movie with characters that you think your students will like based on their personalities. Students will pretend to ask interview questions of a favorite character and write out the response they think that character would give.

One of the most interesting movies I have seen in a while is “Kubo and the Two Strings.” IMDb (International Movie Database) describes the movie like this: “A young boy named Kubo must locate a magical suit of armor worn by his late father in order to defeat a vengeful spirit from the past.” The movie is set in a magical era long gone, based on ancient Japan, and the characters are vivid and interesting and would be great for an interview, my favorites being Kubo, Monkey and Kubo’s grandfather.

After watching the movie but before assigning the writing project, brainstorm a list of questions that might be good for students to use for their written interviews. The best questions are open-ended, that is, they allow for more than yes/no answers: Questions about how the character got to where they are now, questions about why they do what they do, questions about their hopes for the future. Think who, what, where, when, why and how for the best questions.

Have students write their interview as if it were a transcript, in other words, word for word. Then challenge them to write the interview again, this time as a story. As they write, they will need to change the direct speech to reported speech.

2. Predict what comes next.

Mysteries make great films all over the world. There’s nothing that keeps you on the edge of your seat like not knowing what comes next. And that’s why mystery films are great for working on making predictions with ESL students. Since so much of the film focuses on figuring out what comes next, everyone watching will be just as uncertain as the characters in the movie. Let’s look at how to maximize this classic challenge when it comes to writing in the ESL classroom.

One movie that’s good for making predictions is Disney’s hit movie “Finding Dory.” In this sequel to “Finding Nemo,” Dory’s memory begins to come back and she follows the trail of memories back home in hopes of finding her parents.

To make predictions while watching a movie, choose a really intense point and hit pause. Then ask students to think about what might come next in the movie. Have students talk with a partner as each person thinks out their best guess. Partners do not have to agree on what they think is coming up next. Each person should then write a sentence or two about what they think will come next.

Collect everyone’s predictions and note the different predictions your students made. Then play the next scene. For anyone who predicted correctly, award ten points. Then stop the movie again at the next intense point and follow the same procedure for making another prediction. Keep a running score on the board of your room. Stop the film a total of five times or thereabouts and have students make predictions. The person who ends up with the most correct predictions wins the title of chief detective for the day.

For homework, consider assigning students to write a summary of the movie but pretending one of their incorrect predictions really did happen. That might, of course, change the rest of the story too, and that will only make writing the summary more fun.

3. Write a letter from the viewpoint of a character.

For movies where a main character goes on a journey, a fun English activity is to have your students write a letter from the perspective of the main character. Life changes when a person leaves home to pursue a greater destiny (kind of like what your ESL students are doing right now). It’s fun to think about how a character might respond inside to the changes they face outside.

In “The Force Awakens,” Rey experiences the galaxy for the first time after spending her entire life alone on a wasteland. What would she write to a friend back home if she had one? No one can say for sure, but your students will have fun pretending they are Rey and penning a personal letter about how seeing the universe has changed them.

Writing personal letters is a great activity for ESL students. They are informal, enjoyable and serve a purpose. A more modernized version would be to write an email to someone. Whether you have students write a personal letter or an email, take some time after the movie to talk about the conventions that should be followed with either piece of writing.

If you want to extend the activity even further, collect the letters students wrote, shuffle them together and then redistribute them. Then have each person write a reply, in character, of course.

For movies that have a lot of characters, consider using those characters as a starting point for a classification essay. Such an essay takes a large collection of individual items and assigns them classes.

A movie that works great for this kind of assignment is “Inside Out.” In the movie, we see the escapades of Joy, Sadness, Disgust, Fear and Anger, but the filmmakers could have focused on many other emotions. To have your class write a classification essay using this movie, work with your class to brainstorm a list of all the emotions they can think of, whether they appeared in the movie or not.

5. Write a compare and contrast essay.

“Captain America: Civil War” is a great choice for a compare-contrast essay. In it, Ironman and Captain America go toe to toe about whether superheroes should be forced to work for the government for accountability reasons. If you watch this movie with your class, having them compare and contrast Captain America and Ironman as people and for motivation will make a great writing assignment.

When writing a compare-contrast essay, it’s best to limit the points of comparison to two or three, otherwise the essay will be overly lengthy. In general, you will want your students to emphasize comparisons or contrasts, though they may touch on both throughout the essay.

If your students think writing assignments have to be dull, show them they couldn’t be more wrong.

Once the film is off the screen, there’s no better time to put words on the page.

All it takes is a little creativity and some time.