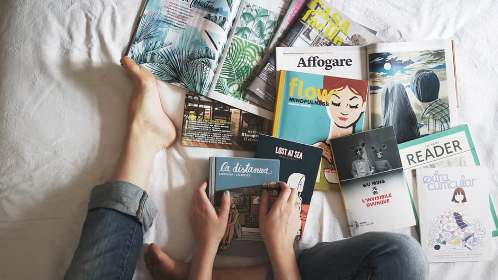 Reading in your target language is one of the most fulfilling things about learning it.

There’s nothing in this world like reading a page of your target language and understanding it.

Not to mention the benefits of carrying around a foreign language book and impressing your friends!

But getting started with native materials can seem like a Herculean task at first. What if you don’t know all the words yet? What if you can’t understand what the writing is trying to convey?

Then there’s the question of what you should read. Novels are so long, and the classics seem way out of reach. Even picture books can be tougher than they seem at first glance.

Don’t let any of this stop you! If you’re a fast-progressing beginner, an average intermediate learner or an advanced learner who’s ready for a reading review, I’m here to help you ease your way into reading native-level material. Tear yourself away from the safe mooring of learners’ materials and textbooks, because we’re about to dive into the deep end of native-level material.

This one’s for the folks out there who haven’t yet laid eyes upon a native-level text. (That said, some readers use non-native learners’ texts—make sure you pick one up that has native material!)

They provide the structure you crave, along with glossaries, vocabulary sections and sometimes even grammar notes. And some readers are graded so that you can really pinpoint where you want to go. Sure, the texts are mostly classics, but all of that support makes them totally accessible.

Simultaneous translations—where one page is in your target language and the opposite page is written in your native language—though, really seal the deal. Simultaneous translations are the literary equivalent of having a friend guide you along. They allow the easiest transition into reading native material. Even the rawest of beginners can match up a sentence from one side of a page to a sentence on the other!

Where to Find Readers?

Never fear—readers for major languages are easily found on the websites of most major booksellers and on Amazon. They’re common learning tools, and you’ll likely be able to choose from many.

Also for Japanese, I’ve personally used “Breaking into Japanese Literature,” which is of excellent quality, and the online store White Rabbit Japan has lots of options for graded readers, bilingual texts and level-specific reading material in general.

There are several e-readers by Routledge and others available on VitalSource for rental (at a cheaper price than what it would normally cost to buy the book), so this is a great option if you’re already using VitalSource for other language learning e-books or if the idea of learning primarily with digital texts sounds appealing. They have readers (and other books) for Greek, Chinese, Hindi, Dutch, Spanish, Italian, German, French, Japanese, Russian and more.

The publisher Dover also has a variety of readers for these languages, so get hunting!

How to Make the Most of Readers

Try to Crack the Code

Take advantage of those simultaneous translations! As stated above, they’re awesome for piecing together a half-learned language. Find a word or phrase that you know and match it up to the translation. Start with short sentences and move on from there. Try to match up the other words with their translations as well as you can, and double-check with the book’s glossary or your dictionary. Think of it like cracking a code!

Add the Language to SRS Flashcards

At the same time, keep in mind that the simultaneous translations are indeed translations, which means that they aren’t perfect glossaries or word-for-word literal translations. So, they’re not the best things to include in your SRS flashcards. Rather, use any vocabulary lists or glossaries included in the reader to SRS all the new words you’re using.

In addition to using readers, you can also take advantage of the selected reading material, SRS and flashcards on the web version of MosaLingua, which is available for Spanish, French, Italian, German and Portuguese. You can read e-books in the MosaLingua library, for example, easily look up words and phrases you don’t understand and then make them into flashcards to review later.

Set a Specific Time to Read Each Day

When you’re first starting to wade into the world of native-level text, exposure is absolutely key. Sure, that block of text is scary at first. That’s absolutely why you need to commit to some reading time in every study sessions—five to ten minutes of looking at native text. Emphasis is on the word looking. You don’t have to understand, you don’t have to look anything up, but make sure you’re taking in some of those words. Make sure you’re getting used to reading in your target language!

And finally, books don’t have to be read in the order in which they’re printed, especially if you’re using them as learning tools. Khatzumoto from All Japanese All The Time spells this out brilliantly in this series of posts—we don’t have to read in order because books serve us, not the other way around.

Skim through the whole tome until you find a sentence you understand!

It’s totally fine, and much better for your studies than you getting bored and frustrated by sticking to a passage that’s too difficult.

If you’re an English speaker (which I’m guessing you are), then congratulations, English books are the most frequently translated in the world. That means, if you have a favorite book in English, chances are you can find it in the language of your choice. These are great for intermediate and upper-intermediate learners, but beginners can totally take a stab at reading them, too!

Context allows you to decode a new language without you having to look up every word in a dictionary—which isn’t all that much fun for anyone. Personally, I love using Harry Potter and Roald Dahl’s children’s books for this. All of these I’ve read about a million times in total, so I know what’s going to happen very intimately. It’s like a simultaneous translation—but in your head!

This allows me to pick up a translated Harry Potter book and dive right into the first chapter—I already know what it’s going to say. I find words I know in the language and I guess at the meaning of the surrounding words.

Guessing? Don’t be so alarmed. It’s not so bad to guess—if you’re wrong, your studies and exposure to native media will correct it. And it keeps you actively reading!

Where to Find Translated Books?

Native-level books can be harder to track down if you don’t live in a country where the target language is spoken, but there’s still hope!

Amazon third-party sellers are great—just search the translated title of the book you’re looking for. Keep an eye out when you’re in used bookstores—I’ve found Japanese and German Harry Potter books in Pittsburgh, Hebrew and Hungarian books in Boston and Korean books in rural Pennsylvania.

You can purchase Kindle/e-book translations on Amazon in languages like Spanish, French and German.

Finally, for languages that have a presence in your country, you might have luck finding books in online stores that sell within your country, like YesAsia for Japanese and Chinese.

How to Make the Most of Translations!

First off, I would recommend using children’s or young adult literature you know well—these work best for beginner and intermediate learners just starting to read native material. These books have easier language and easier content, and that allows you to focus on learning and practicing the language. That being said, always go for what you like. Mainstream fiction novels are often pretty close in reading level to young adult books. And if classics are what you love, go for it!

When you have your book, dive in and start reading. Like with readers, feel free to skip around, skip hard paragraphs, go straight for the dialogue. Find what you recognize and read from there. You could even start with chapter titles or the table of contents! Description tends to have harder vocab, and dialogue tends to have simpler, more colloquial language—keep that in mind while you’re skipping around.

Next up, don’t always use a dictionary. Refrain from trying to look everything up! Relax—you’ll definitely pick things up from context. Kató Lomb, the famous Hungarian polyglot, learned her languages primarily through novels, and she advocated for using dictionaries only sparingly, when absolutely necessary. If you can guess, then guess!

To remember all of this new information, SRS choice sentences when you have time. Don’t make SRS the sole goal of reading—skimming and looking up words should be a separate activity in and of itself. SRS is an active mode of learning that you can fit in when you’re sitting down to study. When you do start with SRS, simply choose sentences where there are one or two words you don’t know. Plug in the L2 sentence on the front of the card, and the definitions of the vocab on the back. And there you go! Easy!

Why Read Comics and Picture Books?

Like with reading translations, the visuals here provide you with context, and that context speeds up learning! If you can’t get a translation of a book you know and love, getting your context through visuals is the next best thing, even if you’re working with a new book that you know nothing about.

It’s best to find either comics or picture books aimed at young readers. Comics will probably be easier to understand, since they’re aimed at younger readers. Picture books can actually be harder. Why? Because they’re often written for parents to read to their kids!

Where to Find Comics and Picture Books?

This will pretty much be the same as for translations. While Amazon is pretty good for Spanish if you’re buying from the US, your best bet is to hunt them down through online stores that sell L2 books in the language you want; here are some examples for French, Spanish, German, Japanese and Chinese.

If you’re just starting out in your target language and feel that you could use more support, Language Lizard, a site that specializes in bilingual children’s products, offers bilingual picture books in over 40 languages. They have all of your major world languages like French, Spanish, Chinese, etc., as well as others you might not expect, like Haitian-Creole and Scottish Gaelic.

How to Make the Most of Comics and Picture Books!

These are especially great for browsing. Embrace your inner child and look at the pictures. Pick out words you know like with anything else you read, and guess at the meanings—but this time, do so by using the pictures. Try to notice repeating words and see if you can associate them with the illustrations. Make it a game and have fun with it!

Again, don’t be glued to your dictionary—especially with comics, the pictures tell half the story. Words you figure out on your own with context will stick with you longer, and that only means more proficiency for you in the long run. Be honest—how often do you remember the scores of words you mechanically look up in dictionaries? Make it memorable by puzzling it out, just like a kid does when they’re learning their first language.

So, you’re all set to develop your own personal, target-language library.

Get out there and hunt down some reading material for your shelves!

Even with native-level materials, there are always ways to ease yourself into reading works by native speakers and for native speakers. This way, you’ll be able to read anything in no time at all!