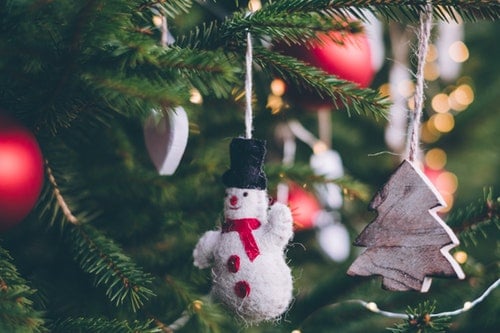 The smell of the holidays is in the air, whether you’re ready for it or not!

People are decorating for Christmas, prepping for cozy parties and preparing gifts for the ones they love.

And not just in the United States or other Western countries.

Believe it or not, Christmas is actually a pretty popular holiday in China.

You’ll see the signs of Christmas fever in larger cities across China and many other East Asian countries.

There are so many great ways to celebrate the holidays wherever you are. And if you’re in China or spending time with Chinese speakers, there are many ways to express Christmas cheer to friends and family in Mandarin and through Chinese gestures.

But why bother getting into all that? Wouldn’t it be easier to just leave it at 圣诞快乐! (shèng dàn kuài lè! — Merry Christmas!) and toss a few gifts around?

Why Should I Learn About Different Types of Chinese Christmas Greetings?

So here are five must-know Chinese ways of offering Christmas greetings, whether through words or gestures.

圣诞快乐 is definitely the go-to phrase to use when greeting someone during the holidays. Quite literally, it means “Christmas happy.” A more extended version of this phrase is 圣诞节快乐 (shèng dàn jié kuài lè), which simply adds 节 (jié — holiday) into the equation. Either greeting is appropriate to say to friends, family and strangers.

You can hear the pronunciation with this video from Learn Chinese with Emma.

You may want to continue practicing this phrase along with other holiday-appropriate vocabulary using videos on FluentU, like How to Say Merry Christmas in Chinese, Common Christmas Conundrums and more.

Even though only around 5% of China’s population identifies as Christian, it should still be appropriate to say “圣诞快乐” around the holidays, especially if you’re in a large Chinese city. Christmas is seen as more of a fun, commercial, non-national holiday to non-Christian Chinese people. In big cities, you’ll likely see stores pumping out holiday tunes, the streets lit up with Christmas lights, extravagant, massive Christmas trees and performers dressed as 圣诞老人 (shèng dàn lǎo rén — Santa Claus). (Quite literally, “Old Christmas Guy.”)

Even though only 5% of China is composed of active Christians, those numbers are growing. Unfortunately, according to the BBC, many Christian Chinese people turn to underground churches due to religious persecution from the Chinese Communist Party. That being said, if you have a Chinese friend who’s Christian, you may not even know it.

In the event that you’re traveling to China for missionary work with openly Christian Chinese people or you have a Mandarin-speaking friend who’s openly Christian, you can give them a very special, more religious Christmas greeting.

“耶诞快乐!” is a great religious greeting to say to Christians around Christmastime. 耶 (yē) is short for 耶稣 (yē sū — Jesus). These characters individually don’t actually have any meaning in Chinese, but serve as a transliterated way to pronounce “Jesus” and other foreign names. Literally, 耶诞快乐 translates to “Merry Jesus’ birthday.”

You can hear the pronunciation in this YouTube video. Due to cultural sensitivities, it may be wise to only say this phrase to Christian Chinese people.

Christmas is just one of the many holidays that take place in China during the month of December. In fact, there are many holidays during this time that are more widely celebrated by Chinese people than Christmas.

冬至 (dōng zhì — The Winter Solstice) occurs around December 22nd and often involves ancestor veneration, big feast days, getting together with family and celebrating what some consider the Chinese Thanksgiving. Another holiday is the 腊八节 (là bā jié — Laba Festival), which occurs on the eighth day of December. This holiday is the day that the Buddha attained enlightenment, and Chinese people (especially Buddhists) will celebrate by eating Laba congee (or rice porridge), preparing garlic vinegar and participating in farming festivals.

If you want a more inclusive phrase to use during the winter months that doesn’t involve saying “Merry Christmas,” a good alternative would be “佳节快乐!” This phrase literally translates as “Merry Festivities,” and you can practice saying it with this video from Lauren Liu.

4. Offer and receive gifts with both hands (and bring apples!).

Whether it’s for Christmas, someone’s birthday or a polite expression to a boss or coworker, you should always present gifts with both hands. Why? Well, it’s considered very polite.

Just tossing a gift at someone or using one hand to receive a gift looks a bit rude, as if you don’t really care about the gift at all. When you use two hands to take or present a gift, no matter how small, you’re putting more of your body into the presentation. In China, this is considered an aspect of 面子 (miàn zi — saving face). And if you’ve been studying modern Chinese culture for more than five minutes, you definitely know the importance of saving and giving face. So give Christmas gifts with both hands, and if someone gives you a gift, thank the giver profusely.

When it comes to giving an appropriate Christmas gift, don’t expect to be given a wishlist. Apples are a recent trend for Christmas gifts, as well as covering a dinner out or a round of drinks during karaoke. Since Christmas isn’t such a strong cultural holiday, you can easily spread Christmas cheer by taking some friends out for a fun Christmas Eve. See this video for some further insight into shopping for Christmas gifts in China.

5. Greet others by singing some carols in Mandarin.

If you’re easily annoyed by the constant barrage of Christmas songs on the radio, in stores and just about everywhere else during December, this way of saying “Merry Christmas” may not be for you.

But if you’re an extrovert who loves to sing and happens to be in a major Chinese city, you could easily take part in the culture of carol singing around Christmas. The Western tradition of singing carols door-to-door is definitely dwindling, but not in China!

You could even stick to the karaoke lounge with your Chinese friends instead of going around your neighborhood. “叮叮噹” (dīng dīng dāng — “Jingle Bells”) is a pretty well-known carol in China. Other carols may not be as familiar to Chinese listeners, but it couldn’t hurt to learn as many as you can: Here’s a Chinese version of “We Wish You a Merry Christmas.”

There are so many cool ways to celebrate the holidays in China. From hosting parties to singing carols to decorating, you’re sure to have a great time during this time of year if you happen to be in a large Chinese city.

Now get out there and impress your Chinese friends with your knowledge of Chinese Christmas greetings, and don’t forget the apples!

Learn Mandarin Chinese Step by Step: The Newbie’s Road Map
How to Remember Chinese Tones and Sound Like a Native