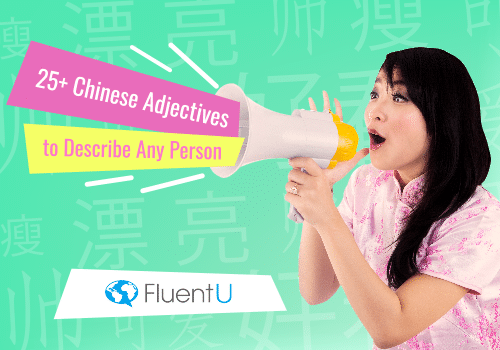 Give Compliments or Dish Dirt: 25+ Adjectives to Describe a Person in Chinese

Every language has its own extensive list of vocabulary for describing someone, both in terms of personality and appearance.

Learn some of these key terms, and you can greet your Chinese host family with a compliment or flatter a hotel hostess by saying how beautiful she looks today.

We’ll show you some common terms you can use to speak positively about others—it’ll certainly earn you some brownie points among the locals.

Of course, we’ll also touch on some not-so-positive adjectives you can use when you need to complain about your annoying coworker or convince your friend to dump a bad date.

Before we dive in, let’s take a look at some grammar and etiquette for describing people in Chinese. Note that this post uses traditional Chinese characters.

Use 很 When Describing a Person

In English, describing a person is pretty simple. You use the verb “to be” followed by the adjective (e.g. he is young; you are hard-working).

In Mandarin, the closest equivalent of “to be” is 是 (shì). A simple example would be 我是你的朋友 (wǒ shì nǐ de péng yǒu — I am your friend).

But when you’re describing other people, watch out! Beginners may think that a sentence like “he is tall” would translate in Mandarin as 他是高 (tā shì gāo). This is incorrect, or as you would say in Mandarin, 不對 (bù duì). The correct way is to use 很 (hěn).

However, 很 is also used in place of 是 when describing a person. So you would use 他很高 (tā hěn gāo) to say, “he is tall.”

If you insist on using 是, you can do so by adding 一個 (yī gè) and 的人 (de rén) between the verb. So you would be able to say 他是一個高的人 (tā shì yī gè gāo de rén — He is a tall person). This is wordier, and in spoken conversation people often just use 他很高 (tā hěn gāo).

In Western culture, would you say to someone’s face that he or she is fat? I suppose you would if you’re deliberately trying to insult or show some tough love. In normal conversation, though, you would use more politically correct terms to avoid offending that person. This may include terms like “curvy” or “full-figured.”

It’s the same in Chinese culture. Certain terms are used to describe a person in a more gentle manner.

For example, instead of bluntly and insensitively saying “she is fat,” or 她很胖 (tā hěn pàng), a more appropriate wording would be 她很丰满 (tā hěn fēng mǎn). 丰满 means “plump.” Another suitable word would be 圆润 (yuán rèn — round).

It’s also considered generally insulting to call someone short. Much like in Western culture, people don’t like being told that they’re vertically challenged. You wouldn’t then want to say 她很矮 (tā hěn ǎi — she is short). A more polite term would be 娇小 (jiāo xiǎo), which best translates as “petite.”

With this etiquette in mind, be aware of the impact negative adjectives can have before you use any of the ones listed below!

25+ Chinese Adjectives to Describe a Person’s Personality and Appearance

In civil society, making complimentary comments is the polite way to go. Here are a few positive terms for describing personalities.

You can hear many of the adjectives above and throughout this post in FluentU’s authentic videos.

With the positive comes the negative. We all have attributes that we know could use some improvement. Perhaps you notice these less-than-desirable traits in other people. You can use negative terms to describe people you’re not exactly fond of.

Keep in mind that you can also describe someone negatively by simply placing 不 (bù) before any of the positive terms listed above. You can say 他不聰明 (tā bù cōng míng) to say “he is not smart,” which is essentially the same as 他很笨 (tā hěn bèn — he is stupid) or “he is dimwitted.”

What about describing someone’s physical attributes? Like personalities, we’ll list some positive traits followed by some perceived negative ones.

If you want to compliment someone’s appearance without pointing anything out in particular, you can just say 身材好 (shēn cái hǎo), which literally means “good body” or “good figure.”

What about 瘦? As with Western culture, the word “skinny” can be a positive or a negative, though it’s usually the former since being thin is considered a desired trait, especially for women. In Chinese culture, the term is generally positive by default. In fact, you can make a woman happy by telling her 你很瘦 (nǐ hěn shòu — You are thin/slender).

The term, however, may also be negative. If someone were to say 你太瘦了 (nǐ tài shòu le — You are too skinny), they’d be implying that you should probably eat a bit more. More women in China are actually beginning to eat less as they strive for that super-model-thin image, but that’s a whole other topic.

As mentioned earlier, there are more politically correct terms for “fat” and “short.” As for 难看, yeah, I don’t think there’s a nicer word for that. Strangely, the term is used quite often when describing babies. Parents won’t hesitate to use that term when describing how their children looked as infants.

Adjectives with Different Meanings in Western and Chinese Culture

Adjectives may differ in meaning across Western and Chinese culture. What’s considered a positive attribute in one society may not be considered as such in another.

Take the word “gullible,” for example.

In English, the term has a negative connotation as it describes someone who’s easy to trick or deceive. In Mandarin, an equivalent word is 老实 (lǎo shí). This term, though, isn’t exactly negative. It describes someone who—while maybe slightly on the naive end—sees the good in other people and is quick to trust someone. Chinese locals generally don’t use the term as a negative.

Another word is 內向 (nèi xiàng — introvert). In Chinese culture, this is a fairly neutral term that just refers to someone who’s shy and reserved. In English, “introvert” may more or less mean the same thing. However, some also use the term to describe someone who’s anti-social or lacks self-confidence in front of other people. 內向 doesn’t quite have that context.

In any case, the terms aren’t necessarily black and white in either English or Mandarin. Watch this video and skip to the 11-minute mark where the instructors discuss several culturally ambiguous personality traits.

With these new vocabulary words for describing people, you can make compliments or even partake in local gossip. You can now assign attributes to family, friends or your favorite celebrity. For example, I can say this regarding my favorite Mandopop idol Jolin Tsai: 蔡依林很性感 (cài yī lín hěn xìng gǎn — Joline Tsai is sexy!).