What Is Occitan? How a Formerly Banned Language Influenced Modern French

Did you know there’s a whole side of French you may have never known existed?

In fact, knowing origins of words can be a very memorable way to learn, and there are more to some French words than meets the eye.

Enter Occitan, a language of Southern France whose influence pops up all over standard French.

But what is Occitan, who speaks it and how exactly has it impacted the French language?

Occitan is a Romance language that hails mainly from Southern France, with some small outposts in what’s now Italy and Spain. It’s sometimes referred to in French as langue d’oc, and you could think of it as a “family” of dialects including Provençal, Languedocien, Gascon, Auvergnat, Limousin and Vivaro-Alpin.

Although it was the main literary language in France back in the Middle Ages, UNESCO now considers all of Occitan’s major dialects as endangered.

If you want a chance to speak Occitan, you have to really go looking for it. Most people in Occitania (that is, the Occitan lands) don’t speak it anymore. Today, Occitan is mostly spoken at home or casually, and those who do tend to be very old or young activists hoping to save the language as it makes its last gasps.

Currently, there’s an attempt being made at a revival, with festivals, singing clubs and classes available at some universities.

What Languages Are Similar to Occitan?

Occitan has similarities with other Romance languages like French, Spanish and Italian. Here’s what one dialect of it (Aranese) sounds like:

The language that’s the closest to Occitan would be Catalan. Some linguists even debate that Catalan and Occitan are actually the same language.

As a Catalan speaker, I’ve been able to hold conversations with Occitan speakers without any problems. If you know Catalan, it’s also possible to watch the news in Occitan and understand most of what’s being said.

How Is Occitan Related to French?

Occitan was the main language in Southern France many centuries back, during the time of the troubadours. Eventually, French was declared the official language of France, and speaking other languages was heavily discouraged or even forbidden. For example, at some point, people weren’t allowed to speak Occitan at school, and they couldn’t even use it for official documents.

But even if Occitan does die out, the language will at least be remembered through its influence on French. Since French and Occitan were neighbors for centuries, there were lots of opportunities for this crossover to take place.

As with America’s Spanglish, there’s now a crossbreed of the two that’s called Francitan. And as I’ve previously documented for this blog, there’s a lot of regional slang in Toulouse that’s taken from Occitan. You’ll soon start to see all the various areas of overlap and origin here.

However, keep in mind that some etymologies are still being debated among linguists. There are plenty of discussions to be had on this fascinating topic, but there’s no doubt of its linguistic importance!

The following are all important parts of modern standard French. The origins may be region-specific, but you can use the vocabulary that you’ll learn in this post anywhere in the French-speaking world:

1. Amour and other -our and -eur words

The word amour (love) seems so quintessentially French, doesn’t it?

From the perspective of Anglophones struggling to learn French in France, that second vowel is fiendishly tricky to achieve, as is the emotion itself. But amour is an Occitan import.

Occitan troubadours once traveled through France singing about amor.

But the Latin students out there might be saying, “how do we know that amour was borrowed from Occitan, and not taken from directly from the Latin amore?”

The answer is that French (in its Picardy dialect) already did have its version of the Latin word, ameur. The fact that modern French uses amour instead of ameur shows that the Occitan version of the word won out.

We thus know that the words fleur (flower), douleur (pain) and chaleur (heat) followed a similar path through Occitan before being borrowed by French, also due to their vowel sounds. The original Occitan words were flor, dolor and calor.

For those who study other romance languages, you’ll notice regular, easy variations from Italian, Spanish, Catalan or Portuguese with these French words.

2. The obsession with good eating

Southern France is famous for its gourmandise (love of good food, gluttony), so it makes sense that some of its food vocabulary would make its way from Occitan into standard French.

The following animals were originally Occitan, and French took on versions of the Occitan names.

I’ll give an Occitan word first, followed by its French translation and then English. You’ll see a certain obvious pattern in how these words became Frenchified:

Resources for Learning About Occitan and French

For further adventures into better understanding French—and, of course, improving your vocabulary and retention of it—here’s a useful Occitan-French dictionary.

And, if you found this exercise useful for memorizing new vocabulary, or if you’re a word nerd planning a wild Saturday night, you can head to this French etymological dictionary.

To see these words in action, you can always listen to native speakers using them in interviews, vlogs and more on YouTube. There’s also FluentU, a language learning program that uses video and audio clips to teach French in context.

With FluentU, you can gain exposure to many nuances of French, such as regional accents and dialects. You can also use the built-in, interactive subtitles to learn what these words mean, then practice them with multimedia flashcards and personalized quizzes: 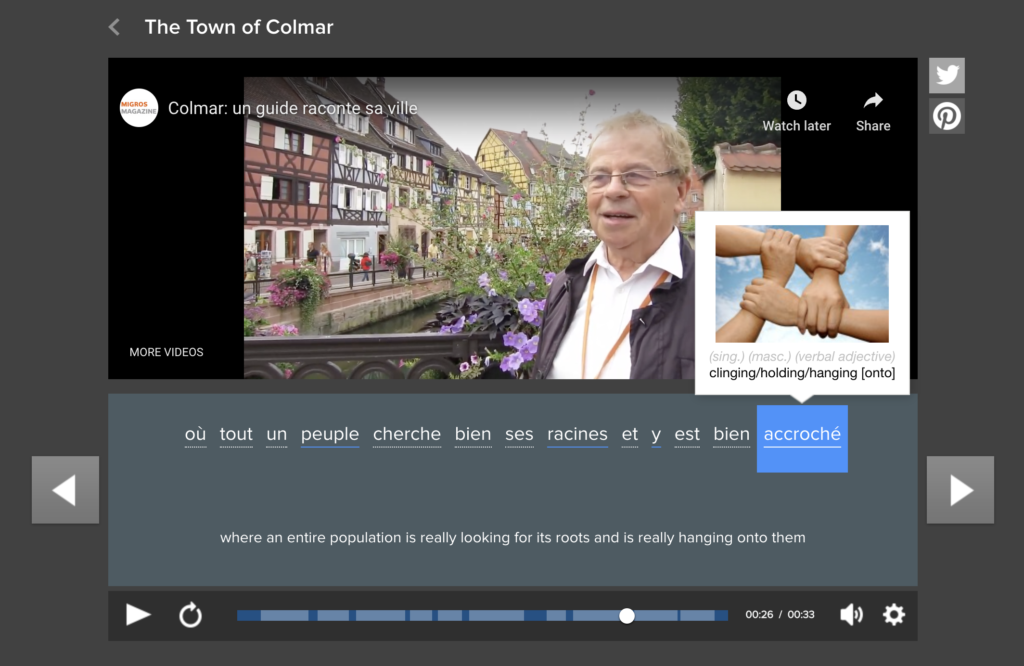 As a French learner, you might enjoy getting to know Occitan since it’ll expose you to a different aspect of French culture and history.

So have fun trying out some Occitan vocabulary and exploring the resources above!