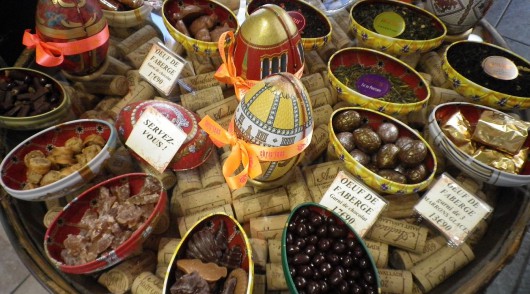 Looking forward to the Easter holidays?

Are you also learning French?

Or maybe you are just wondering how the traditional celebrations are different in France to other countries?

Then with this list of phrases and the accompanying explanations you’ll be able to add a little French flair to your spring festivities.

Pâques is a day that falls on different dates each year, but always in spring, on a Sunday. In Anglophone countries it is known as Easter. It predominantly derives from the Christian faith, but many of its traditions are a mixture of the rituals of many religions, old and new. The commercialization of Pâques has made it that these days it is perhaps best known for one thing: chocolate! We will get onto that later but for a start, on the day, it is natural to say to friends and family “Joyeuses Pâques” (Happy Easter). It is a popular holiday in France where schools and universities give their students two weeks of vacation! These are called vacances de Pâques. Easter Monday is a National Holiday, meaning employees of most companies get the day off.

Attendez que les cloches sonnent literally means wait for the bells to sound, it is something that is likely to be said to impatient children. Here’s why: unlike in other countries including Germany, the UK and America where the Easter Bunny brings the eggs, throughout most of France* it is the ringing of the church bells that deposit the eggs into the gardens from the sky. But only if the children have behaved themselves throughout the year!

*However, depending the place and the people it may also be a rabbit or a chicken that delivers the eggs.

Once the eggs fall from the sky they become scattered and hidden in everybody’s backyards—and so the hunt begins. Partir à la chasse aux œufs means to go on an egg hunt. Normally it is the adults that hide the eggs for the children to find, but it is not uncommon for French children (once they have realized the eggs don’t actually fall from the sky) to take more pleasure out of hiding the eggs from the adults.

That’s right! Tout le monde mange les œufs en chocolat translates as: everyone eats chocolate eggs. The French are known for their sweet tooth and their Francophone neighbors the Belgians are renowned for making the world’s best chocolate, so, during Pâques it would be difficult to find anybody in this part of the world who hadn’t eaten at least one little Easter Egg.

Because of the renowned sweet tooth, a phrase like this is often used as a humorous but justified reply to somebody wishing you a Happy Easter. Attention à l’indigestion! would then be a subtle way of saying don’t eat too much chocolate, literally: “Beware of indigestion!”

Don’t worry too much about a health scare, though. It isn’t just chocolate that is eaten on Pâques. For those in need of a good square meal, why not eat gigot d’agneau (a French dish that is traditionally eaten on this day). Gigot d’agneau is a leg of lamb and will often be served with potatoes and other seasonal vegetables.

There are a few idiomatic expressions that can be used all year round that refer to Pâques. Se faire poissonnier la veille de Pâques is a way of saying: to pick the worst time possible to do something. Literally: “to become a fish seller the day before Easter.” The idea being that since many Christians abstain from meat during Lent and eat fish instead, that the best time of year for fish sellers is during Lent. The day that Lent ends would be the worst possible time to open up a fish shop since by that time, everybody’s more than ready to go back to eating meat.

À Pâques ou à la Trinité is a way of saying that something is never going to happen. The idea being that the second coming of Christ will probably happen before the event being referred to happens.

If you’d like to move beyond Easter terms and learn French with fun, addicting and authentic material all year round, then you’ve got to try FluentU.

As you continue advancing in your French studies, FluentU keeps track of all the grammar and vocabulary that you’ve been learning. It uses your viewed videos and mastered language lessons to recommend more useful videos and give you a 100% personalized experience. Start using FluentU on the website with your computer or tablet or, better yet, download the FluentU app from the iTunes or Google Play stores.

Christopher GJ Cooley is an expat resident of Bordeaux who blogs about wine and language learning (amongst other things) at drinkingitallin.com.