The top of a ferris wheel can seem so high up from the ground.

But when you’re on the slow, gentle ride, you know you’ll eventually reach the top.

Speaking French without a foreign accent can also seem a long ways away.

But with a strategic approach that gradually gets you closer and closer, you will get there.

And do you know what will turn the wheel to keep you progressing on this pronunciation promenade?

When you begin to speak French, it’s incredibly worthwhile to get used to the common sounds of the language, and the best way to do this is to take a look at phonetics.

By breaking words down into individual sounds, phonetics can make French much more manageable and soon, speaking French will become second nature. To help you steadily make your way to the top, we’ve put together six foolproof steps for mastering French phonetics.

Why Do Phonetics Matter for French Learners?

Breaking words down into bite-sized chunks will help you hugely down the line. By taking your time to learn these basics in the beginning, you will later improve at a much more rapid pace.

1. Practice daily with a phonetic alphabet

Of course, the best way to really master French phonetics is with the use of a really great French phonetic dictionary. Word Reference’s online phonetic dictionary is a great tool to use if you’re struggling with new words, and will act as a nice reminder of how individual letters function within words. You have access to both written and recorded versions of the words, including phonetic spellings.

Note that the International Phonetic Alphabet is something you will see used on most learner websites. Presenting letters between backslash markings ( / / ), this phonetic alphabet shows how to pronounce words.

I do recommend taking the time to learn the phonetic alphabet. French phonetic dictionaries focus on specific vowel and consonant sounds which pop up frequently in the French language, so once you’ve committed their IPA symbols to memory, you will have no trouble blind-reading new words written in IPA.

Choose one IPA letter at a time to make your task a lot more manageable. You could learn one sound a day, or even spend a full week on a single vowel sound, for example. That week you would learn words which use that particular sound—which will not only help you to remember the pronunciation, but it will also improve your vocabulary.

In addition, regular phonetic exercises will really keep you on track. The website Phonetique is packed full of interactive learning activities that will put your phonetic comprehension to the test. You can choose the type of letter pairing which you want to be tested on, and listen to a number of different pronunciation pairings. It’s normal to struggle at first, but with time and continual exposure, you will be able to mark the difference between a French /u/ and /y/!

As with all learning exercises, it pays to take your time with French vowels, focusing on one type at a time. The pure vowel sounds are a good place to start, as they appear in many common French words. Use the IE Language page above to begin getting familiar with these sounds. Listen to the recorded pronunciations and try repeating afterwards.

After learning the sounds themselves, practice saying words in which the specific sounds appear. You can use the site’s sample words for this. Start with one vowel sound and repeat it several times, and then say the words. Try adding a new word and/or sound into your learning routine each day to gradually learn the vowel sounds.

But don’t just listen to these vowel sounds and words in isolation. Later on, you can move on to FluentU to listen to French vowels in context.

3. Source out the silent letters

French does have some silent letters, so once you’re feeling good about your vowels, continue on to these quiet critters. While “h” is probably the most popular of the silent letters, there are others that pop up from time to time.

Using petit (small) in its masculine form, for example, you would not pronounce the final “t,” which leaves the word ending in a vowel sound. If you were describing a feminine object as being petite (small), however, you would complete the word with a /t/ sound.

Using a gender guide in French can help you to focus on the differences in pronunciation and on hard and soft endings. While the website Grammarist can help you to recognize when a noun is masculine or feminine, Audio French.com gives you direct access to a word’s pronunciation, so that you can hear it before you speak it. Setting yourself a list of 10-15 new words each week to learn to pronounce will help you to make steady progress.

And if you’re ever in doubt of how to pronounce a word, the French audio dictionary on About.com or Forvo will have you covered.

4. Note the differences in French consonants

While many consonants in the French language have consistent sounds, there are some which function differently than what you might be used to in English.

The French “r” probably gets the most attention as a difficult letter for English speakers to pronounce. Spoken at the back of the throat, it has a much more guttural sound than in English, and is always pronounced as a strong sound. Merci (thank you), for example, has the “r” spoken at the back of the throat. The vowel sound in the middle of the word is spoken in a similar way to the word “air” in English, so make sure to take even the simplest words one at a time. 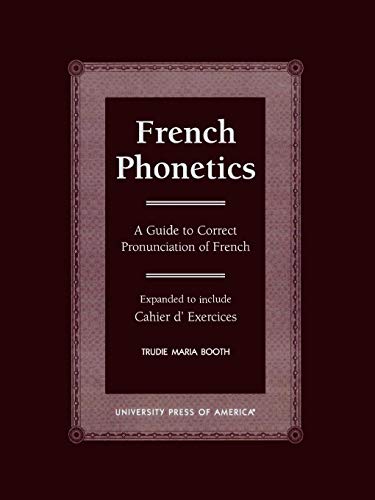 As with many rules, there are exceptions that can be picked up with practice, so a great pronunciation guide will really serve you well. The book “French Phonetics” is one such guide, which draws attention to the important differences between individual words. As in the other steps, choose a new type of consonant every few weeks and focus on its different possible pronunciations. How a letter is pronounced when it falls at the start, middle or end of a word can differ massively, so pay attention to location.

Beginning your study session by reading, pronouncing and repeating a group of 10 words which all feature the same consonant sound can be a great little warm-up.

5. Focus on the boundaries between spoken words

Many French words are often purposefully run together, pronounced as a continuous phrase depending on how they are spelled. For the most part, words which end in a consonant and are followed by a word that start with a vowel are run together; the final consonant of the first word is sounded at the start of the second word.

Mon amour (my love), for example, would be pronounced something like mo n’amour. In French, final consonants are not pronounced unless there is a vowel directly after it. In cases like this, the vowel of the following word triggers the pronunciation of the final consonant, making it sound like the two words are being run together.

French liaisons might seem a little confusing but, as with any part of the French language, they simply take a little practice. This clear intro to liaisons on the site Spell and [S]ound is a good place to start. About.com’s French Language section also has a nice lesson on liaisons. Begin with the required liaisons and then learn the forbidden liaisons, which will tell you when you should and shouldn’t run your words together.

6. Learn how to stress your words correctly

Like every foreign language, French has a very specific way of stressing words, which must be learned if you want to hold a decent conversation. Whereas English gives emphasis only to the stressed syllable in a word, French stresses the final syllable in a word, making pronunciation much different between the two languages.

Luckily, there are many places where you can get your hands on pronunciation information, especially if you’re struggling with new words. Again, WordReference.com can be a particularly useful site for this. Once you’ve heard how a few French words are stressed, you will realize that the difference is not too hard to understand. Simply speaking through the words slowly will make pronunciation easier; after that, you can increase your speed as you wish.

Setting yourself a new vocabulary list at the start of each week can be a great way to get used to stresses in the French language. The University of Texas’s Department of French and Italian has an awesome site with everything you could need to know about stresses in French words. It also provides some solid learning exercises to practice. Listen to the difference between English and French stresses, and then try it for yourself. Repeat the French, focusing on your stress, to ensure you have really understood.

French phonetics create the momentum that will steadily propel you towards fluency. Slowly approach each sound one at a time to really sink into the French language. Before you know it, you’ll be up at the top of that ferris wheel, and speaking like a native will have become second nature!