Imagine strolling down a street in Paris or on an avenue alongside the French Riviera.

The sun is shining and you’re surrounded by hundreds if not thousands of smiling faces. Excitement pulses through the air. You hear laughter and happy French voices.

While any day that you get to spend in France is surely lovely, this one is special because today there’s a festival. And that means some amazing possibilities for you as a French learner!

There are some French lessons that simply can’t be learned from a textbook, a great new app or even the most educational website.

A truly extraordinary way to immerse yourself in the French language and culture is by joining in on some of their celebrations and traditions.

There are French festivals throughout the year and every year, so regardless of when you find yourself in France, there’ll likely be one taking place somewhere.

Here are some of our favorite French festivals, and some relevant vocabulary words too!

What You Can Gain from Attending a French Festival?

Most festival attendees are in joyous moods and high spirits. Particular types of festivals also tend to attract a lot of like-minded individuals.

Unlike trying to strike up a conversation with a complete stranger on the street, doing so at a festival is often more welcomed and well-received.

Plus, you’ll automatically have at least one thing in common with most people at the festival you decided to attend, which makes starting a conversation even easier.

A festival is the perfect place to let your guard down, have fun and make some new French-speaking friends.

In line with making new friends, attending a French festival is an excellent way to gain some authentic French language practice.

Whether you decide to partake in small talk, order food and drinks, purchase souvenirs or participate in an special festival activity, there are endless opportunities to use your French at a French festival.

You’ll also be exposed to all sorts of slang and regional vocabulary, which is invaluable as a French learner.

A taste of French food

What’s the one thing all festivals have in common?

And not just ordinary food!

Festivals are famous for serving regional dishes and food that’s unique to specific types of celebrations and traditions.

Sampling all the different foods offered a French festival is a delicious way to get a taste of some French cuisine that you probably didn’t even realize existed!

The decision to attend a French festival might take you to a part of France that you never even dreamed of!

How to Get the Most Out of a French Festival

Brush up on your French

To help you prepare for your trip to France, and especially your French festival experience, brushing up on your listening comprehension skills is very useful.

You can start by listening to French podcasts, watching videos in French on YouTube or watching French language Netflix films. If you’re watching videos, subtitles (in French) will help increase your comprehension.

While some festivals are free and are held in open public spaces, some require you to purchase tickets ahead of time.

You’ll also want to know what time festival events take place and what not to miss, such as special performances or parades.

While it’s totally possible that you could just end up in the right place at the right time, most of the time, a little planning and research needs to go into attending a festival.

Most information that you’d want to know before attending a French festival can easily be found online.

Use your French whenever possible

Attending a French festival is your chance to test out all the French you’ve been studying at home!

Don’t fret if it’s not perfect.

Most French people will appreciate that you’re trying your best to speak their language.

One of the best ways to practice and improve your French is to actually use it in real-life settings, and what better place than a festive French festival? 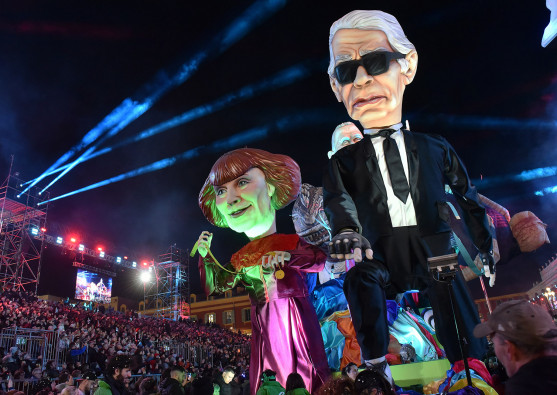 The night before Lent begins is a popular time for Carnival celebrations all over the world.

But the picturesque and romantic city of Nice along the French Riviera really stands out as an exceptional place to experience this holiday!

Carnival is celebrated every year in late February or early March.

During this time of the year, much of Europe is still shrouded in winter rains and gray skies. This is not the case in Nice, though! The climate here is usually nice and warm!

Nice puts on not just one, but three parades during Carnival: a Day Parade, a Night Parade and a Flower Parade.

These parades include an average of 17 floats, and some of them are 17 meters tall!

Carnival in Nice has been celebrated since the Middle Ages, and today attracts over 204,000 spectators. 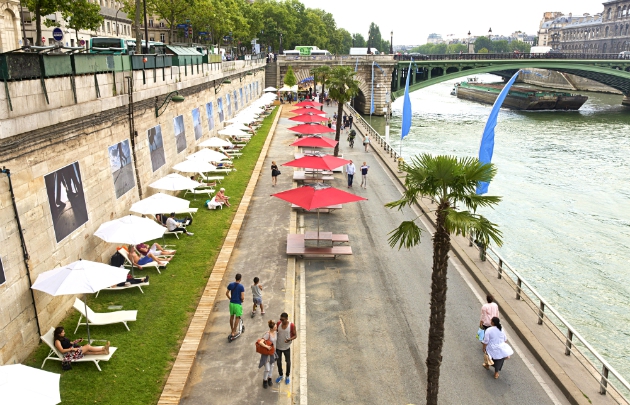 Could you imagine if Paris was by the beach?

With this unusual festival, it is!

From July 6 to September 1, be on the look-out for random pop-up beaches along the streets of Paris! These pop-up beaches are complete with deck chairs, palm trees and free concerts.

Every year, three locations in the Paris area are also designated as temporary beaches along the banks of the Seine River.

You can enjoy a variety of activities like boating, sunbathing, various water sports, dance lessons and of course, classic beach food and drinks.

Plagiste — A person who goes to the beach

Le Louvre à la plage — The Louvre at the beach (The Louvre, and many other museums offer outdoor programs during this summer-long beach party.) 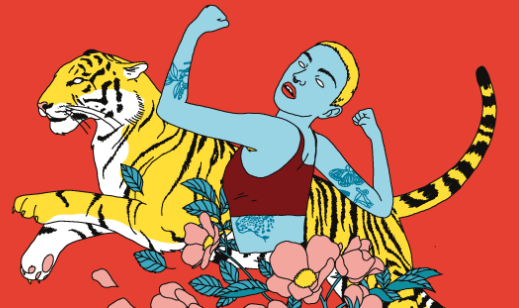 This huge multi-national concert takes place in Paris during the last weekend of August every year.

Despite its name, this festival actually hosts all kinds of music genres including rock, alternative, indie, hip-hop and pop.

You can purchase either a three-day pass or a one-day ticket to this event.

It’s the perfect opportunity to catch all the biggest international musicians all in one place! 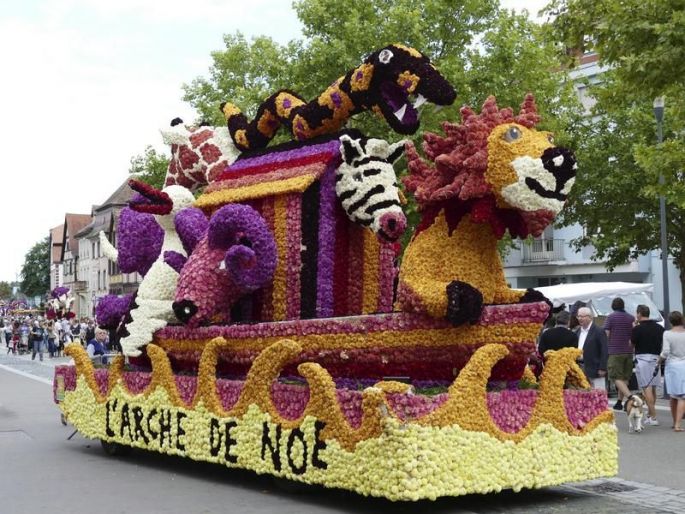 On a Saturday in mid-August, the little city of Selestat in the northwestern region of Alsace hosts its famous festival of dahlias, a colorful flower in the sunflower family.

This beautiful festival includes a parade in which floats are decorated with more than 400,000 dahlias. The floral celebration is topped off with a spectacular fireworks display.

If you can’t make it to Selestat in mid-August, all is not lost, though!

Several other towns in France have their own version of the Corso Fleuri. These include Bormes-les-Mimosas (in mid-February), Neuchâtel (on the last weekend in September) and Lavandou (in March).

Les animations — Animations (This word is used to describe the fireworks, which are “animations” of the flowers.) 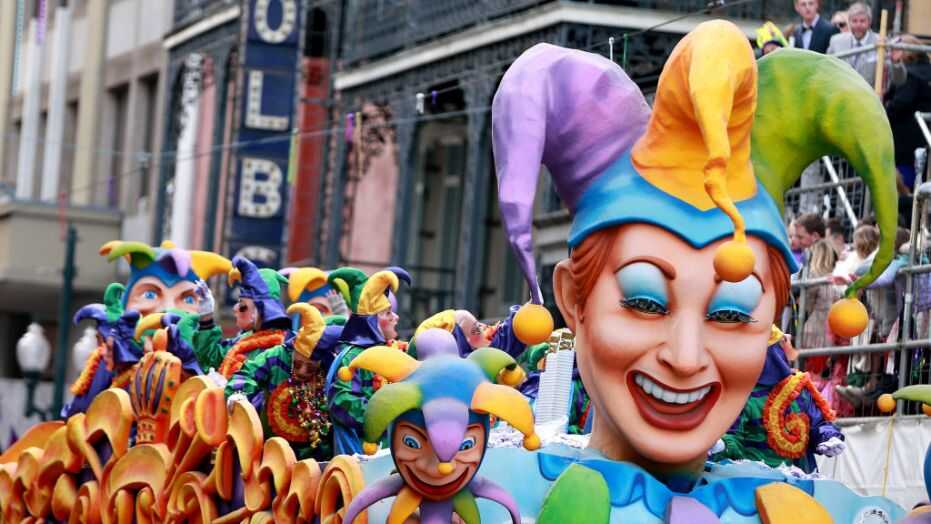 Most of us associate Mardi Gras with New Orleans, but France also hosts a wonderful celebration on Fat Tuesday before Lent begins.

Traditionally, this is the last night of partying and fun before devout Catholics give up over-indulging in food and drink for the 40 days leading up to Easter.

Similar to New Orleans, this is a free-for-all of feasts, pageantry, masked balls and parades.

Jugglers and stilt-walkers can be seen strolling casually along the streets of almost any French city or town.

You’ll also see a lot of children in costumes.

But the best part of Mardi Gras might be the food! 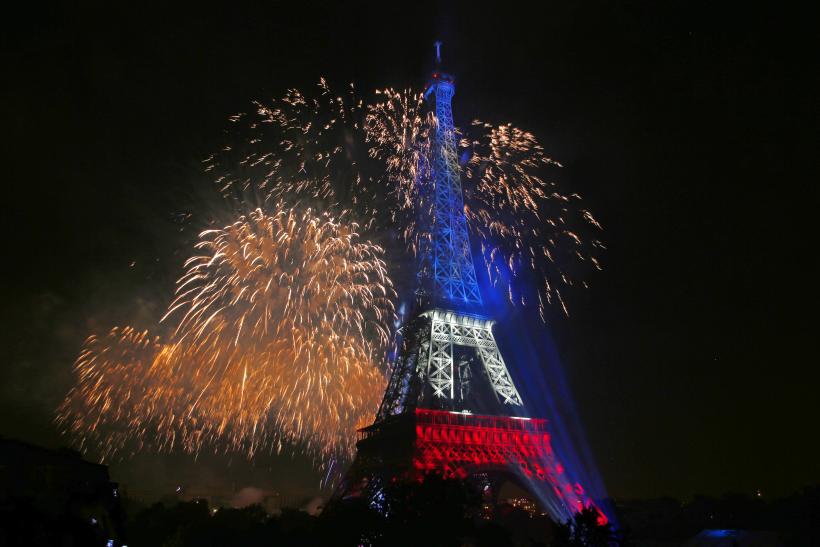 France’s national holiday is on July 14. This is a historic event that you’ll never forget, if you get the chance to experience it in Paris.

A really unique part of Bastille Day includes the Fireman’s Ball. This tradition dates back to 1937 and involves fire stations opening their doors to the public and putting on gymnastic performances and small firework shows.

Bastille Day also includes the largest military parade in the world on Paris’ Champs-Élysées and countrywide fireworks displays. This festive celebration is a chance to party it up with the French!

La fête nationale — The official title of this day in France

Le quatorze juillet — The unofficial name for this holiday 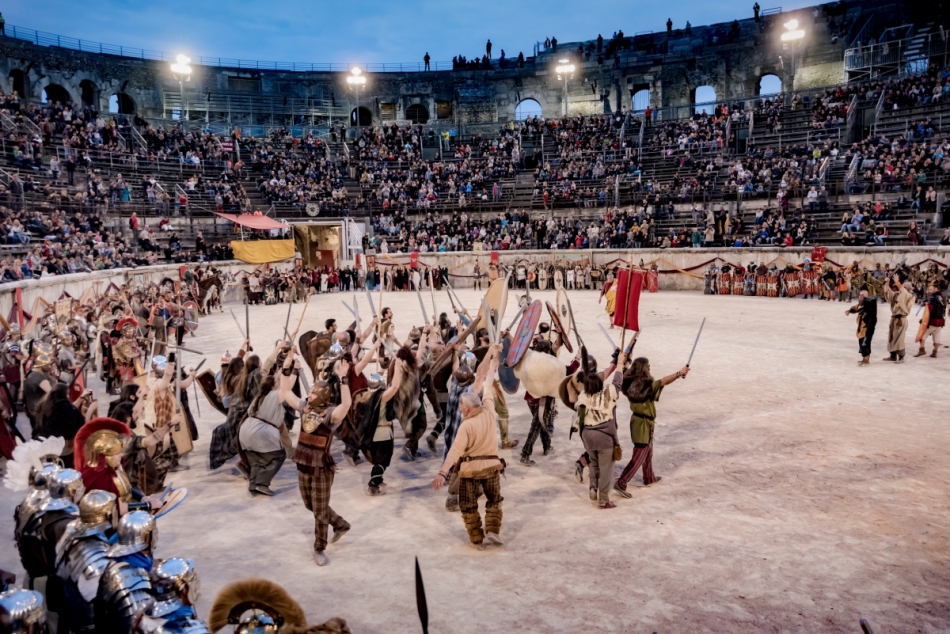 If you love history, this is the festival for you!

The ancient Roman amphitheater in the town of Nîmes is over 2,000 years old and still remains impressively intact.

Every year in early May, this is the scene of a historical reenactment of epic proportions.

Gladiator contests, chariot racing and equestrian vaulting are just a few of the spectacles that take place here.

Every detail is the result of careful historical research and accuracy. You’ll certainly feel like you’ve traveled back in time! 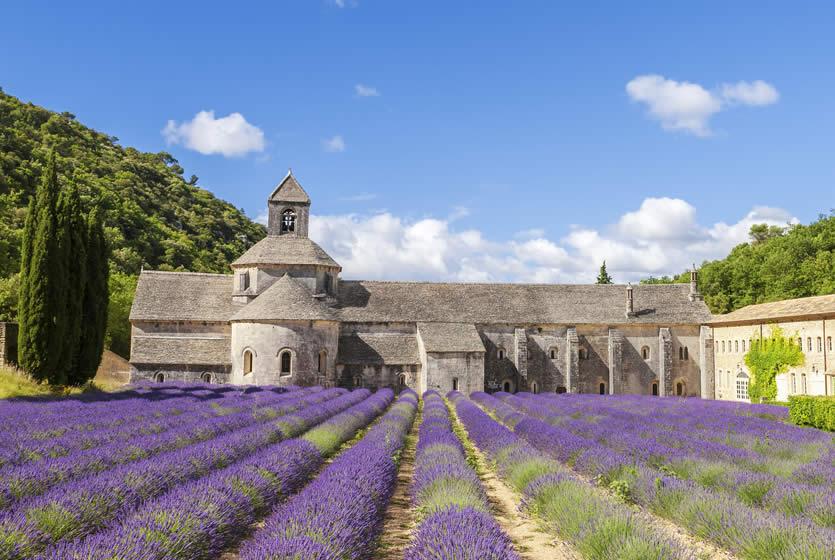 In mid-August, the fields of Provence turn fragrant and purple with blooms of gorgeous lavender.

On August 15, the town of Sault puts on its yearly lavender festival.

All kinds of events take place on this lovely day, including a lavender cutting contest and a demonstration of the lavender distillation process.

There’s nothing quite like the incredible sight of lavender fields that extend as far as the eye can see.

Best of all, you can even pick your own lavender right from the fields for free! 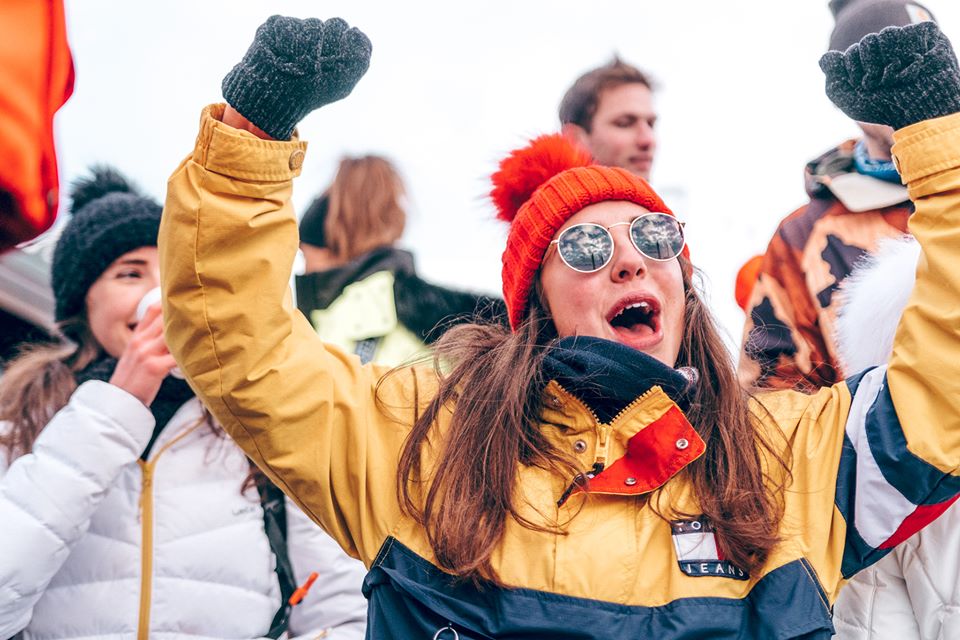 This is the ultimate festival for anyone who loves winter sports.

Every year in mid-December, the town of Les Deux Alpes near the Swiss border hosts a giant ski party in the mountains.

Enjoy skiing and snowboarding on over 200 kilometers of stunning Alpine terrain, as well as tons of other activities including mountain yoga and snowmobiling. You can also take advantage of the seemingly endless live concerts at many of the local bars and clubs, which are open all day and all night.

Après-ski — After-ski (A popular term in both French and English for any social activity following skiing.) 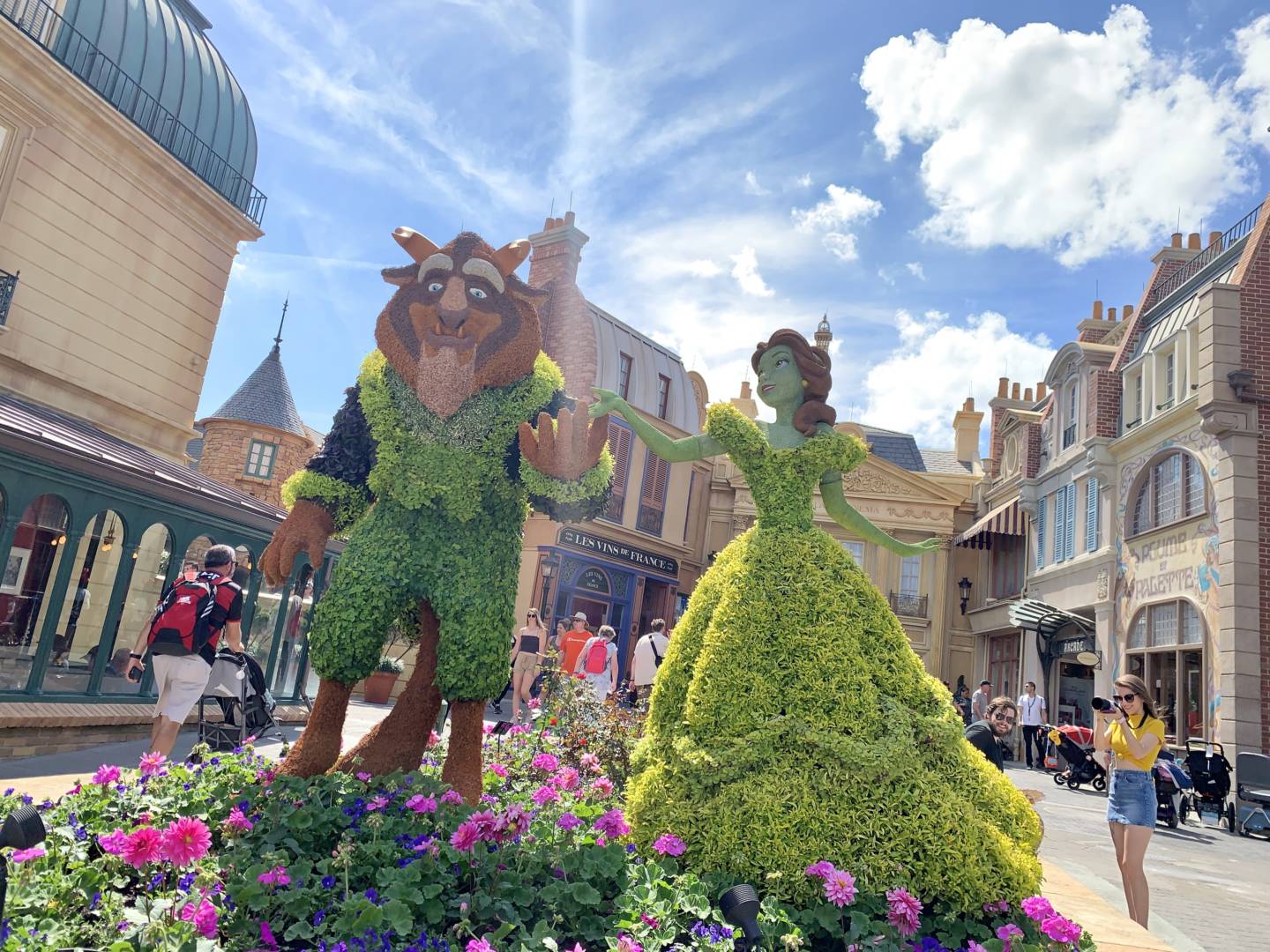 Tucked away in the picturesque Loire Valley, the town of Chaumont-sur-Loire hosts the world’s most eagerly anticipated garden festival every year from mid-April to October.

Landscape artists from all over the world come together to create 30 themed gardens, which are then opened to the public.

If you are planning to visit the Loire Valley, this garden festival will be bouquet caught from the bride!

So, are you ready to get festive?

Put one of these French festivals on your calendar and prepare for a magical and memorable French experience!