And They Learned Happily Ever After: 5 Cherished Fairy Tales in French That Learners Love

When you think of fairy tales, you might think of Disneyland, Cinderella’s castle or dress-up parties as a child.

But when the French think of contes des fée (fairy tales), they think of Charles Perrault, the creator of the precious fairy tales that have become vitally important to Western culture.

So who was he, and which Perrault fairy tales should find a place in your study of French?

In this article, you’ll find out some fascinating information about the author, learn how reading his work can boost your French skills and discover some of his best-loved fairy tales.

The Man Behind the Stories

Perrault was born in the early 17th century in Paris, the fourth son of a Parliament lawyer. He was originally trained as a lawyer, but dabbled in poetry and short stories before creating what we now know as the fairy tale by way of a book in the late 1660s. 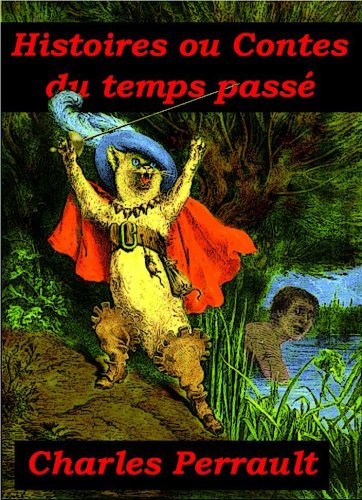 The first of the stories now considered bedtime staples and Disney classics, like “Cinderella” and “Little Red Riding Hood,” were included in the volume of stories he wrote at age 67, “Histoires ou contes du temps passé, avec des moralités: Les Contes de ma Mère l’Oye” (Tales and Stories of the Past with Morals: Tales of Mother Goose).

What’s interesting about this book is that these stories were well-known folk tales, but Perrault wrote them down, elaborated on them and gave them literary legitimacy.

Before writing this famous volume, which included the creation of Mother Goose (the “author” of the fairy tales), Perrault wrote stories for Louis XIV and was appointed to L’Academie française in 1671. His writing became quite famous at the time, and, of course, his stories are still just as famous today. 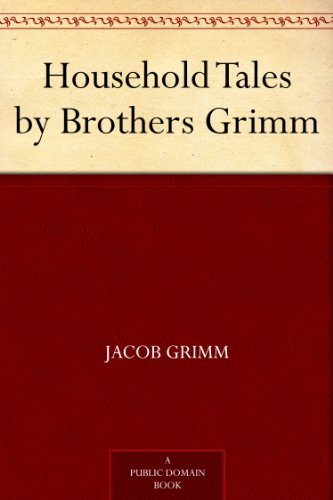 It’s true that our present-day adaptations are often quite close to Perrault’s original versions, though some versions reflect the Brothers Grimm tales more closely. In whatever form we find them, though, it was Perrault who wrote them into our history.

What’s also great about Perrault fairy tales is that you can actually use them to improve your French. Though they might be familiar stories, they can be useful for learning new vocabulary, getting to know French morals and brushing up on French history.

How You Can Learn French with Charles Perrault, the Master of French Fairy Tales

When you’re already familiar with the plot of a story, your brain is automatically given a break from trying to understand what you’re reading—and you can shift gears entirely.

As you’re getting into the story, reading about Cinderella dealing with her angry stepmother, you can underline words that are unfamiliar and use programs like WordReference to find their English equivalent either during or after reading.

There’s also FluentU if you want to see how the words work in different contexts —after all, you’ll probably want to use them without sounding like you’re from a fairy tale yourself. FluentU is a program that uses authentic videos as contextual French lessons. It’s something to consider using alongside your Perrault-based studies, because learning everyday French is a crucial part of understanding and being understood.

And since Perrault wrote these stories for children, they’re perfect tools for both easily understanding the story and adopting new vocabulary words as you go.

Though Perrault intended to entertain with his stories, he actually hid away some serious lessons inside them. As you note down new vocabulary, look for the moral of the story—or, in some instances, the hidden meaning.

In “Little Red Riding Hood,” Perrault was actually using the wolf as a metaphor for men who prey on young girls in the forest. Perrault warns:

One English translation of this, though not literal in order to keep a rhyming scheme, is:

Little girls, this seems to say, Never stop upon your way, Never trust a stranger-friend; No one knows how it will end. As you’re pretty so be wise; Wolves may lurk in every guise. Handsome they may be, and kind, Gay, and charming—nevermind! Now, as then, ’tis simple truth—Sweetest tongue has sharpest tooth!

Perrault wrote these stories intending to amuse, but he wrote about what he knew and he was inspired by the culture of the time and the history of the country.

Sometimes, he even took inspiration from French architecture—for example, the Loire castle Chateau d’Ussé inspired him to write “Sleeping Beauty.”

Also, as I mentioned earlier, these stories were folk tales passed down for generations—it was simply Perrault who wrote them down. So the stories themselves reveal much about what kinds of stories were told to French children for many years.

Now that you know what to learn while reading, what kinds of stories should you expect as you page through “Tales and Stories of a Past with Morals”?

Perrault included many different tales in his volume, but some of his most popular ones are below. Clicking on the title will lead you to a website where you can read the full story for free, en français. 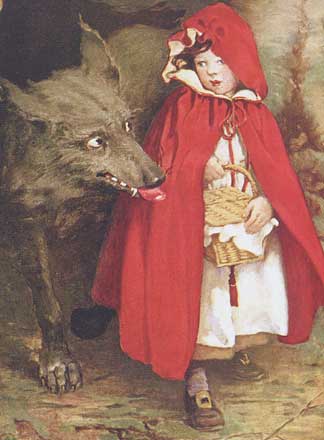 As mentioned earlier, this story’s main intent was to warn girls about what men really want. A young girl, “la plus jolie qu’on eût su voir” (the most beautiful girl that had ever lived), takes some cake and butter to her grandmother, and then the story begins.

She runs across a wolf in the forest, who asks her where she’s going. Foolishly, she tells the wolf where her grandmother lives. The wolf runs ahead of the girl, devours her grandmother and dons her clothes. When the girl arrives, she finds that her grandmother looks peculiar and finds out something rather shocking.

While you might think you know everything there is to know about this story, this version takes some turns you might not have expected! 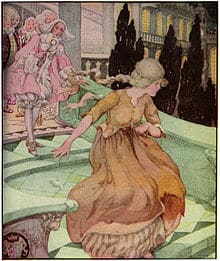 Ah, Cinderella. A young girl’s precious father, a widower, marries a woman “la plus hautaine et la plus fière qu’on eût jamais vue” (the proudest and most haughty woman that was ever seen). The evil stepmother, as we call her in English today, makes this girl the housemaid, meanwhile treating her two daughters like princesses.

In Perrault’s version of the story, the father is still alive, and, as Perrault puts it, “sa femme le gouvernait entierement” (his wife governed him entirely). When Cinderella is banned from going to the king’s ball, a fairy godmother shows up and saves the day.

The prince falls in love with her, but when the clock strikes midnight, she must hurry home before her clothes turn back into rags. She leaves a shoe on the steps of the palace, and the prince takes it and begins looking all around the kingdom for the foot that fits it, for she will be his princess. When the prince comes to their house and she tries on the shoe, she’s revealed as the woman the prince fell in love with.

Perrault has two morals in this story: Graciousness is more important that physical beauty, and a godmother or godfather is important to success in life. The latter, it seems, must have been an important French custom. 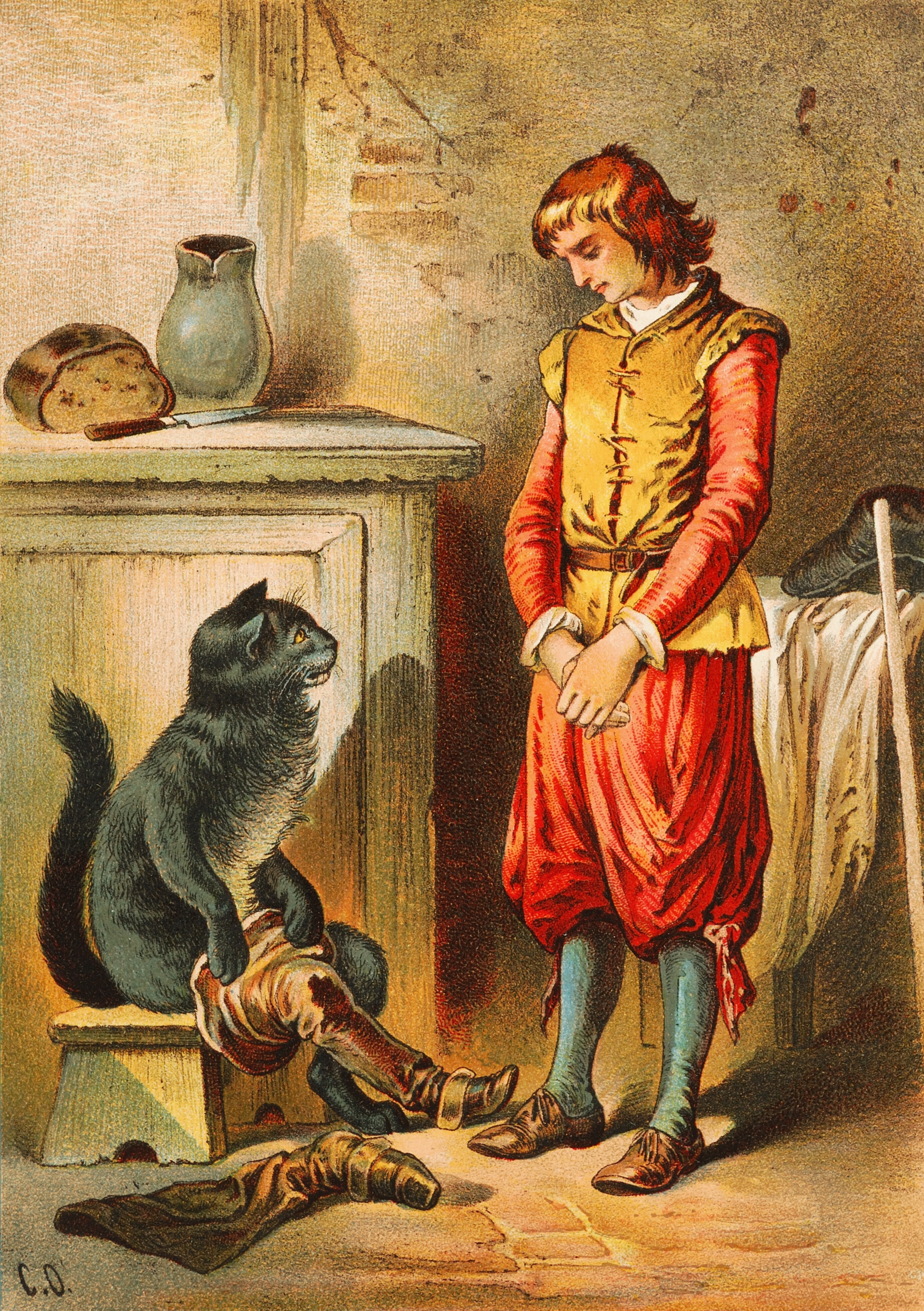 I can’t think of anything else but DreamWorks’s version of Puss in Boots in “Shrek” when I hear this name. But Perrault gives him his own story and his own moral!

The story begins with one of three sons receiving nothing but a cat as his inheritance when his father dies. The cat asks his master for a bag and some boots, then begins to catch game and give his findings as gifts to the king, telling him they were a present from his master, establishing a relationship and favor with the king.

When the king was passing by in his caravan with his beautiful daughter in tow, the cat told him to go bathe in the river along their route. He screamed out “Au secours ! Au secours ! Voilà monsieur le marquis de Carabas qui se noie !” (Help, help, the marquis of Carabas is drowning!) at just the right time for the king to take note of the man in the river.

What happened next was something he potentially could have never done without the cat by his side.

An ogre like Shrek does make an appearance in this story, as well. Perrault’s two morals: Diligence and ingenuity are worth more than wealth acquired from others, and if a miller’s son can win the heart of a princess in so short a time, it must be due to his clothes, his appearance and his youth. Again, the latter might be a reflection on Perrault’s social class and the importance of dressing well. 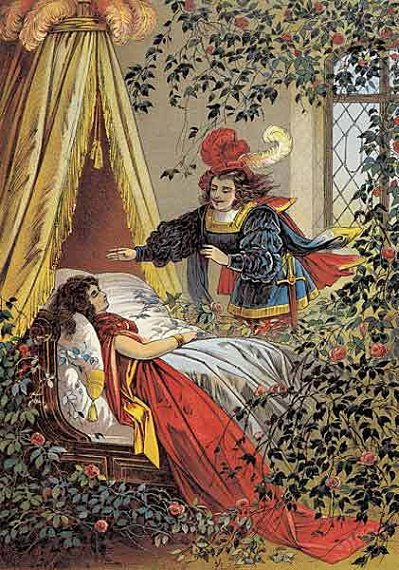 This is the story of a young princess who was cursed by a fairy upon the celebration of her birth to one day prick her hand on a needle and fall into a deep slumber. On her fifteenth birthday, she stumbled upon a woman in the castle spinning wool. It was then that she pricked her finger and fell asleep.

A hundred years later, she wakes up to a handsome prince, who marries her and welcomes her into his royal family.

Though this is often where the story ends, Perrault continues on to reveal a secret about the prince’s mother that would shock any reader. Pkyerrault’s moral here is that there should be no rush to find love, for it might take a long time to find the perfect match. 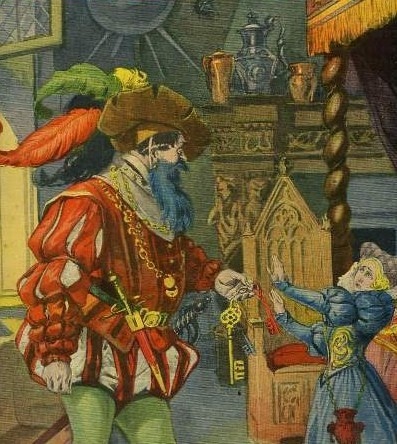 This story begins with the title. A man has a blue beard that’s so ugly, no one wants to marry him.

He woos a young lady by bringing her and her family to his country house for a week-long party. The girl is soon swayed by his charm, thinking that perhaps his beard isn’t so bad after all. But little does she know that he has some skeletons in the closet.

When Bluebeard leaves on business and entrusts her with his keys, she defies his orders not to snoop and ends up discovering a grave secret. But this story doesn’t exactly end like in any expected way. Perrault’s moral is twofold: Curiosity can often lead to regret, and, a little more humorously, whatever the color of a husband’s beard, the wife of today is always the one in charge.

Perrault wrote many other stories as well, and they’re all filled with magic and morals. Enjoy exploring his tales—and improving your French while you’re at it!