To vs. For: What’s the Difference? Learn How to Use “To” and “For” in English Sentences

Look at these two sentences:

Can you bring some flowers for Mary?

Can you bring some flowers to Mary?

These sentences have different meanings. But maybe you can’t see why.

Some pairs of similar English words like “to” and “for” can be difficult for English learners.

In this post, I’ll explain the main differences between “to” and “for.”

How to Practice Using “To” and “For”

Learning grammar rules isn’t enough. To properly learn the differences between “to” and “for,” you need to practice. Below are some of the best resources.

Online quizzes and exercises are a quick and efficient way to learn English words. They help you check your English learning progress.

UsingEnglish has a short quiz of 10 questions for beginners, which also comes with a printable worksheet.

Autoenglish.org offers a slightly more difficult exercise. If you do well in it, you’ll never be confused between “to” and “for.”

Finally, both English Super Site and To Learn English have 15-question quizzes that cover a variety of situations where “for” and “to” are commonly used.

Another important way to get to know “to” and “for” is to hear them in use. Use the FluentU language learning program to see the words being used in native English videos like movie clips, interviews, inspirational talks, short cartoons and more. 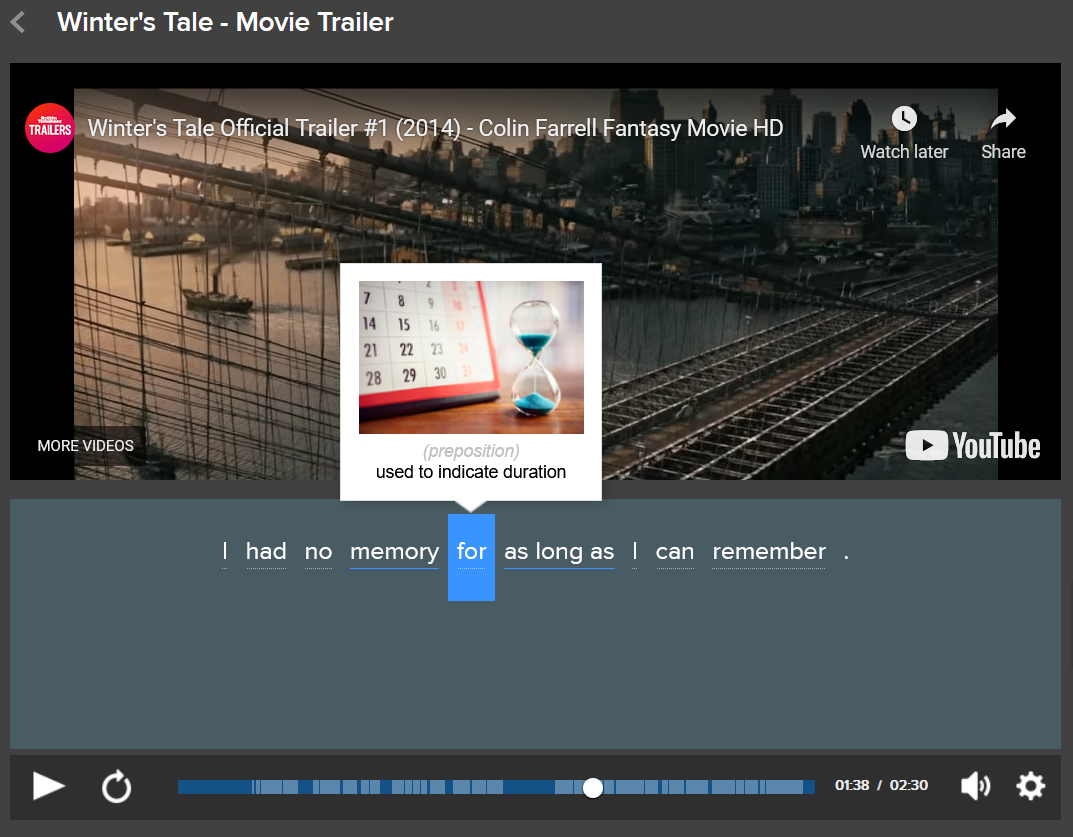 Search for either word (or any English word) to see videos where it’s being used. FluentU’s contextual dictionary will also show you different examples for different meanings of each word. For example, you can see the word “for” being used to show duration (“for how long”), purpose (“for what reason”), direction of action (“for you”) and all other meanings of the word.

For each meaning, you can see example sentences and video clips from FluentU videos where the word appears naturally. Plus, you can use FluentU’s personalized quizzes to memorize different ways to use “to” and “for.” If you’re on the iOS or Android apps, you can even practice saying these words out loud in speaking questions.

Thanks to the context of all the videos and the detailed dictionary on FluentU, you’ll never confuse the two words again.

Learn How to Use “To” and “For” in English Sentences

“To” and “for” are commonly used as prepositions. Changing a preposition, such as using “to” in the place of “for,” can completely alter the meaning of a sentence.

Sometimes, if you use the wrong word, you’ll get a sentence that isn’t grammatically correct.

So, let’s begin by talking about one of the most common (and most confusing) uses of “to” and “for”:

Using “To” vs. “For” to Talk About Reasons and Purposes

We frequently use the prepositions “to” and “for” to talk about why somebody did something. Let’s look at a few examples.

Why did you travel to London?
I traveled to London to improve my English.

Why did she buy a cake?
She bought a cake for her brother’s birthday.

Why are you going home?
I’m going home to feed my cats.

In sentences like these, “to” and “for” mean the same thing, but they aren’t used in the same way.

For example, if you said, “I’m going home for feed my cats,” that would be incorrect. You need to use “to.”

Let’s look at some more examples of “to” and “for” used side-by-side:

Once you’ve learned that rule, using “to” and “for” becomes much easier. Now that you’ve mastered the hardest part, let’s look at some other uses of “to” and “for.”

Other Uses of the Word “To”

Here are some of the situations where we commonly use “to.”

Use “to” when talking about movement or a change in direction

“To” is used as a preposition if there’s movement, a transfer or a change in direction from one point to another.

I need you to take these books to Mary.

We are going to Paris next Tuesday.

In the first example, “to” is used to suggest a transfer of the books from “you” to “Mary.” In the next example, “to” indicates (shows) a change of place from the speaker’s location to Paris.

Use “to” with English infinitive verbs

Any English verb in the infinitive form will include the word “to.” You will frequently see this construction in English sentences.

Nina loves to talk on the phone.

When do you want to eat dinner?

Use “to” when comparing two things

“To” is often used in comparing two things and expressing one’s preferences (likes).

I prefer coffee to tea.

Other Uses of the Word “For”

Now, it’s time to learn about the word “for.” “For” is used as both a preposition and conjunction, but it’s much more common as a preposition.

Let’s learn when to use it!

Use “for” when expressing thanks or gratitude

If you want to thank someone, you’ll usually use the word “for” to explain why you’re thanking them.

The word “for” will be followed by a noun or gerund (a verb that ends with “-ing”).

Thank you for teaching me to play the guitar.

Thanks so much for the new shoes!

Matthew thanked Brian for coming to his birthday party.

Use “for” when talking about a duration of time

“For” is also used to talk about a length of time during which something happened.

I waited at the station for two hours.

They have lived in Ohio for eight years.

We’ve known each other for a long time.

Use “for” when expressing support and agreement

“For” is used to indicate agreement with or support of a cause.

Are you for or against the women’s movement?

I’m all for increasing taxes.

To vs. For: Test Your Understanding with a Simple Quiz

Now it’s time for a short quiz to test your understanding of when to use “for” and “to.” Fill in the blanks with the right word and check with the answers that are given at the end of it.

I hope the differences between “to” and “for” are clear to you now.

If you make mistakes, that’s completely okay. I made a lot of grammar mistakes when I first started out.

Mistakes are fine, as long as you learn from them. Just keep studying. Come up with your own examples and use the words in your daily conversations. Over time, practice will increase your confidence. Soon enough, you’ll become a fluent English speaker!