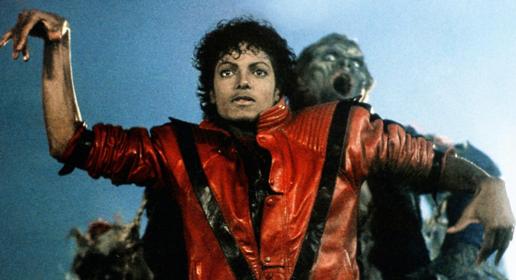 You put on your headphones.

The music begins to play.

You feel like singing, dancing, laughing and moving around.

There is no greater feeling than listening to a fun song that you love!

So why not bring that enjoyment to learning advanced English vocabulary words?

Yes, you can use flashcards, watch the news, write your own sentences and even read a book.

But there is no better way to learn than when it feels effortless (easy).

So make learning advanced vocabulary easy by listening to your favorite bands and artists!

Why Should You Learn Words with Songs?

Now, let’s get to the list of 12 advanced vocabulary words that we are going to learn from some of the most popular bands and artists of all time.

In the song “Thriller,” which is one of Michael Jackson’s most famous songs, he uses paralyzed to mean that someone is too scared to move.

“You start to freeze as horror looks you right between the eyes. You’re paralyzed.”

Song: “Don’t Stop ‘Til You Get Enough” by Michael Jackson

Melting has two main uses. First, it means that something is so hot in temperature that it is turning into (becoming) a liquid.

Second, if someone makes your heart melt, it means that you are falling in love with them. This is a more advanced use of this word.

Michael Jackson uses it to mean that a girl is making him melt from how much he loves her. He is falling in love with her.

“Touch me and I feel on fire. Ain’t nothin’ like a love desire (ooh). I’m melting (I’m melting) like hot candle wax.”

Song: “Rock With You” by Michael Jackson

A groove is a long, narrow dip that causes something on it to move in a certain direction. At least, that is one advanced definition of this word.

In music, a groove is the rhythm of a song. As in, “Michael Jackson’s music always has a really nice groove.”

“There ain’t nothing that you can do. Relax your mind. Lay back and groove with mine. You gotta feel that heat. And we can ride the boogie.”

As you can see here, groove means to mean settle in, or to fall into a familiar or comfortable way of doing things. Michael Jackson is telling someone to let their mind groove (get comfortable) with his.

When someone is so scared that they are shaking, they are trembling.

This is a great advanced vocabulary word because it sounds much better than just saying “shake” from fear. The person was so scared they were trembling in fear.

“Let’s Dance” is one of David Bowie’s most recognizable (well-known) songs of all time and rightfully so. It is really happy and fun to listen to.

Bowie uses the word tremble to make a simile (or a comparison). Here, he is saying that the love between him and his lover might make the other person tremble. Perhaps they love Bowie so much that they feel weak!

“…my love for you. Would break my heart in two. If you should fall, into my arms. And tremble like a flower.

Squawking is that really annoying sound some birds make when it sounds like they are dying or suffering. It is also sometimes called a shriek. It is a very harsh (rough) noise and is not exactly pleasant.

In “Moonage Daydream,” an upbeat and fun song from one of David Bowie’s most well-known albums, “The Rise and Fall of Ziggy Stardust and the Spiders from Mars,” Bowie uses the word squawking to make a simile (or a comparison).

In this case, he is comparing the way someone is talking to the annoying squawking of a pink monkey bird, whatever that is.

Ground Control is a phrase used by astronauts to refer to the people on the ground that are helping them in their flight into space.

Ground Control, as the name suggests, is a team that controls things from the ground that the astronauts (space travelers) cannot control from up in space.

This exciting, modern song was the beginning of Bowie’s rise to fame in the early 1970s.

Wail is similar to squawk because it means some sort of scream or yell. However, wail is different because normally it refers to someone who is yelling because they are happy or sad.

In “Jailhouse Rock,” Elvis uses wail to mean that a group of prisoners were ecstatic (very happy) from singing along to some upbeat music.

“The warden threw a party in the county jail. The prison band was there and they began to wail. The band was jumpin’ and the joint began to swing.”

When someone is not fully trusting of another person or of some sort of idea, they are suspicious.

The king of rock (Elvis) uses suspicious in the title to refer to two lovers who have become suspicious of each other and now always have suspicious minds. Both are not sure if they completely trust what the other is doing all the time anymore.

In classic Elvis fashion, he uses flaming to refer to how a girl makes him feel. In this case, his brain is flaming from how hot she is, and how much he wants her.

“Girl, girl, girl. You gonna set me on fire. My brain is flaming. I don’t know which way to go.”

An illusion is something that distorts (messes up) our view of an image or of reality until we think that something else completely is going on. Often they are used in magic tricks to create the illusion of magic. Also, illusion can be used to refer to a lie.

In this case, illusion is used to refer to how we see love.

It means that sometimes someone comes along in your life that makes you question what you think of love. This person makes you reevaluate (think over) what you already have decided love is. And they can completely replace our view of love, or just slightly alter (change) it.

“Did she make you cry. Make you break down. Shatter your illusions of love.”

A reflection is the opposite image of something. When we look at ourselves in mirrors, we see our reflections.

Also, we are looking at our reflection while taking a selfie (a picture of yourself).

Reflection can also be used to mean that we see ourselves in someone or something else that isn’t us. For example, in “Landslide,” the band says snow covered hills reflect who they see themselves as.

The word reflection is a word that is often used in metaphors (a way to compare something poetically to something else).

“I took my love and I took it down. Climbed a mountain and I turned around. And I saw my reflection in the snow covered hills. Till the landslide brought me down.”

Song: “The Chain” by Fleetwood Mac

A chain is often used as a way of expressing a feeling of being alone and that there is no way out.

In the case of “The Chain,” Fleetwood Mac is using it to refer to the never-ending relationship between two people that a marriage represents.. While writing this album, the members of the band were going through hard times in their relationships. This was the inspiration for much of their music at the time, “The Chain” included.

And that’s it! Did you learn all those great words?

Play those fun, hit songs until you do.