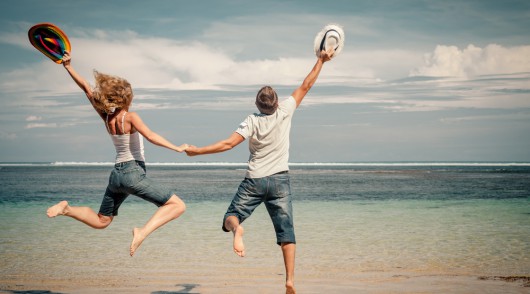 Maybe you already know the most useful English idioms and slang.

And maybe you’re no longer making the most common ESL grammar mistakes.

In that case, one of the best ways to improve your English vocabulary is to learn new ways to say the most frequent words.

One of the most common words is probably “happy.”

When you’re done with this post, you’ll be able to impress your friends with how well you speak English.

Because you’re going to be able to tell people what kind of “happy” you are.

So without further ado – here is our advanced English vocabulary post on 16 kinds of happy.

The music in Pharrell Williams’ song “Happy” lets you feel the definition of the word “happiness.” You don’t have to just rely on the lyrics. Happy is that upbeat feeling of contentment that seems to spread across your body. You smile. You want to be kind to strangers.  Your shoulders are relaxed.  Your hands are open.

Happy is the most common word for a positive emotion. What makes us happy though differs from person to person. The Internet show SoulPancake gets kids to talk about their feelings and what makes them happy. A pie of pie, sunshine, and a kiss seem to do the trick.


Happy as a feeling lends itself to lots of idioms:

Happiness on Cloud Nine probably came first from Buddhism. At the ninth level towards enlightenment, a being is said to live on a bright cloud where selfishness washes away. Dante gave a Christian version of Cloud Nine in Paradise: That’s the highest level before the place where the Divine (God) lives.

Seventh Heaven may come from Islamic and mystic Jewish traditions. The Divine and the angels are said to dwell in this seventh or highest level of heaven. Seven also is considered a lucky number. Being happy, of course, is lucky.

That’s pretty easy. When someone is tickling you, you laugh. Laughing makes your face turn pink.  A Ukrainian-American musician Jack Shaindlin wrote a fun little song called I’m Tickled Pink back in the 1940s. You can still hear it on Galaxy News Radio.

Another easy one. You are so happy you literally jump up and down. Joy is something that springs from deep inside you. Even cows can jump for joy. Really. A German gif (short video that repeats itself) has been making the rounds on the Internet. U.S. National Public Radio shared the story of the cows so happy to be released outside that they literally spring into the air.

Australians sponsor a huge annual international competition for baristas (coffee makers) to combine coffee with alcohol. It’s called World Coffee in Good Spirits Championship. Competitors come from as far as Slovakia, Ecuador and Indonesia. They better be in good spirits after going all that way to make a drink.

Happy as a Clam

This one is just plain weird. How do you know if a clam is happy? Well, it turns out that this idiom is actually part of a longer sentence: Happy as a clam in high water. Clams seem to like high water when their shells are all covered, so maybe it is safe to say they are happy. Back in 1840, John Godfrey Saxe wrote the poem “Sonnet to a Clam.” He laments (is sad) that clams are reduced to boring similes (descriptions) and says he must write a song of their simple story. In my opinion, it sounds like old Saxe suffered from another idiom: Too much time on his hands.

The last two idioms are not necessarily positive ones even if they are talking about being happy. Slap happy means you are tired, really tired. You are so tired that you are doing silly things, like slapping yourself.  Slap happy appears to come from boxers back in the 1920s who took one too many blows to the head and became confused from a head injury. Punch drunk means the same thing: You have been hit so many times that you are starting sound like you have been drinking too much alcohol.

You do not want to be called trigger happy. This means you like shooting your gun at people.  Sometimes it means you will shoot without paying attention to your target.  Worse yet, it means you get violent, with or without a gun, whenever someone bothers you the least little bit.

British Channel 4 came up with a play on words and called its comedy program Trigger Happy TV. There are no guns involved, just comedians making jokes very quickly and pulling pranks on unsuspecting people walking down the streets of London.

Let’s start with merry, as in Merry Christmas. It means exactly the same thing as happy, which is why you will sometimes hear the phrase in December, “Merry Christmas and Happy New Year.” You could reverse the happy and merry but why break the habit. You could also go out for a beer (or a pint or a lemonade) with friends and say, “Let’s eat, drink, and be merry.”

Another phrase you might hear: “I’m delighted to meet you.” Delighted is a fancy way of saying happy. Delighted means “it gives great pleasure.” If you go to the trouble to say the word delighted, you probably are going bow your head slightly as you extend their hand to meet someone. This phrase is best used in very formal places. If you are a man, you should probably be wearing a tie if not a tuxedo.

Blessed is a religious version of happy. Blessed means favored by God, particularly in Christian traditions. It can be used as a title for someone nominated for sainthood in the Catholic Church. It can be in reference to something considered sacred, like the Blessed Trinity. Buddhist texts also advocate the 38 Blessings or important things for living a good life, such as being kind and being around wise people.  Happiness is the result of being blessed.

Radiant is a more physical term. You are so happy that you look like sunbeams are coming out of you. Radiant is not just simple happiness, but full-scale joy. You are shining like a light. Pregnant women are said to be radiant because they are so happy about the child growing inside them.

Ecstatic is most often used as an exaggeration of happy. Ecstatic means to be in a state of ecstasy. Now, ecstasy often has something to do with sex or illegal drugs. Ecstatic, however, does not. Usually it means you are super happy because you or a friend accomplished something. “I am ecstatic you got into medical school.”

Glee usually is a type of entertainment and comes most often in a song. Glee, the American television show on FOX, comes from a high school club for students who perform on stage and have a tendency to break into song just about anywhere. The idea is that the music makes them happy. It’s hard to not smile and be happy when watching them sing.

Now there you have it: 16 ways to be happy. Enjoy!