What do the “The Hunger Games,” “Everest” and “Ant-Man” movies all have in common?

They’re all perfect for your next ESL reading class.

Believe it or not, these hit movies are the perfect companions to some of the short stories you’re already reading with your ESL students.

Here’s how to concoct the perfect movie-story mash-up in your ESL class.

Using film to both teach and learn English has long been a favored approach. If you’re a teacher who enjoys teaching with real and applicable English content such as film and TV, you’ll love FluentU.

You can request a free trial now to explore the massive library of content and additional features such as quizzes and interactive captions.

Get started with some of the study options below. 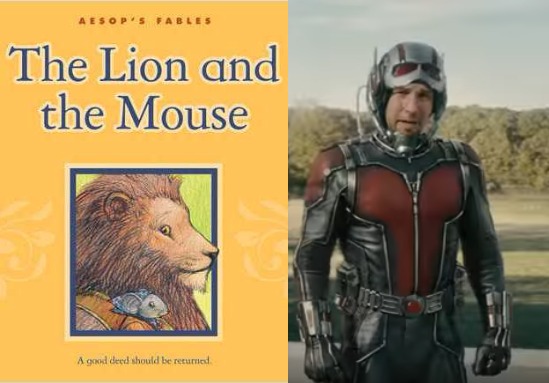 “The Lion and the Mouse” is one of Aesop’s timeless fables, in which a lion is surprised that a little mouse can be of help to him.

In “Ant-Man” a super-suit makes its wearer shrink in size but grow in strength and agility. Watch this movie and let your students see how very powerful someone small can be. What are some big advantages to being small?

“The Lion and the Mouse” is a very short story intended for beginner readers. Although the sentence structure is fairly simple, some of the vocabulary will be unfamiliar to your students. Underline or highlight any new vocabulary before they read the story.

Have your students read through the whole story one time. Then give them a list of synonyms for the underlined words. Challenge students to match each underlined word with a more familiar synonym based on the context in the story. If you like, have students check an English-only dictionary to see if they matched each word to the correct answer.

As a class, discuss the following questions:

After having a good discussion as a whole class, have students pair off and work with partners. Ask each student to share a time when they were wrong about someone else, or when someone else was wrong about them because of their appearance.

Do you want to teach English while traveling the world?

Get training and credentials that will boost your career?

With high-quality, accredited courses at a reasonable price? 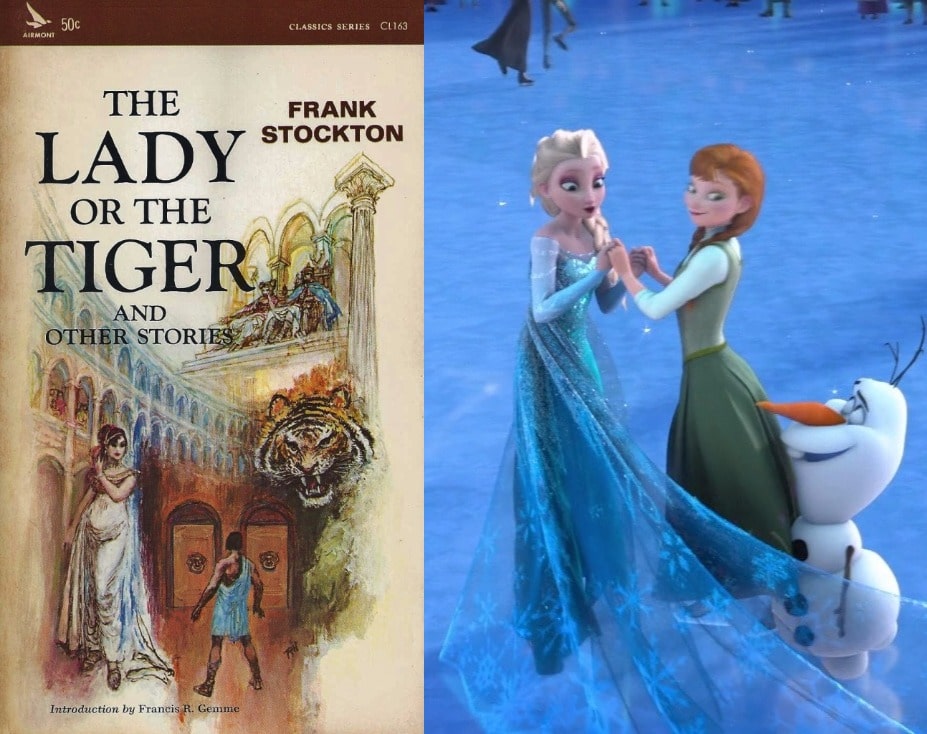 Can a barbaric princess give up the man she loves to another woman’s arms? How can anyone give up someone they love when they’re hurting themselves in the process? “The Lady, or the Tiger?” asks those questions, but it leaves the readers to decide the answers for themselves.

“Frozen” is an instant Disney classic in which two sisters struggle to be friends. One sister, Elsa, is gifted with special powers—and with those powers hurts her little sister, Anna, to the point where Anna’s life is in danger. As a result, Elsa must decide between isolating herself from Anna to avoid future harm or staying close by and risking Anna’s life.

Can Elsa give up her friendship with Anna? Is staying apart worth the pain for both of them?

Back to “The Lady, or the Tiger?”. This 2747 word-story by Frank Stockton is all about character and sacrifice. A princess must advise her lover to choose one of two doors. One door hides a beautiful woman who he would instantly have to marry. The other door hides a ferocious tiger who will rip him to shreds. The story ends with a question to the reader—which door do you think the princess directed her lover to?

This story is best for intermediate to advanced students since the archaic language may pose a challenge. For students at lower reading levels, you can instead opt to provide them with the simplified version by Voice of America.

Remind students that they do not have to understand every single word that they read.

Ask some general comprehension questions after students have read the story. Then have students think about the princess. What does the text say about her personality and character? Have students read through the story again and write out everything the author says about her. Based on that information, ask each student to share which door he or she thinks the princess chose.

Have your students discuss the following questions in groups of three or four.

Have each student introduce that person to the class. Students should bring in a picture of their loved one and tell the class what that person is like and why they’re so important to them. 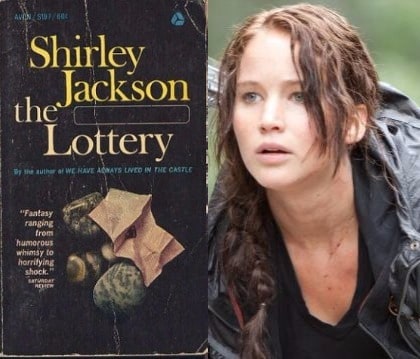 In “The Lottery,” no one wants to win, but why? This small town holds a lottery every year, but the winner is anything but lucky.

“The Hunger Games” is a modern tale of a lottery no one wants to win. In it, Katniss Everdeen volunteers to take the place of her younger sister Prim, who has just won the lottery. This lottery elects children to fight each other to the death until there’s only one survivor out of the 24 contestants.

In “The Lottery,” a 3773-word story by Shirley Jackson, a small town holds a yearly lottery. Unfortunately for the winner, the prize is being the human sacrifice. Several times throughout the story, the author talks about tradition.

Have students pay attention to how Jackson builds suspense throughout the story. Ask students to share some traditions people observe today. Do any of these seem unnecessary or antiquated?

In both the movie and the story, winning the lottery is a very bad thing. The two lotteries are similar in that way, but they also differ. 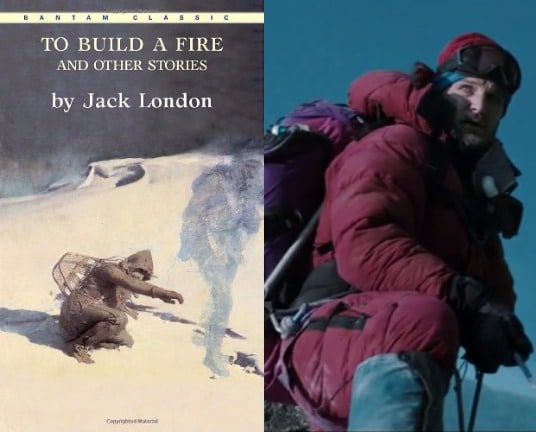 A man’s survival depends on his ability to build a fire in this story of the same name. Will he win the battle against the impossible terrain? Or will Mother Nature win and take his life in the process?

One of the most challenging feats a person can do is climb Mt. Everest. In “Everest,” a climbing party must survive in the wake of a devastating snow storm. The environment becomes their opponent as the group tries desperately to survive.

We often talk about four types of conflict in literature: man vs. man, man vs. society, man vs. self and man vs. nature. In the 7176-word story “To Build a Fire” by Jack London, the main character makes several attempts to build a fire in the bitter wasteland that threatens to kill him.

Point out to students that this conflict is clearly man vs. nature. In many of his writings, the famous American author Jack London shows humankind’s battle against the tough terrain in the world’s coldest places.

Have students note the different attempts the man makes to build a fire. How many strategies does he try? What is the fatal flaw in each attempt?

In the story, the protagonist makes several attempts to solve his problem.

When writing about a problem, one strategy is to list multiple possible solutions. In this type of essay, the writer addresses each solution and its pluses and minuses in one paragraph before making a recommendation for the best solution in the conclusion. Have students write a problem/solution essay that follows this structure. They could write about the events in the movie, those in the story or another problem of their choice. 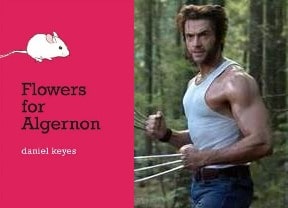 In “Flowers for Algernon,” a man named Charlie is given a drug which make him intelligent for the first time in his life, but the drug fails and his intelligence is taken away.

In “X-Men: The Last Stand,” enemies of the mutants develop a serum which will “cure” them of their mutant characteristics. Some people take the cure and develop it into a weapon to be used against the mutants, so their powers can be taken away at another person’s whim. When Mystique is hit by a cure dart while rescuing her closest friend and ally Magneto, he says to her, “You’re not one of us anymore” before he abandons her.

In this 11,745-word story, Daniel Keyes shows Charlie’s increasing intelligence through his first-person writing. Your ESL students may struggle with the errors Charlie makes as he writes, though they can try sounding them out by reading out loud.

Try having students read the story from beginning to end, noticing how the error count decreases and then increases with each journal entry. If you like, have students practice their English proofreading skills by correcting Charlie’s errors in one or more entries.

Have students note the errors Charlie makes as he writes. After reading the entire story, have students discuss the following questions:

Cochlear implants are a surgical/mechanical device which can enable deaf people to hear for the first time in their lives. Many parents of newly born deaf children are encouraged to have the surgery for cochlear implants for their children. In essence, these parents decide whether or not their children can hear. Some members of the deaf community are against doctors suggesting the implants, saying that being deaf is what makes some people unique. Some also say that parents do not have the right to make the decision for their deaf children as to whether they’ll hear or not.

Hollywood has nothing on the authors of these classic ESL short stories.

However, when you blend blockbusters with these stories, the result is something very exciting.

These mash-ups aren’t only fun for your students—they’ll also help them understand the stories better than ever before.

They’ll gain a deeper and more nuanced perspective of the problems their protagonists face.

Give these mash-ups a try in class!