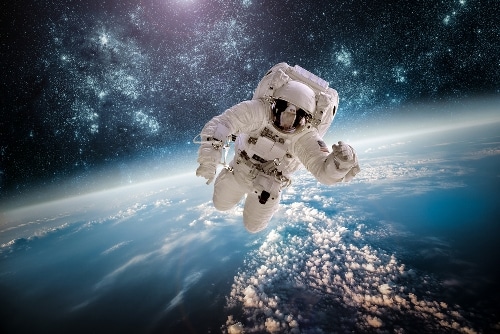 How many times have you done that same old restaurant role play?

How about the one where people are waiting in line? The post office one?

Role plays help your students overcome the stage fright they experience when using English. The themes can sometimes seem mundane, though.

You can shake up your role play activities by putting your students in bizarre situations, offering them weird personalities to portray and planting seeds of peculiar themes of conversation.

These weird role plays not only break up the routine, they also help distract your students from timidity when practicing. Just remind them, weird people have conversations too!

Location: Participants are visiting or working on the International Space Station.

Personalities: Astronauts, of course, but add other types of people who might end up on the space station, such as:

Situations: Being enclosed on a vehicle that travels at thousands of miles an hour at zero gravity can lead to some pretty odd situations:

Preparation: Pick some odd things from your bag of props and encourage your students to pretend they are items appropriate to the locale and situation:

Language Used: Depending on the situation you present, your students may be able to use:

2. Lost in the Catacombs of Paris

Location: Your students have strayed from the guided tour of the Catacombs of Paris into uncharted tunnels, full of humidity, bones, rats and spiderwebs.

Personalities: Besides the usual tourist guides and tourists, you could find a variety of other types of people wandering through the catacombs:

Situations: Catacombs are cold, dark, humid places, and those of Paris are known for being a labyrinth. Some of the situations your students experience could include:

Preparation: Again, the prop bag can provide you with items that can serve you. You’ll probably want at least one flashlight, maybe with really weak batteries, so you can turn out the lights and create an eerie atmosphere.

3. Eating Out at the Freaky Fast Food Joint

Personalities: Because the place and the food is so weird, the people can actually be pretty normal:

Situations: The situation is reacting to food that isn’t familiar. This shouldn’t be hard, as many students may find a foreign country’s food to be somewhat weird. Role play situations can be:

Preparation: Set up a table as in a restaurant, or maybe an order counter as in a burger place. Your students can create odd menus, based upon bizarre foods you’ve introduced earlier, or they can use their imaginations and create entirely made-up food options.

Location: A small, claustrophobia-inducing room with a table and two or three chairs.

Personalities: As in any crime drama, there will be cops and suspects. Some of the suspects may be guilty, some may be innocent:

Situations: Nearly any crime will suit for this role play, though you’ll want to be sensitive to your students and keep the details within cultural expectations.

Preparation: This role play will take a bit of teacher and student preparation. Begin by finding short videos of interrogations from crime films. Point out the different parts of the interrogation, as described in the informative link above.

5. Surveyed on the Street

Location: You’ve been there before. You’re walking down the street, someone comes at you with a clipboard and a smile and asks you if you have a few minutes to take a “quick” survey.

Personalities: The principle character will be the person taking the survey. The other participant will be any personality walking down the street, who should answer according to the character they’ve been assigned.

Situations: Surveys abound. Some of the most common surveys include:

Preparation: This role play can be prepared by the students. Giving them different survey topics, have them develop five to ten questions for a street survey. Generate as many different kinds of survey as students, shifting the topics to stimulate their imaginations. Go over these surveys with the entire class so they become familiar with the questions.

6. Trapped in the Elevator

Location: An elevator, obviously. You can suggest that the elevator be in any number of buildings:

Personalities: Because the people are going to be trapped in a very small space, the most fun can be had if there’s some previous conflict between the participants:

Situations: Besides the conflict, how the elevator gets stuck will add to improvisation possibilities:

Preparation: Start by chalking or taping a small rectangle on the floor to outline the dimensions of the elevator. This is the space the participants can’t move out of. Other props can be chosen from the prop bag if appropriate to the personalities.

Location: Participants are being filmed for a reality show while being on a blind date in a nice restaurant—a date which was arranged by a computer matchmaking service that purports to hook up perfect couples for eternal love and relationships. What your students won’t know (but will begin to suspect!) is that the computer program couples people with opposing personalities.

Personalities: These can be normal personalities, but you’ll want to couple them according to how incompatible they can actually turn out to be:

Situations: The situations in this role play will emerge from the conflict of two opposing personalities assuming they’ve been perfectly matched and finding out that that’s not the case. As they “get to know each other,” they should gradually discover that the computer has made a huge mistake.

Preparation: Set up your restaurant scene, table and two chairs, cutlery and glasses. While you can use your standard personality cards, you may want to prepare additional cards that add a conflict aspect:

These aren’t your standard role plays, and you may have to put more effort into preparing for them. Most can take advantage of general language that your students have practiced in the past.

What makes these situations different is that, while using the same language, students concentrate more on the wacky situation than how they’re speaking. That should bring some healthy laughter into the classroom and add to the creative use of those structures and vocabulary that might have been getting a little too routine.

Searching for fun, authentic videos to introduce your students to English conversation? Check out FluentU!

FluentU takes real-world videos—like music videos, cartoons, documentaries and more—and turns them into personalized language learning lessons for you and your students.

It’s got a huge collection of authentic English videos that people in the English-speaking world actually watch on the regular. There are tons of great choices there when you’re looking for songs for in-class activities. You’ll find music videos, musical numbers from cinema and theater, kids’ singalongs, commercial jingles and much, much more.

On FluentU, all the videos are sorted by skill level and are carefully annotated for students. Words come with example sentences and definitions. Students will be able to add them to their own vocabulary lists, and even see how the words are used in other videos.

For example, if a student taps on the word “brought,” they’ll see this:

Plus, these great videos are all accompanied by interactive features and active learning tools for students, like multimedia flashcards and fun games like “fill in the blank.”

It’s perfect for in-class activities, group projects and solo homework assignments. Not to mention, it’s guaranteed to get your students excited about English!

The full FluentU video library is available on any computer or tablet, and users can even download the app at the iTunes and Google Play store.

6 ESL Groundhog Day Lessons to Chase Away the Winter Blues
Make It Happen: 5 Strong Strategies to Teach Different Levels of ESL Students at Once