Taking On Quebec: 5 Easy Ways to Learn Canadian French in All Its Glory

You’ve read up on the grammar, and you can blow through novels and comic books.

You can even rap along with your favorite hip hop!

You feel confident and sure of yourself…until you happen upon rapid québécois (Quebec French).

What happened? Radio shows are incomprehensible, and you’re pretty sure that Canadian movie wasn’t even in French.

Suddenly, you’re drowning in an abyss, doubting everything you’ve ever learned.

This is a common scenario, maybe especially for those of us living in North America.

Despite being fairly close to the Canadian border, my university French classes hardly touched québécois pronunciation. Meeting someone from Quebec and hearing them speak for the first time can be a real eye-opener.

So, how can this be remedied?

Of course, like with any other language or dialect, it’ll take time and patience to tune your ear to the new sounds.

But don’t fret! Your French studies won’t forsake you—this’ll be far quicker than learning a new language altogether, and it’ll be a ton of fun!

One fantastic thing Quebec has going for it is its amazing folk music. It’s a great way to hear the French-Canadian accent in all its glory. I’ll never forget my first time in Quebec City with my university French club. We stopped in a pub on a Tuesday night, and many of the locals had brought their violins, flutes, drums, you name it. They proceeded to jam together late into the night while everyone sang along.

The music is catchy, so you’ll start to understand the accent fast! Before you write me off as some old fogey digging up ancient relics for you kind people to listen to, hear me out. Québécois folk music is almost reminiscent of that of the Celts—think Irish and Scottish reels and bar songs. In fact, it has mixed with the Celtic music played in Anglo-Canadian circles. There’s plenty of foot-stomping, violin runs, jaw harps and dirty lyrics to boot.

Here are a couple songs to get you started.

Pay special attention to nasal vowels—they sound very different from Parisian French, and the nasal vowels, I think, are really what characterize the Quebec accent. Words like rien (nothing), loin (far) and coin (corner) sound very roughly like “ree-ay,” “lway” and “kway,” while still having the final vowel nasalized.

Here, at least in the first verse, we don’t have any nasal vowels to watch for, but pay attention to the relaxed pronunciation. The “-aine” portion of fontaine (fountain) and dondaine (cute filler word) would sound roughly like “- ehn” in Parisian French.

In this song, however, it’s pronounced much more like “-ayn.” Note that the final “e”s of fontaine and dondaine are fully pronounced, which is common in folk songs and poetry throughout the francophone world.

Again, at first you’ll question whether the singers are really saying what the lyrics claim they are. Watch for how the words seem to collapse and slur into one another (more so than in Parisian French), and how the nasal vowels, especially in and en, sound a bit twangier.

Overall, the pronunciation of québécois tends to be more relaxed than Parisian French. The difference in accent between Quebec and Paris can be stark, but look up the rest of those lyrics and read along carefully—you’ll soon get the hang of the French Canadian accent. You’ll come to love it!

French learners often fail to realize that Quebec has its own strong film tradition separate from France. These movies can have (but not always) a strong Catholic bent, because Quebec didn’t go through the French Revolution along with France, instead breaking away from heavily Catholic culture only recently.

Movies in general are a great way to fine-tune your understanding. The dialogue tends to be closer to how people speak in real life.

You can also commit to shorter clips on FluentU, an immersive language learning program. FluentU has many native French videos like movie trailers, music videos and inspirational talks. Among these are a few videos that feature Canadian French, like clips on Quebecois rhyming, cultural tidbits like explorations of holidays in French Canada, sports clips and more. 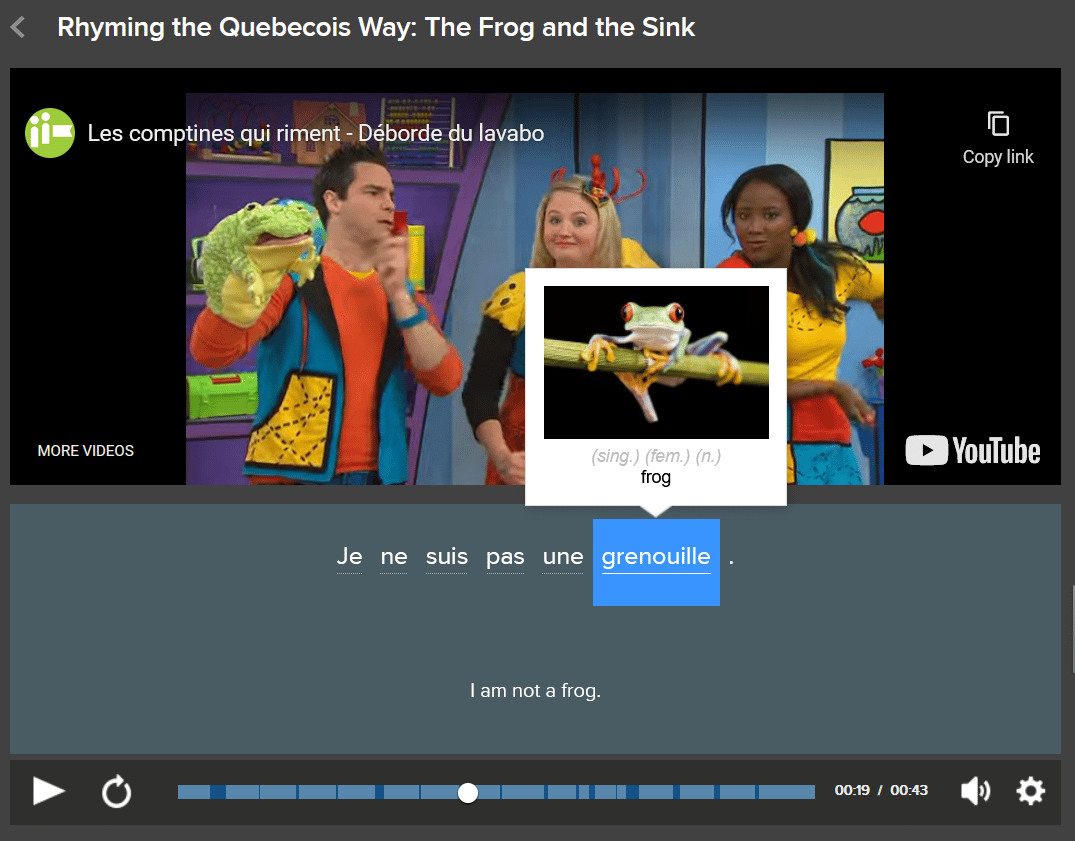 FluentU’s in-video video dictionary lets you see the definition of any word in the subtitles without leaving the video player. You can also add words to flashcard decks and study them with personalized quizzes that adapt to your level of learning. Plus, flashcards show other clips on FluentU where the word appears, so you can compare usage and pronunciations from different French-speaking regions of the world.

Movies can also offer a great challenge because especially in independent sorts of films, the actors tend to speak quietly and mumble.

Here are two suggestions to get you started. 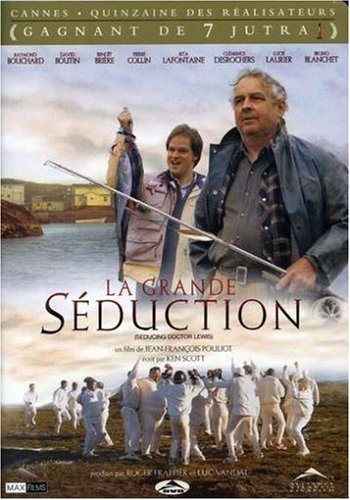 This movie is hilarious. It takes place in the tiny village of Ste-Marie-La-Mauderne, which has long been in decline. In order to lure a company to build a factory in the village, the residents need to double their population, bribe the company director and convince a doctor to take up residence in town.

The plot centers on the villagers’ attempts to get a young, sophisticated doctor from Montreal to stay in Ste-Marie-La-Mauderne. The villagers fake that they appreciate the finer things in life, like cricket and jazz, when really they’re coarse people who can’t get enough hockey. 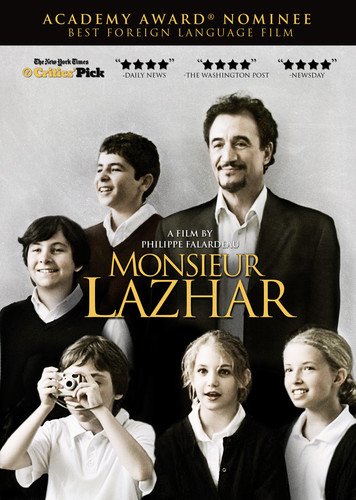 Here’s a darker film about an Algerian immigrant living in Montreal. He takes up a substitute position in a school after the French teacher commits suicide in a classroom. Understandably, the students are shaken, and Monsieur Lazhar has his own tragedies to deal with, but they work together to form a tight relationship.

(Note: Beware of French Canadian dubs of English-language movies and cartoons. While the voice actors don’t speak in a Parisian French sort of way, they also don’t put on their full Quebec accent. Watching dubbed media can give you a false impression of how québécois actually sounds!)

If you’re planning a trip to Quebec, you’ve got to swear like a real Québécois.

As mentioned above, Catholicism has been well-rooted in French Canadian culture for a very long time. While today’s culture is more secular, that kind of religious fervor still sticks around in odd ways.

In Quebec, this is evident in their profanity. For one, swear words are called sacres, which comes from sacrer (to consecrate).

And here you can watch a Québécoise herself explain how to use some! Beware: these words are quite vulgar, so don’t start shouting them as soon as you land in Quebec.

Again, a lot of French learners don’t realize that there’s a whole world of francophone television outside of France.

Quebec has some wonderful top-quality shows, so start watching! On YouTube, you can watch plenty of episodes of “Tout le monde en parle” (“Everyone’s Talking About It”), a high-energy talk show with plenty of francophone celebrities of all types.

Some episodes are more serious, such as one about immigration in Canada and whether Muslims from Middle Eastern countries should or should not assimilate.

Other episodes are absurdly funny, like the one in which the hosts interview Belgian superstar Stromae. That interview contains jokes about the Belgian French numbering system vs. that of the remainder of the French-speaking world—Belgians say septante (seventy), octante (eighty), etc., instead of soixante-dix (seventy), quatre-vingt (eighty)—as well as a self-deprecating joke about the emptiness of Quebec.

This show includes plenty of arguing, interruption and people talking over one another. Sure, it’ll be hard to understand at first, but keep at it, and it’ll all clear up!

As for TV series, I recommend “Unite 9” (“Unit 9”), a French Canadian take on women’s prison dramas. Don’t think this is just a knock-off of “Orange Is the New Black.” This show has its own involved storyline, memorable characters and far less nudity!

So, you’ve been diligently watching sacre-laden films and TV shows, and you got tired of the slurred speech and complicated dialogue? Relax with some news from Radio-Canada. This is Canada’s French-language radio and television network, and it’s of consistently wonderful quality.

If one thing jump-kicked my québécois into action, it would be this. The language is more formal, so while most of the hosts and contributors speak in French Canadian accents, it’s much, much easier to understand than film and television. News is repetitive, so you’ll have plenty of chances to get it right.

Furthermore, Radio-Canada isn’t just a news station—they have a variety of great programs. I personally like “Plus on est de fous, plus on lit!” (“The More Crazies There Are, The More We Read,” a pun on the proverb plus on est de fous, plus on rit, which roughly translates to “the more the merrier”), a show where the hosts interview authors on their recent releases. As a plus, you can get great book recommendations!

If you live in Canada (or have a way to hack your computer into thinking it lives in Canada), then you can also watch the Radio-Canada TV station on their website.

Now you no longer have an excuse for not understanding the rich language of Quebec. If you’re learning French, always remember that there are numerous French-speaking countries, each with its own unique culture and manner of speaking.

So dive into a new culture and rejuvenate your learning!

Rachel Awan is a writer, tutor, and language learner. She speaks English, French, Spanish, and Italian, and she is currently learning Dutch. Rachel blogs about her own adventures in language acquisition at bookboundpolyglot.wordpress.com .