It’s that time of year: with every falling leaf your summer vocabulary is becoming obsolete!

Sure, we all want to cling to sunny summer days, but there are plenty of things to love about autumn.

Take on the changing seasons by learning this French autumn vocabulary that’s as colorful as the changing foliage.

Still dreading that cold weather? Trying looking on the bright side. As French author, Albert Camus said, “L’automne est un deuxième ressort où chaque feuille est une fleur,” which translates to mean “Autumn is a second spring where every leaf is a flower.”

France’s autumn is as beautiful as its language. While you’re reading literature, listening to podcasts, learning French on YouTube, or engaged in any other fun French language learning methods, you’ll start to notice all kinds of references to autumn in France. There are important national holidays, cultural events and traditions to observe – not to mention lovely landscapes and city views.

Don’t live in fear of the cold. Turn over a new leaf this season with these ten words and phrases to get you in the autumnal mood.

It goes without saying that the most relevant piece of vocabulary in a blog of this title is the subject itself. Luckily, this word isn’t a false friend – it looks exactly like our own English word. We can thank the French for that, seeing as we stole the word autumn from them a long time ago!

It is no secret that the French ADORE their holidays. If you are planning to apply for jobs, visit your usual dentist or even make contact with the government during the month of August, chances are you will be waiting a long time – at least until the first days of September. The country as a whole, unless in the tourism industry, typically takes this time to enjoy summer. Children finish school, professionals go on their breaks and businesses adopt rather lazy opening and closing hours – or they don’t open at all.

“À la rentrée” is a common French phrase used to describe the beginning of autumn when life in France returns to normal. More specifically, it refers to the “back to school” period. It is used as a time reference in this manner:

“When will you move house?” “At the beginning of September/Autumn.”

The phrase can also be used as a valediction at the beginning of summer similar to saying, “Bon voyage!”.

“Have a good holiday!” “Thanks, see you in autumn!”

Like many countries, France embraces daylight savings time. The third of October marks le passage à l’heure d’hiver translated as changing to “winter time,” when everyone turns their clocks back one hour in anticipation of the winter period. Conversely, there is a corresponding date in Spring named le passage à l’heure d’été when the clocks are wound forward one hour. Unlike the English language, which typically distinguishes between these two time differences as either “daylight savings time” or “normal time,”  the French language has some more romantic ways to refer to the seasons:

“Don’t forget that we’re turning the clocks back (changing to ‘normal time’) this weekend!”

“When do we turn the clocks back?” “The third weekend in October.” 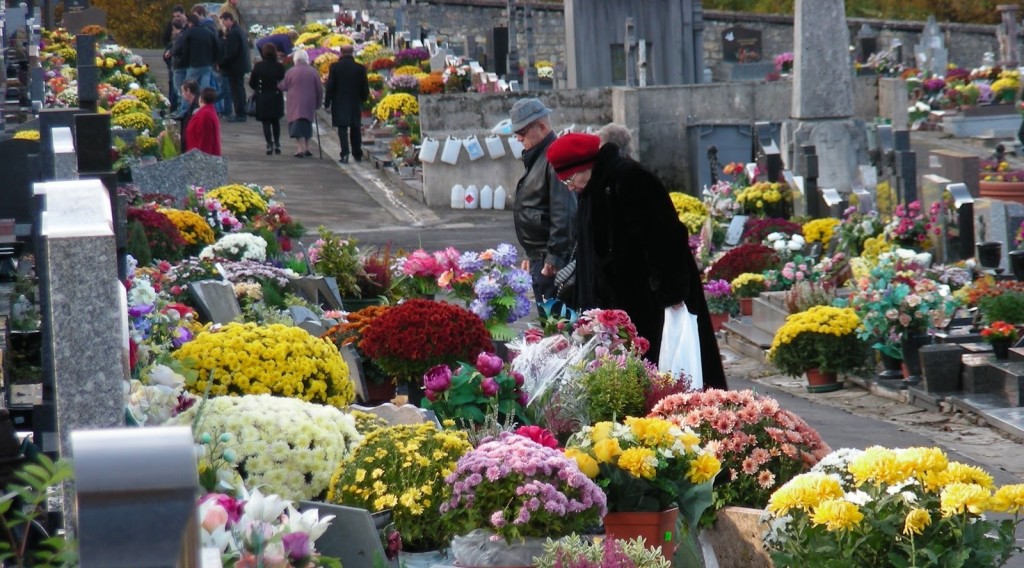 Although more relevant for French Catholics, La Toussaint is a public holiday on the first of November that is now widely acknowledged by the nation as a whole. Most businesses and schools close in order for families to honor their dead relatives either by attending mass or visiting graves with a bouquet of chrysanthemums – the traditional Toussaint flower. The bloom is so synonymous with the holiday that most French people won’t buy them as a gift and reserve them for times of grieving.

The word “La Toussaint” itself is a contraction of “Tous les saints,” meaning “all the saints” or, more commonly, “All Saints’ Day.” Often, the weather at this time of the year is illustrated by the expression, “faire un temps de Toussaint,” which refers to having the cold, grey or miserable weather typical of November. Throughout all the seasons of the year, this phrase can be used to describe similarly icky weather.

“How is the weather?” “It is miserable.” 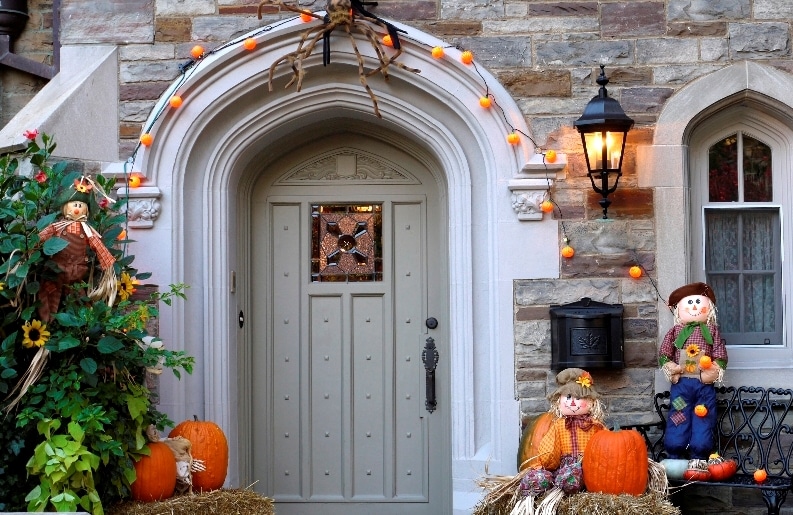 Of course immediately preceding All Saint’s Day is an occasion a little closer to home – Halloween. Arriving in France in the 80’s, Halloween originally was reserved for English speaking communities. It wasn’t until more recent years that the holiday really took off, being pegged as the third most celebrated event after Christmas and New Year. Like America and other parts of the English speaking world, young French people would attend scary parties adorned in pale-faced corn syrup makeup. One difference is that they usually left the more risqué superhero or policewoman costumes for the U.S.A. or their neighbors across the channel. Shops and bakeries would also participate by decorating their windows or products to follow the creepy themes.

These days, however, the evening is losing its following as contentions are raised about the validity of such celebrations in France particularly when it could detract from the more solemn tone of La Toussaint. Still, young children can be seen decked out in ghostly gear saying”un bonbon ou un coup de bâton” or “trick or treat.”

“What are you dressing up as for Halloween?” “I’m going to dress up as a vampire!”

Note: As “trick-or-treat” is a relatively new concept in France, there are a variety of ways to say it depending on geography, slang and culture.

One gorgeous reason to love France in the autumn is the wine! “La vendange” is the holy process of grape picking. For those more savvy on vineyard lingo, this is called “the vintage.” Typically between September and October each year thousands of grapes are harvested and processed into a wonderful national stereotype. The event brings about celebratory festivals, well-stocked flea markets and, of course, herds of foreigners wanting to chip in on the trade.

“Les vendanges” refers to the grape picking period as whole.

“When is the grape harvest (season)?” “Between September and October”

Whereas “la vendange” is a particular grape harvest.

“What are you doing?” “I am picking grapes.”

Naturally we couldn’t forget the poster boy for autumn, l’arbre. Like most countries in the northern hemisphere, France sees a magical change from greens to golds during the months of September to November. Trees take on striking shades of jaune, rouge, orange and brun or, in our case, yellows, reds, oranges and browns.

Les arbres may take most of the glory, but really it is the leaves that do all the work during this transitional phase. Why else would iconic French composer Joseph Kosma write his idyllic piece, Les Feuilles Mortes? Make sure you have a listen, at least to the English translation known as Autumn Leaves. 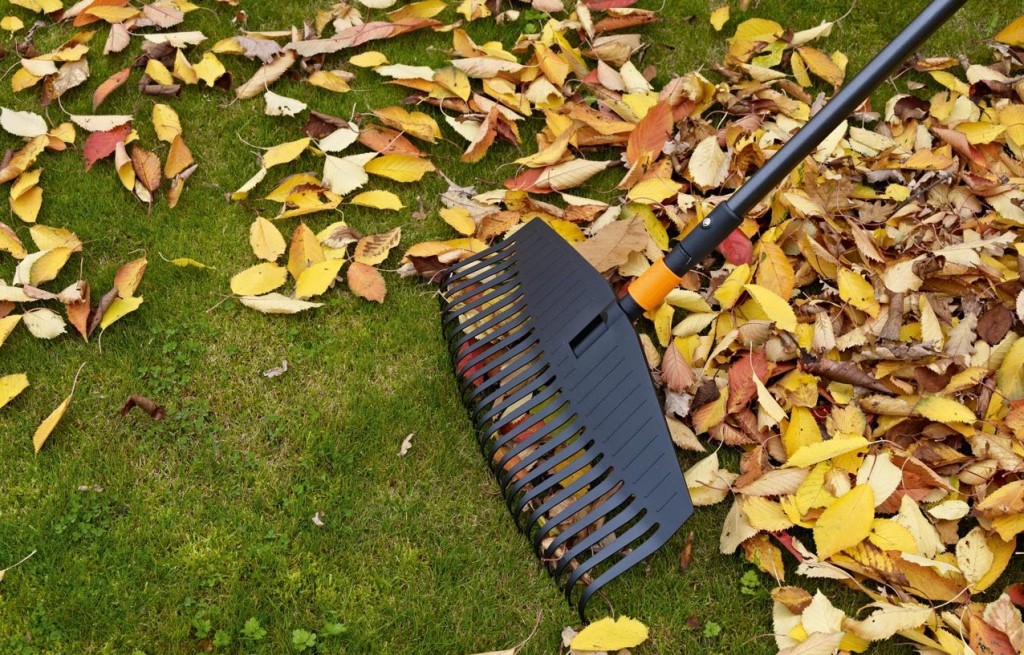 Like the rest of autumn’s seasonal gang, fall is not without its quintessential chores. When the leaves start to fall there is nothing like a trusty râteau to arm you against the rustic onslaught of cascading foliage.

Despite its visual beauty, autumn is often a season we are reluctant to embrace. The cooler temperatures might feel refreshing after the summer heat, but they can’t help but remind us that winter is on the way. Although the weather might fluctuate between bitter and sweet, there’s no reason why you shouldn’t enjoy the more pleasantly cool days.

“Frais” can also be used to say “fresh” and is not to be confused with the English slang word “cool” which means “up-to-date” in the hippest sense. In this instance, you would be better off saying something to the effect of “chouette,” which translates literally as “owl” but means “cool” in modern French slang.

Hopefully this vocabulary has reminded you of the many things there are to love about autumn. France will open up a whole new world of autumnal beauty to you, and reading French quotes and literature will paint autumn in a far more romantic light. Hey, even the parts you don’t like about the season – such as gloomy weather and leafless trees – can be celebrated in stylishly somber French fashion. What’s not to love?