The weather’s getting colder.

This can mean one thing and one thing only: Christmas is coming!

You might be wondering how you can incorporate learning French into the holiday season.

After all, Christmas is a cherished holiday in the French-speaking world.

From mid-November onwards, you can expect to see lights being hung, trees being put up and presents being wrapped.

But what else does Christmas entail in France?

You’re about to find out, and learn some handy vocabulary while you’re at it.

Eggnog at the ready—things are about to get really festive!

We’ve all got our own beloved family traditions when it comes to Christmas, and in France, it’s not so different. The running of events, however, does tend to happen in a slightly different order, and in many French households, it’s all about Christmas Eve.

While traditionally, the family would attend a midnight mass service on Christmas Eve, many families now partake only in the huge feast that would follow the event, which can contain up to 5 or 6 courses!

Each region in France has its own traditions that are undertaken on Christmas Eve.

Before going to bed, you might put out your stocking for Santa Claus to fill with gifts during the night, but tradition in France may call for something a little different. In many places, French children put out a pair of shoes on Christmas Eve in the hopes that Père Noël (Santa Claus) will visit in the night to stuff them with gifts.

While the more popular tradition of hanging stockings has since taken over, some regions still follow the shoes tradition.

When it comes to feasting, the French really know what they’re doing! Unlike the Christmas Day meal you might be used to, many French households have their big meal the night before, on Christmas Eve.

Called le réveillon (late evening holiday meal), the feast is packed with some of the most incredible culinary delights seen in France. Large families tend to gather, so many courses are served over the meal. While each region has its own traditional food, many people serve goose, stuffed turkeys, chicken or oysters.

When it comes to dessert, however, many French families look to the same place for inspiration. La bûche de Noël (Yule log) is a well-loved Christmas dish and includes chocolate and chestnuts presented within a log-shaped cake.

Making a bûche de Noël is something that you can do at any time of year and, thanks to the Internet, there is a ton of easy and accessible recipes available! 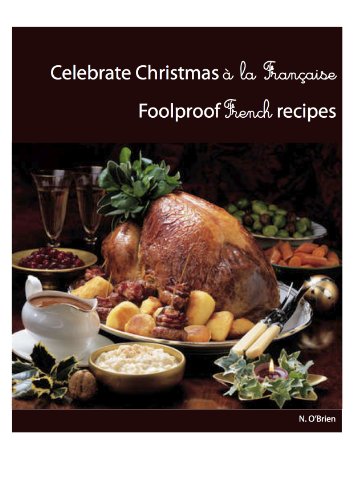 Other areas have their own traditions, too, and if you’re lucky enough to be in Provence, you can expect to sample up to 13 desserts (celebrating Christ and his 12 disciples).

If you want to try your hand at Christmas French cooking, you’re very well covered! Books like “Celebrate Christmas à la Française” or the culinary classic “Mastering the Art of French Cooking” are packed with traditional recipes that many French people still use today.

Of course, it’s not all about the food, and over the course of the meal, a French family might give out a gift or two.

While just like in English-speaking countries, customs do vary, it’s not unusual for children to receive gifts from extended family during the meal, saving their larger gifts from Père Noël for the day after. After all, he hasn’t visited yet!

In certain areas, however, gift giving might be a little different. More religious families in France, who celebrate la fête de Saint Nicolas (the holiday of Saint Nicholas) on the 6th of December, will give out their Christmas gifts on this day, rather than the 25th, which is instead marked with religious ceremonies and meals with the wider family.

Celebrating the Christmas season in France is not just something done on the 24th and 25th of December. You can find many festive activities going on in towns and cities across the country all throughout the month and even before.

In Roman Catholic French families, the Christmas season begins much earlier in the month, with celebrations kicking off on the 6th of December.

On the 8th of December, people in Lyon light up their windows with candles to celebrate the Fête des Lumières (Festival of Lights), commemorating the Virgin Mary.

Perhaps one of the best-loved Christmas events is the Christmas market. Normally appearing in late November and running until just before the day itself, French Christmas markets are packed to bursting with local foods and drinks, crafts and artisanal gifts.

The market held in Strasbourg, with its impressive local architecture showing off festive light displays, is renowned around the world.

While midnight mass ceremonies are attended by fewer and fewer people each year, there are a number of places across France in which you can attend carol services on Christmas Eve. One of the most well-attended is probably that of the Notre Dame in Paris. Pulling in tourists from across the world, the service starts late at night, and is a great way to get into the festive spirit!

Dreaming of a White Noël: Key Vocabulary for French-ifying Your Christmas

While Christmas is one of the biggest public and religious holidays of the year in France, most families do not send Christmas cards to their nearest and dearest. Decorating the house, wishing people good tidings and indulging in festive food are all part and parcel of the event, but sending a card is something that is much more likely to happen over the New Year.

Typically, people will send out cards and postcards starting just before the New Year rolls around, right up until the end of January. Inside the card, people tend to include a specific wish for the year to come, rather than simply a happy holiday greeting.

Save the Date: Days, Events and Traditions

The time between the 24th of December and the 6th of January is packed full of celebrations in France, and if you’re in a French-speaking country with a large Christian population during this time, you can probably expect an invitation or two to a holiday party.

The last day of Christmas, Epiphany, is also celebrated in France. The day when the Three Wise Men arrived in Bethlehem after being guided by the star, it’s very important for religious families and is marked accordingly.

In the lead-up to this day, families will move their wise men figurines closer and closer to Jesus on their nativity scenes. When Epiphany finally comes around, the Wise Men are moved into the stable.

Many French families also choose to mark the day by ending their evening meal with a galette des rois (Kings’ Cake).

A pastry cake stuffed with frangipane, the galette des rois has a small figurine hidden inside that must be found. Traditionally, the youngest member of the household will hide under the dinner table and select who is going to receive each slice of the cake as it is cut into pieces.

Whoever finds the figurine in their cake gets to wear a paper crown and act as King or Queen for the night. If the family members don’t obey their every command, there will be trouble!

Christmas songs are just as popular in France as they are elsewhere in the world, and in many cases, popular English Christmas carols have been translated into the French language!

“Vive le vent” (“Jingle Bells”) has exactly the same tune as the English version, and is a great way of brushing up on your language skills. Even “White Christmas” (“Noël Blanc”) has received the French language treatment!

If you want to sing a few songs in French and even learn a new tune, there are a ton of great opportunities to do so out there:

Under the Tree: Gifts and Giving

Giving and receiving presents is one of the major parts of the Christmas season in France. While giving gifts to family members and close friends is fairly straightforward, there can be slightly different rules if you want to present something to someone who is not in your immediate circle.

If you want to give your teacher, postman or concierge a gift in France, you will normally buy them an étrenne. Les étrennes (New Year’s gifts) are small tokens of appreciation and are typically given out to private and public workers and small children. Gifts can be anything from bunches of flowers, to small boxes of chocolates, to thoughtful, hand-written notes of appreciation.

Deck the Halls: Celebrating in Style!

The time-honored tradition of putting up Christmas lights and decorations is as popular in France as it is in other celebrating countries around the world. Across many regions of the French-speaking world, you can expect to see some spectacular displays on show. Where home decorations fare, there are many ways in which French families will deck out their houses and there are certainly a lot of options out there!

While you might expect to find a Christmas wreath hung on the door of a house, French families might be more inclined to finish their table spreads off with a wreath that is decorated with four candles. Four Sundays before Christmas day, one of the candles will be lit, and after each week that passes, another one is lit, marking the arrival of the festive day.

The traditional Christmas tree is, like in most other countries, a fresh pine tree decked out in festively-colored trinkets. In French towns and cities, you can expect to see large Christmas trees that have been covered head to toe in twinkling lights. In major Parisian department store Galeries Lafayette, there is even a mammoth tree suspended from the ceiling!

If you’re lucky enough to celebrate the Christmas season in France, then you will see just how much the French people love the holiday.

From festive markets to family feasts and intricate decorations, the country is a magical place during the colder months, and no matter where you are, there’s always something worth celebrating.

If you’re staying at home, however, you can still practice French during the holiday season and incorporate some Francophile traditions into your own celebrations.

After all, what’s learning French all about?