Our Guide to the Order of Adjectives in English, Based on Adjective Type (with Examples)

The order of adjectives in English is a particularly tricky one for language learners.

In fact, native English speakers have a hard time explaining it because it’s so instinctive for them!

But once you memorize the rules, it’s easy to apply them to any sentence you want to create.

In this post, we’ll show you the 10 types of adjectives to put any English adjective in its place.

The Simple Order of Adjectives in English

The position of an adjective depends on what type of adjective it is.

All of these factors will influence the adjective’s position.

In this article, we’ll discuss each type of English adjective in the order it appears in a sentence. We’ll also provide examples.

Simply put, this is the order of adjectives in English that you can refer back to:

Let’s take a close look at those categories.

10 Types of English Adjectives in Order

The adjective order below is a slightly flexible rule—be aware that there are some exceptions and there can be slight variations between the different types of English (such as American, British and Australian).

If in doubt, place the more general adjectives first, followed by the adjectives that provide more specific detail about the nouns.

Adjectives describing the quantity of the noun come first. These include numbers:

Quantity can also be expressed through adjectives such as:

If you’re only referring to one object, person or place with the noun, you can simply use these articles:

These adjectives communicate how the noun is viewed by yourself or others. These are subjective terms:

Adjectives describing the size of the noun are placed next. This word tells the reader or listener how big or small the noun is. A variety of words can be used to explain this, including:

One exception here that you may notice is the word “big,” which often comes before an opinion/value word. For example, “the big bad wolf” is a character in the story “The Three Little Pigs.”

The adjectives placed next in line give information about the temperature, if necessary:

Age doesn’t have to be a number. Age can also be communicated with words that explain the time period or era the noun was created in or lived in. Adjectives used here could be:

Next in line are the adjectives that describe the shape. Some of the words you could use to communicate the shape the noun looks like could be:

Adjectives describing color are positioned next:

These words can also be used when describing the coloring of a person’s hair or an animal’s fur:

Adjectives that describe where the noun came from tell the reader or listener about its origin. These adjectives could include:

These adjectives simply indicate what the noun is made of. Adjectives here could be:

The last adjective before the noun describes its purpose. This explains what the noun is used for:

How to Choose English Adjectives Wisely

I know what you’re thinking.

Instead, focus on learning the position of each type so that when you do need one, you know exactly where to put it.

Look at this example:

Not all of these adjectives are relevant. We know that swimming pools are made of water and they’re blue.

On the other hand, chairs can be made from a variety of materials and could be any color.

Using an adjective that describes the type of material the chair is made from is giving the listener or reader information they don’t already have. This information is relevant. It’s needed to create a more detailed picture in their mind.

As a general rule, try to focus on only two, three or four adjectives that’ll add the most description to your sentence. Once you’ve selected these few adjectives, simply place them in the order stated above.

For a bit more guidance on the subject, it also helps to take a closer look at how native English speakers order their adjectives.

Read modern books and listen intently to movies, TV shows and other English language media, then try using descriptive phrases that you come across.

On the FluentU program, you can see how native speakers naturally use multiple adjectives in real movie trailers, interviews and other quick clips: 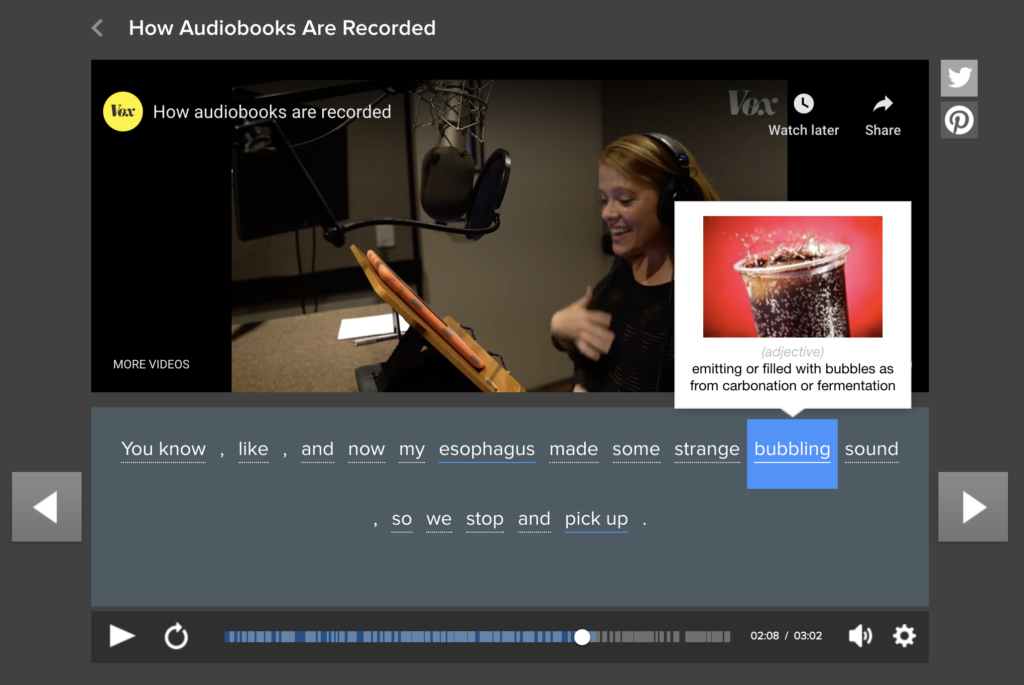 They come with interactive subtitles that let you instantly check definitions of any words while watching, and you can practice those new terms in the post-video quizzes.

You can also save new adjectives as custom flashcards and review them later.

When to Use Commas Between Adjectives

These are all opinion/value adjectives, so they need commas and they could be rearranged:

The best way to learn is to give it a go!

Challenge yourself and above all, have fun creating interesting sentences!