18 Quirky Idioms from Diverse Languages Around the World

Idioms can leave you questioning why you spent so much time trying to understand a new language at all.

Every language has them. Even languages closely related to your native language might have idioms that leave you feeling like you didn’t get the memo the first time you hear them.

That said, some idioms really take the cake—and guessing what they mean isn’t easy as pie. Here are 18 unusual idioms from around the world.

Next time someone is annoying you, just tell them to stop ironing your head!

This idiom is so useful that it actually appears in other languages as well—for example, the Turkish Kafa ütüleme means “Don’t iron my head!”

2. Are you still riding the goat? 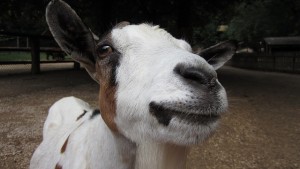 Cheyenne is a fascinating language that’s now highly endangered, with only a couple thousand living speakers, mostly on the Northern Cheyenne Indian Reservation.

It’s also the source of a rather catchy way of asking someone whether they’re separated from their spouse, Mónésó’táhoenôtse kosa?—literally, “Are you still riding the goat?”

3. Walk around in hot porridge

I won’t walk around in hot porridge, I’ll tell you right away: Chodit kolem horké kaše is the Czech equivalent of “beat around the bush.”

As if the phrase “walk around in hot porridge” wasn’t already perplexing enough, the Finnish and Norwegians have also brought cats into the picture, using “pace around hot porridge like a cat” to mean the same thing (kiertää kuin kissa kuumaa puuroa in Finnish, å gå som katta rundt den varme grauten in Norwegian).

The Chinese 七窍生烟 (qīqiàoshēngyān) “to emit smoke from seven orifices” means to be extremely angry. You might be wondering exactly what the orifices in question are, so just to clear things up: eyes, ears, nostrils and mouth.

If you prefer your fiery anger-related idioms in Hindi, you can also go for अंगारे उगलना (angaare ugalana)—to excrete embers.

5. Have other cats to whip

The French J’ai d’autres chats à fouetter! is analogous to English’s “I have other fish to fry!” but literally talks about whipping cats instead.

Between this idiom and “pace around hot porridge like a cat,” you might be sensing that a disproportionate number of idioms include cats.

This feline fixation holds for English too—let the cat out of the bag, curiosity killed the cat, etc. Apparently people figured out long before the Internet that cats just make everything better.

6. God bless you and may your mustache grow like brushwood

In English, we sometimes say that to be feeling down is to “have the blues.” The expression in French is pretty much the same except, well, you replace “blues” with “cockroach”—avoir le cafard.

You might think it doesn’t sound very appealing to live like a maggot in bacon, but you’ll think again when I tell you the German Leben wie die Made im Speck refers to living luxuriously.

Just think how happy and well-fed that little maggot must be surrounded by delicious bacon!

You mean, just when science has finally proven that cow-tipping is mathematically impossible, now we have to deal with cow inflation?!

No, not so fast! To describe someone as “inflating a cow” in Chinese, 吹牛 (chuīniú) is simply a way of saying they’re bragging or talking something up to be bigger than it actually is.

Instinctively, you probably understand that you don’t want anyone hanging noodles on your ears. Indeed, to hang noodles on someone’s ears in Russian, Вешать лапшу на уши (veshat’ lapshu na ushi), is to fool them or BS them.

11. Dumplings instead of flowers

The Japanese 花より団子 (hana yori dango), translating literally as “dumplings instead of flowers,” refers to choosing something useful over something pretty and decorative.

It’s equivalent to English’s comparatively unimaginative “function over form” and “substance over style.”

12. You can’t pluck feathers off a bald chicken

13. Ride an elephant to catch a grasshopper

If you’ve been reading the FluentU blog for a while, you might know a thing or two about an elephant named Butterfly. But you probably haven’t heard about riding an elephant to catch a grasshopper.

The Thai ขี่ช้างจับตั๊กแตน(K̄hī̀cĥāngcạbtạ́ktæn) refers to putting in a lot of work and getting little in return.

14. As clear as dumpling broth

It turns out something is klar wie Kloßbrühe in German if it’s absolutely clear—that is, easy to understand. Now, you might argue that dumpling broth isn’t actually clear, and you’d be correct.

Somewhere along the way, this idiom switched from meaning “not at all clear” to “totally clear,” sort of like if “clear as mud” had come to be synonymous with “crystal clear” in English.

You might not be surprised to hear that a plate of sauerkraut isn’t the ideal locale for riding a bicycle. Accordingly, the French pédaler dans la choucroute means to get absolutely nowhere.

And if you’re thinking “man, that’s such a cool idiom, I wish there were more idioms like that,” you’re in luck!

16. A germ across the sea can be seen, an elephant on the eyelid can’t

Essentially, it means that it’s easy to see other people’s mistakes no matter how small they are, but it’s hard to see your own even when they’re very large.

17. Get stuffed with hay

The Polish wypchać się sianem is, in literal terms, an instruction to “get stuffed with hay.” Needless to say, this isn’t an expression you’d direct at someone towards whom you feel fondly.

The dog may be man’s best friend, but at least in Italy, that friendship does not extend to places of worship. The Italian un cane in chiesa refers to an unwanted guest.

For more colorful idioms, you can purchase Adam Jacot De Boinod’s “I Never Knew There Was a Word for It” (which also covers interesting words from different languages) or dive into some authentic native content and perhaps even a virtual immersion program, like FluentU, for example.

Authentic videos and other media are a great way to expose yourself to idioms as they’re used in context.

You’ll be glad you did—in fact, you’ll be like a kid in a candy store, or as they say in Norway, you’ll be in the middle of the butter melting in the porridge!