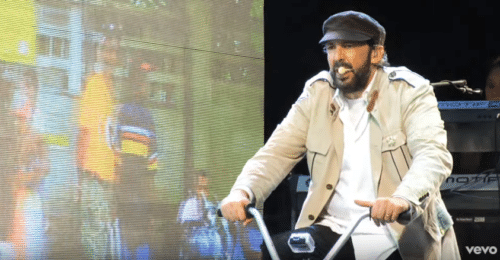 A Crash Course to Learning Spanish with Songs

Spanish songs are among the most beautiful tunes on the planet.

Their beauty is due to the crackling energy of the music and the romance of the lyrics, which form a powerful combination that will inspire you.

Using music to learn the language is especially fun because you get to really connect with the Spanish language, gaining insight into the things that native Spanish speakers are passionate about.

Not to mention, the Spanish language boasts some of the most incredible dance music! There is nothing better than a catchy, foot-tapping song to cement a language lesson in your mind.

Here are some reasons why you should learn while you sing.

Learning Spanish with songs bolsters your command of the language. You will quickly notice an uptick in your overall comprehension, fluency and accuracy of pronunciation. We have compiled some songs here to help you understand the language better, opting for a combination of upbeat and sentimental songs.

So you will still have fun and want to dance, but you will also feel these songs emotionally.

We believe that if you are able to respond to the music from a true place of emotion, you will be more motivated to learn the words behind the music. Just look to psychoacoustics—the science of human response to sound and music—to show you the proof. Music strikes us to our very core. Beautiful music goes to our hearts and souls.

So, due to the beauty of Spanish music, you should look beyond the vocabulary and grammar and really try to feel the music. Connect the sounds you are listening to with the emotion the music is trying to evoke. Naturally, musicians are artists who connect emotions, sounds and words, so they all go hand-in-hand. Having this connection between Spanish words, beautiful sounds and emotions makes for powerful learning.

Spanish is a Romance language that contains a number of words, sounds and grammatical rules that differ from English. From verb conjugation to the rolling of your Rs, there is arguably a more lyrical, delicate nature to the way the Spanish language is spoken, and music will help you get there in an easier manner.

You will feel utterly romantic singing in this language! This will keep you more motivated to keep studying—I mean, singing.

Spanish may be especially lyrical, but singing songs in any foreign language is often easier than speaking the language, simply due to the fact that we can follow along with the music and sing the words that are being sung. Reading can be mentally stimulating as well, but combining reading with singing makes it easier for you to remember the words and phrases being uttered in each sonic composition.

After you learn the words, learn what the key parts of each song are trying to tell you by learning the definitions of the words. Over time, these words will come naturally to you—learning these definitions while you sing the lyrics will help you add images and meanings to sounds. As you hear a certain part of a song, you can capture what is being sung with mental pictures that illustrate these definitions.

Whether it be the savory nature of the paella in Spain, the rhythmic dance with Afro-Caribbean beats known as merengue or Argentina’s unbridled passion for fútbol, there is plenty of culture attached to the Spanish language that will help you develop a deeper understanding of other countries.

The learning process is supposed to be fun, and learning how people in each country use art to express their patriotism and culture may teach you a thing or two about life that you do not know yet.

Here we have gone in depth with three songs that will add some beauty, romance and culture to your life, simultaneously teaching you the Spanish language and the way people from other cultures enjoy life.

Here are three songs for you to enjoy! We hope this will give you a taste of just how many Spanish language lessons you can draw from every song you hear.

Maná is a Mexican band that often sings about the woes of life. “Clavado en un Bar” translates to “Nailed to a Bar,” and the song evokes the frustrations of day to day life in the form of Latin rock and roll.

The theme of love and loss is prevalent in this song, which begins with the phrase:

Aquí me tienen bien clavado, (Here they have me nailed,)

The bittersweet lyrics evoked in the first part of the song sees the singer soltando las penas (letting his sorrows go) as he is brindando por su amor (toasting for her love).

Anyone who has gotten their heart broken can relate to the idea of trying to let go of the pain that love can bring, while simultaneously remembering the love that once was.

¿Dónde estás, bendita? (Where are you, blessed woman?)

¿Dónde te has metido? (Where have you hidden?)

ven y sacame de éste bar. (come and take me out of this bar.)

The chorus begins with the singer calling his love bendita, which can work as an adjective that means holy, or a female person who is holy.

“¿Dónde te has metido?” literally translates to “where have you entered,” but metido means hiding in this context as the woman is away in a hole somewhere, unwilling to reconcile with the singer.

Quiero ser tu todo (I want to be your everything)

y tu corazón. (and your heart.)

Ven a rescatarme, amor, (Come and rescue me love,)

The final part of the song gets quite sentimental with the singer asking his love: Déjate, which means “let yourself be” as it comes from the verb dejar, which means “to leave” or “to let.”

Querer means “to want” or “to love,” as evidenced in the next line, which reads quiero ser, translating to “I want to be.”

Rescatarme is a combination of rescatar (to rescue) and a mí (me). Ser means “to be,” while sol and mar mean “sun” and “sea” respectively.

This Maná song can help you understand some verbs surrounding love, loss and the need to be with someone. Additionally, it offers some insight into how you refer to different elements of nature, including the sun and the sea. It never hurts to brush up on some of these words.

Juán Luis Guerra is an icon of Dominican culture, singing about the best and worst aspects of the Caribbean nation’s culture, including a song in which he hopes it rains coffee.

This song is called “El Niágara en Bicicleta,“ and it examines how hard it is to get proper health care in Dominican hospitals. The title (“Niagara Falls on Bicycle”) uses an example of something that is difficult to do in order to demonstrate how difficult it is to receive adequate medical attention.

y me agarré la cabeza (and I grabbed my head)

This song highlights some of the problems in the country, including the lack of luz, which means “light,” but it also refers to the electricity or power problems that the nation always has. Guerra adds a poetic touch to his lyrics in the form of having ojos (eyes) opened as wide as a luna llena (full moon).

The chorus is very tongue-in-cheek, mentioning how the medicos (doctors) se fueron (left), which is a criticism on the lack of responsibility from Dominican workers.

The next part notes that there is no anesthesia to help treat patients, while the last part mentions that “el alcohol se lo bebieron” (they drank the alcohol), which is referring to rubbing alcohol while criticizing the country’s party culture.

The song finishes with the line “el suero ya se usó para endulzar el café,” which translates to “the IV was already used to sweeten the coffee.” Dominicans of all professions and economic statuses drink coffee before going to work.

If you are ever in a Spanish hospital, some of the words in this Juán Luis Guerra could be useful. Additionally, the song allows you to understand how to say the names of some popular beverages and the verbs that go along with them.

Soda Stereo is one of the greatest bands in Latin American history, fusing elements of rock with electronic and pop music.

Singer-songwriter Gustavo Cerati passed away in 2014, but his legacy will influence musicians and poets alike for years to come as many have hailed him as a lyrical genius. “En la Ciudad de la Furia” (In the City of Fury) is a bittersweet ode to Argentina’s capital of Buenos Aires, using literature and mythology to paint a picture of urban life.

Me verás volar (You will see me fly)

donde nadie sabe de mí (where no one knows of me)

y yo soy parte de todos (and I am part of everyone.)

The beginning of the song sees the protagonist volar por la ciudad de la furia (fly through the city of fury) which speaks to his potential in an unforgiving city where only the strong survive. Nadie sabe de mí (no one knows of [or about] me) reminds us of the protagonist’s anonymity.

Me verás caer (You will see me fall)

como un ave de presa. (like a bird of prey.)

Me verás caer (You will see me fall)

Once again, the image of a bird or angel in flight tells the world me verás caer (you will see me fall) in order to illustrate the hardships of urban life. Caer means “to fall,” which is an image that is shown sobre terrazas desiertas (over deserted terraces), once again demonstrating the loneliness of this lifestyle.

Con la luz del sol (With the light of sun)

Solo encuentro (I only find)

en la oscuridad (in the darkness)

lo que me une (what unites me)

Finally, we see the luz del sol (light of sun) making his wings (alas) melt (derretirse), illustrating the flight of Icarus who flew too close to the sun and his wings melted off. The sun then leaves and he solo (only) finds en la oscuridad (in the darkness) lo que me une con la ciudad de la furia (what unites [or binds] me to the city of fury) speaking to the universality of urban life in a third world country.

Soda Stereo is especially poetic, and this song gives you some of the tools necessary to begin working on your own poem. By expanding your vocabulary with words about a metaphorical flight in a tumultuous city, you learn how to talk about the anguish that many Latin Americans feel in their everyday life.

Overall, these three songs all have their own identity designed to help you understand how artists use Spanish.

Whether it be hard-hitting rock music, dance-friendly merengue or deep, reverberating walls of sounds, the sounds in these tunes allow you to immerse yourself in the beauty that makes up multiple cultures.

Once you do this, you can follow along with the lyrics being uttered and fall in love with the love and pain that makes up these singers.