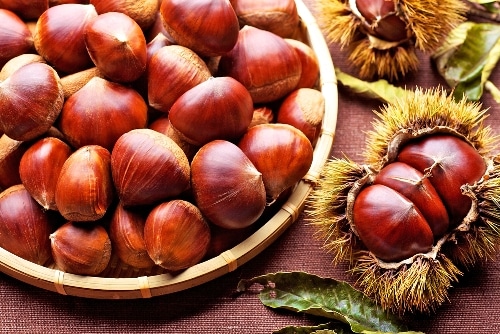 49 Delicious Japanese Food Words That Cater to the Autumn Appetite

If you’re in Japan now, you’ll be seeing advertisements for grilled Pacific saury and autumn editions of beers.

Ah, finally! This signals the arrival of autumn and delicious food.

If you’re reading this and it’s not currently autumn, that’s a darn shame—you’re about to get really nostalgic for those cool, crisp months.

Autumn in Japan generally runs from mid-September to mid-December. It’s a great time to start enjoying food made for colder weather such as soups, hot noodles and heartier dishes.

Stews and other hot dishes are introduced to keep you warm as the temperatures start to dip.

Japanese peoples’ lives revolve around the country’s four distinct seasons. The climate changes, the landscape changes and the food eaten daily changes as the seasons give way to each other.

Each season has its unique foods. The Japanese believe in aligning their diets and eating habits with the season. You’ll find them using lots of seasonal ingredients in their cooking.

Many of the dishes eaten during this period are traditional Japanese favorites that incorporate delicious seasonal fruits and vegetables.

What’s This “Autumn Appetite” You Keep Hearing About?

Autumn is known as the “season of healthy appetites” in Japan. The Japanese even have a phrase for it—食欲の秋 (しょくよくの あき), literally autumn appetite.

In Japan, people say autumn is the perfect season to have a good appetite. Japanese believe that the desire to eat is highest at this time of the year.

Many magazine articles abound about how to control your appetite and keep your weight off in this season as appetites increase.

Why Do Appetites Increase in Autumn?

The Japanese believe that this is due to:

How to Avoid Weight Gain, the Japanese Way

With all that eating, how do you avoid weight gain? Here are some tips from Japanese conventional wisdom:

According to a survey done by Dohouse in 2014, these are the foods that Japanese people associate most with autumn.

Below, we’re going to introduce you to some of the most popular autumn foods in Japan. If you visit Japan in autumn, you can be sure to come across them.

Here’s a hypothetical day as a tourist in Japan in beautiful fall.

49 Delicious Japanese Food Words That Cater to the Autumn Appetite

Whet your appetite for Japanese food words with the immersive experience of FluentU. You can find some of these and many other vocab words in this program That’s because FluentU takes real-world Japanese videos—like music videos, movie trailers, documentaries, news and inspiring talks—and turns them into personalized language learning lessons.

You’ve been out the whole day sightseeing with your Japanese friend and your stomach is growling. You need a snack right now. What are your options?

Your friend informs you that sweet potato is a very popular snack in Japan during autumn. And that it starts making an appearance on street corners and stores around September.

Similar to yams, the outside skin is purplish in color and the inside is more yellow than orange. There are many ways to prepare it, as we’ll see below. 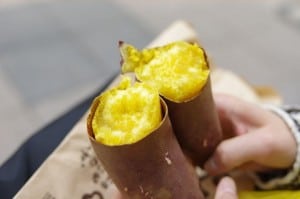 This can be purchased from the store or the 焼き芋屋 (やきいもや), the baked sweet potato man, who drives his truck around residential neighborhoods. 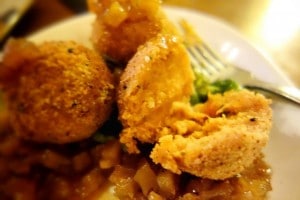 This fried food is a big hit among foreigners and kids. While croquettes are not considered an original Japanese food, the deep-fried delicacy evokes the image of an autumn comfort food for many.

Croquettes are often a homemade snack, but they can also be found in the food aisles of department stores. 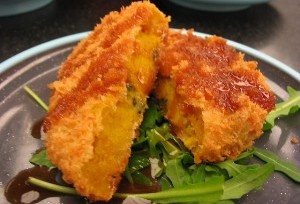 An alternative is the pumpkin croquette, which is a breaded ball of pumpkin pureed.

Pumpkins abound during this period and are a staple in Japanese cuisine. Japanese winter pumpkins are of a slightly sweeter variety and have a rich, butternut-squash-like flavor.

Like the sweet potato, there are many ways to cook it. A popular way is to fry it as a croquette. It’s delicious when combined with the croquette’s hot, crispy breading.

Traditional Japanese croquette is made with potatoes, and is often mixed with ingredients such as ground beef, onions, corn or other vegetables, and curry seasoning.

But the pumpkin croquette is made entirely of Japanese winter pumpkin, and seasoned simply with salt, pepper and caramelized onions. It is breaded in crumbs, then fried.

It can be enjoyed as is or dipped in a sauce. It’s great as finger food, and can be served as a meal with 味噌汁 (みそしる), miso soup, steamed rice and a salad.

It is now dinner time and you start off with the obligatory beer and appetizer to go with it. In Japan, an appetizer or snack served as an accompaniment for (alcoholic) drinks is called 肴 (さかな). 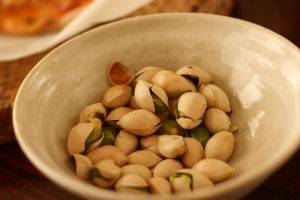 Ginkgo nuts are often eaten as an appetizer and accompaniment to beer or 酒 (さけ), Japanese rice wine.

They are also found as a topping on 茶碗蒸し (ちゃわんむし), a Japanese steamed egg custard containing shrimp and mushrooms.

茶碗蒸し is a popular side dish to the main course of an autumn or winter meal.

The autumn influence is not restricted to food. Brewers, like Sapporo, introduce special versions of their beers, giving them names like “Colors of Japan” or “Good Fortune of Autumn.”

Time to move on to the mains! The waiter recommended these autumn favorites. So many options, so little stomach space, which should you choose? 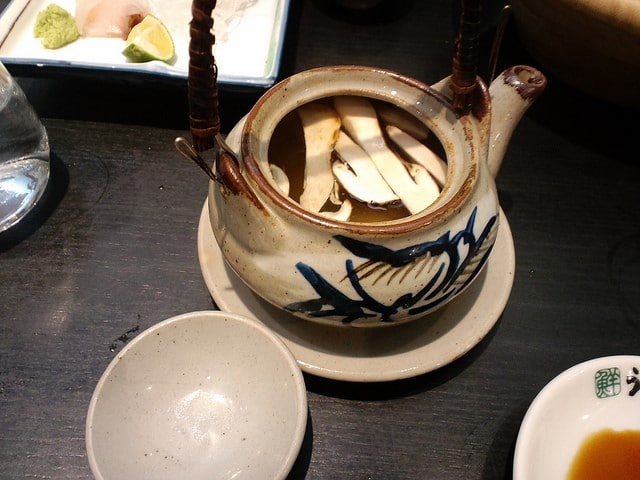 松茸 is an expensive type of pine mushroom known for its unique smoky aroma and flavor.

It is often eaten in a hearty soup dish called 松茸土瓶蒸し (まつたけ どびんむし), matsutake and broth steamed in an earthenware teapot, which consists of a clear broth, seasonal vegetables, slivers of chicken or shrimp, and the star ingredient, 松茸.

The dish is traditionally prepared and served in a clay teapot called a 土瓶 (どびん). You pour out the broth into a small cup or dish and pick out the rest from the teapot with chopsticks.

It can be complimented with a few drops of citrus, such as 柚 (ゆず). This strong soup is the perfect thing to take away the chill of an autumn evening.

While 松茸土瓶蒸し is available in restaurants around Japan, the price range can differ depending on whether domestic or imported mushrooms are used. 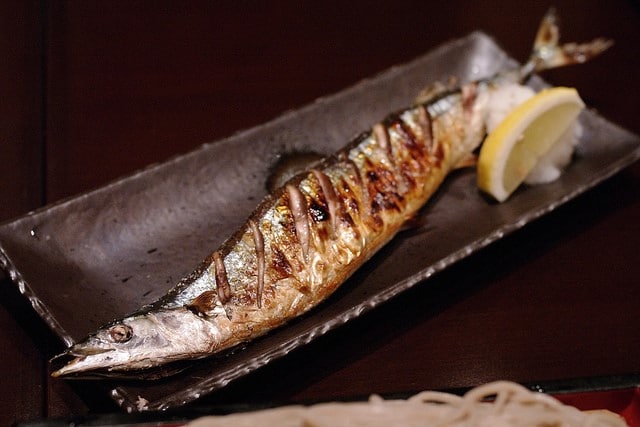 Known as Pacific saury or mackerel pike in the US, the same fish is called 秋刀魚 (さんま) in Japan. 秋刀魚 is composed of three kanji characters and it literally means “autumn sword fish.”

The first character (秋/あき) means autumn, the second (刀/かたな) means sword, and the third (魚/さかな) means fish. 秋刀魚 can be found in abundance off the coast of Japan in autumn.

Autumn is the best time to eat it because that is when it has more fat content—around 20% compared to around 10% during summer.

The sleek, silver fish is best enjoyed grilled with salt, called 秋刀魚の塩焼き (さんまの しおやき), due to its distinctive oiliness and fatty content.

It is lightly seasoned with a pinch of salt and then served in the skin with soy sauce and grated 大根 (だいこん) radish on the side. 秋刀魚の塩焼き is served whole.

You should start eating from the crispy skin, adding a squirt of lime juice, 大根 radishes, or soy sauce to the flesh as a light garnish.

You can then use chopsticks to pick out portions until only the bones are left. Salt-grilled Pacific saury can be enjoyed in traditional pubs with a mild 酒 (さけ). 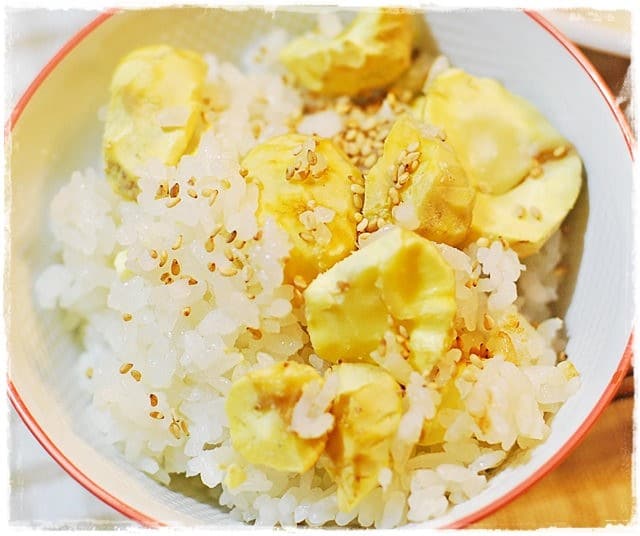 This dish has two components—rice and chestnut.

Rice, Japan’s staple food, is seasonal and the first of the rice crop is harvested in autumn.

The first harvests of rice in autumn, called 新米 (しんまい), new rice, are considered to have a completely different taste than the rice harvested year-round.

It is softer, whiter and shinier than rice harvested more than a year earlier. Japanese will often say that new rice is moister, sweeter, and more aesthetically pleasing.

This is something not to be missed if you’re visiting in autumn.

Chestnuts, known in Japanese as 栗, are harvested in the fall. They can be roasted, peeled and eaten as is for a snack or dessert.

They can also be steamed, boiled or cooked in rice to make 栗ご飯 (くりごはん), rice with chestnuts. This is one of the simplest ways to incorporate this delicious nut in your daily diet.

栗ご飯 is one of the most popular fall dishes in Japan and is a hearty dish with a tiny dose of sweetness.

Besides chestnuts, mushrooms and sweet potatoes are also popular rice toppings. Ginkgo nuts are also considered to be a subtle accompaniment to new rice that doesn’t overpower its flavor.

Burp, time for something sweet! How about a dessert or お菓子 (traditional Japanese confectionery, sweets or candy) to finish the meal? 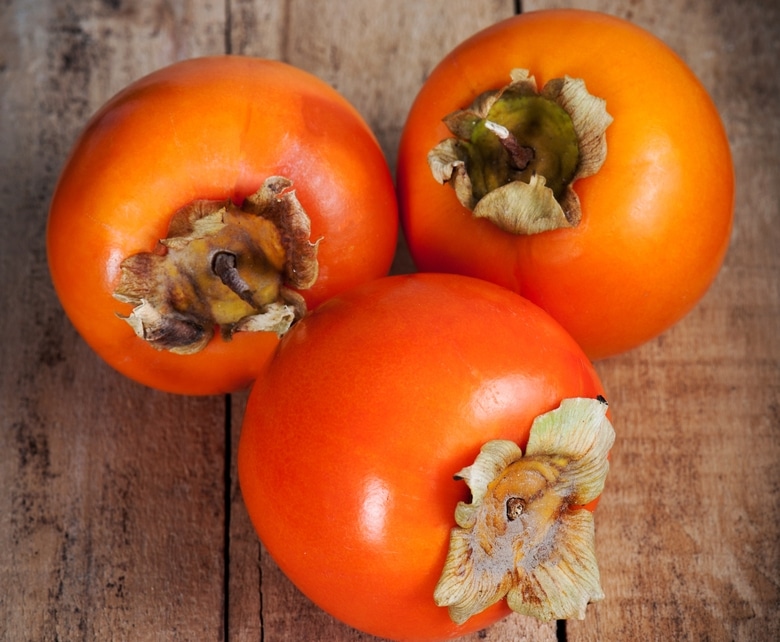 Persimmon is not a fruit you’d find commonly in the US. But in Japan, you’d see dried persimmons hanging from farmhouses everywhere in mid-fall. It has a brown-orange color that symbolizes autumn. 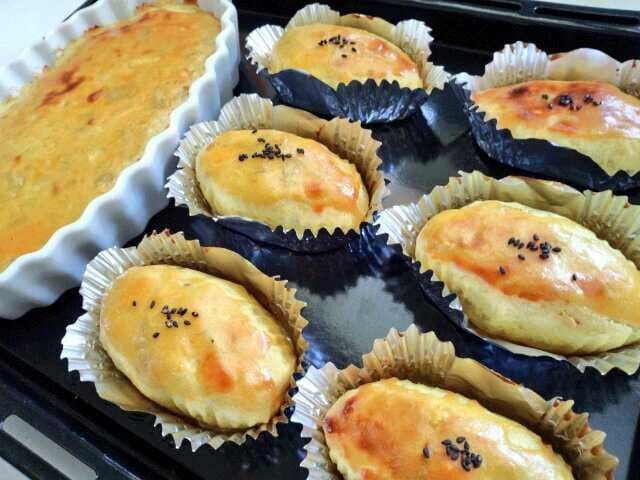 It is made by steaming or boiling sweet potatoes. Then the sweet potatoes are peeled, crushed and mixed with sugar, butter, milk and egg yolk.

The confectionery is coated with egg yolk to give its golden brown color after baking. According to the Dohouse survey, this is Japanese women’s favorite autumn dessert! 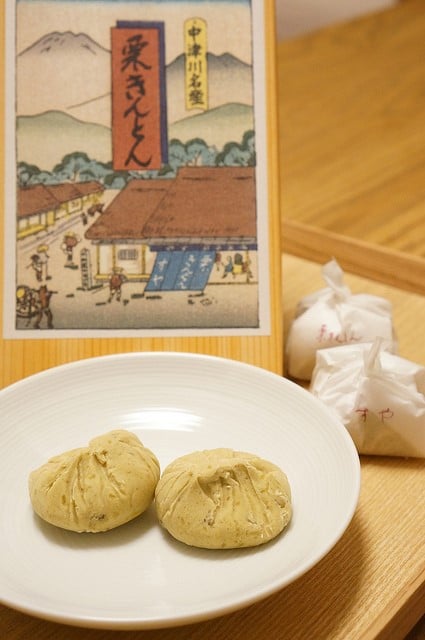 栗きんとん (candied chestnuts) are a simple sweet treat in which chestnuts are steamed, mashed and combined with a delicate confectionery sugar before being twisted into a bun shape using a cloth. 栗きんとん is a traditional Japanese New Years’s food.

Sweet potatoes may be added to heighten the flavor, and the snack is best enjoyed with a cup of hot tea.

Boxes of 栗きんとん are popular gifts for friends and family in the autumn. They are available wherever traditional sweets are sold.

Did you enjoy the culinary journey? What would you have chosen? With all that abundance, it is understandable why autumn is called “the season to eat.”

Disclaimer: Whatever you choose to savor, we are not responsible for any weight gain!

Karen Foo’s love affair with the Japanese language started from the song “Say Yes” by Chage & Aska. She currently runs a Japanese learning website to marry her love of Japanese and flash games. You can learn and listen to other useful Japanese phrases at her website, JapaneseUp.

Japanese Lessons from the Crypt: 13 Scary Stories That Teach Language and Culture
Baby Steps: The Best Way to Learn Kanji Without Losing Your Cool