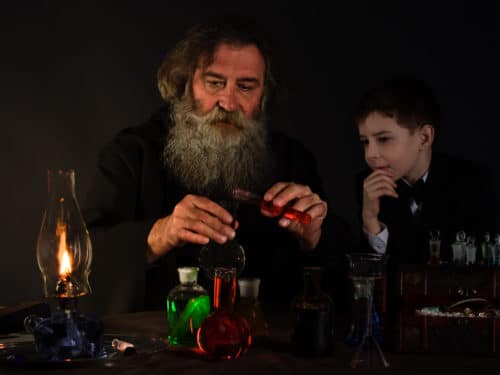 Good Language Learners Demystified: A Look at the Qualities That Make Them Successful

The year was 1975. One simple question launched dozens of studies: What makes a good language learner?

That’s right, scientists Joan Rubin and David Stern sought the answer to this question long before you got fed up with trying to learn Spanish for the third time.

The good news is that they found some answers!

The most important takeaway of their research was this: Anybody can become good at learning languages. Gasp!

That’s great, but how do you do it? Well, you need to observe and copy the secrets and techniques of the most successful language learners.

Start by thinking of a good language learner that you already know.

We often marvel at good language learners, wondering how they pick up languages so fast.

Unfortunately, that’s often where doubt starts to sink in, and we ask ourselves questions like, “How’d that guy learn German in a year when I’ve been studying it for the past seven years and can still hardly introduce myself? What is this sorcery?”

Less-successful language learners are sometimes even in awe of good language learners, almost like they think they’re mystical gurus, possessors of some rare and special knowledge. “Give us the keys to your exceptional skill, oh Enlightened One,” we want to say.

But what if everyone knew the qualities of a good language learner?

By studying what makes the best language learners tick, we can all understand how certain attributes prime you for successful language learning, which ultimately demystifies the process.

Behold: Those coveted characteristics are a mystery no more! I’ve compiled a comprehensive list of qualities that make good language learners successful and, more importantly, ways you can translate those qualities to success in your own language learning.


How to Be a Good Language Learner: We’ve Finally Discovered the Secret Formula!

You’d be hard-pressed to find a good language learner lacking in these qualities. Read on to see which ones you demonstrate well, and which you could be better at.

Good language learners have no room for inhibitions.

When you see these learners happily chatting away, they appear to be confident and unafraid of looking like a fool when speaking.

Fear doesn’t stop good language learners because they know that practicing, even if done imperfectly, is the only way they’ll get better.

They also have tough skin. They don’t quit the first time they get laughed at for committing a language faux pas.

Sure, they might get embarrassed because a native speaker doesn’t understand them, but they just dust their shoulders off and work to improve their pronunciation. They don’t run from their mistakes, they learn from them, and they have the courage to keep on going like a boss.

They’re not afraid to guess. Good language learners use context clues to guess at the meaning of unfamiliar words and phrases.

If they hear the sentence “He lives in a big mansion,” but don’t know the word “mansion,” they can guess it means a really big house! They also create new words if they have to.

For example, they’ll guess that a newly-learned English verb ends with “-ed” in the simple past tense—even if they know there are many exceptions to that “rule”—and they understand that people will likely understand what they’re talking about, even if it’s not grammatically correct.

They accept the fact that nobody’s perfect, so they take these risks on a regular basis. They realize that in most cases, communication is more important than correctness.

Good language learners recognize and learn from their own mistakes and the mistakes of others.

If they conjugate a word incorrectly, they’ll note that it’s something they need to work on. They listen and learn from native speakers as well, copying them as closely as possible.

They pick up on nonverbal clues. If there’s one thing you’ll learn about learning a new language, it’s that there’s a lot more to communication than the words we say.

Good language learners take note of facial expressions, body language and tone of voice to understand how someone’s saying something when they don’t know what they’re saying. With a combination of verbal and nonverbal clues, they can take educated guesses at the meaning.

They identify patterns in the target language. They work to understand the language as a system, identifying key patterns that make learning the language easier and more like the way native speakers learned it.

For example, good learners of Spanish pick up on the fact that, unlike English, the definite articles el and la are commonly used in front of nouns in a sentence. And good learners of English will learn that we really like to use the word “it.”

How do you use present continuous in the third person? What’s the meaning of this slang word? Why do you say this word in one situation, and that other word in a different situation?

These questions are how they learn more of the target language almost every day. They’re naturally curious and always strive to take in more vocabulary and grammar.

Over time, good language learners learn the methods that work best for them to remember new vocabulary and grammar structures. Depending on the learner, they might use flashcards, videos or audio recordings to learn, to name just a few techniques. This helps them process new information quickly.

Good language learners are good at improvisation. They creatively use words, phrases and structures they already know to say what they need to say. Instead of pulling out the translation app, they’ll use “circumlocution,” or the roundabout way of saying things.

For example, if you don’t know the word for “a watch,” you can say “the thing that shows the time.” This promotes fluency as well as self-expression.

They don’t need to know the meaning of a new word right away, and they don’t worry when they don’t understand 100% of what a speaker is saying.

There won’t be much learning going on if you tune out (or freak out) as soon as you hear an unfamiliar word. Good language learners are patient enough to understand that one day they’ll be able to have conversations in which they know all the words.

They’re also patient with themselves. They know it takes time to learn a language, so they don’t get frustrated easily.

Good language learners accept the language for what it is, forgiving and being kind to themselves if they don’t progress as quickly as they’d like. They don’t put a lot of pressure on themselves because they see learning the language as a journey. They go with the flow, understanding that things like grammar are not the be-all and end-all.

Good language learners understand their “why.”

Whether they need the target language to get a better job, to get into grad school overseas, to survive in a foreign country or simply to connect with their family or roots, good language learners are deeply motivated. Their reason for learning a language often goes beyond getting a good grade in a class. They take language learning very, very seriously.

That motivation leads them to learn independently and practice consistently. Teachers don’t have to force them to conjugate verbs each night or to practice with a language partner on the weekends.

Good language learners actively seek out opportunities to practice the language outside the classroom. They practice as much as possible.

That’s why it’s important to choose the right language. You won’t stick with a language that makes you yawn. And in case you were wondering, that also explains why you’re probably not fluent in the language they forced you to take back in high school.

Learning from the Good Language Learner

I hope you can now see how learning a new language isn’t so mystical. There’s no sorcery or witchcraft involved, but there is a secret formula. And now you have it, too!

But remember: All of this information is futile if you don’t apply it. So take action, Newly Enlightened One, and start practicing right now!

Layla A. Reaves is a freelance writer based in Maryland. She spends her spare time working on the next Great American Novel and actively plans her upcoming trips each day. Her motto is “keep going imperfectly.”