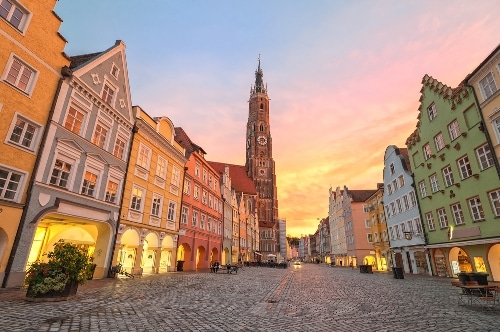 A German Journey: 5 Destinations Where You Can Self-study German Through Real-life Immersion

Wilkommen in Deutschland! (Welcome to Germany!)

Are you excited to explore the many extraordinary sights this country has to offer?

The classic European cities like Munich and Cologne, the quaint towns, the sprawling messy urban playground that is Berlin?

Are you excited for castles and mountains, for beer and sausage?

Great! But don’t get too excited. Because this is also your time to work.

And by work, of course, I mean work on your German. But don’t panic!

I’m not advocating that you sit in your hotel room studying vocabulary instead of exploring this diverse and beautiful country. There are plenty of built-in opportunities while traveling to practice and improve your German. Self-study German at these 5 different types of tourist attractions, and you’ll return to your home country better at Deutsch than ever.

How Should You Self-study German as a Tourist?

Don’t be embarrassed to take notes.

Are you too embarrassed to pull out your phone in a restaurant, museum or historic site and start using your flashcard app? Don’t be. Everyone else will have their phones out to take pictures, and let’s be honest: You’ll be so tired by the end of your trip that there’s no way you’ll remember all this new vocabulary unless you write it down. Didn’t get an international data plan? Don’t worry! Just bring along some old-fashioned paper flashcards or a notebook. Trust me, you’ll be happy when you get home and have a built-in study resource for everything you learned on your trip.

Part of traveling is being spontaneous and having enough flexibility to take the time to explore unexpected opportunities. And part of that involves interacting with people. Lots of people! If your waiter or bartender tries to chat you up, take the opportunity—don’t rush off to your next destination. If your tour guide asks you where you’re from, answer, in German. Be open-minded and take the time to chat with people. You never know what vocabulary and grammar you might get to practice, and what cool experiences you might end up having.

Avoid spending all your time with other English speakers.

Traveling with your best friend from college, your husband or parents? Great. Traveling with someone else is usually a lot of fun. But the problem with spending your whole trip with your English-speaking friend is, well, you’re not going to speak much German. Don’t be afraid to spend an afternoon or an evening on a separate activity. It will force you to talk to strangers and to leave your English comfort zone.

The first time I ever visited Germany, as a tourist back in spring 2010, I learned my first two German words: Erdbeer (strawberry) and Spargel (asparagus). Why? Because Germans love to eat strawberries and white asparagus in springtime, and in fact are fond of dedicating springtime festivals to these foods. I didn’t know any German at the time, but you better believe I remembered those words—after all, they were plastered on signs all over Munich. So my point is: Pay attention to what you’re seeing, doing and experiencing. Even if you’re a beginner German student, you’re sure to learn something along the way!

5 Perfect Places to Self-study German While Traveling in Germany 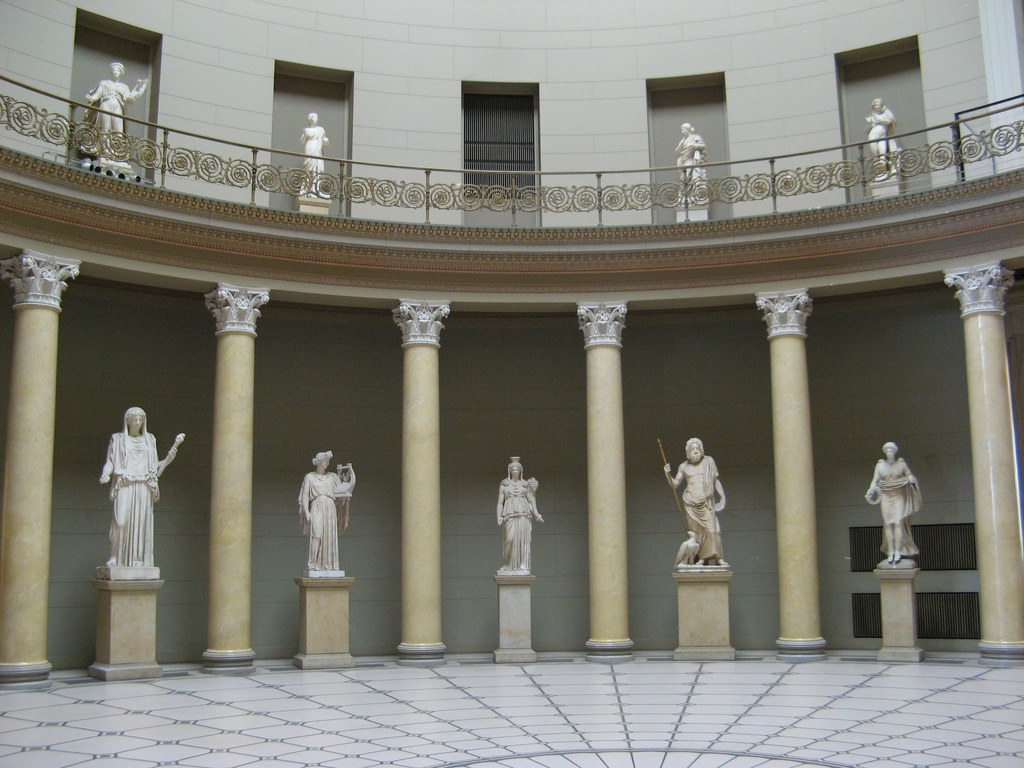 How can you self-study German at a museum?

Visiting museums is a great way to learn about German history and culture, as well as about pan-European culture, ancient culture or pretty much anything else you’re interested in. Of course, they’re also great resources for learning the German language. When you visit museums in Germany, make sure to read all the plaques and explanatory panels in German. Most museums will offer panels in English as well, but you must resist the urge to quickly and easily digest information in your native language.

In that same vein, make sure to get a German audio guide instead of an English one. You may not know all the words, but you can use context clues based on the objects you’re looking at to figure out what that Deutsch audio guide is describing.

5 German vocabulary words you might learn at a museum:

Let’s take a trip to: The DDR Museum

You’ve decided you want to learn a little something about German Geschichte (history), so you head to the DDR Museum near Museum Island in Berlin.

In the museum, you take a tour of all the different exhibits, learning about various aspects of culture in East Germany, including Mode (fashion), Innendesign (interior design), Politik (politics) and Kultur (culture).

You then practice driving a Trabant (an East German car) and take a test to see whether you would have been considered a Staatsfeind (enemy of the state). 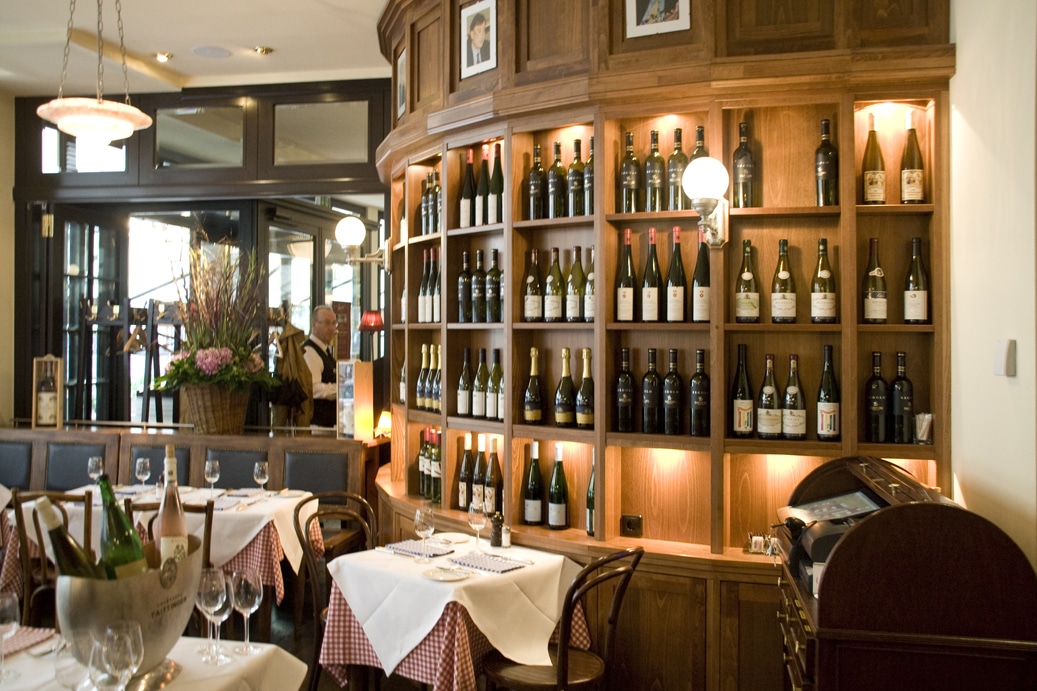 How can you self-study German at a restaurant?

Make sure to ask for your menu in German. Most restaurants in major tourist cities like Berlin, Munich and Cologne will have menus in English, but don’t be afraid to ask for one auf Deutsch. Similarly, make sure to ask your waiter or bartender to speak German with you. Many waitstaff will switch into English, out of politeness or desire to practice, but don’t be afraid to nicely ask to speak auf Deutsch. It’s the only way you’ll learn.

5 German vocabulary words you might learn at a restaurant:

When you’re in Berlin, you head to Weltrestaurant Markthalle, a German-Austrian restaurant located next to the market hall Markthalle Neun in Kreuzberg. You enter the dark-wood paneled restaurant and greet the bartender at the Tresen (bar counter).

You take your seat, basking in the light from the Kerzen (candles) and ask for your Speisekarte (menu). Should you order the Käsespätzle (a special German macaroni and cheese) or the Schnitzel (an Austrian fried pork dish)? So many dishes to try! But no matter what, you can’t go wrong. The only real question is whether you want to order a kleines Bier (a small beer, usually 0.3 liters) or a großes Bier (a large beer, usually half a liter), and whether you have room for Nachtisch (dessert).

How can you self-study German at an off-the-beaten-path attraction?

Finding an off-the-beaten path attraction can be an adventure in and of itself. Especially if you don’t have data and therefore don’t have Google Maps on your phone, it can be quite difficult to find something that’s not a common guidebook fixture.

That’s why off-the-beaten path attractions are the best places to study German directions.

You have to be comfortable stopping random locals on the street and asking them where on earth you are. Plus, since off-the-beaten path attractions often don’t have plaques or other explanations, they represent a great opportunity to approach others and ask them for an explanation. Basically, this is the time to come out of your shell and practice some everyday Deutsch.

5 German words you might learn at an obscure attraction

Sich verlaufen — To get lost

Über die Strasse — Across the street

Let’s take a trip to: Teufelsberg

You’ve decided to head out of central Berlin and explore Teufelsberg (Devil’s Mountain), a hill made of World War II Trümmer (rubble) and topped by the National Security Agency’s listening tower from the kalter Kreig (Cold War).

You hop off the S-bahn into Grunewald (green forest) and start hiking between the Bäume (trees), keeping an eye out for the Wildschweine (wild boar) that roam Grunewald.

Unfortunately, you get lost several times on the Wege (paths) that meander through these forests and up and down this hill, but finally you emerge on a plateau that allows you to see the listening tower with its 1960s sci-fi aesthetic—and plus a great Ausblick (view) of Berlin. 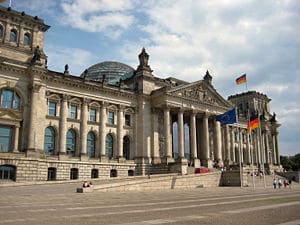 How can you self-study German while exploring a neighborhood?

One of the greatest pleasures of traveling in Europe is wandering its many varied, quirky and walkable neighborhoods and catching a glimpse of life in another country. Germany is no exception—there are plenty of interesting neighborhoods to see all over the country. But don’t think that just because you’re wandering, you can slack off on your German learning duties.

Neighborhoods are great places to learn German. Poke into esoteric shops and engage the shopkeepers in conversation, or just practice saying hi and bye. Eavesdrop on Germans talking in cafes. Ask people for directions. Go to a grocery store and ask for help. This way, you’ll learn ordinary German from ordinary people.

5 German words you might learn while exploring a neighborhood:

Let’s take a trip to: Mitte

One of your days in Berlin, you decide to poke around Mitte, a swanky neighborhood near downtown. But has it always been swanky?

When you stop at a Café (cafe) for some Kuchen und Kaffee (cake and coffee), the proprietor tells you that Kabarett (cabaret) shows that used to light up Mitte’s streets in the 1930s. He tells you about the artists’ collectives that sprung up in Mitte directly after the fall of the wall, before Gentrifizierung (gentrification) closed many of them down and turned this former East German neighborhood into the sleek area that it is today.

After the cafe, you poke into a Moleskine shop and ask about the Nötizbücher, then walk past the Straßenkünstler (street artists) at Hackescher Markt before heading out to the River Spree. 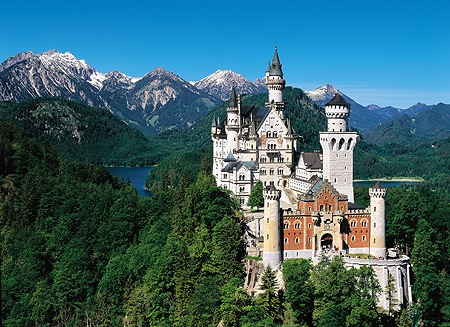 How can you self-study German while exploring a historic site?

It’s hard to visit Germany without stumbling across a historic site. For a new country, Germany has a lot of history. When you’re visiting historic sites, you can use a lot of the tips already covered in the museums section and the off-the-beaten path section of this post. Get a German audio tour guide. Read the German plaques. Ask locals or tour guides for more information. That way, you’ll practice your German and learn a lot about German history—which is a huge part of German culture.

5 German words you might learn at a historic site:

Let’s take a trip to: Neuschwanstein

After your trip to Berlin, you decide to escape from the big city and see one of Germany’s many, many castles.

Neuschwanstein (New Swan on the Rock) Castle is probably one of the country’s most famous. Located in the Alps outside Munich, this castle was built by King Ludwig of Bavaria in the 19th century. To get to the castle, you hike from the train station towards the Berge (mountains), past Kühe (cows) in the Felder (fields).

At the castle, you buy a Bretzel (one of those giant pretzels that Bavaria is famous for) and ask a tour guide for some information. He tells you that King Ludwig loved Märchen (fairy tales) and built his Schloss (castle) as a reference to many of the tales that he loved, and that the castle frescos are illustrations of scenes from Richard Wagner’s Opern (operas), which Ludwig also loved. You climb the Schlossturm (castle tower) and stare out over the Tal (valley), admiring the beauty of Germany’s countryside.

Traveling should be fun, but, as you can see, it can also be very educational.

Use your trip to Deutschland as an opportunity to pick up some German.

Whether you love visiting every museum in any given city or prefer hanging out at a cafe all afternoon, you’ll be able to find ample opportunity to practice the German you already know and pick up some new vocabulary and grammar.

13 German Immersion Programs for Getting the Language in Hi-def and Full Color
Top German Cartoons with English Subtitles: Stream and Learn Now