Summer in Berlin is a time for Spargel, open airs, trips to the Flohmarkt, and the shock of your first encounter with Freikörperkultur.

Regardless of where you are right now, come and take a look at what you have to look forward to by spending summertime in Berlin – and learn some helpful German words and customs along the way!

Summer in Berlin: 9 German Vocabulary Words You Must Know

These special words will get you geared up for enjoying summertime in Berlin. 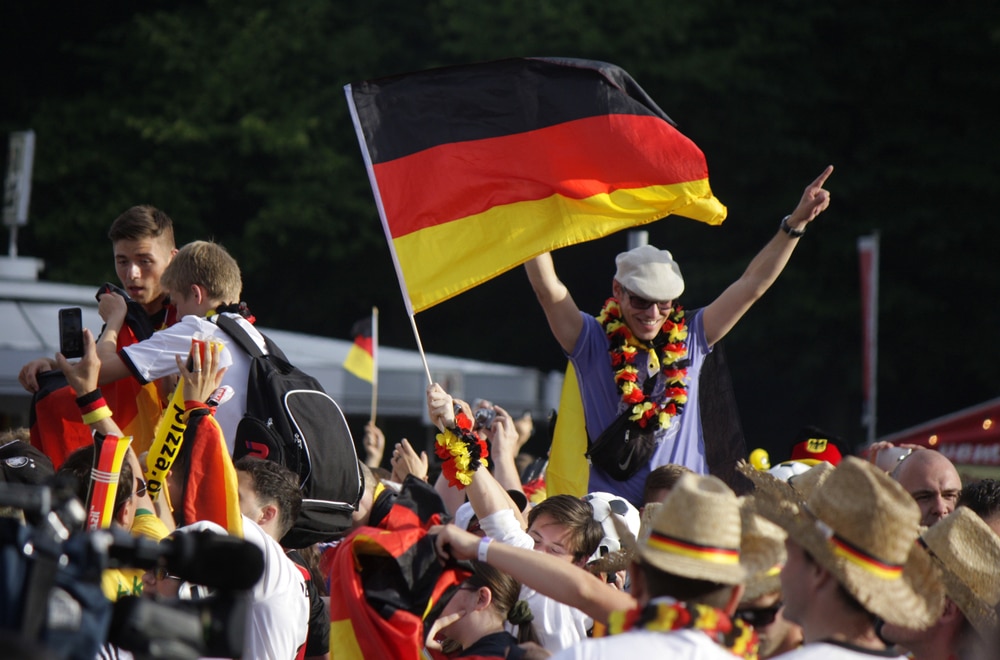 For some reason, German flag-wrapped fans of the Nationale Mannschaft this year omit the first three letters from the name of their country when they yell across subway stations before and after World Cup games. No matter what kind of person you are, you can definitely find a public viewing area that’s to your taste. The Fanmeile right behind Berlin’s Brandenburg Gate is the main viewing area for all of Germany; it always gets shown on TV. The city also has a few arena-like viewing areas near Ostbahnhof and Hauptbahnhof, or here are some more public viewing suggestions. 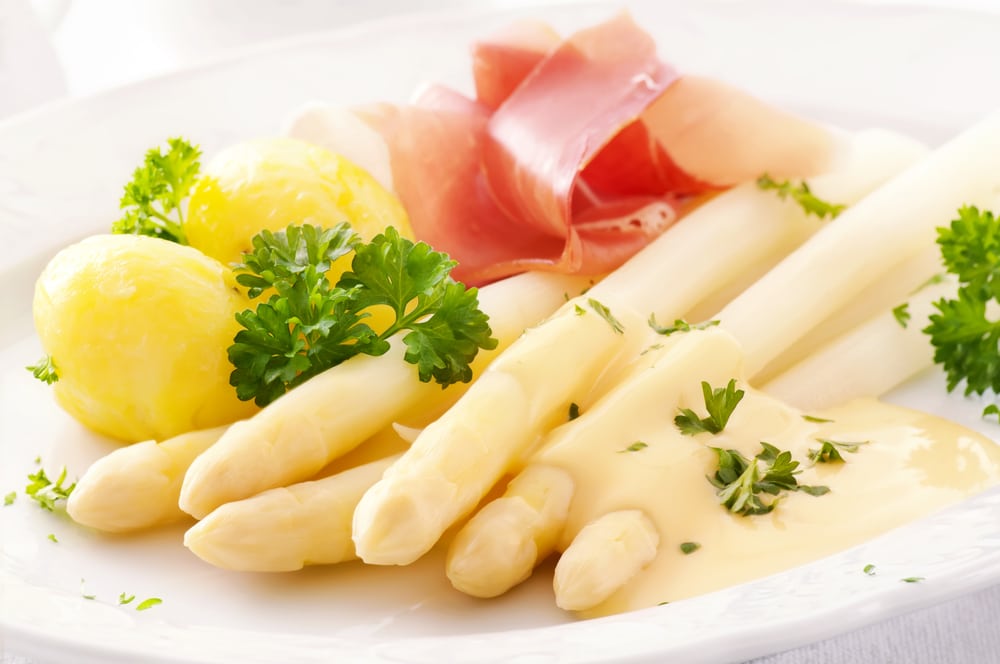 This year, when the Spargelzeit came for the earliest time ever in recorded Prussian history, ganz Deutschland exploded with enthusiasm for Spargel, or white asparagus. It’s difficult for people to understand precisely why there’s so much enthusiasm for this particular vegetable, but if you give it a try, maybe you’ll get swept up as well.

Spargelzeit is the period from mid-April to June 24 during which fresh asparagus are available, and restaurants all over Germany have special menus specifically for the Spargelzeit. The best white asparagus in Berlin are grown in Beelitz (the Spargelstadt), which lies just 30 miles southwest of Berlin. In Beelitz they even go so far as to elect a yearly Spargelkönigin!

So dig in! All you need to get your summer started the German way is a little sauce hollandaise and a Kartoffel Beilage. But remember – the final day of the Spargelzeit is Johannistag, June 24, so if you want to follow tradition, eat your Spargel in season! 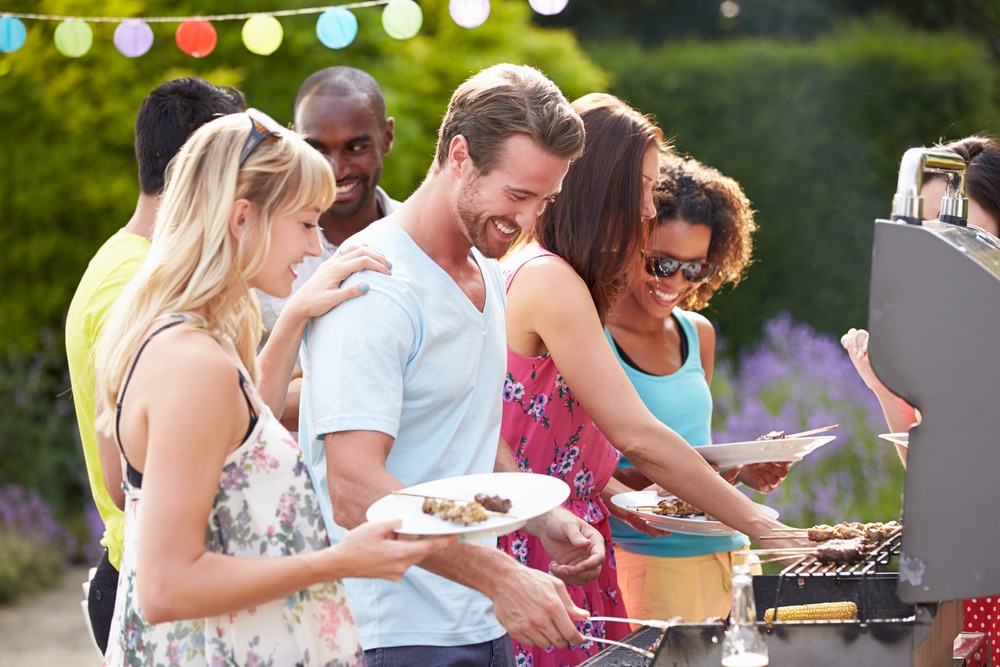 One innovative way for you to enjoy your Spargel is on the grill! Even as an American used to Fourth of July barbecuing, I was always somewhat perplexed by the enthusiasm that my German friends had when they were planning a Grillabend.

Now, three years and a lot of different residence permits later, I too have realized that there’s something special about the atmosphere of good friends, warm weather, and the smell of grilling meat that suddenly gives a sharp new edge of enjoyment to the taste of the typical German Pilsner.

I can also say that the variety of German grill foods sure beats what I was used to back home – marinated Nackensteak and Bratwurst taste great in crispy Brötchen. Other Multikulti influences on an evolving German cuisine mean that you can also find Halloumi (Grillkäse) and Fleischspieß (shish kebab) in every grocery store as well.

If having your barbecue at a park, make sure they don’t have Grillverbot, a ban on grills. I recommend that you go to Berlin’s Görlitzer Park or Hasenheide, where there will probably be many other expats doing the same thing.

Though I would find it embarrassing to admit, Berlin deserves its reputation as Techno Hauptstadt. Ever since the Berlin Wall fell and the city had large spaces to convert into electronic music venues, partygoers have been coming from all over the world to Berlin. During the summer, electronic music enthusiasts of all shapes, sizes and unnatural hair colors crawl out of their hide aways (refitted heating plants and city swimming pools), into daylight.

Open Air is an outdoor electronic music concert, though there are many different kinds of open airs. Some clubs will just advertise a daytime event as an “open air” to prey on the unwary. The real open airs, made by the anti-capitalist, never-gonna-sell-out Urberliner (original Berliner) are best located through connections or members-only websites. Equipped only with google maps coordinates, you might be led into the deep Pankow forest near the abandoned Iraqi Embassy to the German Democratic Republic for the best electronic music experience of your life! 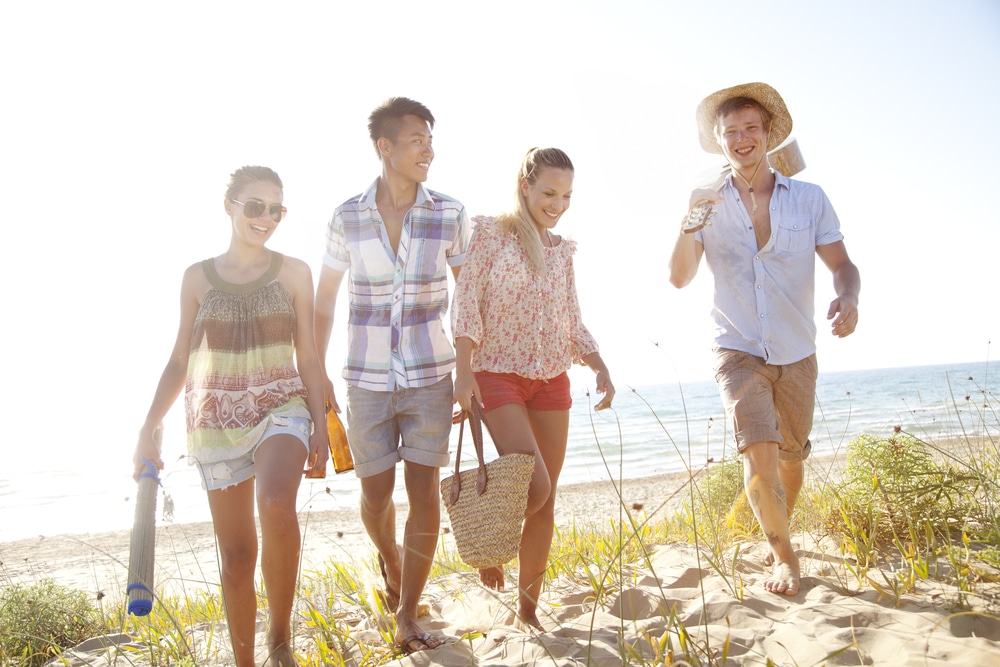 For those who are satisfied with something less complicated than underground electronic music parties, an ideal Tagesausflug (day trip) might be as simple as a trip to the beach. However, the literal-minded Germans usually refer to it as baden gehen (to go bathing) rather than schwimmen gehen (to go swimming). Whether you want to go to a See (lake), Freibad (outdoor pool) or Strandbad (commercially operated beach) depends on your mood, but if you’re looking for some peace and quiet, you’d be surprised how many people a 2,50€ entry fee manages to scare away.

The two seas on Germany’s border, the Nordsee and Ostsee, are great places to get seafood or go swimming. From Berlin, head north to the Ostsee (Baltic Sea) for a weekend getaway at the beach. You might be surprised to notice the beaches there are dotted with wicker benches, called Strandkorb (beach basket). The winds on the German beaches are so strong (and the sun never really heats up to Mallorca temperatures) that it’s necessary to protect beach goers with personalized enclosures.

German beaches also have something that I never saw before in the cold and rainy city of my birth: nudists. In Germany, this phenomenon is called FKK, or Freikörperkultur (free body culture).

You might be tempted to attribute the proliferation of FKK to the German lack of squeamishness about things like toilet etiquette, but the history of naturism and nudism in Germany actually goes all the way back to back-to-nature movements in the Kaiserzeit.

And if you’re as pasty and unused to the sun as a Pacific North West guy like me, remember to bring some Sonnencreme to avoid Sonnenbrand (sunburn) or Sonnenstich (sunstroke). 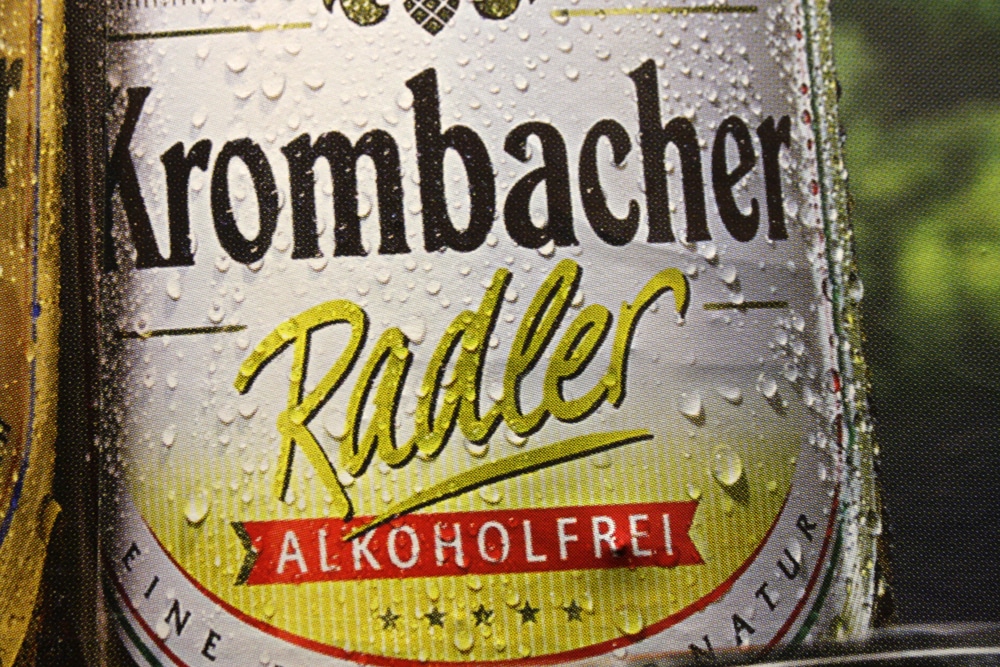 After you’re tired from jumping off the Sprungbrett (diving board) and Rutsche (slide) at the pool, you’ll need some refreshment! Radler, which I spat out and found undrinkable during my first encounter, has now become one of my favorite German summer drinks. You see, in the same way that mixing carbonated water with apple juice creates the new drink of Apfelschorle, mixing beer and lemonade results in Radler. Also watch out for its beer and cola cousin, Diesel.

Unique to Berlin, you may also want to try a  Berliner Weiße, which is a mix of wheat beer and raspberry or woodruff syrup. The red or green summertime drink is usually served in bowl-shaped glasses, and only contains 3% alcohol – so you can keep drinking and enjoy a longer night out! 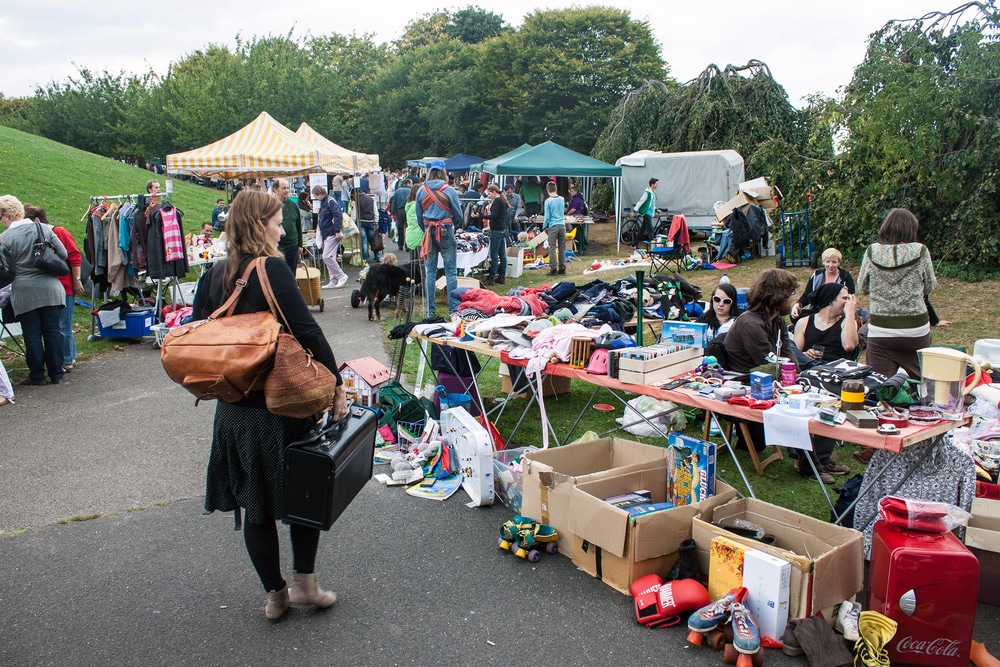 For those who don’t like to get wet, you might prefer to spend your summer days at a Flohmarkt (flea market). For me, the two eponymous Flohmärkte in Berlin (add umlaut for plural) are Mauerpark Flohmarkt and Maibachufer Flohmarkt. If you’re looking for something more off the beaten path, like a midnight clothes Flohmarkt or one based on bartering, try looking in a local newspaper like Zitty.

It’s only by going someplace like this with someone who knows who they’re talking about that you start to realize just how limited the American culinary experience can be. This mile-long flea market, located on the bank of Landwehrkanal in a nice part of Kreuzberg, is a great place to find any kind of Turkish or Middle Eastern food that you can imagine. They have different preferences for meat, a completely different set of spices (I never knew what tahini was before!), and even simple fruits like figs and dates can taste amazing if they’re fresh. This is a great place for you to try new foods (I’m crazy about something called Osmanische Soße – sauce of the Ottomans) or haggle in German. Sample a fresh Gözleme (a traditional Turkish dish similar to a savory crepe) as well. 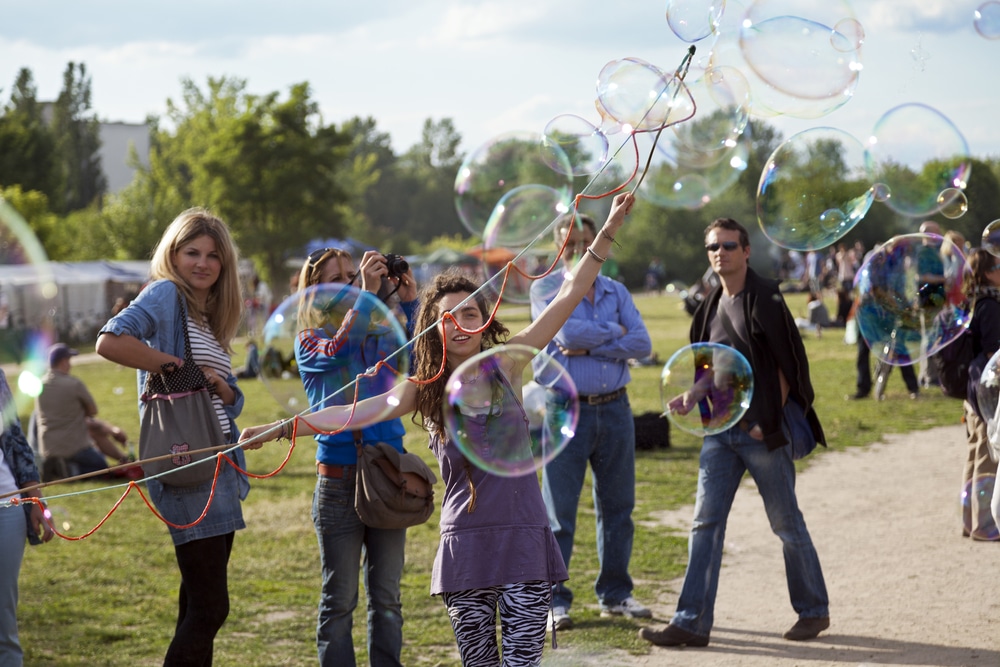 Mauerpark is a park in Prenzlauer Berg that, as a result of being listed as a must-do in Berlin guide books, is flooded with tourists of every creed and color each Sunday. That being said, when I have guests from out of town, I still take them there. We go to see the shopping cart robot, sample from a huge selection of food, hear live music and watch people with hobbies that draw attention – like juggling, Frisbee and hula hooping. In a tent that sells musty objects that have been donated, you can buy old German postcards or German books printed before World War II.

Enjoy your summer in Berlin!