It’s time to rewire your brain to think of German as something fun.

You want to kick-start your German skills?

Recharge your batteries and give your brain a little jolt of excitement with German television programs.

But there’s some much out there to watch–which TV series to choose?

This guide will help you find a German language TV series that’s perfect for your skill level, learning style preferences and personal interests. We’ve scoured all the timeless classics and recent critics’ favorites, across all genres.

You’re guaranteed to find something you’ll love to use to learn German!

Watching series or movies is a fun and efficient way to learn a language.

Not only is it easier to understand new vocabulary with the added context of a story and its visualization, but you also get a feel for pronunciation and word stress.

Moreover, listening to correct sentence structures over and over unconsciously trains your intuition for cases and putting words in the right place.

Last but not least, our ability to memorize is boosted when we connect information with emotion. So action, suspense, humor and drama aren’t just the ingredients of good entertainment, but also of good learning experiences.

How to Make the Most of German TV Series

Prepare some basic vocabulary on the main topic of the series before you get started. So, if you’re watching a love story, check out expressions for dating and romance. If it’s a historical drama, look up key terms from the featured time period. A look at the series’ websites will also give you a lot of useful vocabulary and background information, but beware of spoilers!

Also, be sure to check out FluentU for an extra jolt of practice with German language television.

Here, you’ll get exposed to the kind of real-world dialogue present in German television programs. And it’s not just about exposure–FluentU is all about active learning. The new German vocabulary and expressions you learn through video content will be compiled in flashcards and a running vocabulary list to refer back to and study later.

Check it out with the free trial!

Eat popcorn! And obviously pause to to look up crucial words that you don’t understand.

If you can’t follow the plot, take a look at an episode summary online to get back on track.

If it’s an ongoing series, you can post your opinion in a fan forum, which is a good opportunity to chat with native speakers and repeat vocabulary.

How to Choose Right Series for Your Level

Remember that even for advanced learners it’ll be difficult to understand every word, so don’t be too hard on yourself.

You may actually encounter more dialect on TV than in real life.

For most people, German from the northern and western regions is easier to understand than that of the eastern and southern regions, but that ultimately depends on what you’re used to hearing.

The more urban the setting and the younger the speaker, the less dialect you will encounter…but the more colloquial the language is likely to become.

The so-called Umgangssprache isn’t only spoken by youngsters, but it’s also spoken–to a varying degree –by people of all ages and social backgrounds. What makes it so difficult for learners is that you usually don’t find it in textbooks and dictionaries, but only out in the real world.

Private TV channels tend to use more colloquial language than public broadcasters, but it mostly depends on the target audience and the social context of the series.

Stay away from dubbed foreign series. As you may have noticed by now, it takes a lot more words to express yourself in German than in English. So people have to talk extra fast in translation to squeeze in all the information in about the same time. 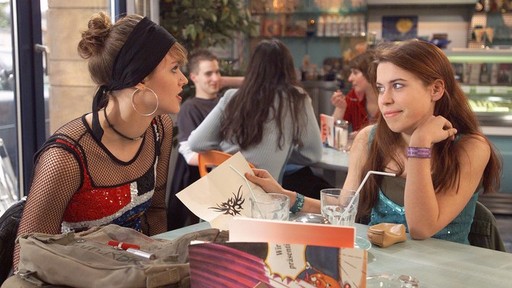 As the first German soap opera, “Lindenstraße” is an absolute classic. Set in a fictional Munich street, it portrays the everyday lives of average people. Since the first episode in 1985, the series mirrored social developments in German society, picking up topics like drug abuse, unemployment and homosexuality. Even current political events such as elections are integrated into the plot by shooting additional scenes shortly before airing.

It’s a great series for learners, as the characters represent a broad variety of language from nearly textbook German to Umgangssprache and moderate dialect. “Lindenstraße” gives you a realistic impression of how different people speak in different social contexts.

You can find this series on DVD.

Nice extra: as only die-hard fans can still keep track of what happened in the course of 30 years, they created a “Lindenstraße” encyclopedia. 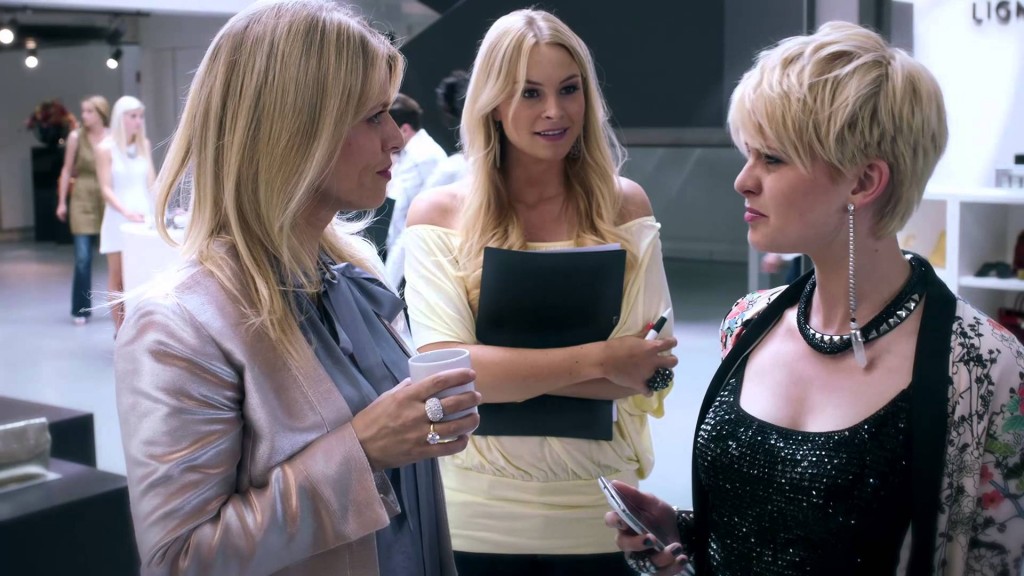 The initial forbidden love story focuses on Jan Brandner and Julia von Anstetten, who fall in love at first sight. But Julia’s wealthy, aristocratic clan would rather see her marrying into the family of a business partner. And it turns out that’s not the only reason why they can’t be together…the characters have changed continually since 1995, but the formula stays the same: the plot develops in the interaction of the worlds of the rich and the middle class.

Yes, it’s cheesy and predictable, but people talk about simple things in simple sentences, which makes it very easy to follow for beginners. The level of difficulty is slowly rising with each decade, as people speak faster and use more colloquial language. 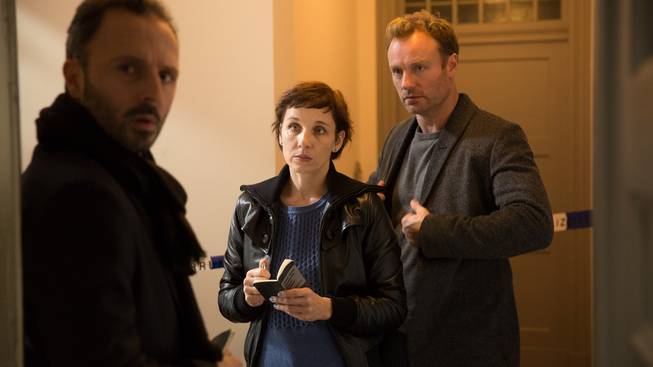 …is the longest-running and most popular German crime series. A lot of devotees watch it with friends at home or in a pub and exchange bets on the murderer. “Tatort” features some of the most well-known German actors such as Til Schweiger (“Inglorious Basterds”) or Sibel Kekilli (“Game of Thrones”).

Since 1970, the opening sequence has remained the same, but the episodes have kept in touch with zeitgeist. The series’ trademark is its critical perspective on the social setting of the crime, debating topical issues like integration, extremism or corruption.

Especially interesting from a language point of view is that the episodes are produced by different regional teams in Germany, Austria and Switzerland and are starring different inspectors, making it several series in one.

So, you can easily avoid the dialects that are most difficult for you, or, if you’re planning to visit, familiarize yourself with a particular one. The pace and use of Umgangssprache differs with inspectors and the social milieus in which they’re investigating.

Difficulty: varies greatly with inspectors. Advanced beginners can start with inspector Borowski (Kiel) or the quirky young duo Dorn and Lessing (Weimar), whereas Thiel and Boerne (Münster) are for pros.

The latest episode is available online, previous ones on DVD. 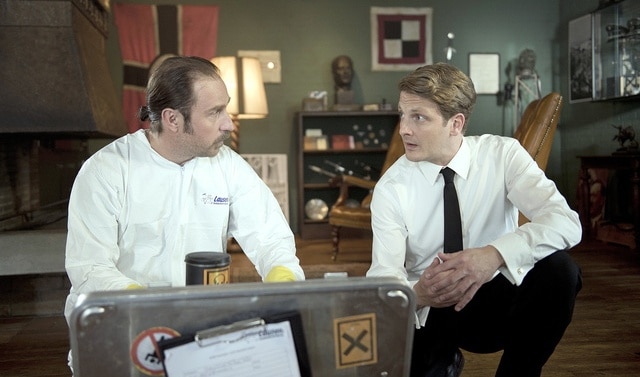 It’s not another crime series as the title suggests, but a witty comedy about the man cleaning up the mess after the murder. On the job, down to earth Heiko “Schotty” Schotte has to deal with the friends and family of the deceased, thereby plunging into different lives in each episode. As they’re getting wrapped up in discussions leading from personal to philosophical problems, both Schotty and his counterparts come to question their own worldviews.

Although the main character speaks with a charming northern German accent, the language is easy to understand. Like in “Lindenstraße” and “Tatort,” you get to know various characters from different backgrounds and their way of talking.

The first seasons are available on DVD.

Nice extra: you can download a life-sized poster of Schotty 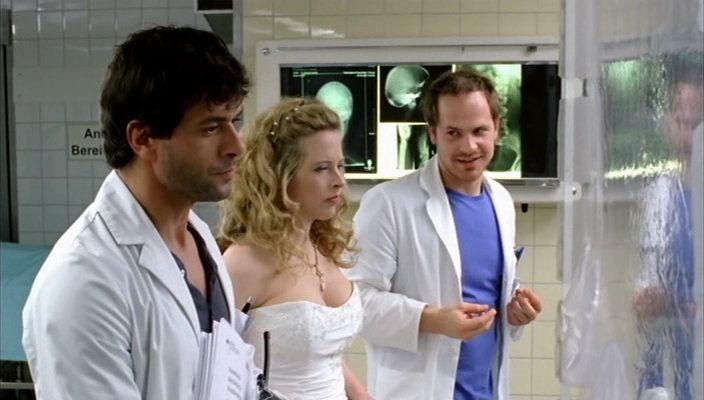 Main character Gretchen Haase has been called the German version of Bridget Jones: a woman in her late twenties struggling with her career, love life, confidence and weight. When she starts her residency at the hospital, her former high school crush Marc becomes her boss. With his good looks, sarcasm and overconfidence, he’s the exact opposite of hopelessly romantic, clumsy Gretchen, which leads to both friction and attraction.

Even though you may not be able to get every instance of wordplay, as there’s quite a bit of colloquial language involved, a lot of the humor is based on the exaggeration of stereotypical gender roles.

Nice extra: how Gretchen are you? Take the test! 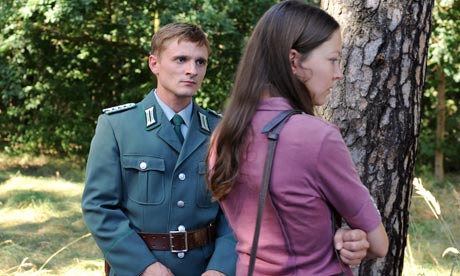 This series set in the GDR in the 1980s revolves around the lives of two families whose fates become intertwined. Against all odds, the daughter of dissident singer Dunja Hausmann and the son of Hans Kupfer, a high-ranking official in the secret police, fall in love.

As the drama unfolds, the main characters are forced to reassess their attitude towards the regime and try to protect themselves and their loved ones by changing strategies of compliance and resistance.

Apart from some GDR-specific lingo, the language is pretty standard and the pace quite moderate.

Vampires are booming on-screen and Germany is no exception. In this web series, a new vampire awakes amidst fighting vampire guilds in Cologne. There’s a lot of action and fake blood, but the camera always fades out before you can see something that might ruin your appetite.

The language is pretty standard, so it’s easy to follow. One character speaks English sometimes.

All episodes are available online. 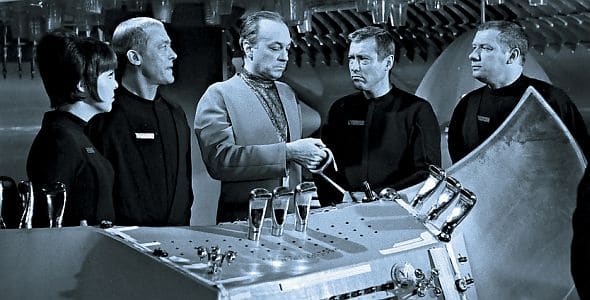 Did you ever wonder what the German version of “Star Trek” would look like?

In the first German SciFi series, Commander McLane and his crew aboard the space cruiser Orion are protecting Earth from extraterrestrial threats.

While fighting against the hostile “Frogs” (read: aliens, not Frenchmen!), he often finds himself at odds with authorities. The 1965 cult black and white series features hand-made special effects, 60s hairdos and retro gadgets.

The good thing about the future according to the 60s is that there are no dialects and no Umgangssprache and the language is rather formal. On the downside, you should be fairly familiar with technical vocabulary. 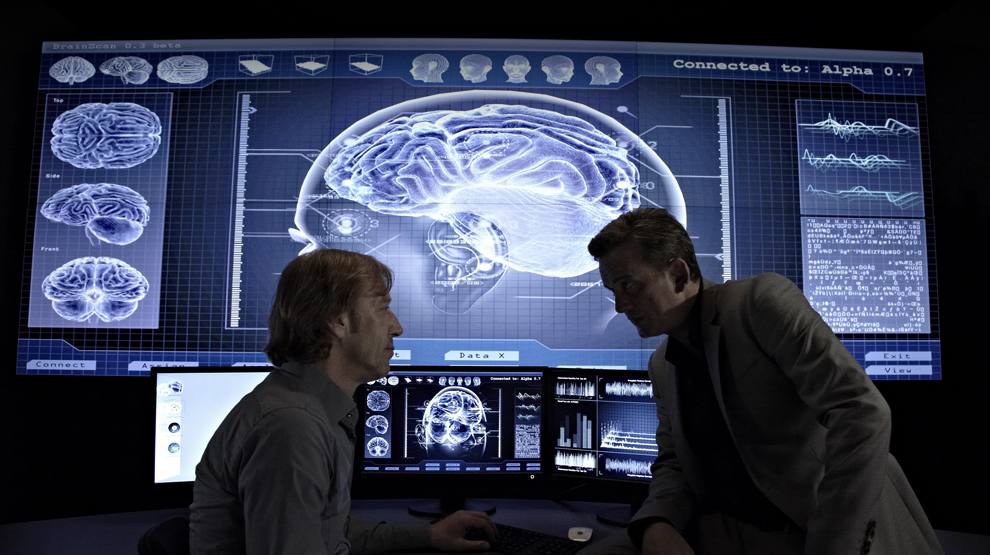 In this dystopian series set in 2017, Germany has become a surveillance state. When a group of civil rights activists is protesting against the new brain scanner, they stumble across a conspiracy even bigger than they imagined. But will they be able to stop the powerful corporation Protecta Society?

Being the fist transmedia German series, “Alpha 0.7” has different layers. The TV series works on its own, but you only get the complete picture in combination with the corresponding radio play and website, which is unfortunately offline by now.

The characters speak standard language at a moderate pace, but be prepared for some IT-specific vocabulary. Although the young activists talk faster and use more colloquial language, it’s easy to follow the plot.

Available on DVD or YouTube. You can still buy the corresponding radio play on CD.