Truly this is the low-hanging fruit of learning German.

When you got to the sports chapter in your German textbook, you probably cheered because so many of the words are recognizable to English speakers.

But at the end of the chapter, maybe you realized that you have no idea how to actually discuss sports in German.

And that’s the whole point, right? Parsing the minutiae of that mind-blowing play from last night’s game. Plotting out extensive predictions for the upcoming tournament bracket. Commiserating with other superfans after your favorite team loses.

Plus, when was the last time you turned on a sports broadcast and heard the announcer say something as simple as “Er spielt Baseball!” (“He plays baseball!”) Never.

So how do we fix this?

This post will help you get started with the real German vocabulary you need to follow games and talk about sports.

Where to Score German Sports Vocabulary

One of the first things you can do is start watching actual German sportscasts. There’s quite often a short, one- to three-minute sport summary at the end of the nightly broadcast of “Tagesschau” (“Daily Show” — no relation to the American comedy program).

This is an excellent show for you to be watching anyway to absorb native-sounding German. It’s the most well-known German news broadcast and you can stream it for free, anywhere in the world. They even have a shortened, 100-second version if you’re low on time. How cool is that?

If you want to focus only on sports, “Sportschau” (“Sport Show”) has tons of clips and articles for you to peruse. Pick the words you find useful and consider throwing them into a vocabulary trainer like Anki. Commit them to memory right away and they’ll roll off the tongue later.

14 German Sports Vocabulary Words to Make You a Meister

This post wouldn’t be that helpful if I just told you to DIY everything. “Here are some German TV shows that talk about sports—good luck!” Not my intention.

To get you started, here are 14 words and phrases you might not find in a basic textbook, but you will see and hear if you go to Germany or watch a bit of “Tagesschau.”

Germany’s last World Cup win was in 2014, and given the preeminence of soccer in German culture, it seemed fitting. 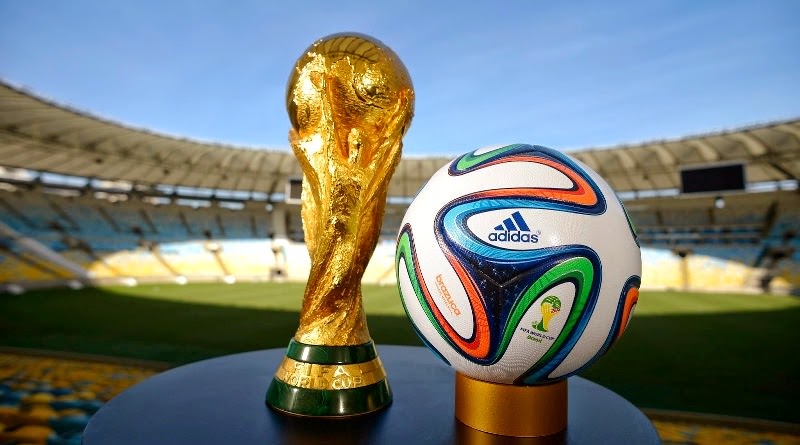 With soccer being Germany’s most popular sport, you don’t always need to specify Fußball-WM. People aren’t going to assume you’re talking about badminton or some other sport unless that’s already the context of your conversation.

Germany has been the Weltmeister (world champion) four times, in 1954, 1974, 1990 and 2014. This is a point of national pride. When Germany hosted the tournament in 2006, a popular song celebrated the previous three victories and hoped for another.

One thing to remember is that the abbreviation WM is pronounced “veh-em” in German. The letters of the German alphabet are pronounced a bit differently from their English counterparts. 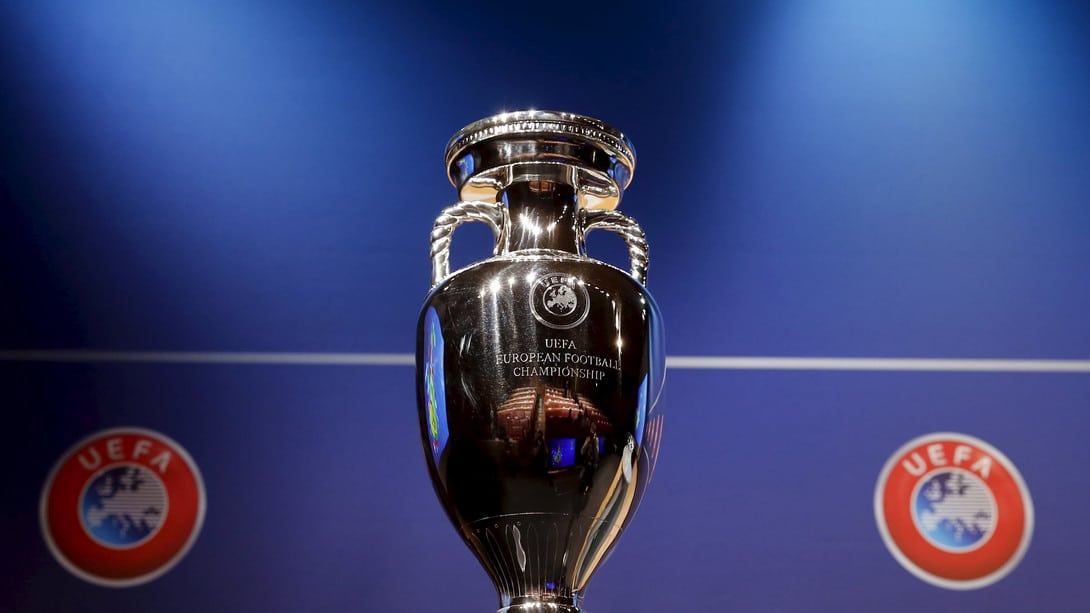 Although Germany is the reigning Weltmeister, they’re not actually the Europameister right now. Portugal holds the title, with Germany having lost to France in the 2016 semifinals. 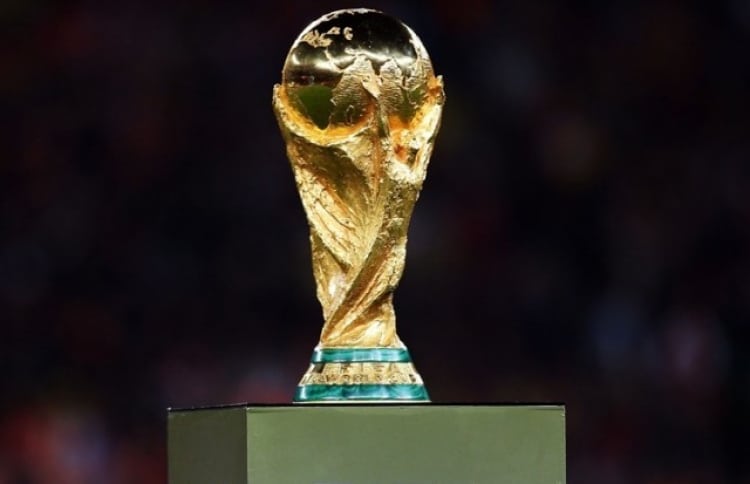 Speaking of winning the cup, that’s an important word to know by itself. It’s not a Tasse in the sense of a coffee cup or a Glas like what you’d pour your orange juice into.

A trophy cup has its own separate word: der Pokal. And since German loves compounding words so much, the actual, physical World Cup trophy would be the Weltmeisterschaftspokal. 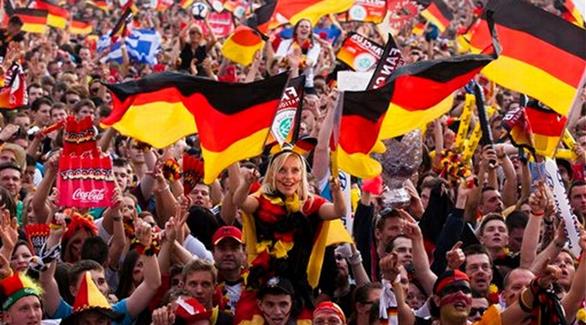 In German, you’re not a sports fan, you’re a sports friend (Sportfreund). In fact, the band from the World Cup song above is called Sportfreunde Stiller. 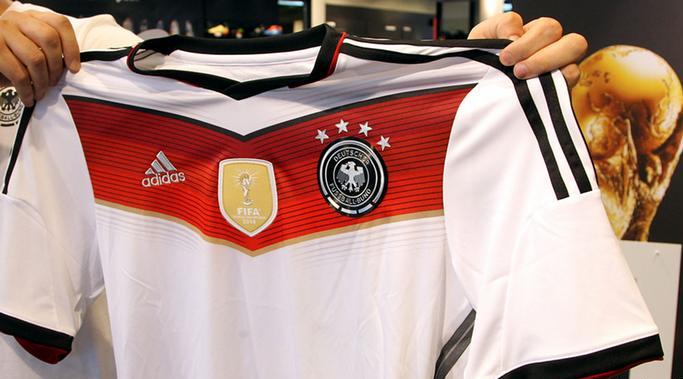 Sportfreunde all over the world like to wear jerseys to represent their love for their teams, and the same is true in Germany.

It’s tradition for the national soccer team’s Trikot (jersey) to have a star for each year they’ve won the cup. As a result, the men’s pre-2014 Trikots featured three stars for the ’54, ’74 and ’90 wins. After the 2014 WM win, tailors across Germany offered to sew a fourth championship star onto fans’ old three-star Trikots.

Personally, I kept mine in three-star mode. It’s vintage now! 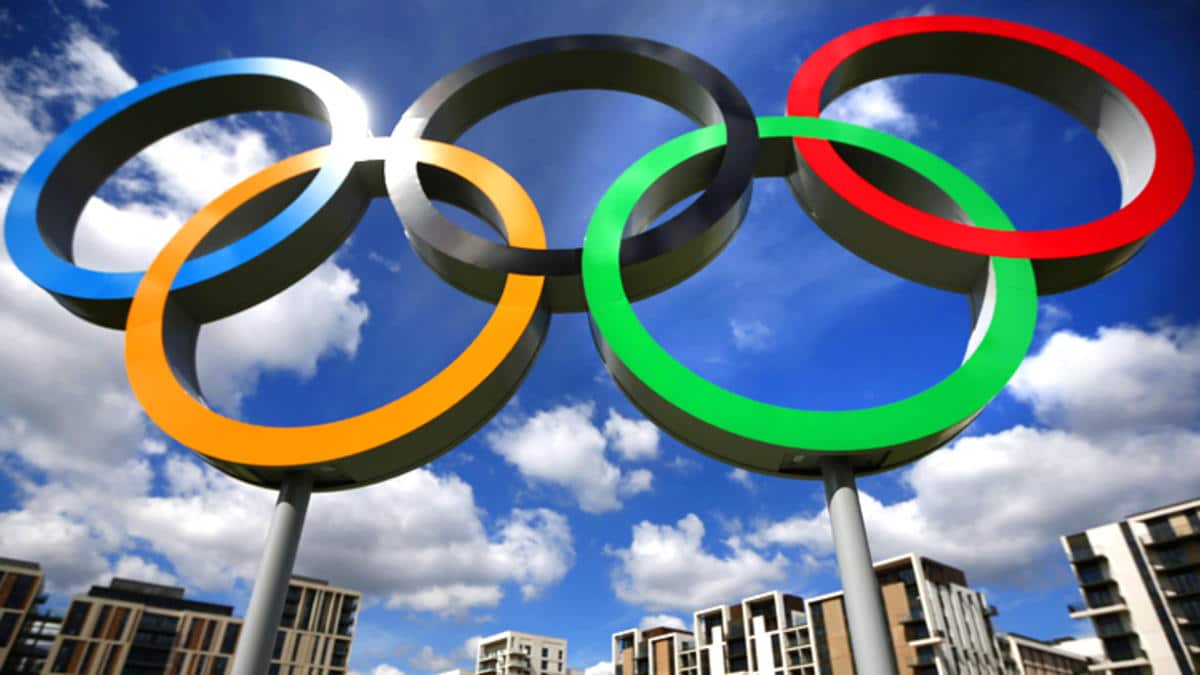 The Olympische Spiele (Olympics) are important to Germany as they are to many countries, so it seems fitting to bring up this topic—and to take a break from all the soccer talk, too.

Just remember that Olympisch is an adjective, so it’s going to need to have some dreaded adjective endings thrown on. 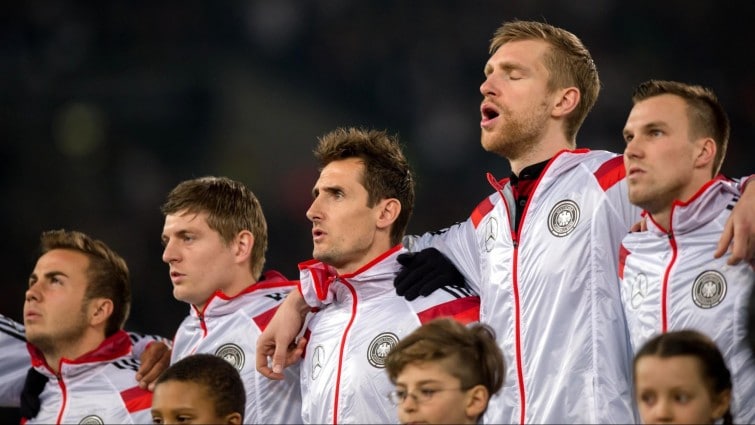 Here’s another Olympics-relevant term. Die Nationalhymne (The national anthem) is, of course, sung during medal ceremonies.

But if you go looking around for the German lyrics, beware: only the last verse is ever sung. The first verses conjure up strong associations with Germany’s Nazi past. If you watch the Olympics with your German friends and start singing “Deutschland, Deutschland über alles” (“Germany, Germany above all”) someone is likely to smack you. 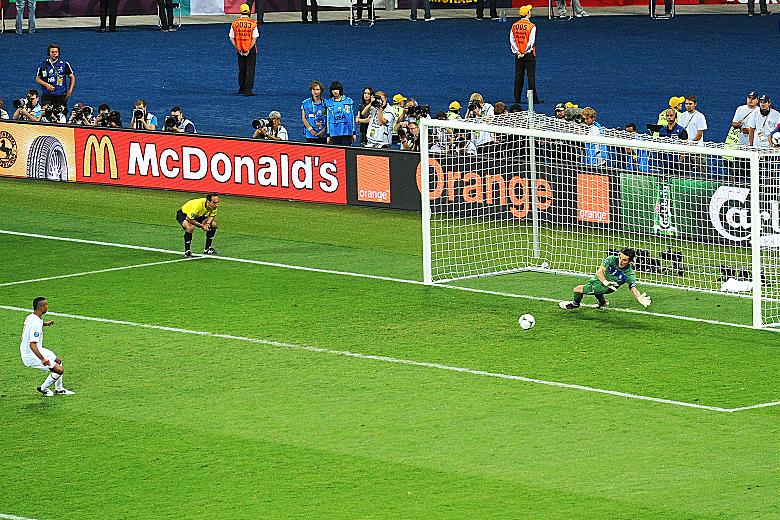 Okay, I’m sorry, I just can’t resist returning to soccer terms. If your colleagues or classmates start talking sports, this is the vocabulary you simply need to know!

Das Elfmeterschießen refers to both the tie-breaking, sudden-death rounds in tournaments as well as regulation-time penalty kicks. It literally means “11-meter shooting,” because that’s the distance to the goal when the player takes the shot.

If you don’t know when or why a player would take such a shot, you might need more of an intro to soccer than I can provide here. 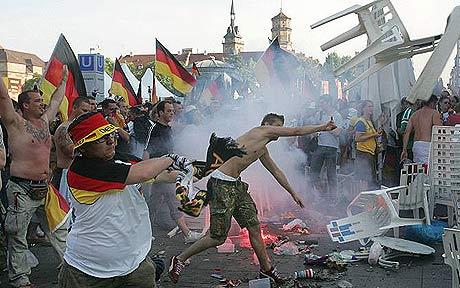 You can’t discuss Fußball without discussing the fandom. Certainly there are some less-than-savory elements in the stadium sometimes, but hooliganism isn’t a widespread problem in Germany. In my experience, people fear the traffic jams around stadiums far more than fan-related violence or crime. 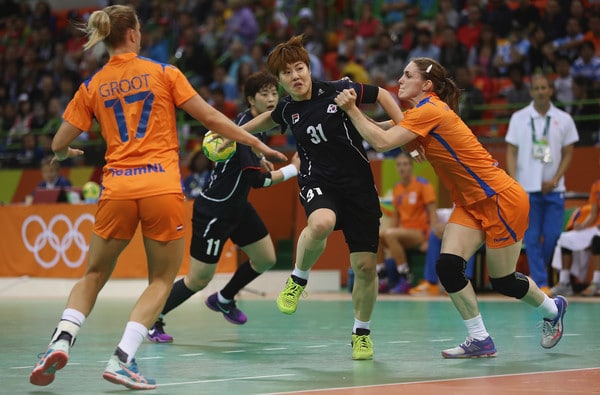 This post started with the low-hanging fruit of identical German-English cognates, and now I’ve buried two of them in the middle of my list (die Hooligans, der Handball).

Why am I bothering to tell you that handball is der Handball? For whatever reason, this sport is way more popular in Germany than in the English-speaking world. I’ve yet to meet anyone who’s passionate about watching or playing it, but it makes it onto the news fairly regularly. Be on the lookout for this if you take my advice and start watching “Tagesschau.” 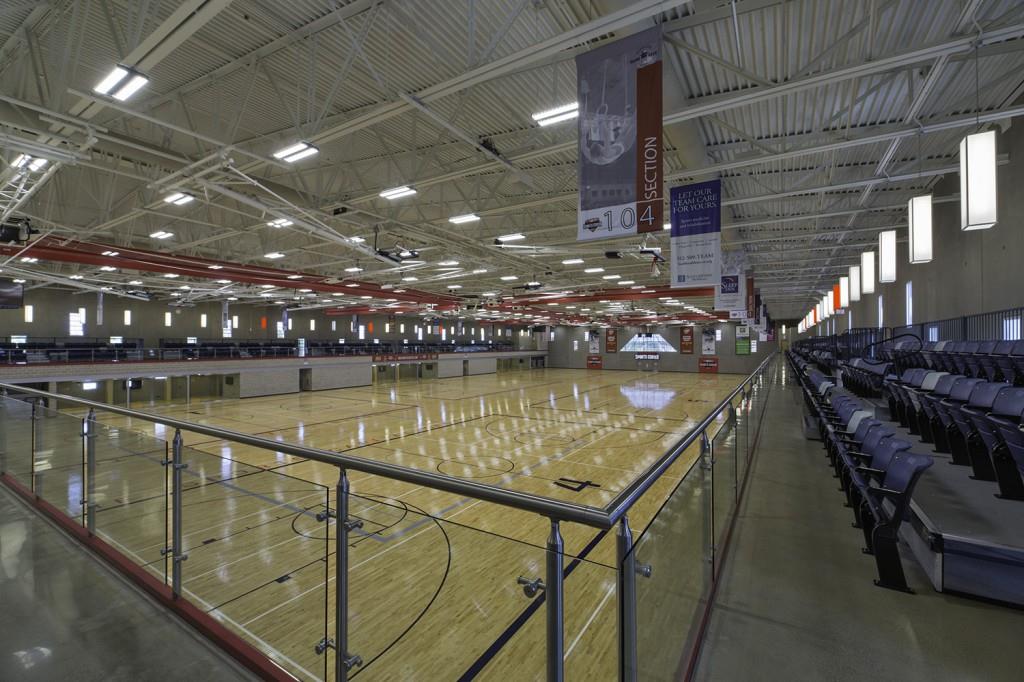 And now we’ve got a false cognate: the German word das Gymnasium doesn’t refer to the same thing as an English gymnasium. A German Gymnasium is a type of secondary school.

If you want to talk about the big building where people play volleyball and whatnot, the word you’re looking for is die Turnhalle or Sporthalle. 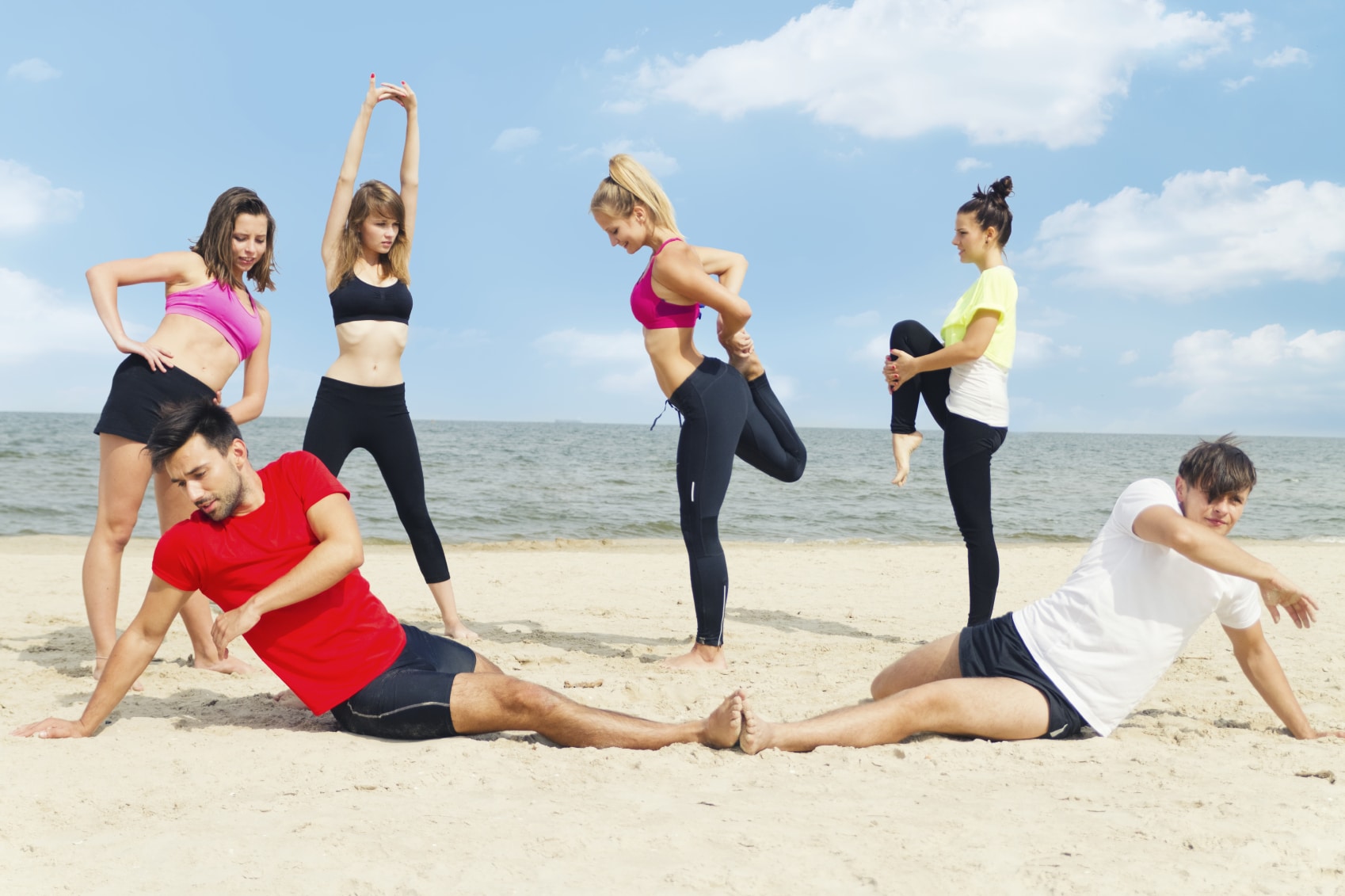 Any fitness activity can be referred to as Sport in German, even yoga or running on a treadmill. When your German conversation partner says she “does sports” (treibt Sport), she might not mean what you think.

It could be something that takes her to the Olympics one day, or it could be jazzercise.

13. Auf dem Turnier (At the Tournament) 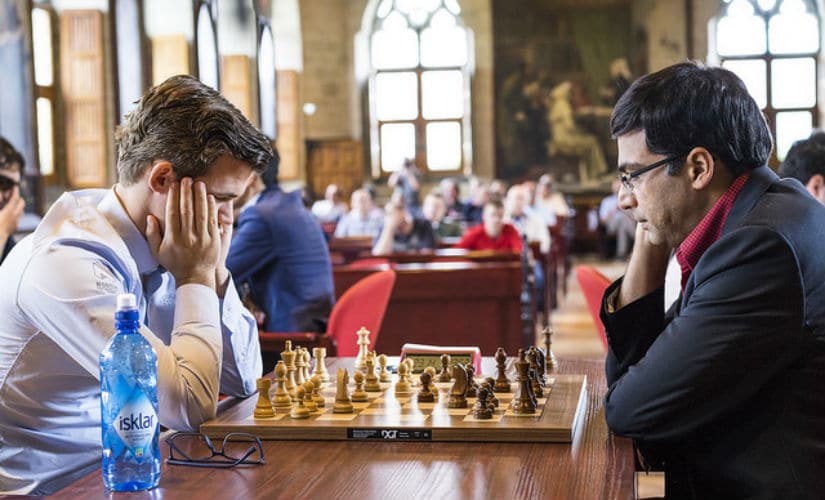 Mind your German prepositions. There’s no one-to-one translation of “at” in German, so in this instance you use the preposition that usually means “on.”

This is why your German friends might say things like “on the tournament” in English: it’s auf dem Turnier in German. For the same reason, they might say they’re “on the party,” “on the conference,” etc. Those are auf der Party and auf der Konferenz in their native language, respectively.

Notice, too, that auf takes the dative case here. That’s a very small distinction, but grammatically, it matters. 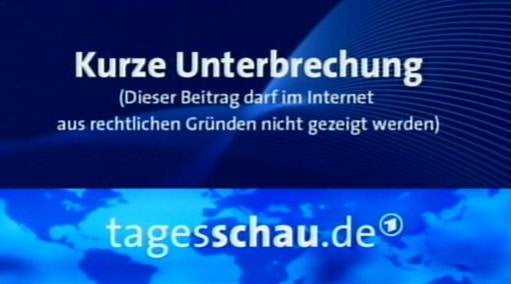 This last one might be a mouthful, but I promise it’s useful for a variety of reasons.

First of all, training with complete sentences can’t hurt. You don’t have to throw only single German words into your flashcards or vocabulary trainer. Practicing longer phrases tests your ability to compose sentences on the fly—or memorize them whole-cloth, if that’s your thing.

And look at all the skills this one sentence brings forth: Modal verbs! Adjective endings! Negation! Passive voice! It might be overwhelming for a beginner, but it’s something to aspire to as you become more advanced.

Finally, why this one monster sentence in particular? Because you’ll see it all the time if you watch German news online. Many sports leagues jealously guard their broadcast rights and won’t let the news re-show footage on the web. If you’re watching “Tagesschau” and the picture cuts out, don’t hit refresh or adjust your screen. It’s perfectly normal.

So there’s your 14 new words and phrases. Get to know them. Practice diligently with them. Expand your knowledge by watching more sports.

In time, you’ll be the Meister (champion) of German sports vocabulary!