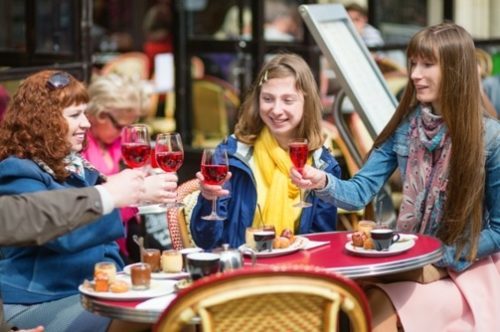 Ever seen a French movie about an American in France?

A bonjour, a bise, and suddenly they’re flying around sunny Paris on a moto-scooter, sharing baguettes and rosé wine.

They make it look much easier than it is.

The truth is that making friends in a foreign language is more difficult than meets the eye.

In large part, it’s because most of the sentences and phrases you learn as a beginner are not terribly useful when meeting new people.

It’s all well and good to be able to conjugate the verb avoir in the conditional, but what about asking someone to meet you for a drink?

With that in mind, here are a few of our favorite useful phrases for making—and keeping—friends in French.

Making friends is perhaps one of the most difficult things to do for someone with only a beginner or intermediate level of French. After all, what do you do with your friends most of the time? Talk! Here are some key phrases that can move you up in a new acquaintance’s esteem and show off your grasp of French.

This question has cultural and linguistic significance, and highlights a couple different elements of speaking on friendly terms to new acquaintances.

The first is the use of the subject pronoun on. Though during your French lessons you’ll learn that the first person plural conjugation is nous (we), in conversation, most people use on instead. It’s a little less formal and takes away that textbook edge your French can often have.

But more importantly, this question offers a bit of insight into that most French of traditions, la bise. La bise is the European tradition of kissing friends and family. In France, it’s fairly common to ask this question to propose la bise with new friends when saying goodbye for the first time.

La bise is usually only done between women or between a woman and a man in France, but occasionally two men who are very close may partake. The number of kisses varies depending on the region, but if you’re in Paris, two will suffice.

If you’re looking for something to do with one of your new friends, this is a good question to be able to ask: “Do you know somewhere around here where we can get a drink?”

Getting a drink with a new friend is a great opportunity to get to know one another and test acquired vocabulary. Know that the French don’t really buy “rounds” the same way that people in the States or the UK do (there will usually be table service, and the bill will be split at the end).

Here are a few extra phrases to help you once you get to the bar:

You can also use Tu connais un coin… for other activities:

If you or your new friend don’t have time to grab a drink right away, you can make some plans for an upcoming day. This sentence literally translates as, “Shall we find one another one of these four?” “Four,” in this case, refers to days, and this expression is about finding a day in the upcoming days (though not necessarily in the next four…) when you can meet up and do something.

Of course, finding something to do is another subject altogether.

Hanging Out in French

Once you have some friends with whom you can speak French, it’s time to plan some activities. Here are a few sentences to get you started.

This is perhaps the most common activity in which to partake amongst new friends. Apéro is the period between the end of work and dinner where you can get an apéritif, or pre-dinner drink. In the countryside, you’ll often have apéro at someone’s house, whereas in the city, this is more frequently done in a bar.

Because apéro comes before dinner, it’s not an excuse to get drunk. It usually lasts about an hour, over the course of which you’ll have a drink or two and some snacks. In bars, this is often complimentary peanuts or chips, but at home, people can go for all sorts of different things!

An off-the-cuff apéro will usually be a few packaged snacks that are known as gâteaux apéro (literally apéro “cakes”), but they’re closer to chips and puffed cheese snacks than any cake you’ve ever seen. Depending on how culinarily inclined your host is, you may be served slices of saucisson sec (dry sausage) and olives, a savory cake, rolled ham with herbed cheese, or they may even break out the fancy verrine glasses (used for serving small dishes rather than drinks).

When you’re at apéro, there are a few key sentences you may need; this is one of them, especially if you need a bit of lubrication to get the conversation going.

Pas plus haut que le bord means “No higher than the rim” and is a joking way of asking for your drink to be filled. Instead of stopping the person serving at the halfway point, you ask them to stop pouring at the rim. This is a great example of the way that the French use irony in day-to-day life, and you’re sure to impress your friends at apéro with this!

If you want to express your contentment with your current situation, this is a key sentence to use. On est bien, là means “We’re good right here.” Maybe not a sentence you find yourself using often in English, but sentences expressing excitement and anticipation won’t serve you much in French.

Culturally, looking forward is far less common in France than looking at—and appreciating—the present. So if you’re enjoying yourself, say so! Your new friends will appreciate the sentiment.

And When You’ve Had Enough…

Here are some key phrases for when you’re done hanging out wherever you are (or need to say “no thanks!”).

This sentence is a very slangy way of saying, “Should we get out of here?” It’s definitely not one to be used in formal company, but if you’re starting to feel fairly comfortable with your new friends, this could be a fun one to pull out.

It can either mean, “Shall we all head home?” or “Should we find a new bar?” Let it be open to interpretation!

You’ve heard of ennui, but have you heard of flemme? This French word indicates severe, almost crippling laziness. When you say, Trop la flemme, it means that you’re far too lazy to complete the activity that has just been suggested.

Luckily, there’s a whole day devoted to being lazy in France. Which brings us to…

Sundays are a special day in France, dedicated to doing nothing. That being said, some people like to do nothing together, and you may have offers to visit museums, go for walks or even get apéro with your French friends on Sundays.

While you might say yes, sometimes it’s nice to just sit at home and be a pantouflard, literally someone who wears slippers, but in reality a word that refers to a homebody.

If after a week of socializing with your new French friends, all you can think of is enjoying your home (and your slippers), let them know with this phrase!

Making new friends in a foreign language is never easy, but armed with a few fun expressions, you’ll soon be well on your way.