5 Funny Sayings for Cooking Up a Lively French Conversation

“Well, you know how he is, he doesn’t chain the dog with sausages.”

The French regularly insert creative, bizarre and hilarious sayings into their everyday conversation.

When I first moved to France, I realized how many sayings I didn’t know.

As I began to learn the language more intimately, one of my greatest pleasures was mastering some of the unique expressions the French use.

Some are similar enough to English to catch the drift.

By the way, when you’re not chaining your dog with sausages, it means you’re a tightwad, because it would get expensive to continuously replace your dog’s leash as he eats it.

This doesn’t have a direct translation in English, but the word “patachon” was used in the 18th century to refer to someone who drove a boat that transported goods, and at every city stopped to have a drink.

Today, it can be used to mean “You’re taking advantage of Paris nightlife!”

So how do you put these hilarious phrases to good use? And where do you begin?

Different Ways You Can Put Funny French Sayings to Use

To express an idea

Just as we paint pictures with words in English, the French play with their own language to portray an idea that may be difficult to express otherwise. These kinds of sayings often come from the things we see in daily life and emerge as metaphors or similes in poetry, which eventually turn into common sayings. Oftentimes, the best way to express an idea or make a point is to paint a visual picture with words, and oftentimes, the results are hilarious.

To make others laugh

Obviously, French sayings can be hysterical, so they can sometimes be used solely to elicit a laugh. Knowing some sayings that will do this will probably be helpful to relax you—especially if you’re still not totally comfortable having conversations in French. It only takes a laugh or two for you to begin feeling like speaking French is natural.

To liven up a conversation

Especially when you’re first starting out, you can feel as if your vocabulary is not quite wide enough. Knowing a few amusing and creative sayings can help liven up a conversation beyond simple, everyday vocabulary, and could even motivate you to continue building up your knowledge of both sayings and creative ways to speak.

5 Funny Sayings for Cooking Up a Lively French Conversation

Here are some commonly used funny sayings that you can start infusing into your vocabulary. 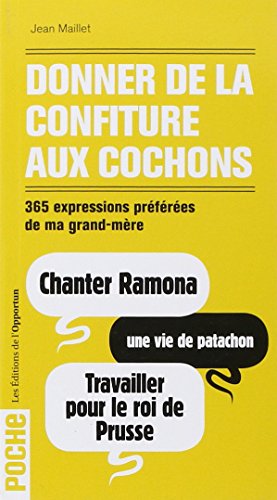 For online research, Expressio.fr not only contains a database of French expressions, it gives a history lesson on where they came from and an explanation on how to use them.

This may be one of the most common ways to say “I’m starving” in French. Its origins come from a phrase, “se rincer la dalle,” that formerly meant “to drink a lot of alcohol.” “La dalle” is defined today as a slab of rock, and “crever” is a verb that means “to burst or puncture.”

So, literally, the phrase translates to “bursting the rock,” which of course makes no sense in relation to being hungry and instead paints a ridiculous picture. But it’s a common phrase to communicate that you need food—and you need it now!

English equivalent: “I’m so hungry I could eat a horse!”

The picture this paints is clear: “to not go at it with the back of the spoon.” If you’ve ever accidentally tried to eat soup with your spoon upside down, you know that it will probably take longer to finish up your bowl than the person next to you, who is using their spoon correctly.

The French use the imagery in this saying, which comes from the 19th century, to communicate that someone does something without using caution, oftentimes while they are acting rudely. It means to act bluntly and deliberately. This applies for the way people may act or the way they may communicate.

English equivalents: To make no bones about something, to not pull any punches, to not sugarcoat it

“Elle était très franche…elle n’y va pas avec le dos de la cuillère !”
(“It was very honest…it doesn’t go at it with the back of the spoon!”)

This saying translates literally to “to give jam to the pigs,” and is used to refer to giving something to someone who inevitably wouldn’t appreciate it, just as pigs don’t appreciate the homemade jam you so kindly treated them with.

The saying actually derives from an idea Jesus mentioned in the Bible: “to not throw your pearls before swine.” Over time, the expression kept “pigs,” but changed from “pearls” to “jam,” maybe because it’s both easier to digest and less expensive! Proverb turned idiom, it is now used to express an action that isn’t worth your time.

A hilarious saying that is used rather often in France, translated literally to “dogs do not make cats” in English, this expression is used to express how families are often similar to each other, since, of course, it’s impossible for a dog to give birth to a cat. For example, when you begin to develop the habits your mother has that used to bother you so much as a child, your boyfriend might laugh and say, “Les chiens ne font pas des chats.”

English equivalent: “The apple doesn’t fall far from the tree.”

The word “guilledou” has one place in French, and one place only—in this expression. The phrase means to pursue new adventures, preferably adventures with a lot of shenanigans and women. It originates from the 16th century, when the Académie française deemed it as meaning “to sneak off in the night to places full of debauchery.”

“Courir” means “to run,” and “le guilledou” originates from the verb “guiller,” meaning “to trick or deceive.” What makes it funny? “Le guilledou” is out of commission in the French language, only possessing meaning in the context of this phrase!

English equivalent: To chase skirts, to womanize, to philander

Sprinkling sayings like these into French conversations can make you feel more natural and at ease.

The more you add, the more seasoned of a speaker you’ll be!