You’ve watched your share of French movies, soaking up as much language as possible.

Even reading entire books in French is a feat you’ve accomplished!

You’ve done them all, and quite frankly it can be exhausting.

So I say it’s time for you to sit back, relax and enjoy something inherently fun—because your next source of French education is right there in your gaming console…or trusty set of dice.

Whether it’s rejoicing in the familiarity of a childhood game or lapping up the knowledge of a new one, these eight rainy day activities are sure to have you winning at French!

Why Play Games to Perfect Your French?

Cast your mind back to preschool when comprehending simple addition seemed as difficult as French conjugation does now. You could either sit there and rote learn your way to success (woo hoo!) or you could take charge in your family’s weekly Monopoly challenge and conquer both your relatives and arithmetic at the same time!

This method of learning applies to you today as well. Playing fun games to improve your French skills effectively engages, imparts knowledge and allows for practice, while making your language lesson more about giggles and less about hand cramps!

For rookies, taking advantage of a familiar game written in the French version is a sure-fire way to kick off your language learning. The benefit of expectation allows your brain to connect the linguistic dots and realize that “Allez en Prison” is simply and devastatingly, “Go to Jail.” By discerning the language for yourself, you are more likely to remember what you have learned, as you have the connection to successfully deducing it tout seul (all alone).

Speak to many youngsters who hold English as their second language and a great deal will reveal that their knowledge and practice came from the online gaming realm. Finally a legitimate reason to perch yourself in front of a screen for 6+ hours and scream obscenities to online rivals across the globe! Logging in to your favorite web-based multi-player game through a French server will have you competing and conversing with the likes of PierreParis44 or CroissantAssassin123 in no time.

Then of course, the next logical step would be to try out games that are typically French. By dabbling in archetypical French boardgames, card games, online games…whatever, you are immersing yourself not only in the language but the culture.

Entertaining learning strategies allow you to appreciate the humor, notion of childhood and other aspects of French life that you would otherwise miss out on as a foreigner. Believe us, there are a load of classic French games that you would never know existed—and much like their comedies—might take some getting used to!

What makes many games vital learning tools for a language enthusiast and learning in general is that they engage the student and detach the thought of learning from feelings of boredom or pain—unless you just landed on Mayfair with four houses in Monopoly, then the pain is all too real!

The fact that games are usually enjoyed with others is also an advantage, as studying with friends can make the process all the more effective. However, having the means to do so can sometimes prove contradictory to your very earnest intentions.

It’s a clever idea to turn your usual procrastination activities into your usual learning activities, so dig out the jokers from the pack and set yourselves down for a night of family fun…or gaming profanity!

Okay, so you are sensing a current theme here, but we swear this is a great game for French fluency—and potential emotional devastation. The best part for language learners undoubtedly comes from the very detailed Monopoly“chance“ cards that every player encounters throughout the game. This forces you to improve your reading skills and overall vocabulary through either individual deducing or conferring with your opponents or computer.

Other advantages hark back to you as a five-year-old banker practicing novice mathematics, yet this time you are doing so in French: “mille euros Monopoly pour moi s’il vous plaît!” (One thousand monopoly euros for me please!)

For those who are keen on French geography, prepare to have your eyes on ‘”Gare de Nord,” “Montparnasse,” “Gare de Lyon” and ‘”Saint Lazare”—because we all know the train stations win the game.

This is a card game that hasn’t been super popular in France, but a goodie nonetheless if you are in need of some basic numerical reinforcement or practice with basic question asking. A small amount of people begin with three or so playing cards each, and the aim is to have the most pairs by the end of the game. To accrue these pairs more often than not you will have to ask another player if they have the card you are seeking.

Need to swipe a two off your opponent? Simply express yourself comme ça (like this):

Just a heads-up, although not necessary for “Go Fish,” the names of card suits are sometimes a little different in translation to our clubs, diamonds, spades and hearts.

You will also find the highly sought after Jack, Queen and King amiss in a typical French deck as well.

Jack – Valet (Valet is sort of an equivalent to a knave)

This is a fabulous game for rehearsing your speaking skills through the construction and comprehension of questions. It’s also easy to specialize in this game and tailor the potential vocabulary to your recent topic of focus. Been working tirelessly on French sporting culture? Turn your opponent into Thierry Henry or Mary Pierce. Of course you aren’t limited to celebrities or French people for that matter, but hey, where’s the cultural education in that?!

So to play, in pairs or in a larger group you assign each other certain aliases (celebrity or otherwise) and then race to correctly guess your given character through clever and definitive question asking. For example:

This can be a game to practice with your French buddies, fellow language learners or even a nice ice breaker on a tandem language exchange! 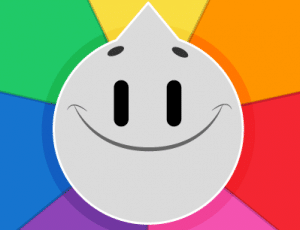 Trivia Crack is a swish and totally addictive phone app that not only exercises your French comprehension, but tests your brain in general knowledge. Win win?

Similar to your grandma’s beloved, “Trivial Pursuit,” you compete against friends or random opponents by answering genre-specific questions. The real prize however is in the language option provided at the beginning, allowing you to blossom into a French language trivia buff before you can say “nouvelle partie” (new game).

Disclaimer: Did we mention this game is addictive? They don’t call it “Trivia CRACK” for nothing!

This is a classic French card game that basically every person from the Hexagon has played at least once in their life. The aim of the game is a simple one, to win the race. There are a variety of hazard, remedy, safety and distance cards that implicate players throughout the game and ultimately provide for a winner. Although simple in nature, it is useful for learning vocabulary pertaining to cars and roads, plus the added benefit of large number practice, which can always be a hurdle at the beginning!

Want to sound like a real pro? Challenge your opponents to another game the French way by saying, “On fait la revanche?”

This literally translates to “We do the revenge?” and can be used in reference to nearly any game, including a tennis match!

If you are going for best out of three, don’t be afraid to propose, “On fait la belle?” (We do the beauty?), which should only be said when seeking a third round.

Here’s another classic French card/board game that uses an allocated point system to a normal deck of cards, plus tokens and a specific board to play on. It’s ideal for three to eight players, and involves half luck and half genuine strategy—a bit of a gambling game if you ask us!

The benefits lean more toward the cultural significance, but also as per most card games, it encourages number practice, and for the daring you could impose a strict French-only vocabulary.

Oh the hours spent as a child enjoying the character stylings of Peach, Toad and Luigi! Turning your hand at video games in a foreign language is a bit more tricky than your average board game, as often you have a time limit in which to do something or make a decision.

“Mario Party” will always be a household favorite for those kids of the ’90s and naughties, and has a nice balance of text and play to ensure that you both learn and enjoy yourself—only on Nintendo 64 versions mind you. Keep it original!

Video games have the advantage of being more interactive than board games when playing solo on those cold and lonely French learning nights!

Calling all war chiefs, lords and nerds to get your hands on a French version of “World of Warcraft.” Unlike other multi-player online games, such as “Counterstrike” or later versions of “Call of Duty,” whereby you can choose which country’s server you would like to connect to and thus play in that country so to speak, “WoW” makes it a little more difficult in that you need to purchase the French or basic European version of “WoW” in order to access the French servers and thus play with locals.

What makes this game more useful than say, “Counterstrike” or other games of this nature, is that there is a large community spirit that provokes a lot of conversation both verbally through a headset and written through your keyboard.

As mentioned before, these types of multi-player games have proven to be super beneficial in the learning of languages, as you are in a mock reality whereby the conversation is realistic, yet you lose the timidness you might otherwise have conversing face to face with a native.

Where Can I Find Other Games in French?

Sourcing your favorite game in the French version might seem like a confusing task at first, but hallelujah for online shopping and Amazon! A simple google search should usually suffice, but try these bad boys:

There are also a few options within many gaming stores in capital cities which either stock or can order the French versions of games, so check that out to avoid any nasty shipping fees.

These are just a few games to get you on a roll, the possibilities are almost endless when it comes to playing games in French!