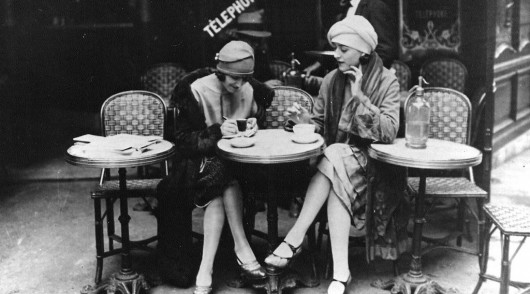 By Alan and Kelli

As a French learner, which would you rather hear?

“Your French is so good!”

“You sound so French!”

If you’re like most people, I’m guessing that it’s the latter.

To help you get there, we’ve racked our brains and put together a list of 20 informal, everyday French phrases and expressions.

Once you master these, you’ll sound much more laid back and playful.

We can’t guarantee that they’ll get you a date, but we bet it can’t hurt!

And even if you’re not looking for a date, we hope that these casual French phrases and expressions come in handy in everyday French life as you stroll with your friends along the sweeping boulevards of Paris.

Not able to simply hop on over to Paris? If you’re far away from France, or would simply prefer to learn French phrases at home in your pajamas, we’ve got you covered with awesome authentic resources.

FluentU’s great collection of French language videos will familiarize you with common French phrases and expressions in no time. Our French library has all kinds of goodies for French language learners: cartoons, music videos, interviews, YouTube videos, educational clips and more.

Each video is subtitled so that you can follow along without any hangups. Didn’t understand that last word? Simply hover your cursor over the subtitles to see each word’s definition, right there on your screen. FluentU even keeps track of your progress through videos and lets you make a running list of new vocabulary words.

With that in mind, let’s get to learning all the common French phrases you’ll need to navigate Parisian life and watch native French videos!

Ça roule is a very colloquial statement, meaning that everything’s great and life’s going well. Therefore, in the form of a question, it simply means “How’s life? Good?” Otherwise, the more standard question used to express this same idea is Ça va?, literally meaning “Is it going?”

The response to this question is merely an abbreviation of the phrase comme d’habitude, meaning “as usual.” A common expression, comme d’hab can be used in place of the standard comme d’habitude in virtually any informal setting.

For all those who tend to have a dissenting opinion, this casual French phrase is a must. It simply means “whatever,” and is commonly used in French when someone is exasperated and wishes to openly display their disagreement in a simple, informal way. For example:

Similarly, in some other contexts, n’importe quoi can mean “anything,” like in this example:

J’aurais donné tout et n’importe quoi ! (I would have given anything and everything!)

Notice that this informal French phrase is similar to #2, however there is a slight nuance in the meaning of this particular expression. It still portrays the idea of exasperation, but this phrase means “That’s nonsense!”

This is a useful French phrase, meaning “just forget it,” or “never mind that.” It literally means “drop it,” but doesn’t have quite the same snappy tone behind it as “just drop it!” does in English. Although…it very well can with a spiteful enough tone…

Et alors? Est-ce que tu as eu ton augmentation de salaire ? (So? Did you get your raise?)

Meaning “You up for it?,” this casual French expression is great for suggesting outings with friends or restaurant choices.  It can also mean “Sound good?” So, whenever you get a marvelous idea for a Saturday afternoon or evening, tack this on at the end as a way of politely asking your friends if they’re interested. Use the latter when addressing several friends, and the first when hanging out with just one.

“Keep me up to date!” This is the perfect French phrase to use as you’re waiting to see how things play out in a friend’s life. Perhaps they just started a new job, or moved to a new city, and you want to know how things are evolving. End your emails or conversations with this little phrase to ensure you get those little updates!

Also, inversely, the response to this would be “Ouais, t’inquiète pas, je te tiens au courant.” (Yeah, don’t worry, I’ll keep you up to date.)

This phrase means “for whatever reason”/”God knows why”/ “your guess is as good as mine!”

This is a useful little French phrase that perfectly expresses one’s befuddled state of mind. Notice that it can be used for both the formal and informal version of the word “you,” the first being formal or speaking to several people, and the latter informal and to one person.

Bref is only ever used to summarize something or to give one’s final impression of something after a lengthy story has been told, and it’s an easy little word to recall, due to that the English equivalent is almost the same: in brief. Other synonyms would be “all in all” or “in short.”

(She called me yesterday and told me that she didn’t have the same feelings for me, and that in the end, she wants to remain friends. In short, she dumped me.)

This casual French phrase is used so commonly in casual settings that it’s almost impossible to have a conversation with friends without hearing it. It simply means “Ya know?” and is oftentimes tacked onto the end of a sentence to emphasize whatever the speaker is saying.

“Yeah, well…” would be the English equivalent to this bunching of words. Like English, French has its share of filler words, and enfin is commonly used as such, to a certain degree. Meaning “well,” it’s slightly more refined than “eeuuuh” (uhhhh), but still, in many cases, doesn’t necessarily change the meaning of the sentence.

“Oh C’mon!” This interjection is the best way to communicate impatience with someone. Trying to get out the door but your friend is holding you up, dillydallying with their iPhone? Let out a little, exasperated allez! to get your point across. Note that this is technically the formal conjugation of the verb “to go” (aller) but in such a context, even when talking with just one friend, you would use it in this form, due to the fact that it also means “Let’s go!” (Note that it is common to hear this word in the bleachers of a sports event: C’mon! Let’s go! Allez, allez !)

These are all lovely little French phrases to use to say “that sucks!” or “that’s stupid!” or “that’s terrible!” The general implication is that whatever is being discussed is either a total bore or totally ridiculous.

Meaning “I’m feeling a little down” or “I’m feeling blue,” this is an informal way of expressing your sadness. It literally means, “I have the cockroach,” but to use the verb phrase avoir le cafard simply means to be depressed or to feel down.  You can also say Ça me donne le cafard, which means “that depresses me.”

“It’ll take your mind off things…” Use this French phrase when consoling a friend who’s down. Offer to go with him/her to a movie or  to a café to grab a cappuccino. Make your proposition, then use this argument to get them out of their funk.

(‘C’mon! You can’t stay cooped up in your room! Come with me to the movie theater! That’ll take your mind off things!)

This little gem actually derives from French literature, from a tale called la Farce du Maître Pathelin, written by Rabelais in the 15th century. Obviously, this little phrase was catchy enough to stick, because it’s still used today! Next time your friend starts rambling about something entirely unrelated, toss out this little phrase, and wow him or her with both your excellent knowledge of French vernacular and literature!

“I can’t believe my eyes!” This is a perfect informal French phrase to let loose when you’re pleasantly surprised or dumbfounded by something you are witnessing. The translation is more or less literal on this expression, and you can do no wrong in using it when dazzled or surprised!

This is a common French phrase to use while observing a friend who appears to be having difficulty doing something. It’s the equivalent of asking “Doing okay there? You managing there?”

Tu t’en sors? (You managing there?)

“I’d bet my life on it!” is the English equivalent of this one. The French version is a bit more colorful, literally meaning “I’d put my hand in the fire!” It simply expresses that you are certain of something, and is usually used as a statement to try and convince others that you are right about something. Believe it or not, this little phrase also originates from the Middle Ages.

“You can’t just group it all into the same category!” This is your go-to casual French expression for when one of your friends is generalizing, and it literally means, “you can’t put everything in the same bag!” If you find yourself with a friend who does like to lump everything together, then remind him or her of this with this simple phrase.

The phrase “Watcha doin’?” would be the best way to portray the laid-back style of this French phrase. Without knowing that it is informal, it can look like a strange sentence, literally meaning “You’re doing what?” Yet it commonly replaces “Qu’est-ce que tu fais?” or “Que fais-tu?” in day-to-day situations. It is highly informal, and not recommended that you use it with anyone other than family or close friends.

If you want to learn French the way that people actually speak it, then you won’t want to miss FluentU. FluentU takes music videos, commercials, news, and inspiring talks and turns them into French learning experiences. FluentU lets you learn real French – the same way that people speak it in real life. FluentU has a diverse range of great videos like movie trailers, funny commercials, and web series:

FluentU brings French videos within reach with interactive captions. Tap on any word to see an image, definition, and useful examples.

Tap on the word “suit,” for example, and this is what appears:

And FluentU’s “learn mode” lets you learn all the vocabulary in any video with questions. Swipe left or right to see more examples for the word you’re learning.

FluentU always keeps track of vocabulary that you’re learning. And it uses that vocab to recommend examples and videos so that you get a 100% personalized experience. Start using FluentU on the website with your computer or tablet or, better yet, download the FluentU app from the iTunes or Google Play stores.

Trankillement! Learn French with Songs That French People Actually Listen To
15 French Idioms You Should Know But Don’t