10 Fun and Fabulous Ways to Brush Up on Your French

When I lived in France, I spoke French so well that sometimes natives thought I was one of them.

Then I moved back to the States and within a year, it was like I’d never lived abroad.

I didn’t have the time or resources to take French classes again, so instead, I gave myself these manageable and fun French challenges.

They’re all easy, and if you do them regularly, you’ll be back in the game in no time!

I’m not the only one checking Twitter notifications and new tweets 24/7… right? Twitter is an awesome way to keep up with interesting people worldwide, including those who tweet in French. Instead of limiting your timeline to your friends and favorite celebrities, expand your Twitterverse with some prolific French Twitter accounts.

Here are a few to get you started:

2. Keep a Tally of How Often You Hear French Words in American Pop Culture

Watching “Star Trek: The Next Generation” as an adult who speaks French is hilarious. Why? Because Captain Picard frequently swears in French. It’s supposed to be a family-friendly show, but I guess the occasional French swear word is okay.

Popular songs like “Lady Marmalade” and “Bad Romance” include French lyrics—try translating them for your friends.

American movies set in Paris often include French dialogue, sometimes without subtitles. Watching these with your non-francophone friends will help you feel awesome about your French skills as you explain what they’re missing. I’m particularly fond of “An American in Paris” and “Chocolat.”

The next time you binge-watch “Friends” on Netflix, pay attention for the episodes in which Phoebe speaks French, including the one where she tries to teach Joey French. They’re hilarious!

Is this all easier than actually watching a movie or listening to a song in French? Yes, but it will build your confidence! French is French, after all!

After that, the next step might be to enjoy some real French media (made by and for native speakers). French films are a popular choice, but even just watching French movie trailers on YouTube can get you some quick French listening practice.

Or you could use FluentU—it’s a language learning app that’s all about learning French via real French media. The videos all have interactive captions that let you look up words as you go, as well as flashcards and personalized quizzes to reinforce newly-learned French vocabulary.

Video content, whether it’s web videos or a Netflix movie, are particularly helpful for keeping you interested and motivated while reviewing French.

3. Mutter Under Your Breath in French

Do people ever annoy you? Make you really angry? Sometimes you just want to yell mean things at them, right?

Well, I have a better idea, and it will help you brush up on French.

Start muttering under your breath in French. Swear quietly in French. Say simple but accurate statements like “Tu es bête“ (You are stupid) or “Je te déteste“ (I hate you).

On the off-chance that you mutter too loudly, the other person will have no idea you just muttered an insult! Smile broadly and say you’re brushing up on French.

(Obviously, this still has the potential to go very wrong, so use common sense and play it safe!)

You’ll let off steam while practicing your French language skills at the same time. Win-win!

4. Play Your Own French Version of Balderdash

My friends and I used to play a simplified version of this with only a French-English dictionary. Each person takes turns randomly choosing a word from the dictionary. The other players then guess what it means, in French.

Citadelles (Citadels) is a card game combining strategy and luck. 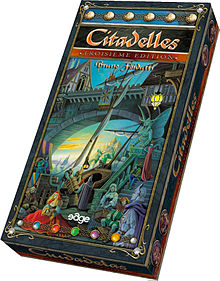 While there is an English-language version, the original card game debuted in French. I have played this with my non-francophone friends, and I definitely felt better about my French skills after the game. During the first round, I helped everyone translate their cards. You too will feel more confident in French after correctly figuring out French characters like Voleur (thief) and Condottière (warlord).

To play, you definitely need to read through the included instructions, possibly a few times. In a nutshell, though, each round you take on the role of a different medieval character with strengths and weaknesses. With the cards you collect, you attempt to earn money and build a city.

You can buy the original French version from L’Alchimiste.

If you’ve never played Taboo before, the object of the game is to get your teammates to guess a certain word without saying common word associations.

So if your card says fleur (flower), the “taboo” words might be rose, violette (violet) or plante (plant).

Taboo is available online in French, and I promise it’s a lot of fun. I played it while studying abroad in France. My language skills were far from awesome at the time, but Taboo helped me learn to describe a word even if I didn’t know that word in French.

7. Pretend You Don’t Speak English at a Popular Tourist Destination

What’s really cool about America (and many other places in the English-speaking world) is that people from all over like to visit. Major tourist attractions will often have brochures in multiple languages. Some museums even have laminated fact sheets for each gallery in several different languages.

Next time you go to a popular tourist destination, like Disney World or The Smithsonian, pretend you only speak French.

Ignore the signs in English. Choose the audio guides or brochures in French. If there are only English descriptions, try translating them out loud. If you’re with other francophones, speak French together.

Be nice to the people who work there, and speak English with them. They probably aren’t trying to brush up on French.

8. Teach Your Significant Other French

Who hasn’t dreamed of a beautiful French man or woman whispering sweet nothings in your ear?

If you ended up with an American like I did, you can still teach your significant other French.

That is, you can still try to teach your significant other a few key phrases in French. If nothing else, get him or her to master the following:

If nothing else, you’ll get great practice out of saying French words or phrases over and over and over again. Plus, you’ll feel way better about your own accent every time your significant other attempts to speak in French!

9. Start Your Own Blog in French

You don’t need to be an expert in French grammar to have a blog in French. Choose a topic you like, and write about it in French.

You could use a blog to keep track of your progress in French or write about French-related topics. Or, you could just blog about whatever you normally would, but in French!

The continual practice of thinking in French, writing in French and looking things up in French will definitely improve your language skills. Occasionally finding yourself in the position of translating English into French won’t hurt, either!

10. Speak French in the Shower

Feel a little awkward about your spoken French?

Just like singing in the shower can make the most tone-deaf singer sound amazing, speaking French in the shower will bolster your confidence in speaking the language.

The acoustics will make your accent sound different. You’ll feel less self-conscious about it. Plus, no one else is there to hear you make mistakes!

Your shower is a judgement-free zone.

Try any of these easy and offbeat ways to brush up on French.

In no time, you’ll be bien dans ta peau (content with yourself)!

Brita Long is a freelance writer and copywriter who dreams of returning to Paris, her first love. Tweet at her (@belle_brita) in French or read her other musings on life at bellebrita.com.