Argot (slang) is part of the lingo of Monsieur Tout-le-monde (the Average Joe).

Nowadays, it’s not uncommon to learn early on when studying French that “police” is policier in “correct” French, but flic in argot.

Verlan, which is taken from l’envers (meaning “reverse”) and entails switching up the syllables of words, is a bit trickier, but totally manageable (and pretty fun) once you get the hang of it.

Once your ears are attuned to verlan and other types of everyday speech, however, taking your French to the next level requires practice with real dialogue.

There’s no better way to do this than with French movies, but more specifically with French cult classics.

Hopefully, this already sounds intriguing, but let’s explore the reasons behind it before diving in.

So why cult classics (and not just “classic” classics), you ask?

Well, while classic films in any language, like “La Belle et La Bête” (Beauty and the Beast) and “The Wizard of Oz,” tend to touch upon universal themes, cult classics are often chock-full of culturally-specific references and therefore tend to have a more localized (and often highly devoted) fan-base. They are full of double sens (double meanings) and jeux de mots (wordplay). You know—rhyming, alliteration and all that jazz you learned in English class.

In the Anglophone world, films like “Monty Python and the Holy Grail” and “Pulp Fiction” have acquired cult status. We all have that person in our lives who endlessly references “The Princess Bride” (and has memorized every line of dialogue). You know (or maybe are) the type. So let’s take this phenomenon and look at how to turn it to your advantage in learning French.

1. Turn off the subtitles. When films have a lot of cultural references or make heavy use of specific dialects, the subtitles tend to be rather general and the nuance of the dialogue tends to get lost. If you turn off the subtitles altogether, instead of reading the film, you’ll be able to listen more closely to not only what is said but also how it’s said.

2. Do your dictées (dictations) and translate. Take a 30-second passage from a film and transcribe it. After you’ve finished the dictée, translate the passage into equally conversational English.

3. Mix in conversational practice with FluentU. To fill in those times when you don’t feel like watching an entire film, and to keep exercising all your French vocab bases, give FluentU’s advanced videos a whirl.

These digestible clips make authentic French conversations more accessible, helping you practice whenever you need it. You can learn about the program’s features in their entirety by signing up for a free trial.

4. Take note. Make flashcards with the unfamiliar words and expressions you come across. As an advanced learner, why not make French-French cards? Taking an example from above, you’d put policier on one side of the card and flic on the other. When reviewing the cards, come up with an example sentence and say it aloud.

5. Get fancy. After you’ve worked out the meaning of a line of dialogue, try converting it to the French registre soutenu (the formal register).

To get you started, I’ve picked out three awesome French cult classics and will show you répliques (lines of dialogue) from each below. Just be aware that, as with some English-language cult classics, these may tend toward the less-PC and include more “adult” subject matter such as violence, racism, etc.

So are you ready to get serious about learning with advanced French dialogue? Here we go! 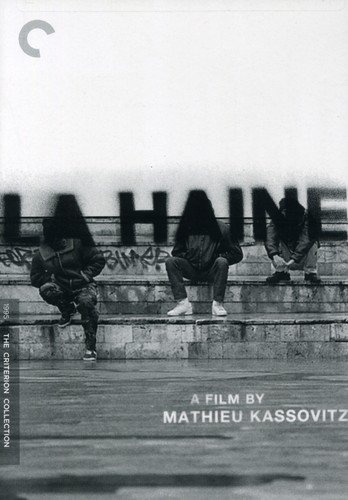 As a warm up, let’s start with the 1995 film “La Haine,” directed by Mathieu Kassovitz, that has a cult following in and out of France.

“La Haine,” which has a gritty, black-and-white aesthetic, depicts racial tensions in France. The film is set in the Muguets housing project in Chanteloup-les-Vignes, a banlieue parisienne (Parisian suburb).

The temperamental Vinz wants nothing more than to avenge the violence that Abdel experienced. Hubert, on the other hand, who’s waiting for the day he can get out of the projects, wants to lay low and not provoke the police. Saïd, caught in the middle, takes up the role of peacekeeper.

In terms of the film’s dialogue, not only is it rather fast, but it’s heavy on argot and verlan, making it great for picking up new vocab.

Despite the heaviness of the subject matter, the extremely poignant “La Haine” also has several touching, funny moments, which provide comic relief.

Here’s an exchange that takes place between Vinz and Saïd (starting at around 43:37):

Normally, the verb fumer means “to smoke,” and since “La Haine” is about the aftermath of a riot, it wouldn’t be completely tiré par les cheveux (a stretch) to think that Vinz is literally talking about setting a cop on fire. However, fumer in this argotique (slangy) context means to faire du mal (to hurt), perhaps with an arme à feu (firearm). Get it? Keuf is verlan of flic, meaning cop.

Vinz: Bah ouais qu’est c’tu crois, tu veux être le prochain rebeu à te faire fumer dans un commissariat ?
“Well, yeah, what do you expect, do you want to be the next Arab to get killed in a police station?”

Okay, let’s take a look at the first half of Vinz’s response to Saïd: Tu veux être le prochain rebeu seems straightforward enough, until you get to rebeu. Your first instinct might be to pull out your dictionary and look it up.

After all, rebeu looks like something you’d see in a Zola or Flaubert novel. Rebeu, however, means arabe (Arab). It’s verlan of beur, which is actually, in turn, verlan of arabe, making rebeu a doubly verlan-ed word!

Saïd: Toi non plus tu veux pas être le prochain rebeu à te faire fumer dans un commissariat !?
“You don’t want to be the next Arab to get killed in a police station, either!?”

Getting the subtle humor and subversiveness of this exchange requires knowledge of the perceived dynamics of racial identity in French society: Black, Jewish and Arab people often live alongside one another, and yet a strict division of their cultural identities is often maintained. Here, however, when Vinz, a Jew, says “me neither,” he puts himself in the position of his Arab friends, Abdel and Saïd. 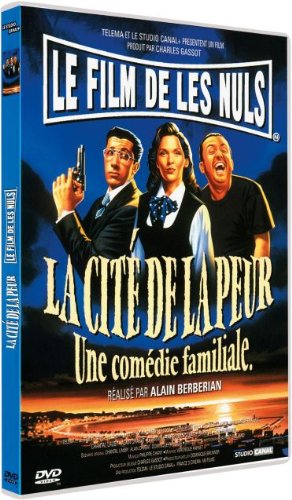 To give you some background, this 1994 comedy film was directed by Alain Barbérian and the script was written by a sketch comedy trio known as Les Nuls.

“La Cité de la peur” takes place during the prestigious 5-day Cannes Film Festival where Odile Deray, a press agent, presents a new film, “Red is Dead.” While the film itself is pas terrible (not so great), at each screening the projectionist is killed, using the same tactics as the villain in “Red is Dead.” The murders that surround the film, rather than the film itself, are what drive the film’s popularity.

“La Cité de la peur” chronicles the misadventures and hijinks of Odile, Simon Jérémi, the star of “Red is Dead,” and Serge Karamazov, an incompetent security guard. While the film is full of very specific French cultural references, it also parodies and spoofs American blockbusters like “Pretty Woman,” Love Story” and “The Terminator.” There are also several cameos from French and American actors and directors.

This exchange relies on the different meanings and usages of genre. On the one hand, it can be used in the same way it is in English, to refer to a particular style, class or type of art form. The genre of “La Cité de la peur” is comedy, for example. On the other hand, it can be used in the expression quelque chose du genre, which translates to “something of that sort” or “that kind of thing.” As in:

Genre can also be used as a synonym for à peu près, which means “approximately” or “more or less”:

By the way, bled, borrowed from Arabic, is a familiar word for quartier (neighborhood). It can also mean “hometown” or “home country,” and is often used this way.

Whew! Going back to “La Cité de la peur”: Simon switches between the two meanings of genre. Odile, on the other hand, understands only one throughout. She understands Simon’s use of genre to refer to “that kind of thing.”

3. “C’est arrivé près de chez vous” (Literally, “It happened near where you live”) 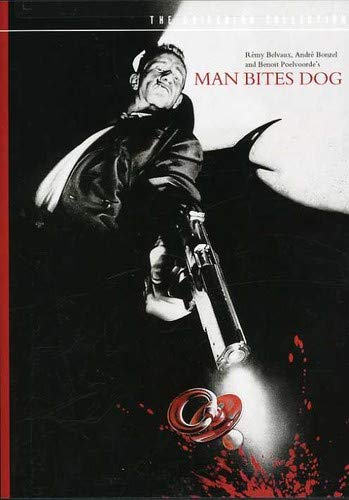 Okay, now for a doozy.

This one isn’t French—it’s Belgian.

“C’est arrivé près de chez vous” was directed by Benoît Poelvoorde, who also plays the lead role of Ben, a…let’s say…”eccentric” serial killer, who allows a camera crew comprised of Rémy Delvaux (who wrote the film’s actual script) and André Bonzel (the actual film’s producer), to follow him around. As the film progresses, the crew takes part in the killings along with Ben.

This is not a film for the faint of heart, but if you can get past the macabre details, Ben’s perceptiveness, his encyclopedic knowledge, his penchant for architecture and his stream-of-consciousness style rants make for really rich dialogue that artfully mixes slang with more formal French.

Take this monologue (starts at 1:07 in this YouTube clip—in the full-length film it starts at 15:20), known as the leçon d’urbanisme (city planning lesson), in which Ben is leading the crew through a residential neighborhood:

Okay, let’s break this down, shall we?

Ben is getting warmed up in the first two sentences, so they’re relatively easy to understand.

It’s worth noting that choquer and sauter aux yeux, literally “jump to your eyes,” are synonyms.

Then the free associations begin:

Here we see alors que, arguably one of the most versatile conjunctions in French, followed by la fléau de notre société. In French, fléau is often used figuratively to mean “plague,” “curse” or “bane,” as in “the bane of my existence.” We then see the verb foutre, which is a très familier (very informal) way of saying mettre (to put or to place).

Here, Ben continues to riff off the color red and of course, wine. From vin (wine), he makes the leap to pots-de-vin, which are not pots of wine but bribes.

Parce que tout ça c’est magouilles et compagnie, c’est politico euh… Je-ne-sais-pas-trop-quoi mais tu vois ça c’est des histoires de fric !
“Because all of that is scheming and the like (cheating, forgery, for example); it’s politico…uhh…I-don’t-really-know-what but you see, it’s all about money!”

Imagine! Of all the things that could make Ben, a serial killer, sad, the red bricks of an apartment complex are what manage do the trick!

So you see (no pun intended—okay, maybe a little)?

Pop in a few French cult classics, and in no time people will think you’re a native!