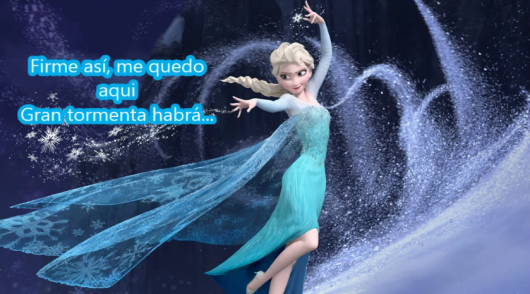 Let It Go: How Videos for Spanish Class Get Students Relaxed and Learning

There are so many roadblocks in foreign language education.

Foreign language students often feel like they can’t quite connect to the new vocabulary they’re studying.

As a teacher or tutor, you’re tasked with finding new ways to engage your students and help them interact with the language.

We all struggle with making foreign language accessible and relevant, while still being engaging and entertaining.

In my years as a classroom teacher, I’ve been constantly looking for new ways to make learning foreign language exciting and, as cliché as it sounds, fun for my students. I truly believe that when students are engaged and enjoying themselves, they’re much more receptive to learning, retaining information and applying it.

Every day, I was trying to incorporate new ideas in my classroom that might flip the Spanish switch for one more student. Once, on one of those crazy last days before break spent trying to keep the kids focused and still teach a lesson while their brains are already in Christmas mode, I had an accidental breakthrough.


Let It Go: How to Use Fun Videos for an Effective Spanish Class

I had been using various YouTube links to play short educational videos on some vocabulary and grammar-related topics when I came across links to cartoons, mostly short episodes of popular Disney and Nickelodeon shows, in Spanish.

The videos had Spanish voice-over or Spanish subtitles with no English. Of course, I knew those kinds of things were available, but it was the reaction from my kids when they saw familiar cartoons on the screen that took me by surprise.

There was no eye-rolling, no groaning over another lesson, no indication they felt I was trying to sneak some learning in by playing cartoons. They genuinely wanted to watch

Use Cartoons to Engage Your Students

Being familiar older cartoons, almost all of the students had seen the episodes before or had some idea of what was going on. But this time, they were in Spanish—that same old language they were always fighting me over and that I spent my days finding ways to keep them engaged in learning. They were actually begging to watch these cartoons, knowing full well that there was no English involved.

So, that’s exactly what we did. We watched the cartoons. And you wouldn’t believe how engaged they were.

I would pause the videos to ask what phrases they had caught, what they thought was happening and what words they might have questions about. The class would light up with comments that all came back to the same idea—couldn’t believe they understood what was being said without the English subtitles they were always telling me they couldn’t live without.

I could have told my students about my confidence in their language abilities. I could have reminded them that they had enough knowledge to figure things like this out if they were patient with themselves and willing to really listen to the Spanish to pick up on words and phrases they knew. I constantly told them all of that. But it didn’t click until they saw it for themselves in old episodes of the “Wild Thornberrys” in a new language.

Get Your Students to Relax and Learn

While I was planning for one Cartoon Friday, I found a link to the songs from the “Frozen” movie in Spanish on FluentU. These had Spanish subtitles so the students could sing along—I could even toggle on English subtitles when necessary and present definitions and audio pronunciations of Spanish vocabulary on-screen.

I could have planned for weeks to write an engaging lesson and never dreamed of it going over as well as this one. I printed copies of the Spanish versions of the most popular songs and the kids worked together to find differences between the Spanish songs and the English versions. We talked about translation and how things don’t have to match up word-for-word to still convey the same meaning.

It was a total breakthrough.

It was the light bulb the students needed to see that if the songs had been translated exactly word-for-word, they wouldn’t fit the music and wouldn’t make sense. Suddenly they all were beginning to understand what I had been trying to explain to them all along about translation.

After they worked with the lyrics, we pulled the desks into our semicircle around the projector screen and played the videos while the whole class sang along to the Spanish versions.

I heard the songs in the hallways for weeks after that lesson. I’m sure the other teachers weren’t exactly my biggest fans after that, but it was well worth the looks of exasperation from them to hear my students clearly singing the Spanish lyrics and, most of all, understanding them.

How to Use Popular Songs in Your Classroom

So I guess the point of this is, if you’re a teacher or a student, sometimes you really do just have to “let it go” and open up to different ways of learning.

It’s important to remember that you want to use a new language in real life, beyond your textbook or dictionary or too-technical language software. The books are important, that learning is important, but if you can’t make real-life connections and apply what you’ve learned, it’s all pretty much useless.

From a teacher’s perspective, I think we are constantly trying to stay “relevant” and tailor lessons to tap into the things that interest our students.

But it’s easy to miss the mark. It took some accidental YouTube links for me to see that more often than not, students do really want to learn, but they are just plain tired of the same old ways of getting there.

Sometimes a new path is exactly what they need.