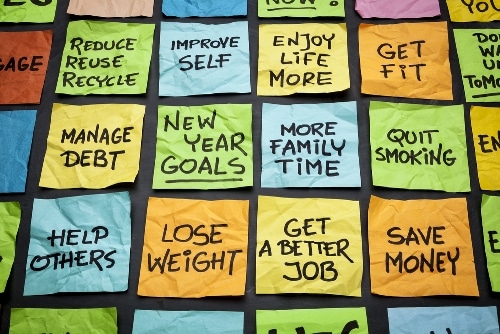 How to Teach Spanish Verb Tenses with New Year’s Resolutions

I swear I’ll go to the gym every day.

I’m going to start making my bed every morning.

We all promise ourselves a number of things when it comes to making New Year’s resolutions. The new year offers us an opportunity to make a change for the better.

What you may not have realized is that these resolutions also create the perfect opportunity to teach your students a number of Spanish verb tenses.

Holiday-themed lessons on language and culture captivate your students’ interest at the time when it can be most difficult—right before winter break. Don’t let them tune out early, simply adapt by involving the spirit of the holidays.

A festive approach to teaching your students the future tense is to ask them to write a list of their resolutions for the new year. Before the activity, introduce the topic of the future tense to your students. If they have already learned it, you can kick off the lesson with a quick review.

Next, ask your students to write down a list. If you are teaching both structures for the future tense (“Voy a dormir a las siete” and “Dormiré a las siete”), ask them to write six resolutions using each structure. Once your students have finished compiling their lists, it’s time for everybody’s favorite: conversation practice!

In order to practice other conjugations of verbs in the future tense, students should discuss their resolutions with their classmates. To ensure that they don’t convert practice time into socialization time, ask them to write down sentences about what their fellow students will do. For example, John can ask Sally, “¿Qué vas a hacer en el Año Nuevo?” and Sally can respond. Then, John will write down Sally’s response using the third person conjugation of the verb.

It is important not to bypass the first person plural conjugations. Nosotros is a subject that doesn’t like to be ignored. So, when a student encounters another student with the same or a similar resolution, ask them to write it down using the nosotros form. For example, “El año que viene, nosotros vamos a ir al gimnasio cuatro veces por semana.”

Not only does this activity teach a new verb tense and its conjugations, but it also teaches useful vocabulary. For example, there are many verbs associated with New Year’s resolutions, which your students may not already know. Now is the time to enlighten them.

I’m sure most of you Spanish teachers vividly remember the days as a student when you struggled trying to grasp the concept of what exactly the subjunctive is. Perhaps, like me, you still aren’t crystal clear on when to use it. Teaching the dreaded tense in fun ways can make it seem a little less scary, and much more approachable.

So, the above activity described for teaching the future tense can be tweaked to become practice using the subjunctive tense. Ask your students to practice using the often confusing tense to write down the things they do and don’t want to happen in the coming year. You can ask them to write as many sentences as you like using phrases like “espero que,” “quiero que” and “no quiero que.”

After writing their sentences, ask the students to make sentences about their classmates’ hopes, dreams and fears for the upcoming year. Doing so ensures that they learn and practice verb conjugations other than just the first person singular, yo. To wrap up the activity, ask your students to share one hope, dream, goal or fear of another student in front of the class.

Go to the gym! Eat more vegetables! Stop sleeping through your alarm! Write a novel!

The usefulness of teaching resolutions just doesn’t seem to end, does it?! To teach your students Spanish commands, ask them to tell others what to do for New Year’s resolutions.

First, ask your students to write what they like to do. After they have compiled a list, ask your students to pair up and tell each other what to do based on their likes and dislikes. For example, if student A writes “A mí me gusta escribir,” student B can reply, “En el año nuevo, escribe un libro.” Or, if a student writes, “No me gusta comer comida sana,” student B can respond, “Come más comida sana.”

Asking students to share what they actually want to do with their partners will, hopefully, prevent your students making snide suggestions like “Lose weight!” or a similar hurtful command. Make sure you listen to your students to make sure they are making appropriate suggestions.

The cherry on top of this sundae of an activity? Ask them to share some dreams of their classmates, and then make one mutual goal for the entire class. This will ensure they practice using, at least once, the first person plural in the command. For example, ¡Trabajemos juntos!

The preterite and imperfect tenses can be taught via New Year’s resolutions, too! I told you, the usefulness of this activity knows no bounds.

For the aforementioned verb tenses, ask your students to write about what they did last year. These can be positive things and goals they fulfilled, for example, “Yo fui a Fiji por una semana,” or “Yo comía verduras todos los días.” Or, they can write down negative statements, like “El año pasado, yo nunca comía comida saludable.”

After they have written your designated number of sentences, ask them to talk with their classmates and write down the things they did last year that they want to change. For example, “Max no comió comida saludable,” or “Max no fue al gimnasio.”

Wow, there’s a mouthful. And you thought the subjunctive was difficult! For particularly advanced students of Spanish, you can try to take on this difficult verb tense: the past perfect subjunctive.

To alter the resolution-themed activity to fit this tense, first ask students to write down some of their resolutions from last year that they didn’t fulfill. Next, ask students to explain how they could have stuck to their resolutions if things were different. For example, “Si yo hubiera tenido más tiempo, yo habría ido al gimnasio el año pasado.” (If I had had more time, I would have gone to the gym last year.)

As mentioned for previous verbs, ensure that your students learn the conjugations for more than just the first person singular by asking them to mingle and chat amongst themselves while writing about other students’ reasons for not completing certain resolutions. A New Year’s mingle party of sorts!

Other Tips for Teaching Spanish Verb Tenses with Resolutions

You should embrace the chance to teach your students not only new verb tenses, but also new vocabulary. Try to keep your students from sticking to familiar verbs they always use, ask them to use a different verb for each sentence.

Also, be sure to teach your students the conjugations of irregular verbs prior to starting the activity. If students know how to conjugate difficult verbs, they won’t avoid using them. After all, irregular verbs are the ones that students should practice the most.

Activities like these resolutions ones are fun and festive ways that can teach students practical uses of their Spanish. So, don’t wait until next year to integrate them into your class!