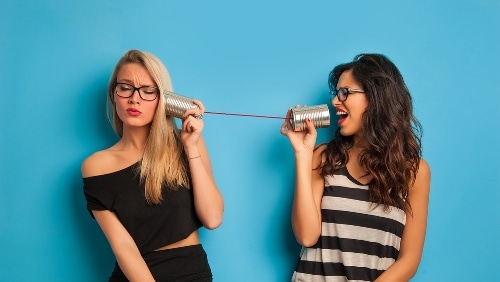 What’s the fun of learning Spanish if you can’t talk to people?

The goal is to communicate, make friends and experience the Spanish speaking world.

Your students won’t get to do any of that if they can’t hold a conversation.

Let me set the stage.

You’re out enjoying dinner on the town in Madrid, Spain, surrounded by boisterous Spaniards sipping drinks and nibbling a colorful selection of tapas. Spanish fills the air.

You understand the majority of the conversation, but when you open your mouth to contribute, you freeze.

This socially awkward scenario can happen all too easily to anyone who travels to, lives, or studies abroad in a Spanish-speaking country and didn’t practice conversing in the language substantially beforehand.

As a Spanish teacher, you have the power to prevent these situations by giving your students opportunities to practice advanced conversation in the classroom. This blog offers just a few of the many ways to bolster your students’ advanced Spanish conversation skills.

Some of us joined them for fun, others joined to boost resumes and still others rallied for purely social motives.

Now, we’ve got to get your students talking Spanish after class. Whether you’re talking to overachievers with 7 other clubs on their schedules or laid-back students with little desire make the extra effort, you have plenty of options for how to approach your students.

Below, we’ve laid out the major steps required to investigate your students’ after-hours situations and get them to go above and beyond Spanish class hours.

See what’s going on at school.

If you’re teaching ESL at a school with lots of after-school offerings, you’re probably aware of — or involved in — Spanish club, Culture club, National Spanish Honors Society, or some other club that fosters Spanish language learning. In this case, you can pitch these activities to students quite easily in class.

If you’re teaching ESL privately, with an institute or another organization unaffiliated with schools, you’ll need to talk to your students more about how they explore options at their own schools.

Get students motivated to attend.

So, you want your students to get involved in Spanish conversation after school? The first step that you as a teacher can take is to explain to your students why they’ve got to do this. Otherwise, they’ll simply wonder why they should spend their precious free time at a school-related activity such as Spanish club.

One great way to get your students involved is to get involved yourself, assuming you’re not already.

Create your own conversation club, if need be.

If the students lack the motivation to form an after-school Spanish club and there aren’t any existing options at the school, take the reigns and create one. This will allow you to make the agenda for each meeting of the group and keep the topics fresh and interesting.

The main focus of an extra-curricular Spanish club should be to make your students masters of Spanish conversation. Therefore, you should make a list of “club rules.” One of these rules should be speaking only in Spanish. This will make your students get creative with their Spanish in order to get points across.

Use technology to your advantage.

These can also be clubs outside of school where students can focus on different topics weekly or bi-weekly to practice conversation. You can suggest that your students join Meetup groups (which can be found at Meetup.com) to practice Spanish with others in your area.

Once again, attending groups such as those found on Meetup will show your students that you personally consider them worthwhile events to attend and not a waste of free time.

You can dedicate some time in class to showing your students the different meetup groups in the area. Some of them do entertaining outings such as trips to Mexican restaurants or bowling alleys.

2) Warm up the class with current events

Begin each class with a short block of time during which you and your students have an open discussion on current events in Spanish.

Get them excited about research.

Ask your students to read a news article every day (or at least prior to every class) regarding any topic of their choice. As long as it’s current, this warm-up activity will be fresh and interesting every day.

These can be current events from Spanish speaking countries or from any country in the world, as long as they discuss them in Spanish.

For their articles, students can use any news website they want, so long as it’s reputable. Feel free to throw in your own suggestions, too. For news from Spanish speaking countries, refer them to respected news sources like The Telegraph (for South American news) and The Local for articles on current events in Spain.

If you’d prefer that the whole class gets engaged discussing one single topic during this warm-up activity, instruct them to all read up on the same topic. You can either assign the topic or a specific article. Allowing them to all research one topic independently can turn out pretty cool, because students are bound to discover different information, opinions and perspectives as they investigate using their own preferred sources.

Quick thinking is what makes Spanish conversation the most difficult. When we’re out with friends and speaking in a language other than our native tongue, we often find ourselves freezing up. Putting your students on the spot a bit at the start of class during this warm-up activity will most accurately mirror this feeling they’ll encounter in future conversational situations.

A way to give this activity an interesting spin is to ask them to simply bring in a short article at the start of each class and have them discuss it in Spanish with a classmate. This will put their quick thinking and translation skills to the test.

Of course, you can add to this activity by asking your students to write down short summaries of the articles that they discuss with their classmates. However, if you’re solely using this activity as a warm-up and a way to boost conversation skills, keep it simple. Sometimes, asking your students to multitask will hinder their progress in conversation skills.

Practicing reading books in Spanish, especially ones we’ve already read in English, can be one of the best ways to pick up the language and enhance our vocabularies.

Have students reread their favorite books.

When it’s a story with which you’re already familiar, you often don’t need to waste as much time going back and forth from the book to the dictionary.

Outside of class hours, have each student read one of their favorite novels in Spanish. This should be one they’ve already read in English and know well, like “The Hunger Games,” “Twilight” or “Harry Potter.” Have the students form groups during class and discuss their chosen novels.

Of course, reading an entire novel in Spanish isn’t necessarily easy and takes a considerable amount of time. Therefore, assign your students one chapter or so a week.

Have them discuss this assigned section with their book club members at the end of each week.

This can be done in small groups drawn up based on skill level and preferred novels. You can also go ahead and assign one book to the entire class. The issue with the latter option is that it can be difficult to find a book that every single student has already read in English.

There are a number of websites offering discussion questions in Spanish to get your students’ conversations going. For example, the site 20 Minutos features a list of multiple choice questions about Harry Potter that your students can answer and discuss in class.

4) Give them real life scenario practice

Dedicate one class to having your students act out real life scenarios entirely in Spanish in groups.

For example, two or three students can act out going to a Spanish restaurant and ordering in Spanish.

A great example, as mentioned in the last passage and at the start of this post, is acting out a scene at a restaurant. This example works well as many of your students will find themselves doing this at some point in the future. When that time comes, they’ll be much better prepared thanks to your class!

Get students to use their imaginations!

For this conversation practice, first ask your students to break into groups of about 4 to 6 students. Then, hand each group Spanish menus like this one from different restaurants. Give them a chunk of time to look over the menus and pretend they’re at a restaurant.

As they have their discussions, it’s paramount that you ensure they’re all speaking entirely in Spanish. After all, Spanish conversation is the whole point!

You can also ask the students to imagine they’re at other venues. The possibilities are only limited by your (and their) creativity! Then they can have discussions with each other based on their imaginary venue. Another scenario could be a trip to the mall. For this, you can hand out floor plans of malls with the store names in Spanish.

You may even ask groups to take an imaginary trip to a museum where you give them paintings to discuss in their groups, or to a zoo where they discuss the animals they see. The nice thing about this activity is how customizable it is, so get creative!

By incorporating the above activities into your class, you’ll ensure that your students can contribute without hesitation to future conversations with Spanish-speakers.