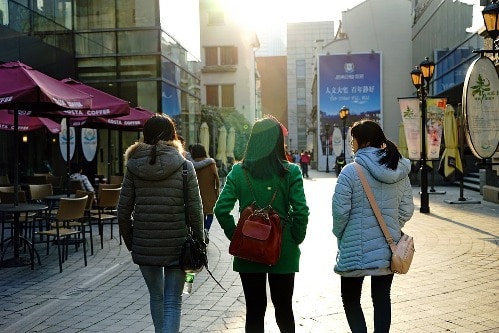 Lost in China? 30 Mandarin Chinese Travel Phrases to Help You Find Your Way

If you travel in China, you’ll be given this style of directions. Give them one quick read:

Now, close your eyes and repeat them. How did you do?

The reason you’ll get directions like these in China is that most names and signs are written in Chinese characters.

We generally use landmarks to get around, and when the landmarks have unrecognizable names for learners, the challenge of following directions becomes even greater.

Besides having landmarks that can be hard to identify, Chinese cities are huge—so it’s best to avoid losing your way.

In Shanghai, I once took a taxi from the airport to my brother’s apartment. We were mostly on the highway going about 50 mph (around 80 km/h). Throughout the entire 45-minute ride (with no traffic), I never left the city limits of Shanghai. It’s still the longest trip I’ve taken without technically ever going anywhere.

Now imagine getting lost in a city that big.

Without looking, repeat the directions at the beginning of the article. How did you do this time?

I got those exact directions from a friend I was staying with so that we could meet up for lunch.

When I left the apartment an hour later, I chose the wrong gate and walked 15 minutes in the wrong direction. While walking down the street, I asked a passerby for help in Chinese.

As I followed his directions, I passed a hotel and decided to confirm the directions with the concierge in Chinese. The concierge confirmed those directions but informed me that it was a 20-minute walk to the nearest subway station from where I was.

I decided to take a taxi to the subway station where I was supposed to get off. From there, I followed my friend’s directions and got there just as everyone was finishing their lunches.

What would you have said to the passerby? The concierge? The taxi driver?

Pronunciation is way more important that grammar. If you’re concerned about how to structure your “How do I get there?” question, forget it. Pronouncing the name of the place you’re going to is enough to you there.

Conversational Chinese is rather simple because complete sentences are often not necessary in conversation.

If a taxi driver asks you, “Is it okay if I take the highway?” you can say “sure” instead of a textbook “yes, you may take the highway.” Don’t worry too much about full sentences when you’re trying to get around.

Learn the names of a few landmarks that are close to where you’re staying. Banks, parks, intersections, restaurants, grocery stores, convenience stores, shopping malls, hotels and schools can all serve as points of identification.

The names of two or three of these will be more than enough to help you describe how to get back to where you’re staying. Obviously, landmarks are in lieu of a street name, which is the best information you can provide.

If you’re lost and can’t handle all the walking directions you were given, find a place to regroup. Many local and Western places—such as Starbucks, McDonald’s, Burger King, etc.—often have free WiFi, which can be useful if your map app works abroad (some don’t) or if you need to contact a friend or look up directions online.

Who Can Help You Find Your Way?

Mandarin Chinese is often (though not always) the second language of taxi drivers. In major cities, many drivers come from smaller towns and farming areas nearby to work in the city and support their families, so their mother tongue is often a local Chinese dialect.

You might be nervous about pronouncing your destination, but they’ll listen very carefully since they also don’t want to take you to the wrong place. Taxi drivers will ask you where you want to go before allowing you into their car, so don’t be surprised if they don’t let you in right away.

If you’re nervous about communicating with your taxi driver, there’s a simple solution: Download the DiDi app for iOS or Android. DiDi is China’s version of Uber or Lyft, so when the driver picks you up, they’ll already know where you’re going.

Almost every bus driver knows every stop and every associated landmark along the route. Many either drive different routes or are familiar with other routes that overlap theirs.

Before getting on the bus and paying your two 块 (kuài – bucks, as in dollars), ask the driver if his route passes that certain street or landmark you’re going to. If it does, he’ll remember to tell you when to get off. If the route doesn’t go there, he’ll let you know which route to take.

Try downloading Moovit for iOS or Android to view bus routes. These will make your trip a bit easier!

Electric scooter taxis are the quickest and most adventurous taxis in China. These drivers are the most landmark-based of all. They’re great at finding popular spots you want to go to. If your destination isn’t a popular spot, they may not know it, but they’ll at least get you very close (usually within eyesight of your destination).

Like taxi drivers, the scooter taxi drivers will also ask where you want to go before allowing you on the bike. They’ll also negotiate a fee before they let you get on.

This scenario usually only happens on the bus or subway as taxis are generally not shared. If your destination is a popular spot, anyone can point to the subway map and help you count out the stops.

On a bus, a fellow passenger is more likely to point out which stop to get off at when you get close to it. If you try to pronounce the name in Chinese, anyone who hears you will help, so you’ll likely have four or five people intensely pointing and communicating when your stop is nigh.

Pedestrians are many. If you ask someone and don’t understand everything, go where you can and ask someone else.

The challenge may be that different people have different ways of getting you where you want to go, but that will only familiarize you with your surroundings, giving you more landmarks to use to your advantage.

30 Chinese Travel Phrases for Going There and Back Again

The phrases below are in their simplest forms. They aren’t word-for-word translations. Like most everyday conversations, they use the fewest and most necessary words to convey the speaker’s idea. Fewer Chinese words to remember alleviates pressure.

多少钱? (duō shǎo qián?) – How much? (for vehicle taxis, this question should come at the end)

Now you have all the Mandarin Chinese travel phrases you need to get around.

Can’t Understand Chinese? Improve Your Chinese Listening Skills Actively and Passively
Easy Chinese Short Stories: How to Find Them and Learn from Them