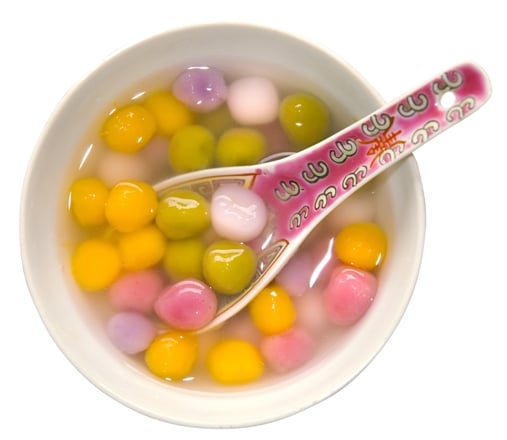 There’s a major Chinese holiday almost as important as Chinese New Year coming up—do you know about it or celebrate it?

It’s Chinese Winter Solstice, which marks the pinnacle of the winter season.

There are many traditions around Chinese Winter Solstice, and many excellent opportunities for language learning!

Learn important cultural and linguistic points surrounding this holiday. For example, what foods are eaten at Chinese Winter Solstice? What is the meaning and significance of this holiday according to Chinese philosophy?

Winter Solstice, or 冬至 (dōng zhì), marks the shortest day of the year, that is, the day with the least daylight for the Northern Hemisphere.

The Chinese commemorate this day during the 11th lunar month, which in Western calendars falls between Dec 21 and 23.

Yin, Yang and the Significance of Winter Solstice

Winter Solstice carries much significance within Chinese philosophy. In Chinese beliefs, yin and yang 阴阳 (yīn yáng) are the balancing forces of life and the universe.

The yin 阴 (yīn) force of darkness and cold is most intense during Winter Solstice, the darkest and shortest day of the year. But following this day, the force of yang 阳 (yáng), representing light, begins to grow.

In this way, Winter Solstice is a day for hope and optimism.

How to Celebrate Winter Solstice

During Winter Solstice, people generally gather together for a big meal. Some people may get off work early to go home and be with family.

Beyond these food traditions, there are many more facts to know about Winter Solstice. Let’s take the challenge of learning them in Chinese.

Here are 14 different ways to talk about winter solstice in Chinese. Learn these simple Chinese phrases, and know more about Chinese history and culture at the same time!

Although many Westerners know about Chinese New Year and Mid-Autumn Festival, Winter Solstice is another major event for many Chinese families and a special time for family gatherings.

One very interesting fact about Winter Solstice is that many Chinese consider this day a universal birthday.

The passing of Winter Solstice marks the start of a new solar term circulation. After passing this day, everyone is counted as growing one year older. Therefore, Winter Solstice is called “亚岁” (yà suì) or “Asian birthday.”

The Chinese have known how to calculate solstices since around 700 BC, or during the Spring and Autumn Period in Chinese history. During this era, the Chinese used an ancient sundial called 土圭 (tǔ guī) to observe the astronomical changes in the seasons.

The Chinese are not the only culture that observes the Winter Solstice. In northern Europe, Winter Solstice, or “Midwinter,” is celebrated as a holiday called Yule.

As Winter Solstice is a time for family gatherings and group meals, food is a very important part of this celebration. Many warming, filling foods are eaten during this time, including meat, soups and, of course, dumplings.

There’s a special reason why this dish is eaten at Winter Solstice. The name 汤圆 (tāng yuán), for glutinous rice balls, sounds like “getting together,” which is 团圆 (tuán yuán).

Different parts of China have slightly different traditions. In some parts of China, people drink mutton soup during Winter Solstice. Mutton soup is believed to promote vitality and keep the body warm.

In ancient Chinese culture, Winter Solstice is a time to commemorate ancestors and to worship the heavens. On this day during the Tang and Song dynasties, the emperor would conduct a heavenly worship ceremony while the commoners remembered their deceased family members.

Winter Solstice is an auspicious day, so some consider it appropriate to wear new clothes.

This belief is part of the reason why Winter Solstice is such a significant holiday.

Although Winter Solstice was extremely important in the past, with ceremonies for worshiping the heavens and remembering ancestors, nowadays it is mainly a special day to gather with family.

Traditionally, Winter Solstice is a time for rest and renewal.

Foods—along with their benefits and associations—play an important role in Chinese culture and many Chinese festivals.

According to legend, dumplings were invented by a compassionate doctor who, after witnessing the suffering of villagers in the cold, ordered his servants to make dumplings stuffed with meat to distribute to the poor.

And those were 14 quick and easy Chinese phrases about Chinese Winter Solstice that also include many historical and cultural highlights.

We hope you have a great holiday!

16 Wintry Chinese Adjectives to Describe Cold Days and Colder Nights
Your Shortcut for Learning to Read in Chinese: 15 Common Phonetics and Radicals