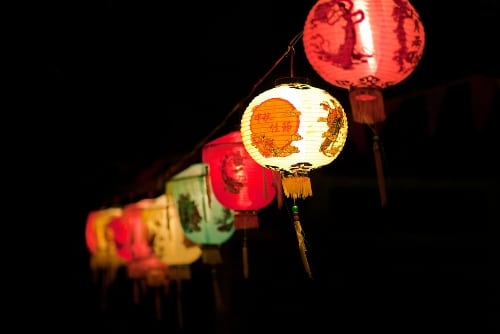 Do You Know These 7 Fascinating (and Freaky) Facts About Chinese Halloween?

If you don’t believe me, check this out—it’s all about Chinese Halloween, also known as Ghost Month, or Hungry Ghost Festival.

Look out for restless spirits wandering among the living, making visitations to their descendants.

And ghosts are expected to come. Food and other offerings are left out for ghosts to enjoy.

All this spookiness lasts not one or two nights, but an entire month.

Sounding scary already? Fear not as we launch into a tour of Chinese Halloween, and learn 14 new phrases to go along with it.

What Is Chinese Halloween?

Whereas Western societies devote a day to ghostly festivities, Chinese have a whole month reserved for remembering spirits and the dead. Chinese Ghost Month happens during the seventh month of the lunar calendar, which usually falls sometime in August.

According to traditional beliefs, the gates of hell are opened during the seventh lunar month, and hungry ghosts roam the realm of the living. This occasion is known as 盂兰节 (yú lán jié), also called 中元节 (zhōng yuán jié). In English, it’s called Hungry Ghost Festival.

Why Are the Ghosts Hungry?

Souls who were not ready to leave the earth, who did not receive a proper burial, or who were mistreated by their families become restless, hungry spirits. These are the hungry ghosts that return to disturb the living.

Some say that hungry ghosts return to pay visits to their descendants.

Whether or not you bump into your great-great-grandfather during this spooky month, Yu Lan Jie is a time for Chinese people to remember their ancestors.

To appease hungry ghosts and send them back to where they came from, Chinese people perform certain rituals.

What Happens During Chinese Halloween?

Rituals performed during Ghost Month include burning paper money in tin cans. This is called 烧街衣 (shāo jiē yī ). The papers burned include hell “bank notes” and representations of desirable items like cars, houses and luxury goods. It’s believed that when burned, these money and goods are transferred to the dead for their use in the underworld.

Paper offerings can be extremely elaborate (like these). There are huge paper mansions, complete with paper furniture and servants. You can be sure to find the latest electronic gadgets in their paper versions as well.

People also leave food offerings for the ghosts, such as by laying out a small pile of fruit, meat or pastries on the side of the road. It’s also common for people to visit temples to burn incense and pray for the dead.

Candles are lit to help ghosts find their way back to where they came from.

How Did Chinese Halloween Evolve?

Ghost Month is deeply tied with Chinese values of filial piety, that is, respecting ancestors. In Buddhist legend, a monk named 目连 (mù lián) envisions his mother’s spirit suffering in hell and endeavors to deliver her with the help of other pious monks.

How Do People Celebrate Chinese Halloween?

To celebrate Ghost Month, Chinese opera is performed on makeshift bamboo stages, in order to entertain both the living and the dead. These Chinese operas are called 神功戏 (shén gōng xì) and they tell the stories of Chinese mythical deities.

There are many superstitions surrounding Ghost Month. For example, you should not disturb offerings that are left out for ghosts.

You might not want to hang laundry outside; ghosts may try on the clothes and leave behind their negative energy.

Swimming and other water sports are to be avoided since ghosts of the drowned may pull you under. And don’t urinate on a tree;  it can offend the spirit inside.

Of course, stay away from the woods at night. In fact, avoid going out at night at all. Especially, don’t take photos at night—you might capture a ghost in the image.

You may also want to consider postponing important business and weddings during this unlucky month. Remember not to talk about ghosts too, in case of offending them.

What’s Good to Do During Chinese Halloween?

Other superstitions dictate things you should do during Ghost Month. For example, keep lights on at home and outside the home, because ghosts like to hide in the shadows.

Sprinkle salt outside the front door to ward off evil spirits. Visit temples to pray for the deceased, and make food and paper offerings to appease hungry ghosts.

Hearing all these ghostly rituals and superstitions may leave you a little spooked. Chinese Ghost Month beliefs may seem a tad creepier than the costumes and candies of Halloween. But armed with these new phrases, you’ll be fearless to explain the ins and outs of Chinese Halloween!

10 Useful Chinese Words to Spoon Out into Everyday Situations
How to Read Chinese: The Newbie’s No-stress Guide