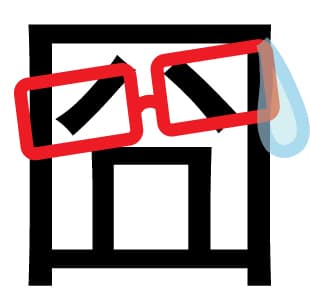 Slang for Feeling Down: 囧

When I first came across this, I couldn’t tell if this was a real character since it looked so different, just like a smiley face (more like a crying face).

For the non-Chinese language learner .. I guess this would be a great example of Chinese characters looking “just like pictures.”

Ironically, 囧 originally means “bright.” However, now a days it means something more along the lines of emoji the character resembles.

Sad, depressed, helplessness, disappointed, or the general “blah” or “ugh” feeling we have whether it’s because we spilt some coffee on our shirt and it’s only 10AM or we’ve just locked our keys in the car.

Slang for Feeling Down: 囧

This word became a popular slang word from Taiwan’s BBS community and spread quickly to mainland China, and then Hong Kong. It was especially popular on the internet.

囧 is said to be one of the most popular symbols of the 21st century. It became part of the news and even the movie and advertising industry. Here’s one example where it’s part of Joseph Gorden-Levitt’s name!

One way people write 囧 with symbols is (kind of like how we use “:)” as a smiley face in English):


This word can mean a multiple of different things depending on the situation and what you want to say. On the internet, it usually expresses some kind of sadness or helplessness. However, it could also mean humor or describe one’s mood.

Let’s take a look at some examples found in the wild!

Lessons in Learning Chinese: Michael Knight
Clearing Up Your Behind: 然后vs之后vs以后

2 Responses to Slang for Feeling Down: 囧