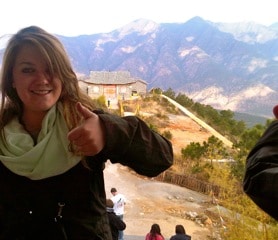 This week on our Lessons in Learning Chinese series, we’re featuring Kerrijane Wennberg. In addition to taking Chinese classes, she lives in Beijing now. She gives some great tips with some funny stories about her learning experience.. like what happens if you strike up conversations with taxi drivers.

In her own words:

I am 24-years-old from Huntington, New York.  I studied Political Science and two years of Chinese at Bucknell University.  I spent the spring semester of 2010 doing a language intensive program at the Beijing Foreign Studies University (北京外国语大学).  After graduating in 2011, I returned to Beijing to work at Beihang University (北京航空航天大学) where I teach “Western Culture” to Masters and PhD students.  This is my final semester in China, as I am beginning graduate school in the fall.

I began studying Mandarin in September 2008, my sophomore year of college.  I did a total of four semesters of Chinese at Bucknell.  I also spent the spring semester of my junior year studying at the Beijing Foreign Studies University where I did a language intensive program through IES Abroad. Because I am teaching English, I rarely, if ever, speak Chinese at work.  However, on the weekends I make an effort to open up my old Chinese textbooks to try to maintain my skills.

My reasons for studying Mandarin in the first place are quite simple.  I have always loved studying foreign languages.  Furthermore, it is my intention to study international law, and knowledge of Chinese could prove to be most useful.

I wouldn’t say I have a particular philosophy for studying Chinese.  I try to approach it as a hobby I enjoy rather than a chore.  Of course studying Mandarin is not always fun, but I have to remind myself of how exciting it feels to be able to have an intelligent conversation in Chinese.

I have found that just writing and writing until I have a word or phrase memorized is most helpful for me.  If I have trouble recalling a vocabulary word or character, I will write it down 20 times, or however long it takes for me to remember it.  Most importantly, I think the only way to truly learn a language is by using it as much as possible so I try to speak with the locals whenever I can.

I have found that speaking with Beijing cab drivers is a great way to practice Mandarin.  The drivers in Beijing are often friendly and interested in talking with foreigners.  I love doing this because, not only do I find it helpful, but also because the conversations are typically entertaining.  For example, this past weekend I had a cab driver singing “对面的女孩看过来” to me after asking me what my favorite Chinese song was.  In general, speaking with the locals is probably my favorite aspect of studying Chinese.  It’s a great way to improve your Mandarin while also learning a thing or two about the culture.

During my last semester of Chinese at Bucknell, my professor would often have us prepare debates for class.  I found this activity not only helpful but also fun, as we would discuss pertinent social issues in China.

Based on my own experience, I think the biggest mistake you can make while studying Chinese is being self-conscious about speaking the language.  When I first came to Beijing to study, I was admittedly cocky about my Mandarin.  Because I had done well on my written Chinese exams, I made the mistake of thinking I could actually speak the language.  However, when I arrived in Beijing I was saddened to find that none of the locals could understand me.  I was then embarrassed and afraid to use my Mandarin.  I would allow my classmates who did have good Chinese speak for me.  I soon realized what a mistake this was because my Chinese was not making any progress.

I finally forced myself to use my Mandarin when out in public.  It took no time for me to get over my insecurity, and my Chinese began to improve significantly.  In retrospect, I feel silly for having felt nervous about speaking the language.  All of the Chinese people I have interacted with have been nothing but patient and encouraging.  So, my biggest suggestion is to use your Chinese, no matter how limited it may be.

I find that when all else fails, just say “马马虎虎” (OK, so-so) because it’s relatively vague.  Of course I use “不好意思”(to be embarrassed or sorry) all the time.

I had one really embarrassing moment happen shortly after I first arrived in Beijing.  I went to a 包子(meaning a steamed bun) stand for lunch.  However, I must have been distracted, because I confused the word 包子, pronounced baozi, with 婊子，pronounced biaozi (meaning prostitute).  So, instead of saying “我要三个包子”(“I want three steamed buns”), I said “我要三个婊子”(“I want three prostitutes”).  The Chinese women behind the stand looked horrified at first, but then started laughing.  Luckily, they understood it was a harmless mistake.  I made sure never to confuse the two words again.

I was in a cab on my way to the airport, heading home after finishing my semester at 北京外国语大学.  My cab driver was talking to me about all kinds of things and asking me questions.  At one point we were discussing China’s One Child Policy.  After the hour-long drive to the airport, he gave me a hug, wished me luck and said, “再见朋友”(“Goodbye, friend”).  It then occurred to me that I had been speaking Chinese for an entire hour without any problem.  This was definitely an “Aha!” moment for me.

I think of those “Aha!” moments like the one I mentioned above.  Whenever I find myself feeling frustrated, I remind myself of how much I enjoy the gratification of being able to have a conversation in Chinese.

Probably 蔬菜饺子 (vegetable dumplings), which I recognize sounds a bit stereotypical.  I also loved the food in 云南 (Yunnan Province).

Start looking for jobs in China.  Seriously.  If that is not feasible, I would suggest finding some Chinese or Chinese-speaking friends to practice speaking with.

Thanks Kerrijane for those tips and a few entertaining stories! Speaking with cab drivers always DO make for an interesting conversation. A great point – that is, to just speak & you’ll get better. You can connect with her on her Linkedin.