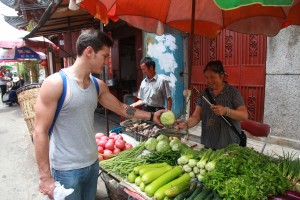 This week on our Lessons in Learning Chinese series, we’re featuring Anthony Pagino! What’s really interesting is that he’ll offer you tips, stories and his experiences from being a student to being a street food hustler in China! I don’t think many can offer stories from the perspective of vending to Chinese locals and tourists, definitely some great insights!

In his own words:

My first Chinese name was a transliteration of my English name 安东尼. It may work for Carmello Anthony, but not for me. I needed to take action to get a real Chinese identity and after a close call from the local tourism mafia gang and being born in the year of the tiger, my Chinese name became 小虎. I’ve spent 4 years in China during which I’ve done everything from studying abroad to having my own street food stand selling American style omelets! Now I’m publishing an iPad guidebook designed for independent travelers and language learners who want to get way out of their comfort zone in China March 27th. I also have a personal website that you can check out here!

I first started learning Chinese around Christmas time in 2007. I remember shouting “圣诞快乐!” to some Chinese folks on my college campus. I was studying economics at the University of Florida. From the research I was doing regarding the Great Leap Forward (大跃进) and the Urban/Rural Housing Registration System (户口), I became perplexed between the old school and new Chinese model of growth. China was and is the opposite of what I was being taught in school.

The unsustainable economics was just the beginning of the rabbit hole and I soon became curious about Chinese politics, history, and culture. The more I talked with Chinese people about these subjects, the more apparent it became that I needed to learn Chinese so I could uncover more of this riddle. I had to dive deeper.

Do you have a certain philosophy for how you approach learning Chinese? Do you have any grand想法s about it all?

Learn by centering your language environment around your own specific hobbies and interests. For instance, in 2009 when I was living in Henan, Zhengzhou I took up martial arts, practicing with 6-8 years olds after school. Not only was I learning some fun language like 蹲，踢，and 马步, but I was also getting to interact with other people who shared that interest making a lot of friendships along the way with both the kids, the parents. Whatever your specific passions are, find some Chinese friends that don’t speak English, but who you share that common bond with you. You will not only have a social network, but also a badass vocabulary arsenal of specialized and localized words.

What aspects of studying Chinese do you enjoy the most?  (this can be specific study resources, methods, activities, social aspects etc)

I like learning characters from street advertisements. I absorb and internalize information better with the characters in context. Something that my visual memory can hold onto. I also have fun using 微信 (Wechat) to connect with friends far and near.

For face to face interactions, I like chatting up street food vendors, bike repairmen, and taxi drivers. Anybody who is willing to share really. It’s amazing the perspectives you get on life and the word from unexpected people. This underscores the fact that in China, everyone is your teacher.

Don’t go near grammar at first. Start with short basic phrases that are high frequency e.g. restaurants, transportation, anything with transactions. The grammar is already built in to these phrases, and over time you will begin to subconsciously know where to put your verbs, nouns and whatnot.

“爽死了!” – It feels sooo good. I often times shout this out after taking the first sip of an ice cold 雪碧 Ahhhh!

For about 3 months last summer I was 小吃摊ing. I operated a mobile food cart in Dali selling American style omelets, known as 小虎牌煎蛋饼, to eager Chinese tourists. There was something powerful about changing Chinese perceptions of what “foreigners” are capable of. Even though it was really hard work and a difficult task to convince people in Chinese to buy my omelets it was a great experience and I made a lot of unlikely friends along the way.

The most memorable incident was when the resident Dali dumpling master came up to me one night after a dismal selling session. He and his wife had moved from Tianjin to Dali to spend their days in semi retirement making 手工饺子. Their little shop was by far the busiest place in town admired by both Chinese and westerners alike. As I was disassembling my setup he walked across the street from the storefront and in all seriousness facing me directly, clasping his hands together in front of his chest he said “我知道你做这样的生意真不容易。小虎，我很佩服你!” I was stunned. I felt like that compliment had validated all of the handwork and sacrifice I had undergone over the previous 4 years to learn Chinese and to understand Chinese culture.

In 2008 while studying abroad in Beijing I successfully ordered a meal at McDonald’s from start to finish in Chinese. The attendant was asking in rapid fire succession, and I was answering every question just as quickly. I had failed many times before at this test, succumbing to frustration and a lack of preparedness. But not this time. “I do want fries to go with that Big Mac meal. I do want a large coca-cola. I do want to eat it here, and yes, I do want extra ketchup.”

Yunnan has a specialty called 饵丝 It is a stringy noodle made from steamed rice. A great breakfast or lunch snack. 腾冲 has a distinct thin style that may be better than the rest.

Get a weibo account and feel free to add me @小虎老外. Also if you would like to experience the future of digital travels guides or free, we’ll be giving away a copy of the iCuriousTravel: A Cultural Guide to China to one lucky reader with an iPad. To enter, write you response to the following question below.

“Why travel to China?”

The most thoughtful answer takes the prize. The winner will be announced on April 21st. Thanks for reading!

Thanks Anthony for that great story about omelets in Dali and McDonalds. It’s always great to learn Chinese in context, like he said, it sticks more!